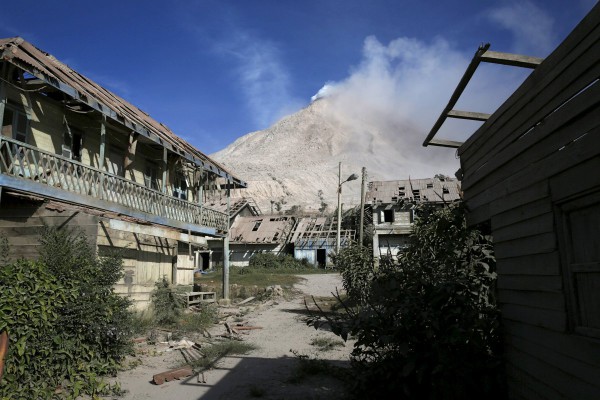 The city of Pompeii in Greece wasn’t the only city that fell victim to a volcano and its ash.  A village and its people in Indonesia is still picking up the pieces and trying to salvage as much as they can from the destructive volcano.

Mount Sinabung erupted almost five years ago and there is still evidence of the event.  There are crumbling houses, vehicles that were never moved and are now overgrown with vegetation, and many house utensils covered with layers of ash.  Some villagers were forced to abandon the village completely due to the mess and destruction.

It is said that when the volcano started getting active in 2010, it hadn’t been active for over 400 years.  Some of the photographs that were taken of the mess are a terrible reminder of what many people lost.

The volcano measures almost 8,070 feet tall and had been erupting on and off for the past five years.  The first time it erupted last year, it killed 17 people.  During the 2013 eruption it buried the Bekerah village.  And last year, Suka Meriah fell victim to the volcano.  Residents of six other villages were forced to evacuate due to the potential dangers.

In a mere 4.3 mile radius, more than 30,000 people had to evacuate.  The volcano was declared too dangerous to allow people to continue living in the area.  Today, there are still over 6,000 people who are living in shelters.  They are either being put up by their government or have been forced to live with relatives.

The first photo shown is one village that is beneath Mount Sinabung, with the volcano towering menacingly above the village. The second is of a stereo coated in dust and ash.  It was still in the spot where its owner left it after abandoning his or her home.  One home that was photo-captured has been abandoned for so long that its roof caved in and vegetation has started growing inside.  Like many homes and buildings, this home has been left to rot.  The third photo is a bit eerie.  It is of a “home” that was left like others.  However, all that is left standing is the door.  All the other surroundings have fallen into a pile of rubble.  The volcano is still smoking in the background of the doorway.  A person can see the ash flowing down from it. 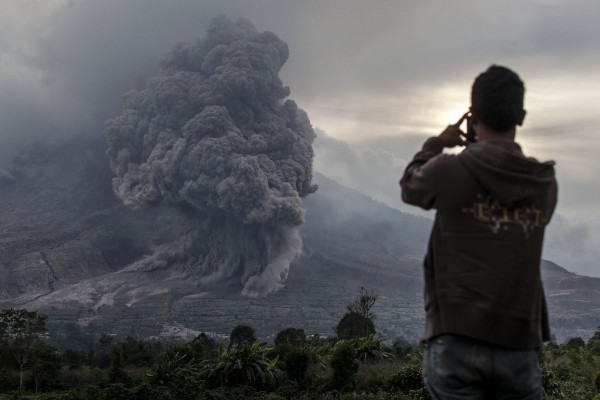 At 2,460 metres high, Mount Sinabung is intimidating on the best of days, let alone during an eruption. This man watches the dramatic scenes unfold from a distance. source

A fourth photo was taken in 2010.  The lava is burning down the side of the volcano, with bright orange and red fire slowly oozing.  Another photo is of the inside of a home where a clock and mirror were left behind.  Again, there is vegetation that is starting to grow on the inside from the owners being gone for so long.  There is a school that was photographed; this building did not fare as badly as others.  The papers and newspapers found inside are still bright white and untouched.  Sandals and crops were left as is.  Unfortunately, many of the villages relied on the villages’ sole income – harvesting coffee crops.  Without the crops, who knows whether or not the people will be able to make it back to the villages?

Some local farmers look on during the 2014 eruption.  Thankfully, their village and farm is far enough away from the volcano that they did not have to evacuate.  However, the plume of smoke still fills the sky. Another is of a padlock with a plant growing right through it.  Although it is a very simple photo, it shows how quick the villagers fled and just how long they have been gone. 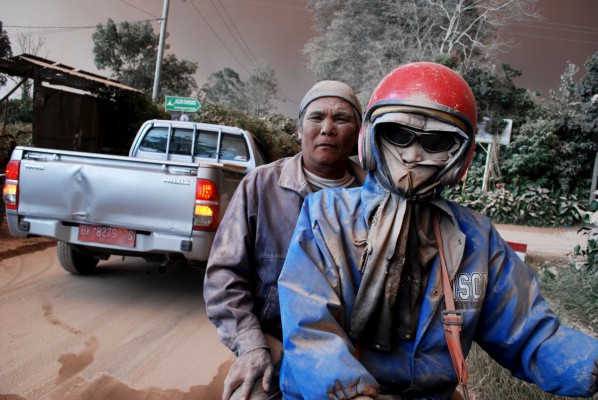 These residents of Sukandebi village are covered in ash as they ride on a motorcycle as Mount Sinabung volcano erupts.source

A cemetery with bright stones and tombs can be seen through a layer of ash.  A photo of the last supper was not covered by any ash at all.  The picture is vibrant through the gray ash.  A truck full of lumber left by a worker was left abandoned and it is now turning yellow from the rust and ash.  One house that was abandoned has a photo of a woman in it; it’s eerie to wonder whether or not she survived. It makes one wonder what people’s lives were like.

One villager who still has to rely on his crops for income wears a mask from all of the ash that is on his tomato fields.