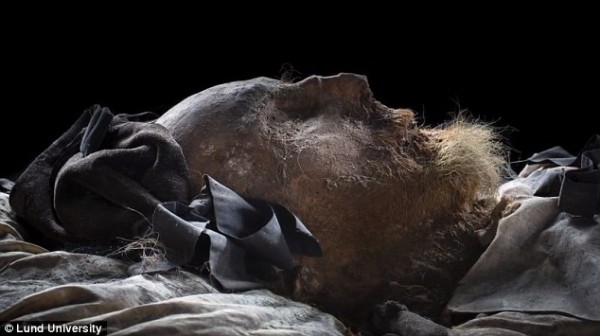 After scientists and archaeologists found a body of a Bishop, they exhumed it and have been researching it and studying it ever since.  Why?  This Bishop is 400 years old and is the best-preserved body scientists have ever found.  The whole body is still intact and one can see his face fully.  Scientists say that the body is of Bishop Peder Winstrup.

What most of the scientists and archaeologists hope is that they can finally get a look into the past by studying the Bishop’s remains.  They want to see what life was like in the 1600s.

Scientists found the Bishop in Lund, Sweden and believe he lived there from 1605 until his death in 1679.  The bishop was laid to rest nearly 336 years ago and was found in a crypt of Lund Cathedral.  After viewing the body, the scientists say that his body is the best-preserved of the Bishop’s time.

In order to tell just how great the preservation of his body was, the scientists had to open his coffin.  Using some of their technology, they were able to get a good look at the whole body.

The scientists actually discovered that the crypt and coffin had been opened a couple times since his death, and his body photographed. The photograph, in black and white and taken a century earlier, revealed that at that time his clothes were perfectly preserved and even his beard remained on his face.  The photo was almost an exact replica of the portrait of the Bishop many scientists have used in their study.

As scientists looked further into the tomb they found a body of a baby at Winstrup’s feet.  After getting a closer look at the body, they believe it may have been a fetus or born prematurely.  This was the first time anyone had found the baby, even after the other scientists had investigated the tomb. Some academic researchers believe that the child could have been merely slipped into the coffin while no one was looking and before the tomb was encrypted.  This would suggest that the baby was probably born out of wedlock and the mother wanted the child to be buried in holy ground. 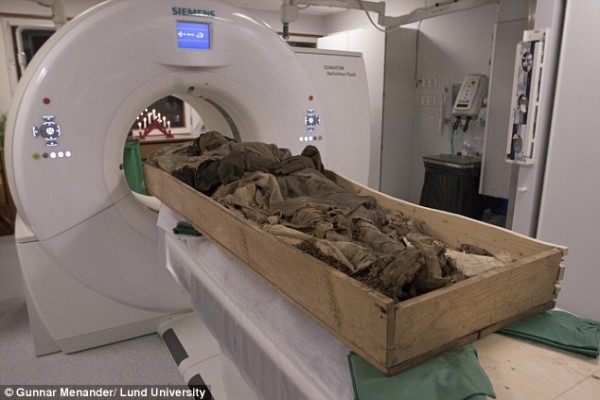 Researchers used CT scans and X-rays to study the remains of the Bishop Winstrup after he was removed from his crypt. Image credit@ Lund University

One scholar and scientist says that Bishop Winstrup was the founder in 1666 of Lund University, which is still known as one of the top 100 universities worldwide. Bishop Winstrup was appointed the Bishop of Lund in 1638 and still held the title when the region transferred from Danish to Swedish control. Scientists believe he died from pneumonia, which was most likely sped up by gout, arthritis, gallstones, plaque in his heart, and possibly tuberculosis.  They also found that his teeth were badly rotted by sugar, which means he was a wealthy man since sugar in the 1600s was an expensive delicacy.

One scientist on the project, Caroline Ahlstrom Arcini, studied his gallbladder.  She found many stones, which suggests he ate a lot of fatty foods.   He also had sustained an injury to the tendons in his shoulder which would have made everyday activities difficult.

The most surprising thing of all when it came to researching his body was that he wasn’t embalmed; all his organs were still in his body.  What could have helped delay the decaying process was that the bishop was buried on a mattress that had herbs, juniper, and wormwood in it. His head had been laid on top of a pillow filled with hops; some scientists believe that these herbs could have interrupted the decomposition process. Even today his clothes are very well-preserved;  although faded, they do not have a mark of decay on them.