Every new discovery that we make about early humans changes the way we perceive ourselves as species. The story of how we came to be gets rewritten every time when archeologists find new evidence about our early existence. Although we are certain that our earliest ancestors originated in Africa, the path of their migration is still a question for debate.

Few months ago, researchers have discovered 47 human teeth in a limestone cave (Fuyan Cave) in Daoxian County in Hunan Province, South China. This is one of those findings that rewrite the story of how our ancestors migrated from Africa. Archeologists who worked in Daoxian claim that these fossil teeth belong to Homo Sapiens and that they are between 80,000 and 100,000 years old. Besides the teeth, there were also the remains of hyenas, extinct giant pandas and dozens of other animal species fossils in the cave, but no stone tools. This indicates that humans never lived in the cave, the remains were probably brought inside by predators. 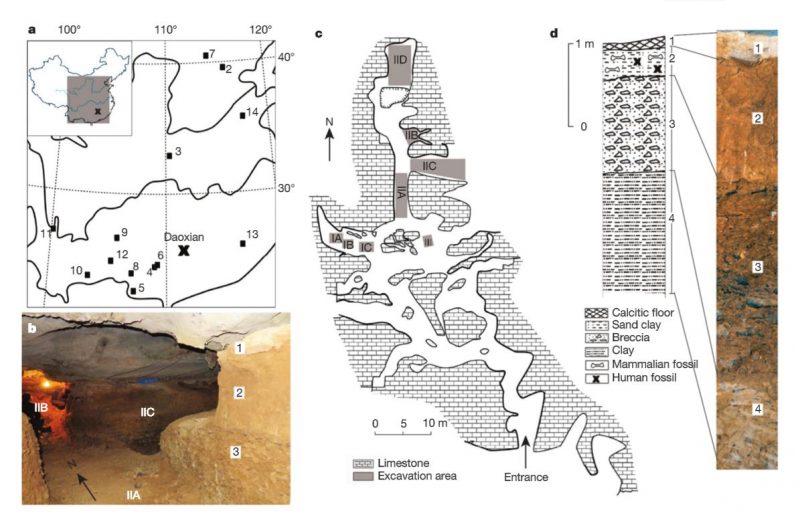 The location and map of the interior of Fuyan Cave. / Image credit: Y.J. Cai, X.X. Yang and X.J. Wu

It is conventionally accepted that the first migrations of anatomically modern humans from Africa started only 50,000 – 60,000 years ago. This new discovery from Southern China places this event at least 30,000 years earlier. This is not the first case of finding older traces of Homo Sapiens remains outside of Africa. There are also fossils found in the Skhul and Qafzeh Caves in Israel that are around 100,000-year-old. Scientists previously thought that this only proves there was an unsuccessful try for a wide-scale migration to the East, and nothing more.

Chris Stringer, a palaeoanthropologist at the Natural History Museum in London, one of those who argued that fossils from Skhul and Qafzeh are evidence for a failed migrations, says that his opinion is now changed, with the new evidence. Michael Petraglia, an archeologist at the University of Oxford, is a long time supporter of the idea that there was an early expansion of anatomically modern humans in Asia. He says that: “this demonstrates it was not a failed dispersal, this is a rock-solid case for having early humans – definitely Homo sapiens – at an early date in eastern Asia.” (nature) 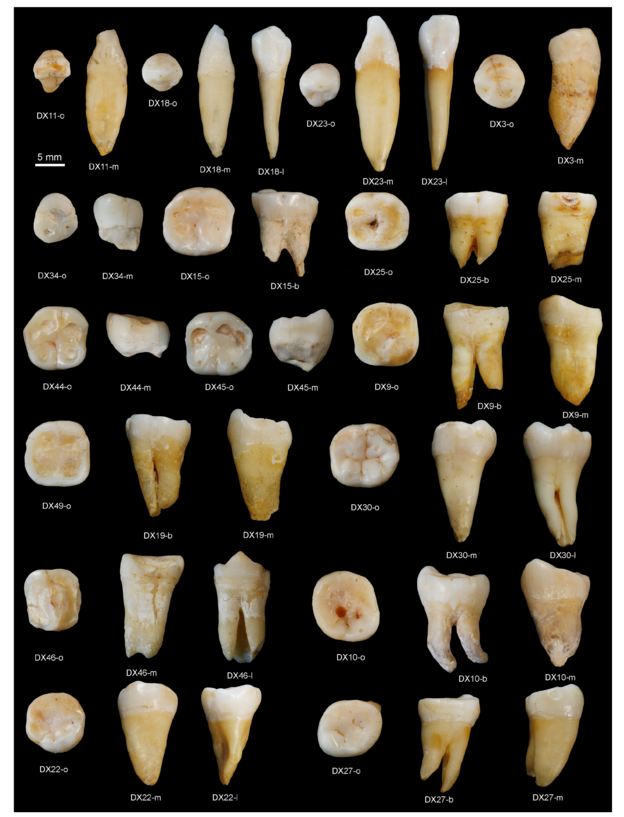 Part of the teeth found inside the cave. Photo credit: S. Xing and X-J. Wu

Scientists are still confused about the fact that Homo Sapiens reached Eat Asia before going to Europe, where he migrated about 45,000 years ago. María Martinón-Torres is a palaeoanthropologist at University College London who co-led the study with colleagues Wu Liu and Xiu-Jie Wu at the Institute of Vertebrate Paleontology and Paleoanthropology in Beijing. She thinks that the Ice Age climate and the Neanderthals that roamed there made Europe inaccessible during that time.

It is really hard for scientists to determine the true age of the teeth because traces of radioactive carbon almost disappeared after 50,000 years, but there is a big possibility that they are more than 80,000 years old. It is also important to mention that few of the teeth have features that are unusual for humans older than 50,000. This could mean that older species of modern humans had different diet in this part of Asia, or maybe they aren’t really 80,000 years old.

The mystery about the migrations and dispersion of anatomically modern humans around the world is far from being completely solved. There are still many questions to be answered. Southern China is a region where many similar caves like this one exist. Exploring them is important because they may still hide important clues for the early human population. Further research may also unearth the tools they made and also give information about their diet.