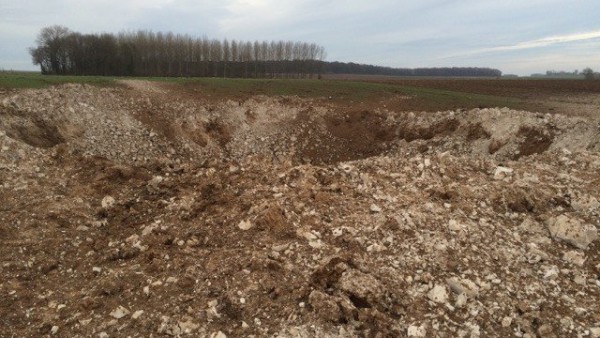 Around 10 am, Saturday morning, the inhabitants of Sailly-en-Ostrevent heard a loud explosion. It was thought for a moment that it was a gas explosion but once experts had arrived on the scene, which was in the middle of a farmers field, they could see it was an underground explosion.

The blast occurred in a field along the D43 between Sailly-en-Ostrevent and Tortequesne in western Arrageois. Local residents said that the explosion shook the walls and roofs of their homes.

Firefighters quickly attended the scene to assess potential chemical risks. Perimeter security still prevents access to the site by the public. Bomb disposal experts are also on site to determine the exact nature of the explosion and explore all parts of the field for further potential risks. 100 meters away is a German bunker and it is believed the area is full of underground tunnels.

“Several shells exploded naturally around 10 hours,” said a police spokesman of Pas-de-Calais. This is “an underground explosion that caused a large crater six meters deep and ten meters in diameter.” The discovery of shells is “fairly standard” in this area because of the heavy shelling during the war.  “what is more rare is the natural explosion of a shell,” said the spokesman. The iron harvest seeks to prevent such things happening.

The iron harvest is the annual “harvest” of unexploded ordnance, barbed wire, shrapnel, bullets and congruent trench supports collected by Belgian and French farmers after ploughing their fields. The harvest generally applies to the material from World War I, which is still found in large quantities across the former Western Front.

During World War I an estimated one tonne of explosives was fired for every square metre of territory on the Western front. As many as one in every three shells fired did not detonate. In the Ypres Salient, an estimated 300 million projectiles that the British and the Germans forces fired at each other during World War I were duds, and most of them have not been recovered. In 2013, 160 tonnes of munitions, from bullets to 15 inch naval gun shells, were unearthed from the areas around Ypres. 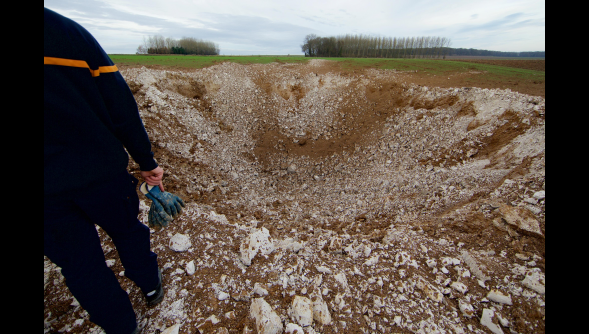 Unexploded weapons—in the form of shells, bullets, and grenades—buried themselves on impact or were otherwise quickly swallowed in the mud. As time passes, construction work, field ploughing, and natural processes bring the rusting shells to the surface. Most of the iron harvest is found during the spring planting and autumn ploughing as the region of northern France and Flanders are rich agricultural areas.Farmers collect the munitions and place them along the boundaries of fields or other collection points for authorities.

Despite the condition of the shells, they remain very dangerous. The FrenchDépartement du Déminage (Department of Mine Clearance) recovers about 900 tons of unexploded munitions every year. Since 1945, approximately 630 French clearers have died handling unexploded munitions. Two died handling munitions outside Vimy, France as recently as 1998. Over 20 members of Belgian Explosive Ordnance Disposal (DOVO) have died disposing of First World War munitions since the unit was formed in 1919. Civilian deaths are also common. In just the area around Ypres, 260 people have been killed and 535 have been injured by unexploded munitions since the end of the First World War.Shells containing poisonous gas remain viable and will corrode and release their gas content. Close to five per cent of the shells fired during the First World War contained poisonous gas and ordnance disposal experts continue to suffer burns from mustard and phosgene gas shells that were split open.

In Belgium, iron harvest discovered by farmers is carefully placed around field edges, or in gaps in telegraph poles, where it is regularly collected by the Belgian army for disposal by controlled explosion at a specialist centre in Poelkapelle. The depot was built after ocean dumping of shells stopped in 1980. Once extracted by the army, the gas chemicals are burned and destroyed at high temperatures at specialized facilities and the explosives detonated.