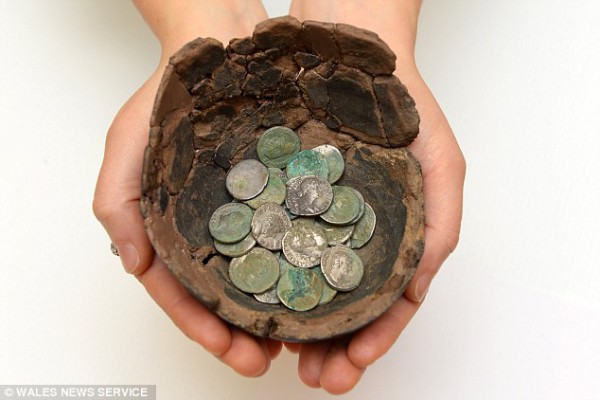 Coins dating back to more than 2,000 years have recently been discovered in a Welsh field.  After further research, it appears that the silver coins date back as far as the Roman, Mark Antony. There are about 91 coins that have been found, and although the researchers do not know the exact worth of each of them, experts believe that they could be worth tens of thousands of pounds in today’s economy.

Historians believe that the coins were issued in a span of 200 years, the earliest having been issued when Mark Antony was general in 31 BC.  Other of the coins date back as far as 54 to 68 AD when Emperor Nero was in charge, and 161 AD to 180 AD when Marcus Aurelius ruled the Empire.

The coins were found when two people stumbled upon them, unearthing them in a field near the village of Wick in South Wales.  Historians and researchers believe that one coin could have represented one day’s pay in the Roman era.

The date of 31 BC can be read on three of the coins, which would indicate that Mark Antony issued them.  Antony was one of the key allies of Emperor Julius Caesar and played a major role in the growth of the Roman Empire.  Other coins clearly show the dates of 54 and 68 AD, which fall under the reign of Emperor Nero. The rest of the coins were considered newest, dated 161 AD to 180 AD and issued under the leadership of Marcus Aurelius.  Aurelius lead many military campaigns and was also a writer; he wrote a philosophical book about conflict which is still studied today by many scholars. 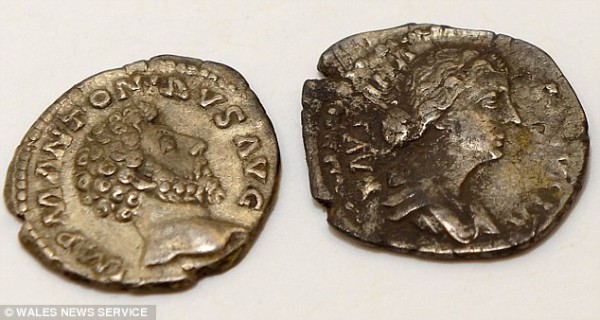 The rare hoard was discovered within a mile from another historic find of 130 denarii, which was unearthed 15 years ago. This image shows a Marcus Aurelius coin from the newly-discovered hoard

Historians are still not sure how the coins ended up in the Wales region. They believe that either a soldier was carrying them or they could have been used during trading, especially after the currency began to be accepted in Britain.  The theory of the soldiers carrying the currency could be true – in August 55 BC, Julius Caesar attempted to invade Britain with two Roman legions and eventually withdrew.  However, a year later he came back with 30,000 soldiers. The coins could have been brought over during the campaigns.  Caesar failed at conquering Britain due to the Gaul revolts.  In 43 AD, Emperor Claudius resumed the battles that Caesar started and tried invading Britain again under the command of Aulus Plautius.

After those attempts, the Romans were able to control some of the south east tribes and ended up spreading their influence throughout the country, possibly bringing more coins with them.  The spread is said to have lasted until 410 AD, which would have been under the reign of two different leaders.

Other Roman coins have been found in Britain during the Celtic times, however, they would have come in before Emperor Claudius invaded Britain.  Roman coins were actually used 250 years before Britain had their own mint.

Two researchers had actually found a small pot that contained money.  Even after all of the years it’s been buried, under the soil in the pot, the money was safe.Researchers are still not sure just how many Roman coins were minted.  There were many rulers; no one is sure who decided to start minting the coins. Although other areas were allowed to mint coins, their origin is still unknown.  Mints were generally used for the government currency and each was crafted by an artisan.

The artisan would have carved the design into a die and then the metal of the flan would be measured and heated.  The die was then hit by a hammer which would imprint the design into the coin.  If one looks closely at the coins, they could sometimes see that the designs were a little off-center instead of being perfect every time. What is interesting is that the pile of coins were only found a mile from a historical site where researchers found 13 denarii over 15 years ago.  Those coins were also close to another area where almost 200 other coins were found. The coins were then taken to the London museum where they were individually valued to see how much they are worth now and were worth then.

« Before alarm clocks were affordable, there was a profession called a “Knocker-Up“
A Road And A Bridge With History. The Oldest Road Bridge In The USA Is In Philly And Is Still Being Used »