Are there remains of the Egyptian army from the biblical exodus at the bottom of the Red Sea?

This is a story that has been circulating in public for a long time. For years, people have claimed that there is physical evidence for the biblical exodus still to be found in the depths of the Red Sea. Some people are even bold to say that they even found the evidence. The truth is, this has never been 100% confirmed. Most recently, 2 months ago, another group of biblical researchers claimed that they found human remains and ancient Egyptian weapons corresponding with the event mentioned in the bible. 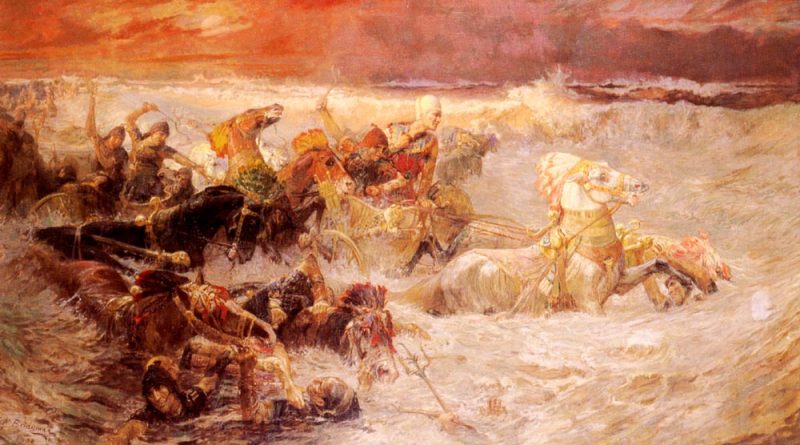 A team of underwater archeologists that was searching for ancient ships and artifacts from the Bronze age told Egypt’s Antiquities Ministry officials that they found a large amount of really old human bones and artifacts. They found the items in the Gulf of Suez, 1.5 kilometers offshore from the modern city of Ras Gharib. Furthermore, the researchers claim that these are the remains of a large Egyptian army, probably dating from the 14th century BC.

According to some sources, the team of archeologists have managed to find more than 400 separate skeletons so far, together with hundreds of pieces of metal and armor. It is said that there are also remains of two war chariots beneath the sea. The team thinks there could be 5,000 more skeletons to be found. They suggest that this place was once a dry land where a vast army has died.

The khopesh blade pictured below is thought to belong to a wealthy and important figure. The team of archeologists claims that it was found near one of the submerged chariots.

After reviewing the recent evidence, many biblical scholars believe that this underwater site could be connected to the Exodus. The bodies are stuck in clay and rock. This indicates that they maybe died in a mudslide or a huge tidal wave. The researchers also think that this area was dry land in the time when their deaths occurred. The fact that there was no ancient boat remains found in the area supports this idea.

The vast amount of skeletons could mean that a huge ancient army tried to pass here, but it was annihilated by an unknown force. Most of the scholars who believe in the biblical stories consider this as a firm proof for the Red Sea Crossing event. According to the Exodus account, Moses held out his staff and the Red Sea was parted by God. The Israelites walked on dry ground and crossed the sea, followed by the Egyptian army. Moses again moved his staff once the Israelites had crossed and the sea closed again, drowning the whole Egyptian army.

Whatever the truth may be, the “Red Sea Crossing” is considered to be of more symbolic importance than a real historical event. Mainstream archaeology thinks that there are not enough  solid facts which can prove this event really happened. This most recent discovery looks very promising to those who support the idea of the Red Sea crossing, but still there is much more research that needs to be done, before scientists can really prove anything. This is just a small scratch on the surface of the whole story about this ancient event, or legend.