The night was very cold and the storm caused the Neva to toss about more than usual. The sailors – most of which were old hands and used to sailing in these Arctic waters, were not particularly worried – they had experienced worse. This time however, the storm increased in intensity and there was an ominous sound of cracking, heralding the loss of one of the masts and resultant damage to rigging. The situation was becoming exceedingly dangerous.

It was decided, since the ship was fairly close to its destination of Sitka, that it would be best to attempt to reach there. Unfortunately the Neva did not manage to complete the journey. In January of 1813, the ship struck a rock near to Kruzof Island and sank. How the survivors managed to abandon the sinking ship and struggle their way to land is difficult to understand, but they did.

The Neva was a 370-ton Russian ship with an interesting history. She was built in Britain, a full-rigged merchant ship originally named the Thames, and she was launched in 1801. She was bought by the Russians in 1802 when her name was changed to Neva. The Neva, by the time of her final voyage, had participated in trips to the Far East and was the first Russian ship to circumnavigate the world. She was involved in the Battle for Sitka in 1804, when the Russians re-captured the Fort of St. Archangel Michael (which became Sitka) on the Alaskan coastline. From 1805-1807, she was engaged in trading a wide range of cargoes, having sailed as far as China and various Pacific Ocean stations. She was also known to have reached the Australian mainland, visiting Port Jackson (Sidney), the first Russian ship to do so.

Thus, by the time she left the Russian port of Okhotsk in August of 1812, she was a well-travelled, tried and trustworthy ship.  She was loaded with a cargo of furs and guns and had 75 people on board. The voyage was very unpleasant, as they had to endure three months of heavy storms. During the voyage, seventeen people on board died from various sicknesses, and severe shortages of water were experienced. Finally the ship reached Prince William Sound, where sailing conditions became a little easier, though not for long. When they were fairly close to their destination, tragedy struck and the Neva met her fate somewhere off the southern edge of Kruzof Island.

Imagine the panic among the sailors – the weather was freezing, the storm was raging, the waters were heaving, and the ship was sinking. Since there are no official records of this disaster, most of what we know of this terrible occasion comes from the oral records of a few survivors, and from the Tlingit tribe who lived in the area.  Of the remaining persons on board, only twenty-eight managed to get to shore, and twenty-six of them survived until they were rescued nearly a month later. How devastating it must have been to reach land soaking wet, freezing cold, with nothing but what one had been able to retain on their persons, and probably in a state of shock – what a dire situation to face.

Dave McMahan is an archaeologist and member of the Sitka Historical Society who has been involved in the excavation of various historical Russian sites around the area for many years. He is fairly sure that he has identified the camp-site of the Neva survivors. McMahan’s interest lies in finding clues to explain how these mariners managed to survive the dreadful Arctic winter conditions for the month before they were rescued. The men had few clothes, no food, no implements, and no shelter, and yet they managed to survive. 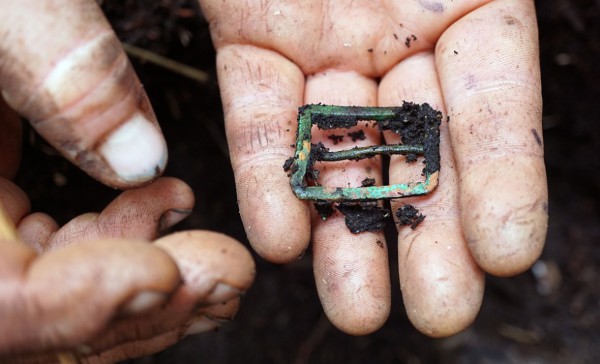 The Tlingit people identified the site based on their oral traditions. When it was excavated, clues were found as to how people in desperate situations become inventive. The archaeologists found a number of hearths surrounded by bits of copper, musket balls which had been shaped to fit smaller weapons, a Russian axe, and a fish hook fashioned from copper scraps. There were bits of steel scrapings and gun flints, which lead to the supposition that they were used in lighting fires. One report has it that a survivor had brought a certain firearm ashore with him and it is thought the survivors had been making the musket balls smaller to fit this weapon. It would seem that these survivors used every possible bit of buckle, belt, or flotsam from the shipwreck in order to help them survive. “Collectively, the artefacts reflect improvisation in a survival situation,” said Mc Mahan. 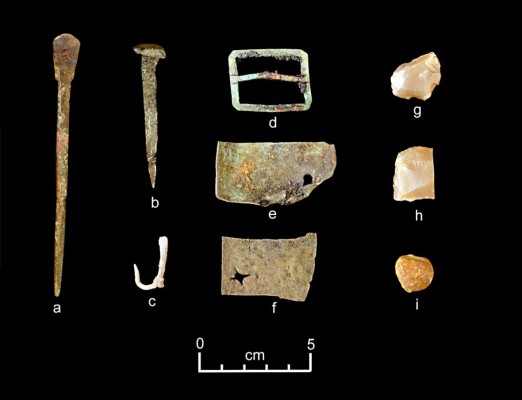 A representative collection of artefacts discovered in July 2015 includes (from left) part of a set of dividers, a nail, a fishhook, a buckle, sheet copper, gun flints and a musket ball.Dave McMahan, Sitka Historical Society

It is hard to imagine what these people had to endure in order to survive. Where did they find fuel for a fire, unless their ship’s wrecked wood washed ashore? How did they find or create some type of shelter? Where did they locate food? One imagines them huddled together trying to keep warm, perhaps in makeshift shelters fashioned from snow. They would need the fires to shape the bits of metal into usable items such as the fish hooks or perhaps even knives. Did they manage to catch fish or to club seals for food and for fur to keep them warm? Did they scavenge for other foods and if so, what and where? It must have been a very hard and frightening experience, yet they survived.

There seems to be no available official records of the disaster or of the rescue of the survivors. Information is sparse, and mainly in the form of traditional oral tales of the Tlingit peoples. Very few survivors of the Neva shipwreck or their descendants seem to have recorded much about this occasion, which is a pity, for what a tale of triumph-over-disaster they could have told. Maybe somewhere, someday such a record will be brought to light – one can only hope!