Years of research suggests Australia has its own Stonehenge 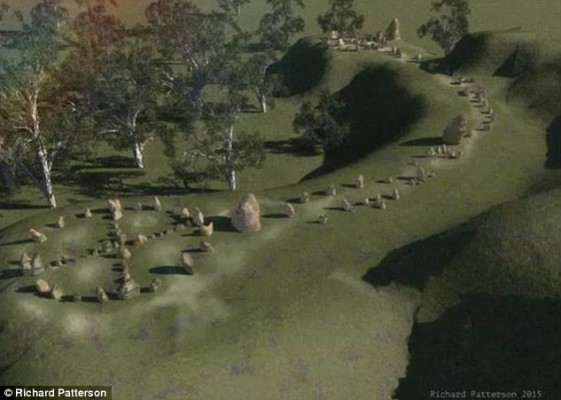 Since the 1940s, several researchers have investigated the possibility that Australia may have its very own Stonehenge.

A New South Wales teacher, Richard Patterson, came across the findings of Frederic Slater, a researcher and journalist, speculating about certain letters discovered on a rock formation.  Slater had been the president of the Australian Archaeological Society during the 1930s.  In his letters and documents, he wrote the details of “Australia’s Stonehenge”.  Patterson began researching the formation while working at the Brunswick Valley Historical Society.

Steven and Evan Strong have also been working with Slater’s letters, and though they have still not found exactly where this Stonehenge could be, they have proposed an area about 40 km from Mullumbimby to be the most likely location of the possible monolith.  The Strongs now have all 16 letters that were written by Slater. The father and son have been working on this information for years; their research leads them to believe the language on the stones originated in Australia. Their investigation is ongoing, and they continue to update the public on new information they find, but they plan on never revealing the area of Stonehenge for fear that people would vandalize the sacred site.

The documents Slater wrote to his colleague suggest that this Stonehenge would have once been known throughout the whole country.  He also believed the mound was once the oldest temple in the world.  The Stonehenge consisted of 185 stones and had carved symbols of which is believed to be some kind of language native to Australia.  As Slater studied this “Stonehenge” site, he also studied the language and symbols of Australia, and was working on a dictionary of his findings.  He had found 28,000 words in the letters.  The old language consisted of numbers, hand signs, stone arrangements, elements, trees, letter sounds, animal shapes and more; they had many ways of communication.

The Strongs have in turn studied Slater’s interpretations and they reveal the explanations on their website.  Many of Slater’s ideas and secrets went to the grave with him due to the fact that his ideas and research were not supported in the 1930s and 1940s. Steven Strong said that many of the things said about the site did not match up.

Steven Strong told one of Australia’s newspapers that the whole are is considered blessed ground.  He also said that dozens of people have walked and traveled miles just to perform certain ceremonies at the site.

In the last few years, some stones have fallen loose.  However, the Strongs have drawn up new maps with the fallen rocks in the exact areas where they were originally placed.  Between Patterson’s and the Strongs’ maps, the public has been kept updated on new findings.

Graphics have been provided that indicate what the Australian Stonehenge may have looked like. The computer-generated photos, made from a collection of the research done by the Strongs, Patterson, and Slater, show a circle of rocks with a criss-cross in the middle.  There is a formation of rocks that line a walking path up a hill.  Without giving the area away, the Strongs photographed some of these rocks up close.

Unfortunately, the original rock formations were torn down in 1940 after a farmer decided that they were a hindrance and he no longer wanted them on his land – he had his 15-year-old son tear down what could have been a sacred site.

« Surviving winter in the Middle Ages – Man spends 8 months living all alone in 10th Century conditions
Meet Old Tjikko- The Norway Spruce that has been around for 9,550 years »