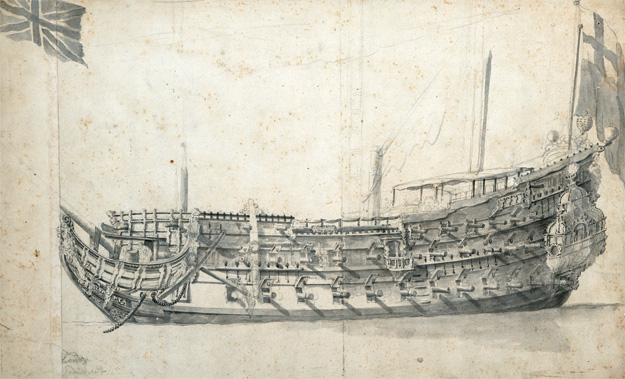 While a group of divers was doing a routine geophysical survey in the Thames River, the team unexpectedly came upon a sunken English Navy warship.  Many have thought that this particular warship was lost for good, but with the accidental find, divers have been working nonstop to preserve anything and everything they discover.  The warship is old; it has been in the Thames for decades.  Because of the deterioration of the wreck, the crew is trying to salvage as many artifacts as possible before the items disappear.

The ship was built to undergo stress and had been successful in battle; no one on the ship expected its fate.  The London set sail in 1665 when the Second Anglo-Dutch War was just beginning.  The captain of the Second Rate 76-gun warship was under orders to sail from the Chatham Dockyard and up the Thames toward Gravesend.  The weapon-stocked ship and its crew had nothing to worry about; they would be coming back alive and victorious in battle.  The ship had nearly 300 people on board, including a large number of women.  It was carrying wives and girlfriends who were looking to bid their last goodbyes to the men fighting in the war.

It’s not clear exactly how it happened, but the warship’s gunpowder was ignited accidentally.  This caused the ship to rip apart, taking the 300 people on board down with it.  One man, Samuel Pepys, documented the accident and said that at least 24 men and one woman were able to survive the wreck.    Another man, John Evelyn, said that the disaster had created nearly 50 widows, and that 45 of the 50 women with child. 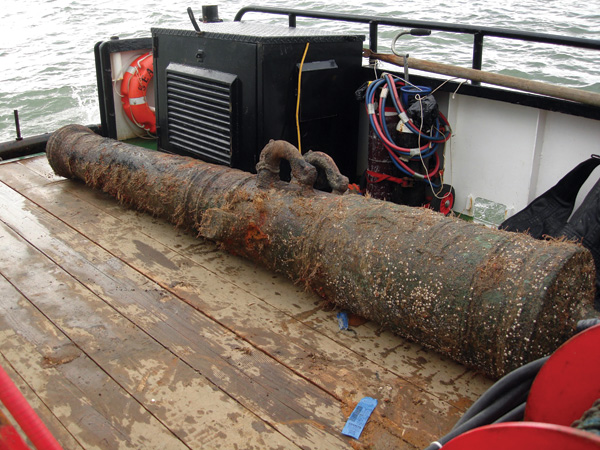 Although the archaeologists and licensee team have yet to locate any of the London’s bronze ordnance on the seabed, five cannon were raised from the wreck in 2007. Two of these are now at the Royal Armoury. source

The ship ended up lying in the water for nearly 345 years, until 2005 when the diving group happened upon the sunken wreck.  The team’s sonar scan was used in the London Gateway project.  The project was proposed when there needed to be new construction of a deep-water port at Thurrock, which required the Thames channel to be deepened as well.

Before beginning the project, the divers had to make sure that there weren’t any archaeological remains in danger of being destroyed in the deepening of the channel.  The divers did expect some archaeological sites to be found due to the channel’s being one of the major routes connecting London.  Divers found a ship from the Second World War, a Stuka, and the SS Dovenby.  These findings helped lead the divers to the warship; soon after, the preservation of the artifacts began.

Divers were not sure how many artifacts would survive due to the brisk current of the Thames.  One of the divers, Alison James, said that due to the age of the ship, many artifacts such as shoes would disappear fairly easily with the current, causing them to be lost forever.  As well, marine life was found hidden in the wood, breaking down the remains of the wooden ship over time.

In 2008, the London warship was put on the list of protected wrecks.  After being put on the Heritage at Risk Register, divers were able to find out just how at risk the ship was.  By 2013, divers started a major excavation project to save as much of the ship as possible. 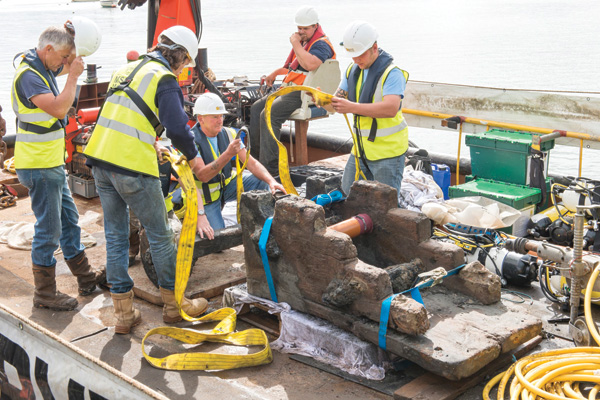 The most substantial artefact to be raised from the London wreck is this gun carriage. It was detected in 2014, but, as the silts around it eroded, the carriage attracted the attention of wood-boring creatures. After having been carefully excavated, the carriage was lifted using a 19-ton crane in August. source

The diving crew knew that there were 76 bronze weapons on the ship when it set sail, however, they didn’t find even one weapon during their dives.  After working with the Maritime and Coastguard Agency, Historic England, and Kent & Essex Police, the team found out that there were divers who had previously been investigated for having stolen the guns from the site.  Five guns had been recovered from the ship in 2007.  Three of them were sold to a private American collector before it was known that the guns would become protected items.  The other two were sold in London and are now part of the Royal Armoury.  When the guns were sold, the ship was not protected, however, the diver who sold them has been sentenced for theft.

After months of excavation, the first artifact brought up from the Thames was a cannon carriage.  Feeling around the murky Thames waters, the divers saw that it was apparent that the carriage was terribly eroded.  If they left it down there any longer, it would be completely gone.  The team used an air lift to dig it out.  With the water inside it, the cannon weighed a ton.

The cannon is the only piece known to have survived from the era.  Constructed at Chatham, the ship’s guns were all unique, meaning that the carriage was custom built.  Other pieces found around the carriage were 140 gun tackles, which included pulley blocks, ropes, hand spikes, and other pieces to hold the cannons in place.

For archaeologists, the shipwreck site is an amazing find, yet it reminds them that the area is also where hundreds of people lost their lives.  James said that they did find a lot of remains throughout the excavation process.  Sadly, a majority of those remains were female.  With the remains there was also found a little sundial and a compass, along with dozens of single shoes.  One diver said that a lot of the trinkets were stowed carefully in the ship until being found with the shipwreck in 2013.  There were some coins that were concreted together, a signet ring, and a pipe found as well.

James said that the artifacts and larger pieces left in the water have been surveyed and taped off so that other divers working on it can tell which areas have been explored.  The surveyed parts will also indicate to other divers they shouldn’t be disturbing this area.

The next area they will be working on will be the silt-covered portions.  They believe there is much more buried beneath the silt, so they hope to find even more information and artifacts in the future.  The London is one of only three Second Rate warships built between 1642 and 1660.  It’s the only surviving ship as well, making the excavation even more significant.