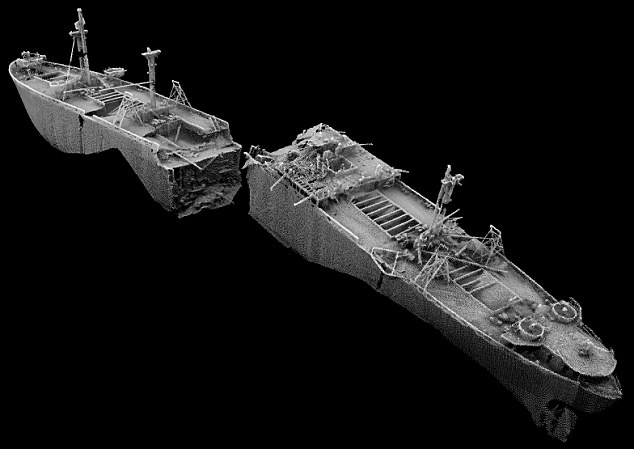 Last month we published an article on the SS Montgomery. Now, using the latest in multibeam sonar technology, this image of the American war ship has been released by the Maritime and Coastguard Agency (MCA), which shows the huge vessel in two parts. The amazing 3D image of the vessel is the most high-resolution one ever released of the ship, which shows the true extent of the damage. In the image, you can see the huge cargo including the ships anti-aircraft gun positions and broken beams.

The incredible photo even gives a glimpse of the inside of the war ship – where it was likely the bombs would have been kept. Here is the full article from last month:

The ship was built by the St. Johns River Shipbuilding Company in its second year of operations, and was the seventh of the 82 such ships built by that yard. Laid down on 15 March 1943, she was launched on 15 June 1943, and completed on 29 July 1943, given the official ship number 243756, and named after General Richard Montgomery, an Irish soldier who was killed during the American War of Independence.

In August 1944, on what was to be her final voyage, the ship left Hog Island, Philadelphia, where she had been loaded with 6,127 tons of munitions.

She travelled from the Delaware River to the Thames Estuary, then anchored while awaiting the formation of a convoy to travel to Cherbourg, France, which had come under Allied control on 27 July 1944 during the Battle of Normandy.

When Richard Montgomery arrived off Southend, she came under the authority of the Thames naval control at HMS Leigh located at the end of Southend Pier. The harbour master, responsible for all shipping movements in the estuary, ordered the ship to a berth off the north edge of Sheerness middle sands, an area designated as the Great Nore Anchorage. 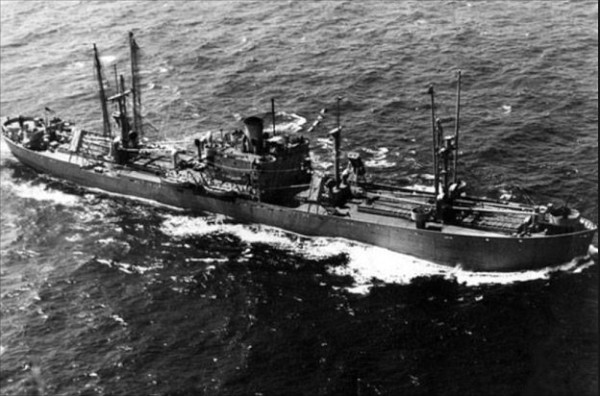 The salvage effort was abandoned after the SS Montgomery flooded and sank below the waves. Today it remains on the sandbank where it sank, close to the Medway Approach Channel. source

A Rochester-based stevedore company was given the job of removing the cargo, which began on 23 August 1944, using the ship’s own cargo handling equipment. By the next day, the ship’s hull had cracked open, causing several cargo holds at the bow end to flood. The salvage operation continued until 25 September, when the ship was finally abandoned before all the cargo had been recovered. Subsequently, the ship broke into two separate parts, roughly at the midsection.

During the enquiry following the shipwreck it was revealed that several ships moored nearby had noticed Richard Montgomerydrifting towards the sandbank. They had attempted to signal an alert by sounding their sirens without avail, since throughout this Captain Wilkie of Richard Montgomery was asleep. The ship’s chief officer was unable to explain why he had not alerted the captain. A Board of Inquiry concluded that the anchorage the harbour master assigned had placed the ship in jeopardy, and returned Richard Montgomery’s captain to full duty within a week.

According to a 2008 survey, the wreck is at a depth of 15 m (49 ft), on average, and leaning to starboard. At all states of the tide, her three masts are visible above the water. 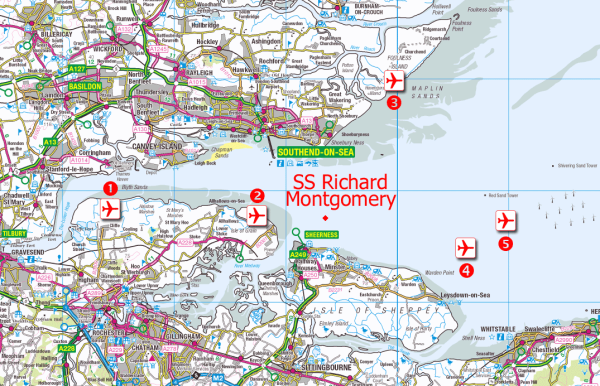 Map of the Thames Estuary with the exclusion zone around the wreck of Richard Montgomery, and locations of proposed airports: 1. Cliffe; 2. Grain (Thames Hub); 3. Foulness; 4. Off the Isle of Sheppey; 5. Shivering Sands (“Boris Island”). source

Because of the presence of the large quantity of unexploded ordnance, the ship is monitored by the Maritime and Coastguard Agency and is clearly marked on the relevant Admiralty Charts. In 1973 she became the first wreck designated as dangerous under section 2 of the Protection of Wrecks Act 1973. There is an exclusion zone around her monitored visually and by radar. The exclusion zone around the wreck is defined by the following co-ordinates:

According to a survey conducted in 2000 by the United Kingdom Maritime and Coastguard Agency,  the wreck still held munitions containing approximately 1,400 tonnes (1,500 short tons) of TNT high explosive. These comprise the following items of ordnance: 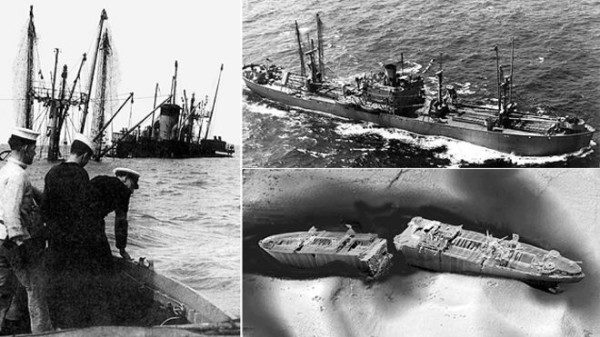 An investigation by New Scientist magazine concluded in 2004, based partly on government documents released in 2004, that the cargo was still deadly, and could be detonated by a collision, an attack, or even shifting of the cargo in the tide. The bad condition of the bombs is such that they could explode spontaneously. Documents declassified shortly before revealed that the wreck was not dealt with immediately after it happened, or in the intervening 60 years, due to the expense.

The Maritime and Coastguard Agency nevertheless believe that the risk of a major explosion is remote.The UK government’s Receiver of Wreck commissioned a risk assessment in 1999, but this risk assessment has not been published. The Maritime and Coastguard Agency convened with local and port authorities to discuss the report in 2001 and concluded that “doing nothing was not an option for much longer.” 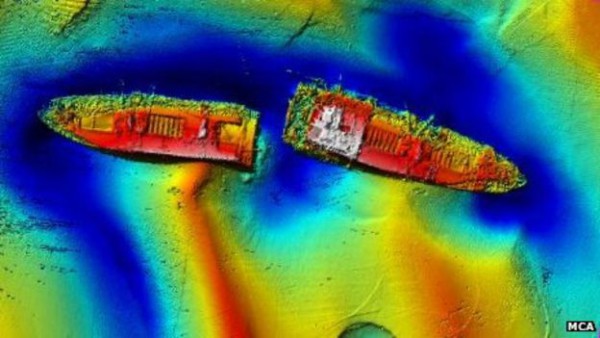 Sonar images show the wreck in two pieces on a sandbank about 1.2 miles (2km) off the coast of Sheerness. source

One of the reasons that the explosives have not been removed was the unfortunate outcome of a similar operation in July 1967 to neutralize the contents of Kielce, a ship of Polish origin, sunk in 1946 off Folkestone in the English Channel. During preliminary work Kielce, containing a comparable amount of ordnance, exploded with force equivalent to an earthquakemeasuring 4.5 on the Richter scale, digging a 20-foot-deep (6 m) crater in the seabed and bringing “panic and chaos” to Folkestone, although no injuries.

According to a BBC news report in 1970, it was determined that if the wreck of Richard Montgomery exploded, it would throw a 1,000-foot-wide (300 m) column of water and debris nearly 10,000 feet (3,000 m) into the air and generate a wave 16 feet (5 m) high. Almost every window in Sheerness (pop. circa 20,000) would be broken and buildings would be damaged by the blast. However, news reports in May 2012 (including one by BBC Kent) stated that the wave could be about 4 feet (1 m) high, which although lower than previous estimates would be enough to cause flooding in some coastal settlements. 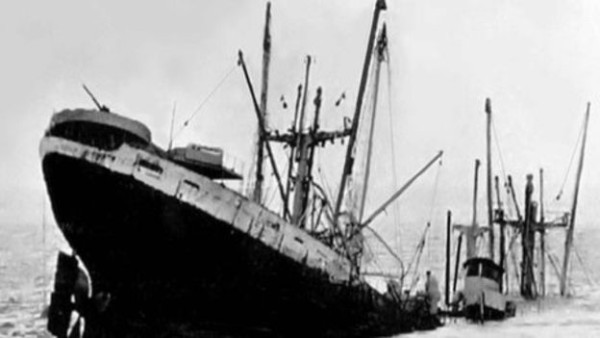 The SS Richard Montgomery was anchored in Sheerness when it grounded and broke up in 1944. source

When the condition of the munitions was originally assessed there was concern that copper azide, an extremely sensitive explosive, would be produced through reaction between lead azide and copper from fuse components (lead azide would react with water vapour, rather than liquid water, to form hydrazoic acid, which could react with copper in the detonating cap to form copper azide).

The Maritime and Coastguard Agency (MCA) said in 1998, “as the fuses will probably all have been flooded for many years and the sensitive compounds referred to are all soluble in water this is no longer considered to be a significant hazard”.

Critics of government assurances that the likelihood of a major explosion is remote argue that one of the fuses of the 2,600 fuzed-fragmentation devices could become partially flooded and undergo the reaction producing copper azide. A knock, such as caused by the ship breaking up further, or a collision on the busy shipping lane, could cause the copper azide to explode and trigger an explosive chain reaction detonating the bulk of the munitions.

The wreck site has been surveyed regularly since 1965 to determine the stability of the structure, with a diver survey being completed in 2003. High-resolution multi-beam sonar surveys in 2005 and September 2006 found that there had been no recent significant movement of the wreck.

Surveys undertaken in 2008 and 2009 by the MCA, and reported in September 2011, showed that the ship was continuing to deteriorate structurally, with accelerated deterioration in some areas and new cracks appearing in the bow section of the wreck. The report states that “Whilst significant structural collapse does not appear to be imminent, surveys suggest that this prospect is getting closer.” The increasing calls for a new airport in the Thames estuary would mean a solution would have to be found for removing the wreck, or at least making it safe, should the airport be built.

A May 2012 report into the condition of the wreck issued by the Department for Transport found that, while there had been little change in 2009-2010, the future was uncertain due to the “dynamic nature” of the surrounding environment. Mayor of London Boris Johnson said that engineers had found the wreck would not prevent construction of an airport, and the wreck area would have to be considered. The co-chair of the Lib Dem committee on transport, Julian Huppert disagreed saying “This report shows the ship’s slow deterioration is continuing with the lethal cargo still on board,” and “This must surely put an end to the bonkers idea of building an airport in the Thames estuary”.  A 2013 Daily Telegraph article quoting local historian Colin Harvey, agreed the ship would have to be removed before any airport was built and printed a sonagraph showed the ship clearly broken into two pieces. However a DfT spokesperson said that the ship remained stable, and the likelihood of an explosion was remote; the matter of the ship was unrelated to the ongoing development of the aviation strategy.