Amazing sketches from WWI, drawn by the illustrator of Winnie the Pooh 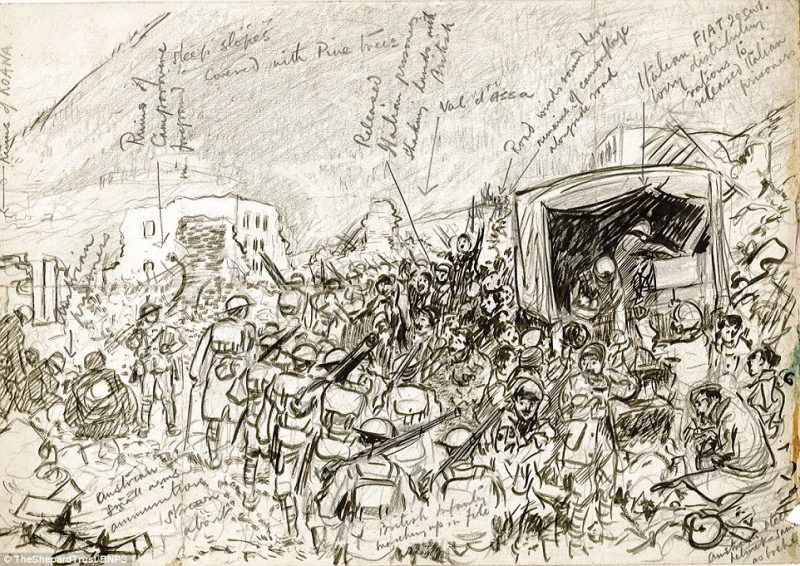 More than 100 sketches made by E.H. Shepard, the man that illustrated Winnie the Pooh, have been discovered locked in a trunk. The trunk that belonged to Shepard was unlocked for almost 100 years. Shepard is most famous for his classic illustrations like Winnie the Pooh and The Wind in the Willows, but not many people know that he was also part of some of the bloodiest battles during the First World War. He was a captain in the Royal Garrison Artillery and when he wasn’t fighting the enemy, he made some amazing illustrations from the trenches and battlefields and some caricatures of his comrades. These sketches, that were considered lost,  are now giving us a personal insight into the war, from the perspective of a soldier.

Many of the illustrations are humorous, showing the irony of war, laughing both at the enemy and the friends, but some of them are dreadful and serious, as the war truly was. There is one called, “Complete Desolation” that shows a the bare landscape of the Somme. Another illustration was made soon after the death of his brother Cyril, he was killed, also on the Somme, near the post were Shepard served. This one shoved the grave of his brother. 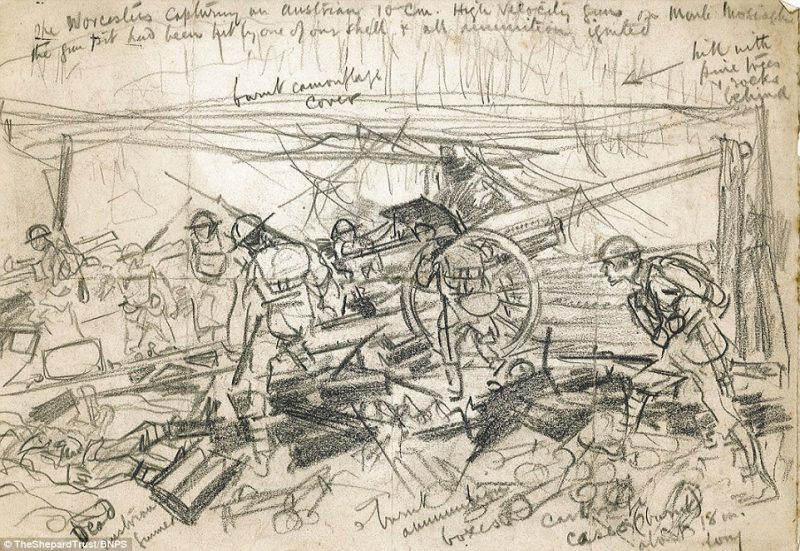 Many of the images are hastily-drawn, such as this battlefield sketch showing British soldiers overwhelming an Austrian gun emplacement at Monte Mosiagh

The Shepard Trust, the institution that is taking care of Shepard’s works thought that these drawings were lost after searching his archives. Fortunately, they were found  in the trunk that contained his war memorabilia. Besides the sketches, the box (unopened since 1919, when he returned in England) contained his personal belongings such as artist’s tools and his military uniform

The whole collection is published in a book called “Shepard’s War”. The illustrations are compiled by James Campbell, he runs the Shepard Trust, and his mother in law (Minette Hunt) is actually Shepard’s granddaughter.

“It was well-known that Shepard served in the First World War and they wanted to use sketches from that time. To our astonishment, we found that we didn’t seem to have anything from his time in the trenches whatsoever, which was very odd. He was a prolific artist and was constantly drawing so it was very peculiar that there was a gap during the war. Then we found in our own private archive a large box which appeared not to have been opened in almost 100 years. No-one was safe from his mockery, but the humour wasn’t malicious. What’s amazing is that he was fighting a war as a soldier, but also working commercially for Punch magazine and other publications. Most people nowadays remember Shepard as the artist who drew Winnie the Pooh and Wind in the Willows, but it is wonderful that we can finally show how he illustrated a completely different scenario.” 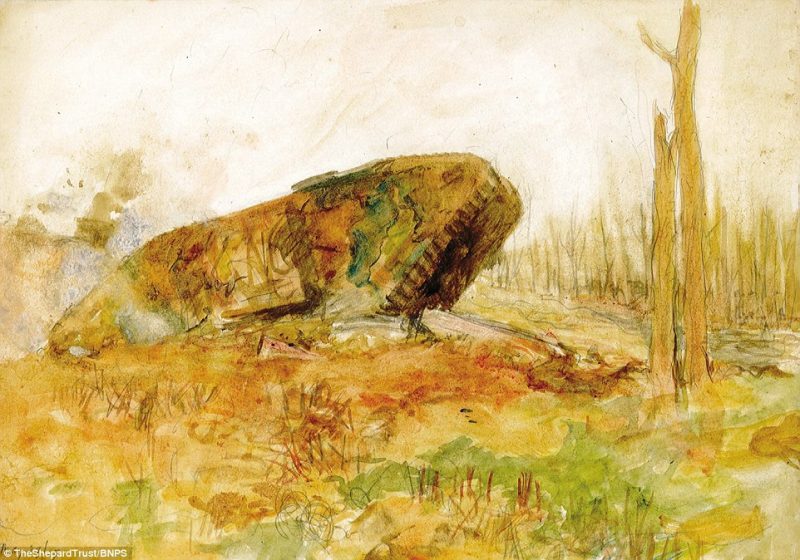 A sketch of a tank rolling across No Man’s Land in Arras, northern France, in 1917 drawn by Winnie the Pooh illutstrator E.H. Shepard

Shepard made the illustrations for the first Winnie the Pooh book in 1926, eight years after the war.He was recommended to the author, A.A. Milne, by a colleague for Punch magazine. He then went to illustrate all four parts of Winnie the Pooh stories. He also illustrated Kenneth Grahame’s The Wind in the Willows and went into history as one of the best illustrators. Shepard was made a knight commander of the Order of the British Empire in 1972, in recognition of his amazing work. He died March 24, 1976, aged 96. 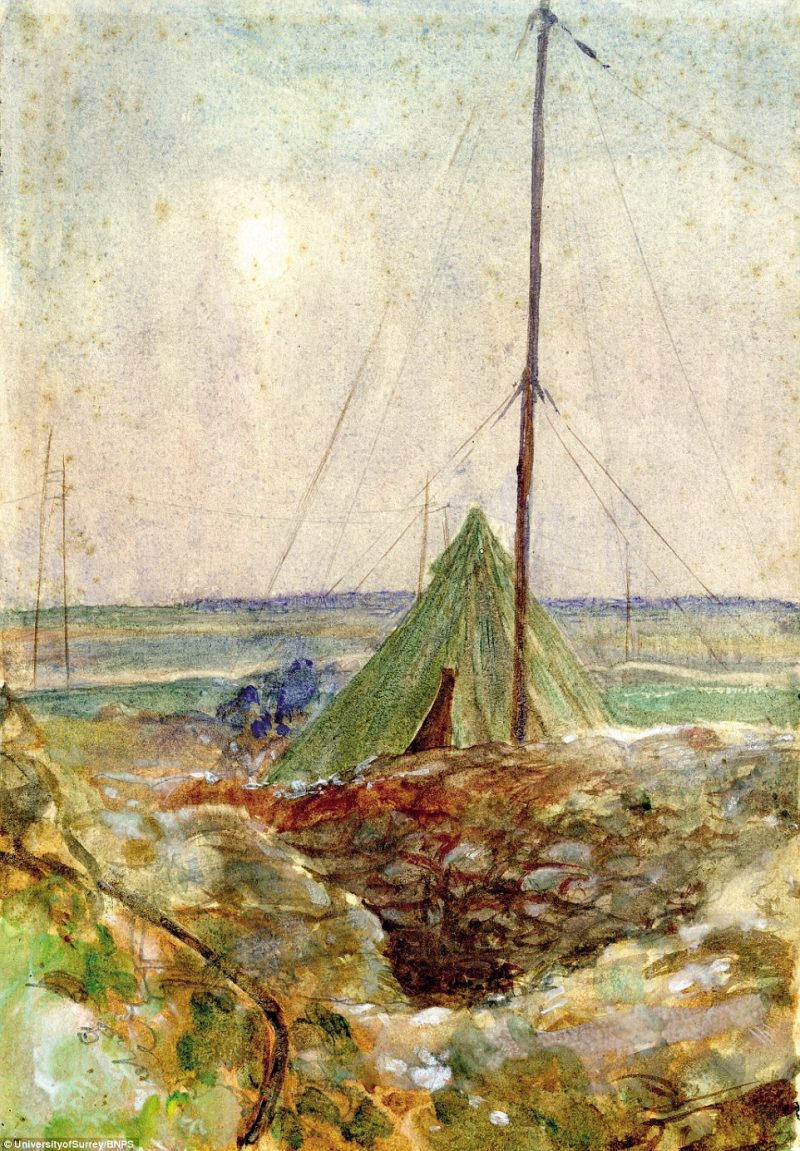 This watercolour shows Shepard’s dugout in the Somme, next to a tent and an ominous stretch of no-man’s land