Science and medicine have come a long way and there has been a world of change that we have seen through time. Photography has been a silent partner to this change. It has helped to catalogue, understand and discover. But do you know who pioneered its usage in research? It was French neurologist, Guillaume-Benjamin- Amand Duchenne… or as he was known amongst his peers, Duchenne de Boulogne.

Guillaume-Benjamin-Amand Duchenne (de Boulogne) was a French neurologist who revived Galvani’s research and greatly advanced the science of electrophysiology. In a nutshell, Luigi Galvani was an Italian physician, physicist, biologist, and philosopher, who discovered animal electricity and he discovered that the muscles of dead frogs’ legs twitched when struck by an electrical spark. This discovery was one of the first forays into the study of bioelectricity, a field that still studies the electrical patterns and signals of the nervous system.

The era of modern neurology developed from Duchenne’s understanding of the conductivity of neural pathways, his revelations of the effect of lesions on these structures and his diagnostic innovations including deep tissue biopsy, nerve conduction tests (NCS), and clinical photography. In 1835, Duchenne began experimenting with therapeutic “électropuncture” (a technique recently invented by Magendie and Jean-Baptiste Sarlandière by which electric shock was administered beneath the skin with sharp electrodes to stimulate the muscles). Later, in 1842, in order to continue his medical research, he developed a non-invasive technique of muscle stimulation that used faradic shock on the surface of the skin, which he called “électrisation localisée“. 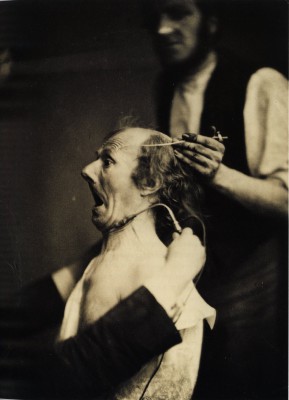 Duchenne effectively used the newly invented medium of photography to capture electrically induced expressions of his subjects. Influenced by the fashionable beliefs of physiognomy of the 19th century, Duchenne wanted to determine how the muscles in the human face produce facial expressions. He is known, in particular, for the way he triggered muscular contractions with electrical probes, recording the resulting distorted and often grotesque expressions with the recently invented camera. He published his findings in 1862, together with extraordinary photographs of the induced expressions, in the book Mecanisme de la physionomie Humaine (The Mechanism of Human Facial Expression, also known as The Mechanism of Human Physiognomy).

Duchenne believed that the human face was a kind of map, the features of which could be codified into universal taxonomies of inner states. He was also convinced that the expressions of the human face are directly linked to the soul of man. Duchenne was skeptical of the face’s ability to express moral character; rather he was convinced that it was through a reading of the expressions alone (known as pathognomy) which could reveal an “accurate rendering of the soul’s emotions”. He believed that he could observe and capture an “idealized naturalism” in a similar (and even improved) way to that observed in Greek art. 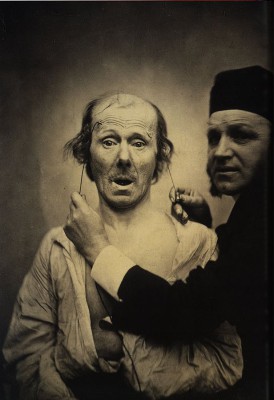 Demonstration of the mechanics of facial expression. Duchenne and an assistant faradize the mimetic muscles of “The Old Man.”

Duchenne used six living models in the scientific section, all but one of whom were his patients. His primary model, however, was an “old toothless man, with a thin face.“ To stimulate the facial muscles and capture these “idealized” expressions of his patients, Duchenne applied faradic shock through electrified metal probes pressed upon the surface of the various muscles of the face.

Through his experiments, Duchenne sought to capture the very “conditions that aesthetically constitute beauty“ and he referred to these facial expressions as the “gymnastics of the soul”. He replied to criticisms of his use of the old man by arguing that “every face could become spiritually beautiful through the accurate rendering of his or her emotions”, and furthermore said that because the patient was suffering from an anesthetic condition of the face, he could experiment upon the muscles of his face without causing him pain. 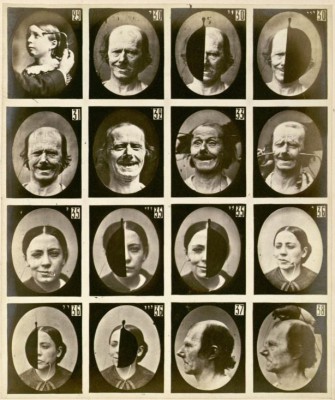 G.-B. Duchenne de Boulogne, Synoptic plate 4 from Le Mécanisme de la Physionomie Humaine. 1862, albumen print. In the upper row and the lower two rows, patients with different expressions on either side of their faces

From an art-historical point of view, the Mechanism of Human Physiognomy was the first publication on the expression of human emotions to be illustrated with actual photographs. Photography had only recently been invented, and there was a widespread belief that this was a medium that could capture the “truth” of any situation in a way that other mediums were unable to do. Duchenne’s contribution to the field is unparalleled, not just in terms of medical photography, but in also educating people from other sciences, as to how useful photography can be, from a research point of view. Most importantly, his work created a meeting point of science and art.