The Decadent 13th Century Caerlaverock Castle is the epitome of the medieval stronghold.

Caerlaverock Castle is a moated triangular castle first built in the 13th century. It is located on the southern coast of Scotland, 11 kilometres (6.8 mi) south of Dumfries, on the edge of the Caerlaverock National Nature Reserve. Caerlaverock was a stronghold of the Maxwell family from the 13th century until the 17th century when the castle was abandoned. It was besieged by the English during the Wars of Scottish Independence and underwent several partial demolitions and reconstructions over the 14th and 15th centuries.

The present castle was preceded by several fortifications in the area: a Roman fort on Ward Law Hill and a British hill fort that was in use around 950.

The earliest mention of the lands of Caerlaverock is around 1160 when they were granted to the monks of Holm Cultram Abbey.Around 1220 Alexander II of Scotland granted the lands to Sir John Maxwell, making him Warden of the West March. Sir John Maxwell also served as Chamberlain of Scotland from 1231–1233 and began work on the first castle at Caerlaverock. This castle was square in shape and was one of the earliest stone castles to be built in Scotland. It had a moat with a bridge facing north. Only the foundations and remains of a wooden enclosure around it remain. 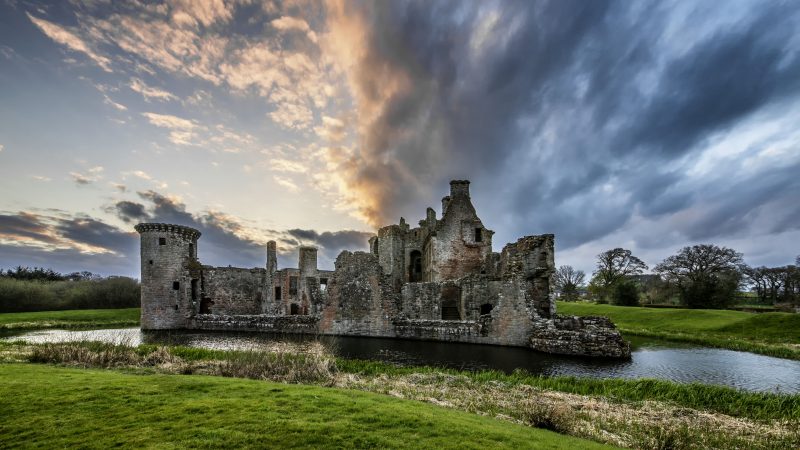 This early castle may have been incomplete when it was abandoned in favour of a rock outcrop some 200 metres (660 ft) to the north. It was here that Sir John’s brother Sir Aymer Maxwell began construction of the present castle. Sir Aymer also served as Chamberlain in 1258–1260 and was Justiciar of Galloway in 1264. In the 1270s, the “new” castle was completed, and Herbert Maxwell, the nephew of John Maxwell, occupied it.

When the moat around the second castle was dug, the quarrying was probably a source of building stone for the castle.While the gatehouse stands on a natural rock, the rest of the castle was built on a clay platform created especially for the castle. 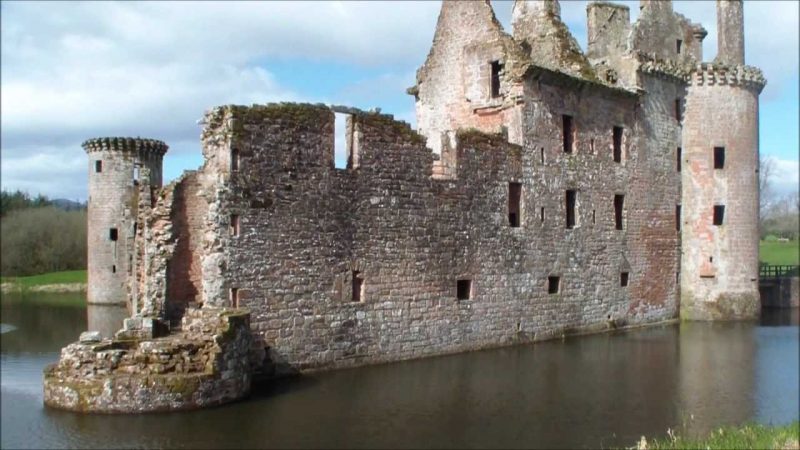 In July 1300 King Edward I of England marched north with an army including eighty-seven of the Barons of England and several knights of Brittany and Lorraine. John of Brittany, Earl of Richmond (c. 1266-1334) was among Edward’s most trusted warriors and is said to have been present. He was a son of the John II, Duke of Brittany who had grown up in Edward’s court and it was said that Edward treated him as a son. The Maxwells, under their chief Sir Eustace Maxwell, made a vigorous defence which repelled the English several times. In the end, the garrison was compelled to surrender, after which it was found that only sixty men had withstood the whole English army for a considerable period. In recent years, Historic Scotland has organised re-enactments of the Siege. During the siege the English heralds composed a roll of arms, the Roll of Caerlaverock, in the form of verses of poetry, each describing the feats of valour of each noble or knight present with a poetic blazon of his armorials.

Possession of the castle was subsequently restored to Sir Eustace Maxwell, Sir Herbert’s son, who at first embraced the cause of John Balliol, and in 1312 received from Edward II an allowance of £20 for the most secure keeping of the castle. He afterwards gave in his adherence to Robert Bruce, and his castle, in consequence, underwent the second siege by the English, in which they were unsuccessful. Fearing that this important stronghold might ultimately fall into the hands of the enemy, and enable them to make good their hold on the district, Sir Eustace dismantled the fortress, a service and sacrifice for which he was liberally rewarded by Robert Bruce.

By 1337, the castle was once again inhabited, and Sir Eustace now changed sides again, giving his support to Edward Balliol. Around 1355, Sir Roger Kirkpatrick of Closeburn captured Caerlaverock for David II of Scotland, and partly dismantled the castle. 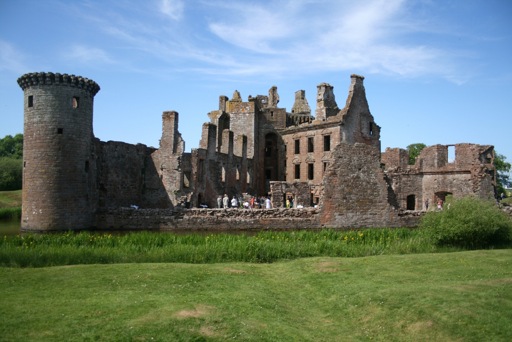 By the end of the Wars of Independence in the mid-14th century, Caerlaverock had been regained by the Maxwells, with Sir Robert Maxwell rebuilding much of the castle between 1373 and 1410. Further work was undertaken by Robert, 2nd Lord Maxwell, in the mid-15th century, probably involving reconstruction of the gatehouse. A new west range was added within the walls around 1500.

The Catholic Maxwells took up the cause of Mary, Queen of Scots, after her forced abdication in 1567. Caerlaverock was besieged in 1570 by an English Protestant force led by the Earl of Sussex and was again partly demolished, including the destruction of the gatehouse with gunpowder.

In 1619 Robert, 10th Lord Maxwell, married Elizabeth Beaumont, cousin of the Duke of Buckingham, a favourite of James VI of Scotland. He was subsequently created Earl of Nithsdale and appointed to the Privy Council of Scotland. To reflect his new status he built the elaborate south and east ranges within the castle, known as the Nithsdale Lodging.