Long before heavy transport and major infrastructure, loggers used the many riverways to transport their logs to the sawmills and to the markets. Timbers rafts were enormous and could contain millions of feet of timber. They could also represent a years worth of work of the cutters and woodsmen.

For example, in 1857, three thousand men were engaged in lumbering on the Wisconsin alone. As all the lumber had to be floated out of the Wisconsin and down the Mississippi, rafting grew into a great business, requiring a breed of hardy, rough, but industrious and reliable men, working under raft pilots. When they reached their destination the raftsmen would take passage on a steamboat going upriver and start work all over again.

When the first sawmills were established, they were usually small water powered facilities located near the source of timber, which might be converted to grist mills after farming became established when the forests had been cleared. Later, larger circular sawmills were developed in the lower reaches of a river, with the logs floated down to them by log drivers. In the smaller, wilder stretches of a river, rafts couldn’t get through, so masses of individual logs were driven down the river like huge herds of cattle droves.

Timber rafts could be of enormous proportions, sometimes up to 600 metres (2000 ft) long, 50 meters (165 ft) wide, and stacked 2 metres (6.5 ft) high. Such rafts would contain thousands of logs. For the comfort of the raftsmen – which could number up to 500 – logs were also used to build cabins and galleys. Control of the raft was done by oars and later on by tugboats.

Raft construction differs depending on the watercourse. Rocky and windy rivers saw rafts of simple, yet sometimes smart, construction. For example, the front parts of the logs were joined together by wooden bars, while the rear parts were loosely roped together. The resulting slack allowed for easy adaptation for narrow and windy waterbeds. Wide and quiet rivers, like the Mississippi River, allowed huge rafts to travel in caravans and even be chained into strings. 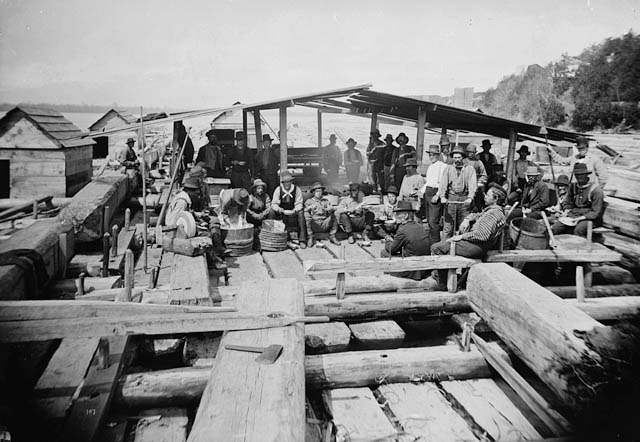 Cookery on J.R. Booth’s raft, circa 1880. The raftsmen cooked, ate and slept on these rafts as they floated down the river. 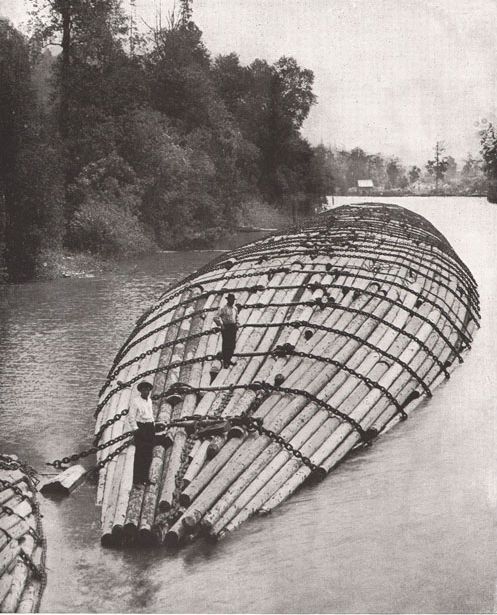 From an interior point on the Columbia River, Oregon. Pine logs in rafts 800 feet long and 52 feet wide are towed 1000 miles via the Pacific Ocean to San Diego, California where they are transformed into lumber. 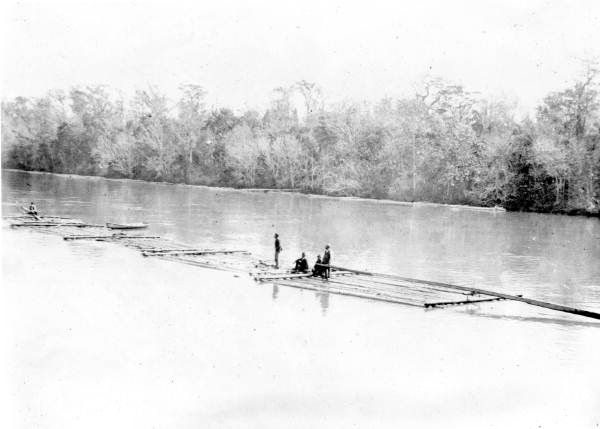 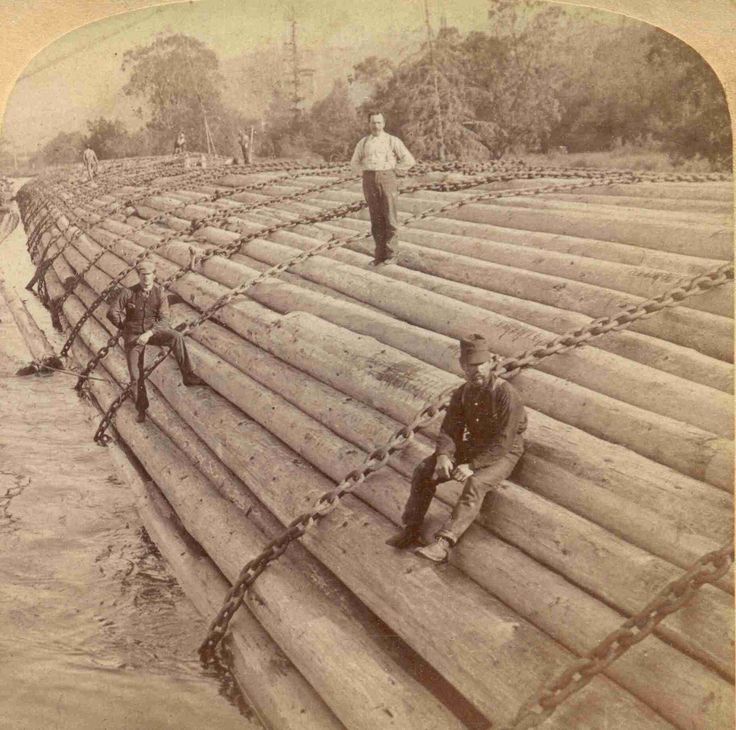 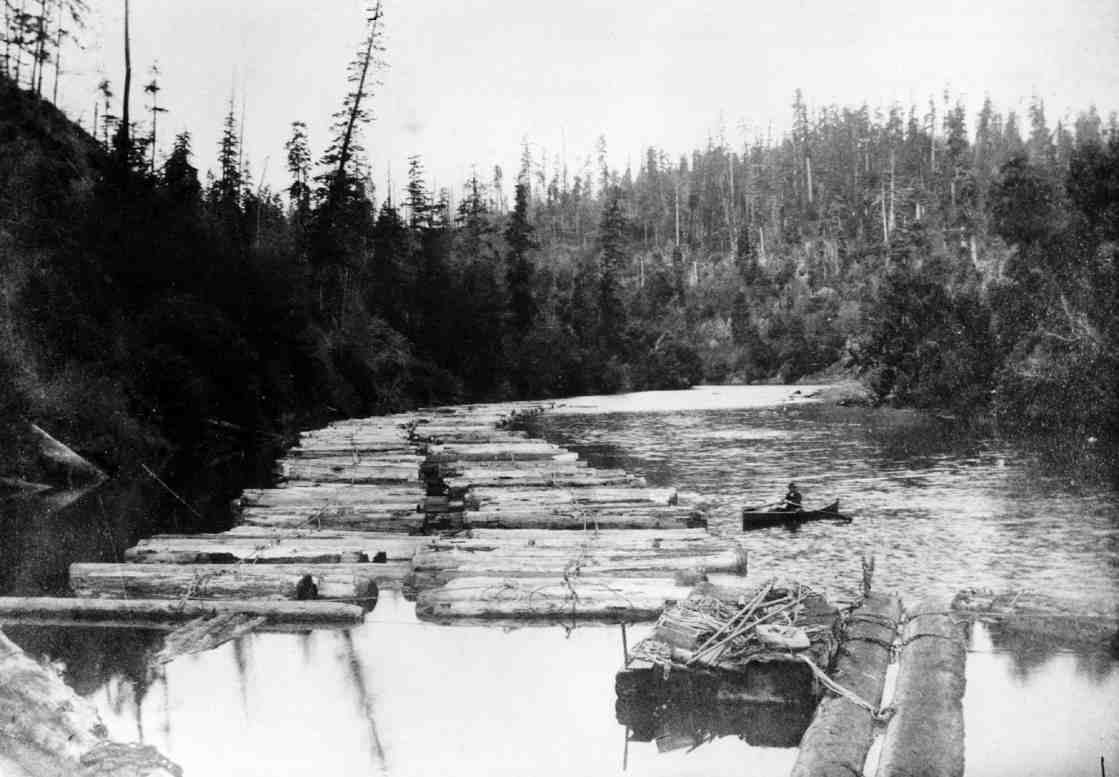 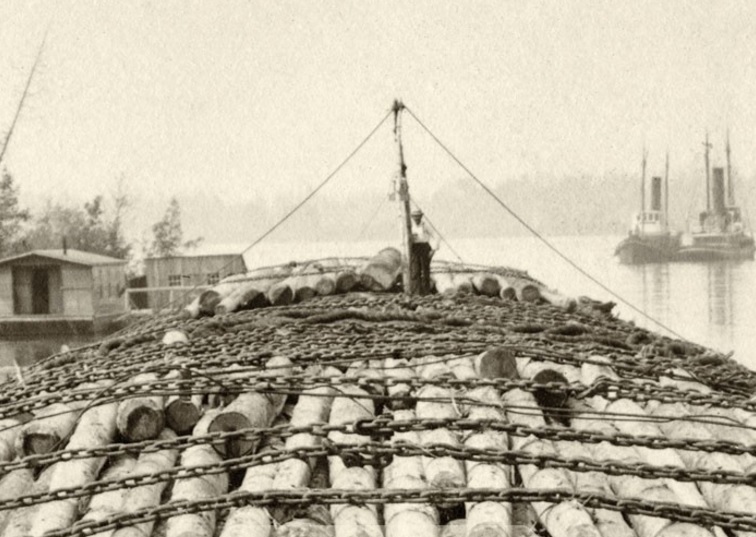 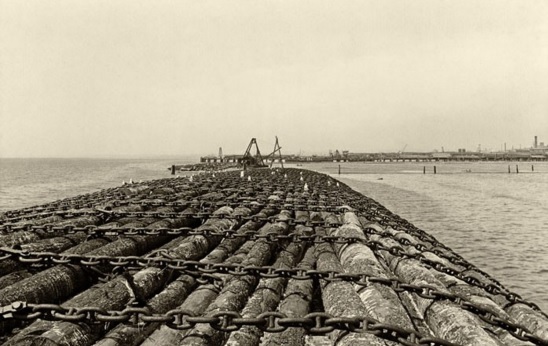 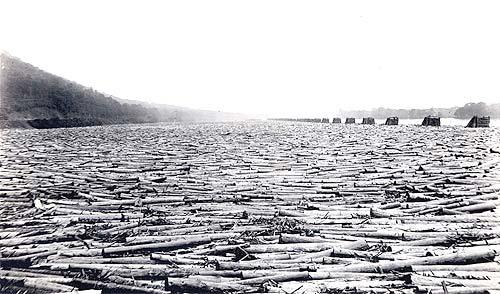 The vast scale of logging. Floating logs down a river worked well for the most desirable pine timber, because it floated well. But hardwoods were more dense, and didn’t float well enough to be easily driven, and some pines weren’t near drivable streams. Log driving became increasingly unnecessary with the development of railroads and the use of trucks on logging roads. However, the practice survived in some remote locations where such infrastructure did not exist. Most log driving in the United States and Canada ended with changes in environmental legislation in the 1970s. Some places, like the Catalonian Pyrenees, still retain the practice as a popular holiday celebration once a year. 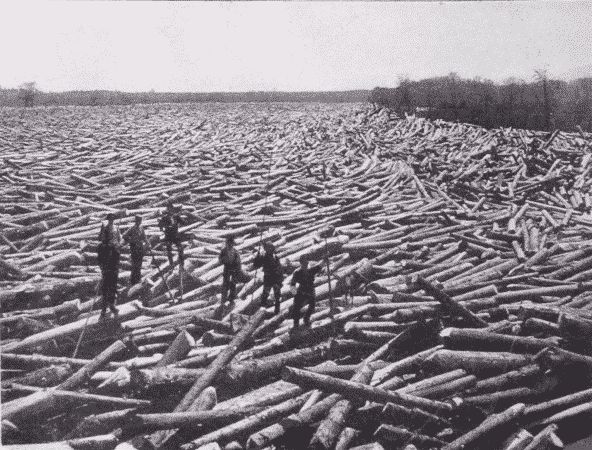 This looks like the river is bank to bank with logs. Have no idea how you manage something so big. Log drives were often in conflict with navigation, as logs would sometimes fill the entire river and make boat travel dangerous or impossible. 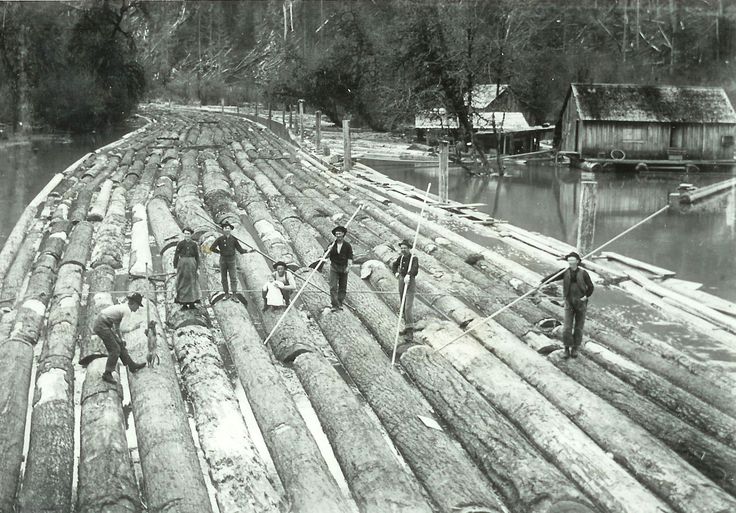 Each crew was accompanied by an experienced boss often selected for his fighting skills to control the strong and reckless men of his team. The overall drive was controlled by the “walking boss” who moved from place to place to coordinate the various teams to keep logs moving past problem spots. Stalling a drive near a saloon often created a cascade of drunken personnel problems.

This practice used to be common in many parts of the world, especially North America and on all main rivers of Germany. Timber rafting allowed for connecting large continental forests, as in south western Germany, via Main, Neckar, Danube and Rhine with the coastal cities and states, early modern forestry and remote trading were closely connected. Large pines in the black forest were called „Holländer“, as they were traded to the Netherlands. Large timber rafts on the Rhine were 200 to 400m in length, 40m wide and consisted of several thousand logs. The crew consisted of 400 to 500 men, including shelter, bakeries, ovens and livestock stables. Timber rafting infrastructure allowed for large interconnected networks all over continental Europe. The advent of the railroad, steam boat vessels and improvements in trucking and road networks gradually reduced the use of timber rafts. It is still of importance e.g. in Finland

Large timber rafts on the Rhine were 200 to 400m in length, 40m wide and consisted of several thousand logs. The crew consisted of 400 to 500 men, including shelter, bakeries, ovens and livestock stables. Timber rafting infrastructure allowed for large interconnected networks all over continental Europe. The advent of the railroad, steam boat vessels and improvements in trucking and road networks gradually reduced the use of timber rafts. It is still of importance e.g. in Finland

Bateaux ferried log drivers using pike poles to dislodge stranded logs while maneuvering with the log drive. A wannigan was a kitchen built on a raft which followed the drivers down the river.The wannigan served four meals a day to fuel the men working in cold water. It also provided tents and blankets for the night if no better accommodations were available. 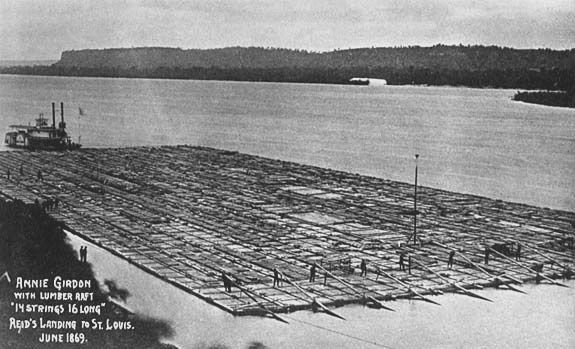 A commissary wagon carrying clothing, plug tobacco and patent medicines for purchase by the log drivers was also called a wangan. The logging company wangan train, called a Mary Anne, was a caravan of wagons pulled by four- or six-horse teams where roads followed the river to transport the tents, blankets, food, stoves, and tools needed by the log drivers. 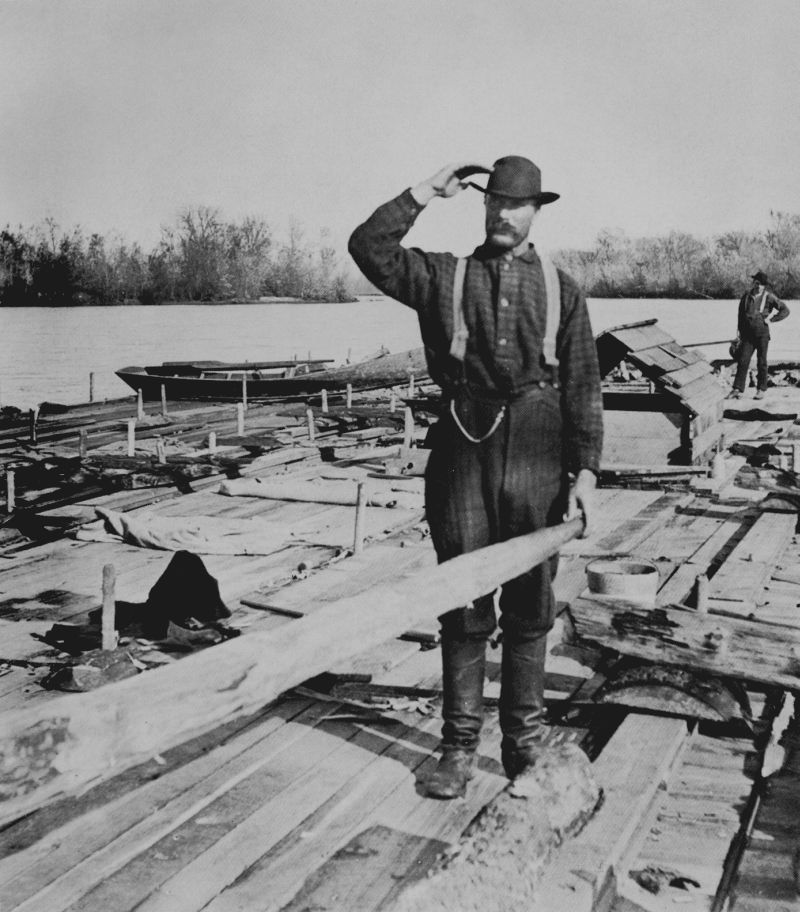 Rafts were assembled in sections. Each section was made up of round or squared timbers, all of the same length except for the outside, or “boom logs,” which extended aft a few feet to enclose the following section. Thus the sections were coupled together. A fairly typical raft would be one of three, four or five sections, each section having timbers twenty to thirty feet in length. 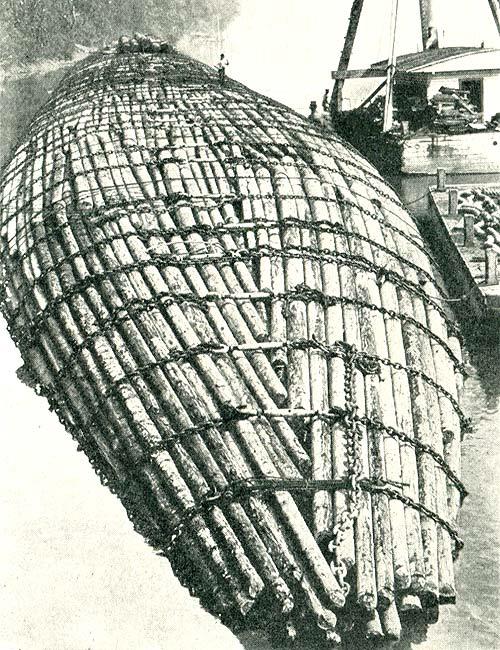 For log drives, the ideal river would have been straight and uniform, with sharp banks and a predictable flow of water. Wild rivers were not that, so men cut away the fallen trees that would snag logs, dynamited troublesome rocks, and built up the banks in places. To control the flow of water, they built “flash dams” or “driving dams” on smaller streams, so they could release water to push the logs down when they wanted 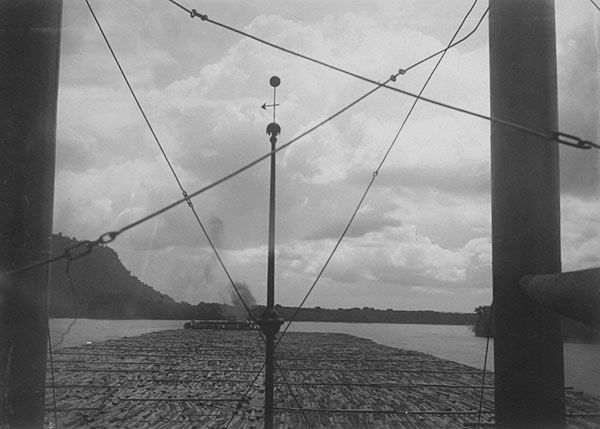 Raft construction differs depending on the watercourse. Rocky and windy rivers saw rafts of simple, yet sometimes smart, construction. For example, the front parts of the logs were joined together by wooden bars, while the rear parts were loosely roped together. The resulting slack allowed for easy adaptation for narrow and windy waterbeds. Wide and quiet rivers, like the Mississippi River, allowed huge rafts to travel in caravans and even be chained into strings. 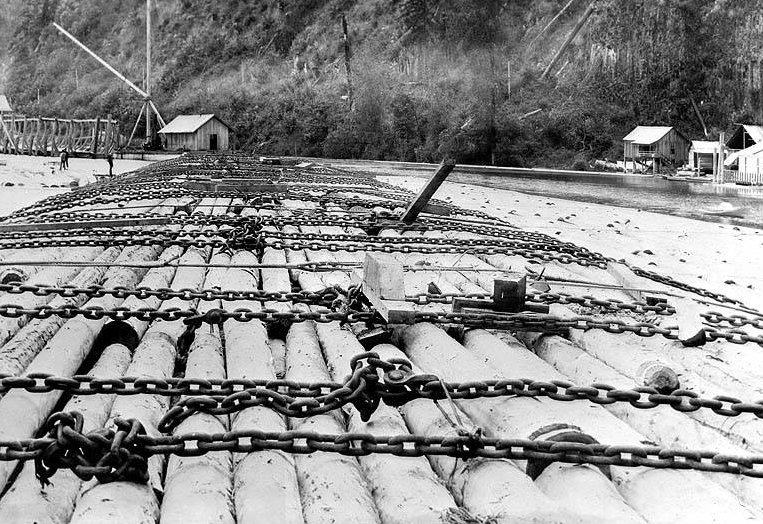 Most rafts were sharp-chute, that is, V-bowed, rather than square-bowed. Raftsmen had learned that with a V-bow a raft was more likely to hold together and glance off if it drifted out of control and hit the river bank. As one old-time raftsman put it: “With a square bow you were compelled to hold the raft in or near the middle of the river: if it butted the hill it would come to pieces. The sharp-chute could be put together so it would not come apart. And it saved a lot of hard work. Raftsmen didn’t mind letting it go to the hill. They’d say: ‘Let’er shoot out.’” 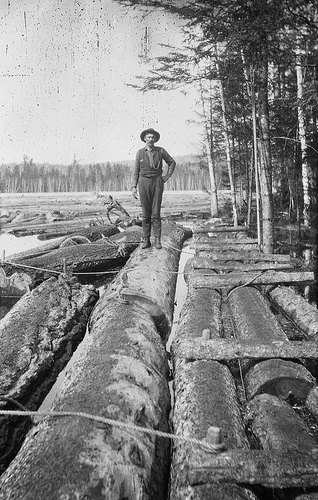 As the era of rafting receded into the past, old men recalling old times on the river talked so much about how boisterous some raftsmen were, about how ready they were for fight or frolic and, whichever, the rougher the better, and about the pranks they pulled and yarns they told—as to give the impression that that’s the way most all raftsmen were. It was a wrong impression, of course. Even so, old timers perpetuated it because in describing river life years later they tended to romanticize it—which is not surprising since they had found on the river and in Darien more than a way to make a little money, they had found a way to escape the drudgery and monotony of life in the backwoods.