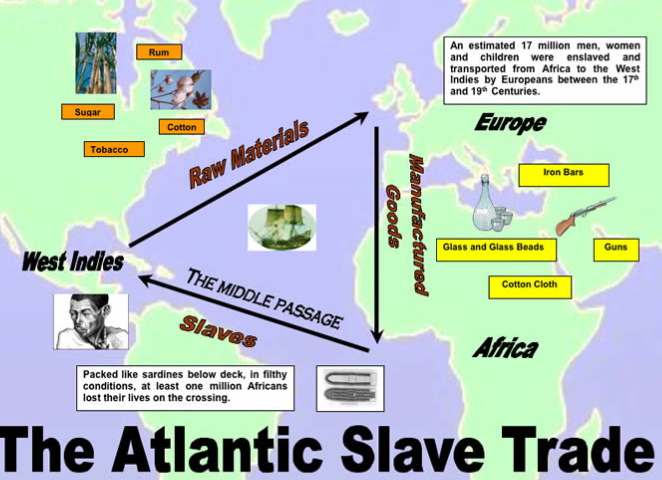 A recently published interactive graphic demonstrates in stark manner the sheer scale of the transport of slaves from Africa to the Americas, between about 1550 and about 1860. Over this period of little more than 310 years, more than ten million Africans were seized, transported under terrible conditions across the ocean to the “Western Hemisphere” and forcibly traded into slavery.

The trans-Atlantic trade in humans had begun in the 16th century. Sailing ships were packed to the brim with African men and women who had been seized from their communities in Africa by a variety of different slave-traders, some European, some Arab and some themselves African.

The trade gathered pace over the succeeding 300 years, before the practice of trading in humans was finally abolished in the middle of the 19th century. By the time it was brought to an end, more than 20,500 trans-Atlantic voyages had moved many millions of Africans to the shores of the North American and South American continents.

When considering the slave trade, it is natural to think mainly of the United States of America, because slavery continued there until relatively recently. Even after the American Civil War brought an end to the official institution of slavery in the 1860s, some historians and sociologists have argued that the so-called Jim Crow laws in the USA, which imposed racial segregation and inferior status on African Americans from 1888 until they were finally abolished in 1965, represented a form of economic, mental and social slavery.

However, it is misleading to think only of the USA in connection with the slave trade. In numerical terms, other regions in both of the American continents received and enslaved more Africans than the USA. The USA received about 400,000. Central America, mainly under Spanish control, received about 1,300,000. The Caribbean colonies, controlled by France, Great Britain, the Netherlands and Denmark, together received about 4,000,000. Brazil, under Portuguese rule, received a whopping 4,800,000.

The journey from Africa to those far-off lands was fraught with great peril and cruelty. Sailing ships were packed to the brim with African men and women who had been seized from their communities in Africa by slave-traders. People died of sickness, maltreatment and sheer exhaustion en route. Those who survived the hazardous crossing were condemned to a life of bondage and slavery, never to see their communities, families and home countries again. 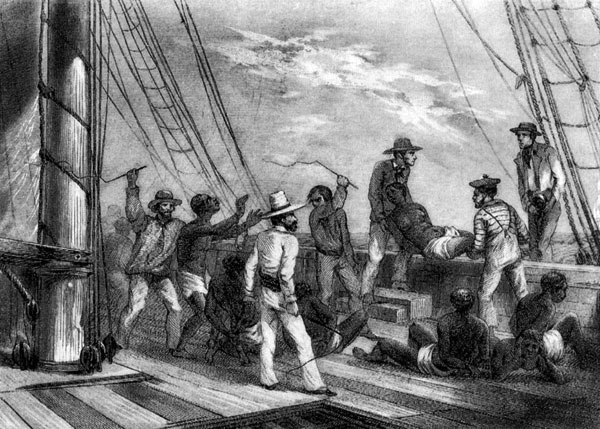 Slaves being moved to the coast of Africa destined for St. Domingue, 1786.

The trans-Atlantic slave trade has been documented by many institutions and educational and academic establishments and institutions over the years. One such programme is that of the Trans-Atlantic Slave Trade Database. This brings together many years of research and the collection of information from libraries, museums, academies and other bodies.

A great many experts in slavery from South American, European, African and North American universities and other institutions have combined their efforts to create a “voyages” website. This documents in fine detail as much information as is known about the 20,500 sea voyages involved in the trade. It presents this  information in detailed and engaging interactive graphic. Funding for this immense enterprise came from a variety of institutions around the world.

The interactive graphic shows a map of the Atlantic Ocean and surrounding land masses. It features a time line for the 315 years of the nefarious practice. As the user moves the time line, dots representing slave ships can be seen scuttling across the Atlantic Ocean, from African to the various destinations in South and North America. Pausing the time line allows the user to click on each dot, which brings up a pop-up box with details about the ship, its owners, its human cargo of African slaves and other information. As you move the time line forward, it is striking how the number of ships grows ever greater, until by the late eighteenth and nineteenth centuries, there is a frenzied acceleration in the numbers of ships pouring forth out of Africa, to deliver their valuable human cargoes. The graphic excludes partial or uncertain records, so the actual numbers are greater than depicted in the graphic.

It is notable that the trade is dominated at first by Spain and Portugal, in the 16th and 17th centuries. Later, from the early 1700s to the early 1800s, other major trading nations join in and take over as the dominant transporters. They include France, Great Britain and the Netherlands. Even the United States of America was joining in the trans-Atlantic activity from the late 18th century onward. At about this time, Spain’s involvement tails off. Spain’s role picks up again as those other nations start to cut back in the early 19th century. Portugal continues to increase its trade throughout the entire period, resulting in the very high number of slaves taken to Brazil. In all, at least 12,500,000 Africans were enslaved and it is estimated about 2,000,000 died on the high seas.