The Golden Gate Bridge could’ve been a tunnel…… 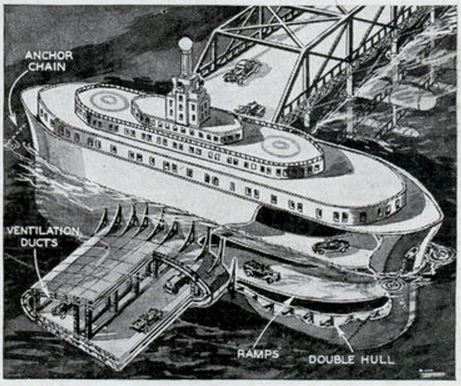 Just think, what people know as today’s Golden Gate Bridge could have looked completely different.  In 1932, there was a man named Cleve F. Shaffer who had different ideas for the bridge’s design.  He had proposed that the center of the bridge should be submerged in San Francisco Bay, which would have allowed ships to travel safely by passing above it.  Shaffer’s idea was known as the boat tunnel.  The tunnel would have run right through the center of the bridge.  People who knew Shaffer said he had so many brilliant ideas, but did not gain fame from them.  Many people believed that he foresaw the tank, bazooka, and even the moving sidewalk.  He had many brilliant ideas.

While the Golden Gate Bridge’s first design by Shaffer seemed odd, it also appealed to many.  Shaffer’s plan was thought to only cost a third of the original $35 million dollar budget.  It would have truss spans on both ends that leaned inwards into sections floating on pontoons.  Interior ramps would then crisscross the interior.  If one traveled down one ramp, it would have taken a vehicle 45 feet below the waterline.  The car would then travel to the other ramp and then go up to the surface by a 1,200 foot long tube.  What people saw as an issue would have been the deceleration that would have been needed to enter the ramp areas.  This would have caused a gridlock.  In order to protect against the currents, Shaffer offered the idea of building a resilient chain barrier that would be hung from anchored buoys that carried lights and sound warnings.  Many are not sure why Shaffer’s whole idea was abandoned at one point.  Today, the ships just pass under the bridge, guided by foghorns.

Plans for the bridge were initiated after the 1849 Gold Rush.  Many people who worked in the Gold Rush believed that San Francisco Bay would increase in value if there was an easy way for accessibility to the city.  There were plans to make a 400-foot deep strait that would connect the San Francisco Peninsula to the southern end of Marin County. 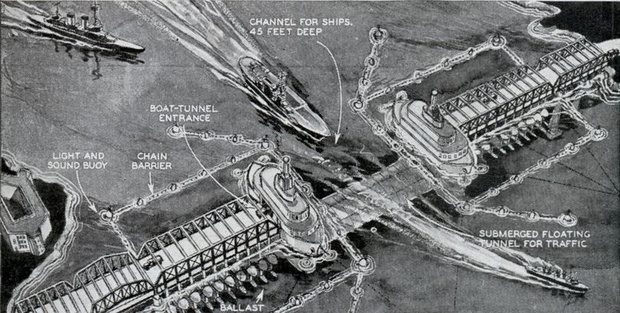 PROPOSED as a substitute for the suggested Golden Gate suspension bridge at San Francisco is an ingenious boat tunnel of unique design which, it is claimed, can be built for one-third the estimated $35,000,000 cost of a suspension bridge. This and other advantages of the design have led authorities to consider seriously the erection of the boat tunnel bridge, which would be the only one of its kind in the world. It was conceived by Cleve F. Shaffer of San Francisco.

It wasn’t until 1916 that real ideas started to be discussed.  James Wilkins, an engineering student, said that there should be a suspension bridge with a center span of 3,000 feet, which would have been twice the length of any other bridge.  If that idea had been approved the bridge would have cost nearly $100 million.

Michael M. O’Shaughnessy, who came up with the name Golden Gate Bridge, had decided to ask other engineers if they could come up with a design that would cost less than Wilkins’ idea.  Out of those entries came an idea from Joseph Strauss.  O’Shaughnessy and Strauss ended up coming up with a suspension bridge that would cost about $25 to $30 million with a span of 4,000 feet.  By the time the obstacles were cleared and laws were passed, the Great Depression of 1929 had begun.  This resulted in limited finances.   In order for the bridge to be built, it would have to create jobs.  The bonds couldn’t be sold until 1932 and that is when Bank of America decided to buy the entire project to help out the economy.

On January 5, 1933 construction to build the Golden Gate Bridge began.  Construction workers started excavating nearly 3.5 million cubic feet of dirt for the anchorages for the structure.  Once completed, the bridge opened on May 27, 1937.  The bridge was the longest span in the world at the time. The first crossing of the bridge had taken place the day before when people ran, walked, and even rollerbladed across it.

« King’s Farm in Faroe Island is the oldest still inhabited wooden house of the world
Great Gustav- Nazi created the largest and deadliest gun in the world! »