“The desire to fly is an idea handed down to us by our ancestors who, in their grueling travels across trackless lands in prehistoric times, looked enviously on the birds soaring freely through space, at full speed, above all obstacles, on the infinite highway of the air.” – Orville Wright

Since 1899, Wilbur and Orville Wright had been scientifically experimenting with the concepts of flight. In May 1899, Wilbur wrote a letter to the Smithsonian Institution requesting information and publications about aeronautics. Drawing on the work of Sir George Cayley, Chanute, Lilienthal, Leonardo da Vinci, and Langley, they began their mechanical aeronautical experimentation that year. The Wrights based the design of their kite and full-size gliders on work done in the 1890s by other aviation pioneers. They adopted the basic design of the Chanute-Herring biplane hang glider (“double-decker” as the Wrights called it), which flew well in the 1896 experiments near Chicago, and used aeronautical data on lift that Lilienthal had published. They built printing presses and in 1892 opened a bicycle sales and repair shop. Soon, they were building their own bicycles, and this experience, combined with profits from their various businesses, allowed them to pursue actively their dream of building the world’s first airplane. 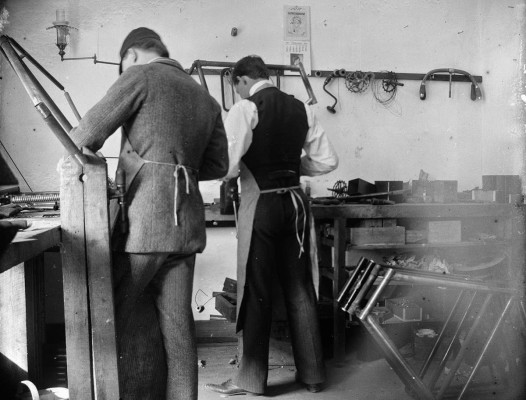 Orville Wright and Edwin H. Sines, neighbor and boyhood friend, filing frames in the back of the Wright bicycle shop in 1897.

The brothers flew the glider for only a few days in the early autumn of 1900 at Kitty Hawk. In the first tests, probably on October 3, Wilbur was aboard while the glider flew as a kite not far above the ground with men below holding tether ropes. Most of the kite tests were unpiloted, with sandbags or chains and even a local boy as ballast. They tested wing-warping using control ropes from the ground. However, the small number of free glides meant they were not able to give wing-warping a true test. 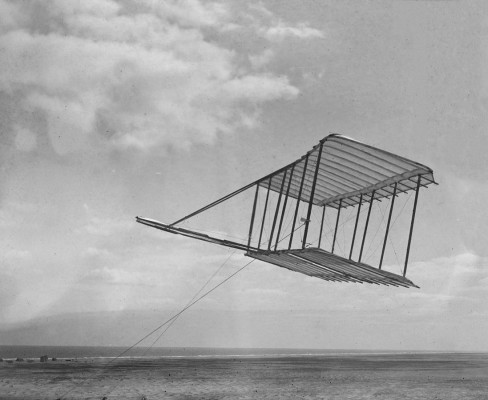 The 1900 glider. No photo was taken with a pilot aboard. 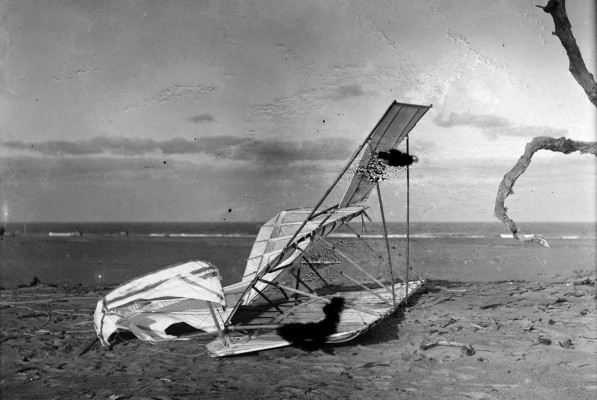 Hoping to improve lift, they built the 1901 glider with a much larger wing area and made dozens of flights in July and August for distances of 50 to 400 ft (15 to 122 m). The glider stalled a few times, but the parachute effect of the forward elevator allowed Wilbur to make a safe flat landing, instead of a nose-dive. The poor lift of the gliders led the Wrights to question the accuracy of Lilienthal’s data, as well as the “Smeaton coefficient” of air pressure, a value which had been in use for over 100 years and was part of the accepted equation for lift. 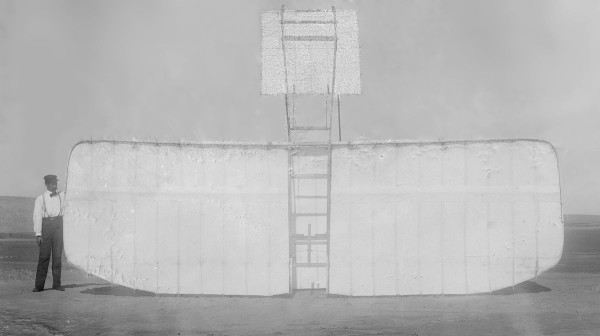 Orville with the 1901 glider, its nose pointed skyward; it had no tail. 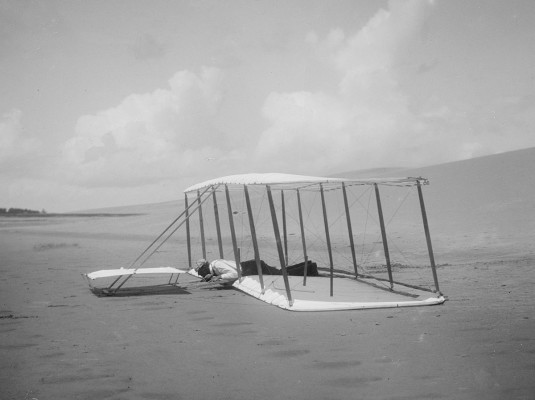 Wilbur just after landing the 1901 glider. Glider skid marks are visible behind it, and marks from a previous landing are seen in front; Kill Devil Hills, North Carolina.

By 1902, they realized that wing-warping created “differential drag” at the wingtips. Greater lift at one end of the wing also increased drag, which slowed that end of the wing, making the glider swivel – or “yaw”—so the nose pointed away from the turn. The improved wing design enabled consistently longer glides, and the rear rudder prevented adverse yaw – so effectively that it introduced a new problem. Sometimes when the pilot attempted to level off from a turn, the glider failed to respond to corrective wing-warping and persisted into a tighter turn. The glider would slide toward the lower wing, which hit the ground, spinning the aircraft around. The Wrights called this “well digging”. 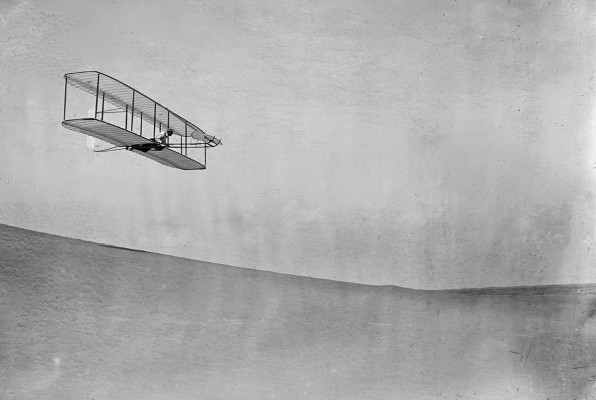 Wilbur Wright pilots a full-size glider down the steep slope of Big Kill Devil Hill in Kitty Hawk, North Carolina, on October 10, 1902. This model was the third iteration of the Wright brothers’ early gliders, equipped with wings that would warp to steer, a rear vertical rudder, and a forward elevator. 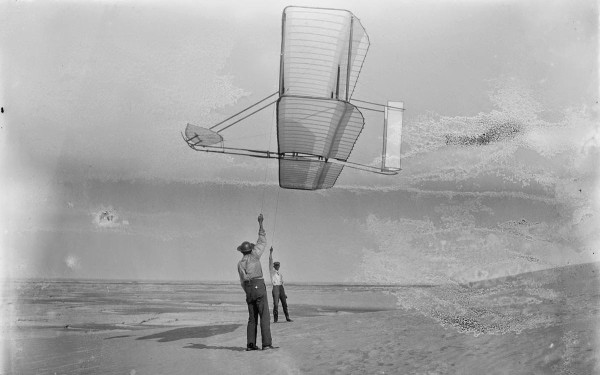 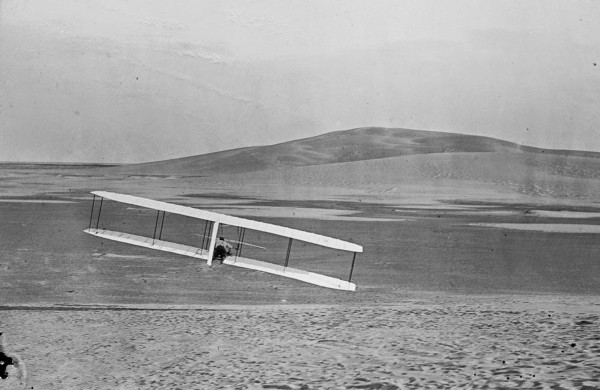 Rear view of Wilbur making a right turn in a glide from No. 2 Hill, right wing tipped close to the ground, October 24, 1902. 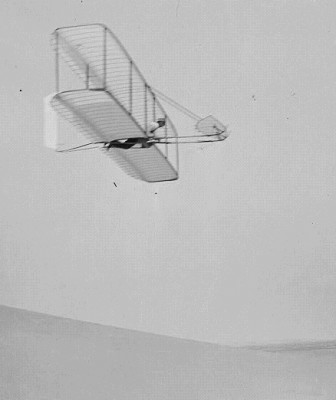 Start of a glide; Wilbur in motion at left holding one end of the glider (rebuilt with single vertical rudder), Orville lying prone in the machine, and Dan Tate at right, in Kitty Hawk, North Carolina, on October 10, 1902.

Orville and Wilbur Wright made the first controlled powered and sustained heavier-than-air human flight on December 17, 1903, at Kill Devil Hills, North Carolina. The brothers built the powered Wright Flyer I, using their preferred material for construction, spruce, a strong and lightweight wood, and Pride of the West muslin for surface coverings. They also designed and carved their own wooden propellers, and had a purpose-built gasoline engine fabricated in their bicycle shop. The modern aviation age was born. Three more tests were made that day, with Wilbur and Orville alternately flying the airplane. Wilbur flew the last flight, covering 852 feet in 59 seconds. 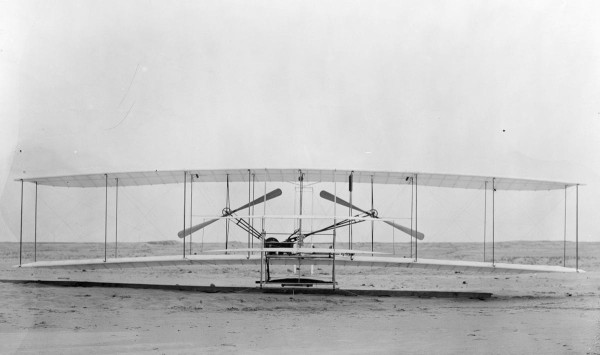 The Wright Flyer I, built in 1903, front view. This machine was the Wright brothers’ first powered aircraft. The airplane sported two 8 foot wooden propellers driven by a purpose-built 12 horsepower engine. 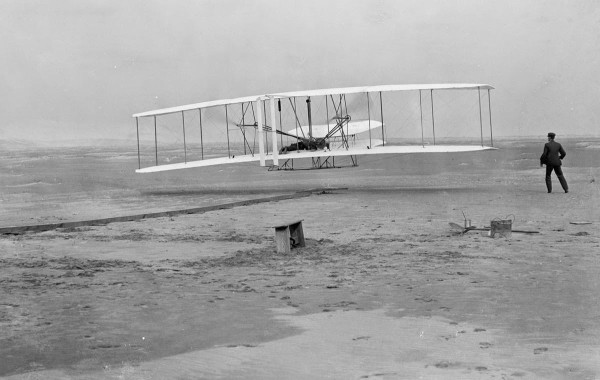 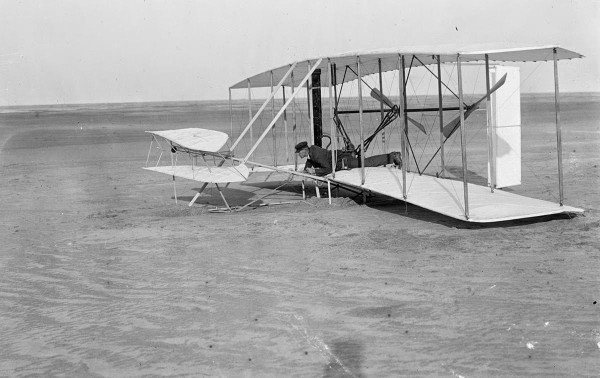 Wilbur Wright at the controls of the damaged Wright Flyer, on the ground after an unsuccessful trial on December 14, 1903, in Kitty Hawk, North Carolina.

In 1904, the Wrights built the Flyer II. The first flights in 1904 revealed problems with longitudinal stability, solved by adding ballast and lengthening the supports for the elevator. Their two best flights were November 9 by Wilbur and December 1 by Orville, each exceeding five minutes and covering nearly three miles in almost four circles. 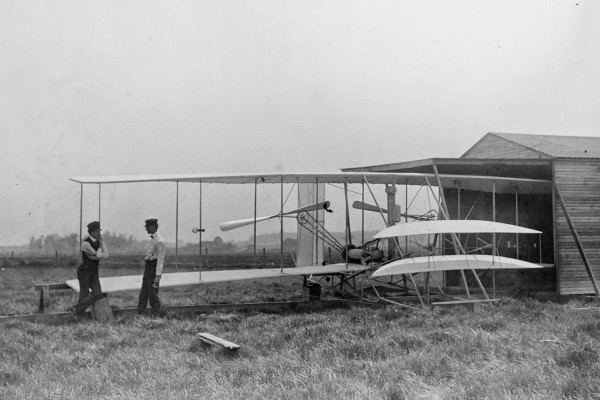 Wilbur and Orville Wright with their second powered machine on Huffman Prairie, near Dayton, Ohio, in May of 1904. 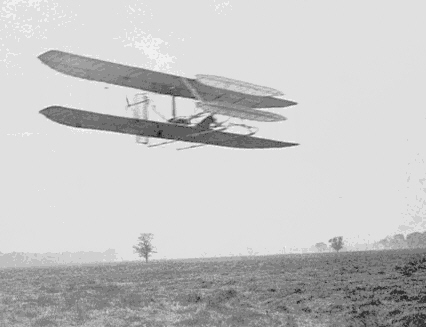 By the end of the year, the brothers had accumulated about 50 minutes in the air in 105 flights. By 1905, their aircraft could perform complex maneuvers and remain aloft for up to 39 minutes at a time. The Wrights scrapped the battered and much-repaired aircraft, but saved the engine, and in 1905 built a new airplane, the Flyer III. Its maiden flight was on June 23 and the first few flights were no longer than 10 seconds. 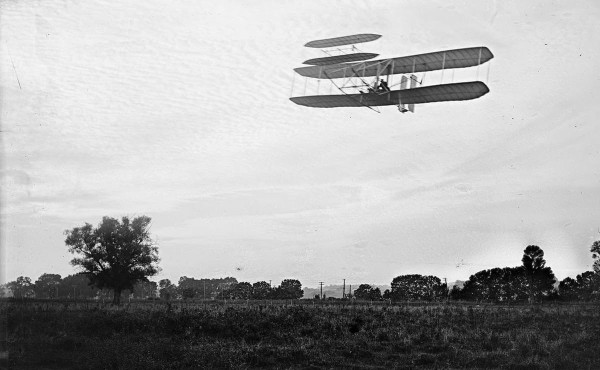 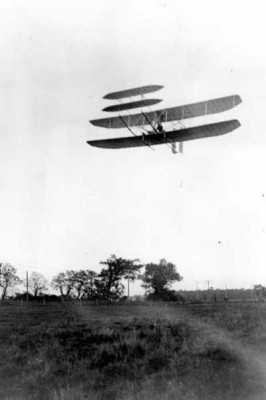 In 1908, the brothers traveled to France and made their first public flights, arousing widespread public excitement. 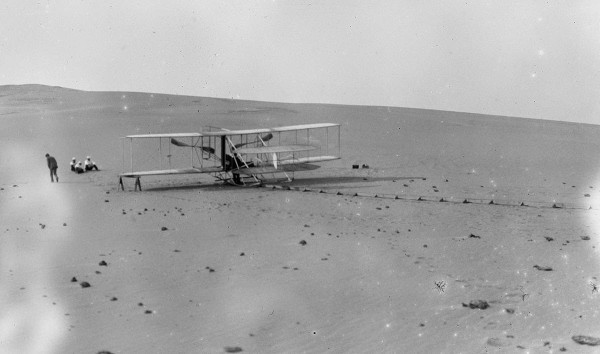 The remodeled 1905 Wright machine, altered to allow the operator to assume a sitting position and to provide a seat for a passenger, on the launching track at Kill Devil Hills in 1908. 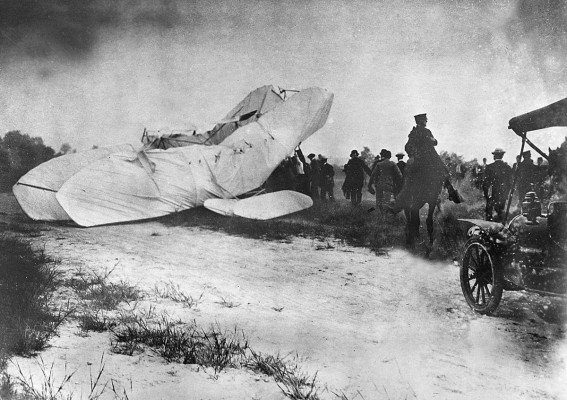 Troops of the U.S. Army Signal Corps rush to the site of a crashed plane to recover the pilot Orville Wright and his passenger, army observer Lieutenant Thomas E. Selfridge, from the wreckage on September 17, 1908, in Fort Myer, Virginia. The plane crashed during a demonstration flight at a military installation, making Lt. Selfridge, who died from his injuries, the first fatality of a military airplane crash. Orville suffered a broken left leg and four broken ribs. 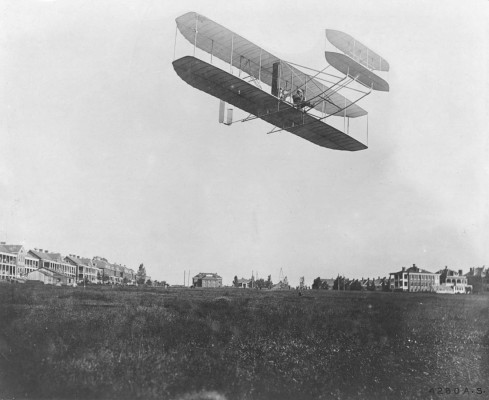 In July 1909 Orville, with Wilbur assisting, completed the proving flights for the U.S. Army, meeting the requirements of a two-seater able to fly with a passenger for an hour at an average of speed of 40 miles an hour (64 km/h) and land undamaged. They sold the airplane to the Army’s Aeronautical Division, U.S. Signal Corps for $30,000 (which included a $5,000 bonus for exceeding the speed specification). 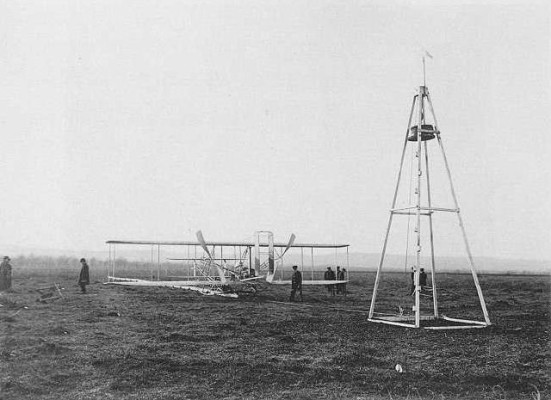 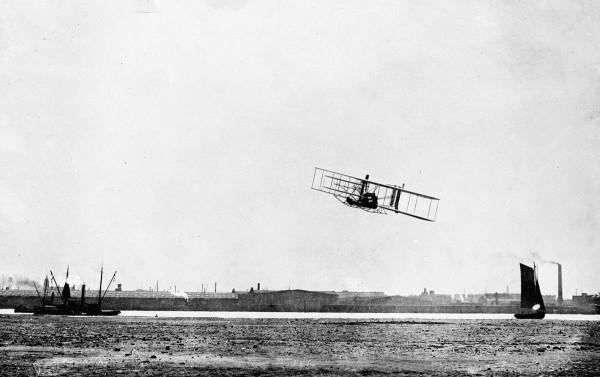 Wilbur Wright makes a 33-minute-long flight during the Hudson-Fulton Celebration in New York in 1909. Wright started from Governors Island to fly up the Hudson River to Grant’s Tomb and back, a feat witnessed by hundreds of thousands of New York residents. 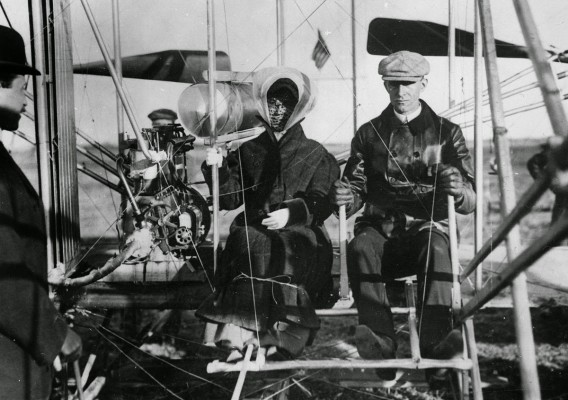 Siblings Orville Wright, Katharine Wright, and Wilbur Wright at Pau, France. Miss Wright about to be taken for her first ride in an airplane. February 15, 1909. 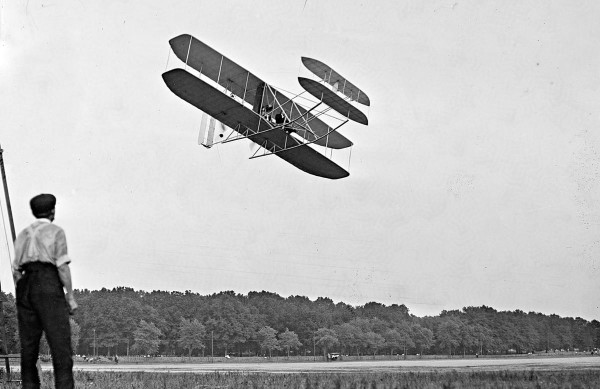 Orville Wright during proving flights for the U.S. Army at Fort Myer, Virginia, in July of 1909. The Wright brothers were able to sell their airplane to the Army’s Aeronautical Division, U.S. Signal Corps.

After six years of work, the brothers finally had a practical working airplane and began to market it to the War Department. One of the reasons for Wright brothers unique place in history is that they continued to work on and improve their designs. Even today, more than a century later, planes and pilots continue to use the same basic skills and control system developed by the famous brothers. They do deserve credit for making a controlled sustained powered flight in a craft that can rightfully be considered – the world’s first successful airplane.

« A rare peek inside the Harley-Davidson factory of the yesteryear
WWII: For nearly 39 years, parts of skeletons were being washed ashore – SS Cap Arcona was carrying around 5,500 concentration camp inmates »