The lost story of the victorian Titanic 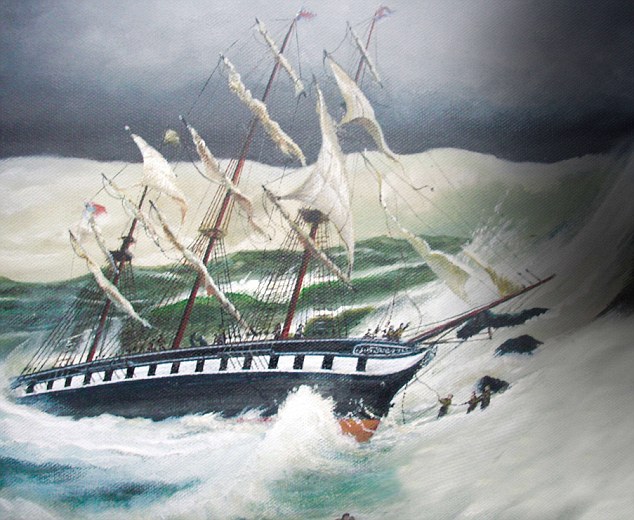 Dashed on the rocks: 360 perished when RMS Tayleur, the most modern ship of its time, sank off the Irish coast

One of the worst shipwrecks in history took place over 160 years ago.  Reading this, many people probably think it could only be the Titanic; that the Titanic sinking is the worst shipwreck of all time.  However, that is not the case.  The ship that sunk decades ago was called the RMS Tayleur.

The story starts out with the ship making its voyage through the ocean on a day so gloomy that it was hard to see what was ahead.  Within a split second, there was an alarming sound followed by a thud that shook the ship entirely.  Considering it was during the night, many of the passengers ran up to the deck in their pajamas to see what was going on, only to realize there was water seeping in and the boat was sinking fast.

After the passengers realized the ship was going down utter chaos quickly followed.  Women were crying and screaming for help.  There were fathers that strapped their children onto their backs and others that ran back to the lower decks to retrieve their families and their belongings.  To add to the chaos, people fought for the last remaining life jackets.  Just a matter of hours later, the ocean was scattered with bodies.  The ship was nowhere to be seen, having sunk completely.

Again, just like the Titanic, builders had promised that the ship was bigger, faster, and safer than any other ship.  The RMS Tayleur was one of the largest merchant vessels in Britain at the time.  The passengers were also ensured that they had one of the best captains around.

In total, the disaster managed to take 360 lives out of the 650 crew members and passengers.  The January 1854 sinking had shaken the faith of many.  Most of the people who were on the ship had plans of making a new, better life for themselves in Australia.

Apparently, there were many rumors that the ship was off to bad start before launching off on its journey.  The head engineer of the ship, Charles Tayleur, had been absent due to his wife’s death. Many saw this as the first warning of what would happen to the ship.

Another bad omen people witnessed was when the captain, John Noble, fell 25 feet from the forecastle into the ship’s hold.  Although he said he was not hurt, he was badly shaken from the fall.  Due to that, a different captain had to take the ship from Warrington, where it was built, down the Mersey to Liverpool, where it would eventually begin its journey to Melbourne, Australia.  It would later prove to be an issue because Noble was not initially able to get a feel for how the ship handled.

Yet another odd thing about his voyage was that the design was untested.  It was also not customary that ships would undergo sea trials right before the main voyage.  The RMS Tayleur was powered solely by sail and the three masts were further apart than normal, which may have caused the ship to be unbalanced and hard to handle.  Also, the rudder was quite small for the enormous size of the ship; this would have made the ship hard to steer and change directions. To add to all of the imperfections, the compass had three different readings due to interference from the iron hull. 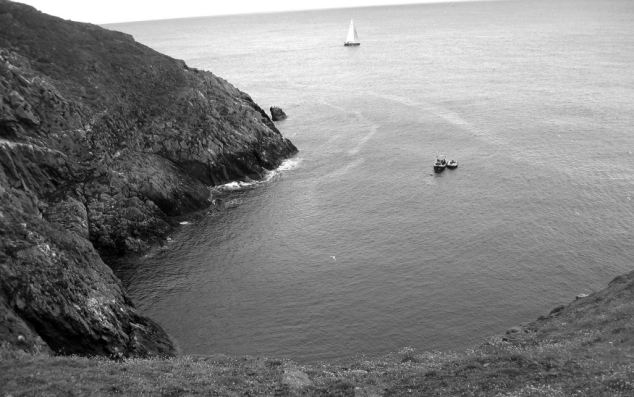 A view of the wreck site from the top of Lambay’s cliffs. The small boat is tethered to what remains of RMS Tayleur

Some might wonder why in the world was the ship even allowed to set sail. Many believe that Tayleur was under an immense amount of pressure to finish the design and wanted to set sail as soon as possible.  But this voyage seemed doomed from the beginning.  Adding to the design issues and bad omens, a majority of the crew members were not at their posts when the ship took off, due to the fact that they were hungover or still drunk from the night before.  What’s worse is that more than half of the 70-men crew were inexperienced and some couldn’t speak English.  Captain Noble even admitted that of the 70 men, he could only really rely on about fifteen. 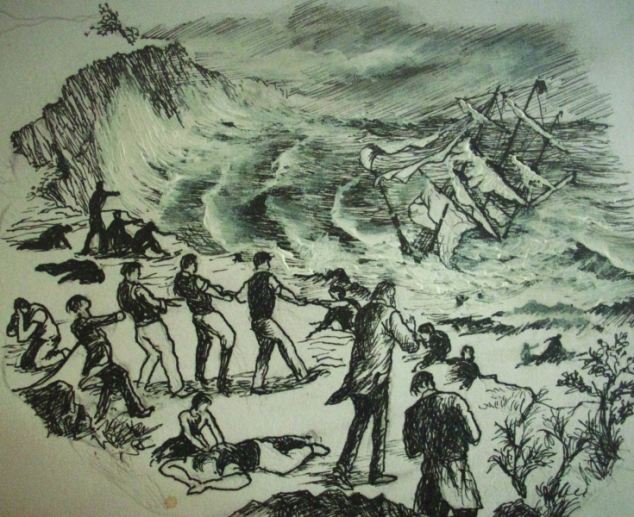 The Sinking Of RMS Tayleur by Gill Hoffs, vividly tells the story of the Tayleur’s demise and reveals a compelling theory behind what caused this supposedly perfect ship to sink

As this story continues, it is amazing that ship got as far as it did.  Some of the crew members were so incompetent that the passengers with seafaring experience had to help reel in sails.  The first night one of the sails tore, making the captain so worried he stayed awake the whole night.  The ropes that controlled the sails kept jamming because they were so new and stiff.  With the malfunctioning compass, Noble tried to determine where the ship was by using the sun and a sextant.  But the weather was too foggy, leaving him to guess the ship’s location.  This made Noble believe that they were heading south when they were actually heading west towards Ireland.  Some of his passengers and crew members begged Noble to turn around or change direction, but he refused.  By then, the Tayleur was heading through massive waves and throwing around its passengers.

At 11 am on January 21st, a sailor had cried “Land-ho.” However, it turns out the land was in fact rocks that were less than a mile away.  Noble tried turning the ship, but the wind was too strong, and with the rudder’s being too small, it was nearly impossible to steer.

The crew tried to help steer with the sails by turning them by hand.  Unfortunately, the sails ended up jamming.  That is when passengers began running on deck.  Noble tried making an announcement for the passengers to help control the sails, but with the thundering waves, it was difficult for anyone to hear him.

One of the steerage passengers had stated that the crew members were acting worse than the women during the time of panic.  Since the crew and passengers could not control the sails, Noble had ordered that both of the anchors be dropped to try to stop the ship from hitting the rocks near the Isle of Lambay.  Once again, the ship proved to have rotten luck.  The anchors ended up snapping clean and the ship continued to make its way toward the rocks.

In a last act of desperation, Noble tried to steer the ship to hit sideways so that the rocks would hit the side first, possibly giving the passengers the time to crawl out of the ship and onto the rocks.  It worked, but the waves ended up smashing the boat into the rocks a second time, sinking the ship stern first.

Oddly, nobody seemed to attempt to lower the lifeboats.  Of course, there wouldn’t have been enough to save everyone anyway, or it could have been the lifeboats would not have survived in the waves.  Not knowing what to do, passengers huddled onto the top deck where it proved to be dangerous.  The waves either washed them away to drown or crushed them. 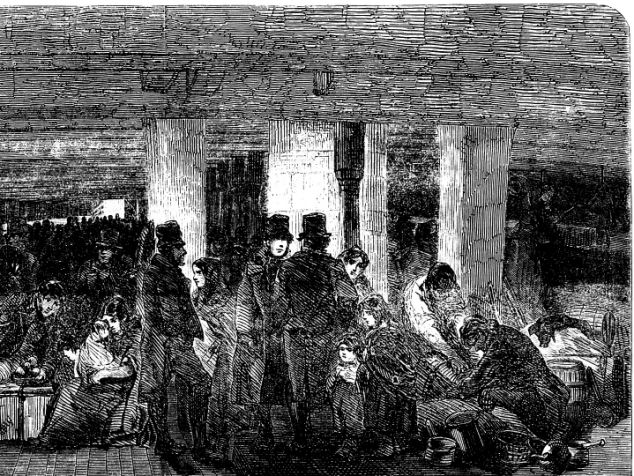 Poignantly, many of the victims were young, setting out for a new life in Australia, carrying with them their hopes for the future and their life savings

One man had tried to jump onto the rocks, but smacked his head against them and drowned. The second person to try to make it onto the rocks was a Welsh miner who tied the rope around an outcrop, managing to help 15 people cross onto the rock safely. In an act of hysteria, too many people grabbed onto the rope, snapping it. Ten of those people fell to their death.  After that, someone had attempted to use a board to make a shoddy bridge for people. However, once again, there were too many people crawling on it, snapping it.

Sadly, there was no “women and children first” rule – it was every man for himself and many women and children ended up dying.  Some women died because of their petticoats, underskirts, and hoops, which caused the women to be pulled down by the weight of everything.

Many people that survived had to watch their family members drown one by one in the chaos that followed the crash.  The devastating thing is that the survivors had to live with that in the back of their minds.  One German doctor tried saving his two children and wife, but failed to do so.  While trying to save a woman from the ship, he ended up being pulled down with her and they both died.  One baby on deck was either abandoned or its parents were swept away, so one elderly German man risked his life for the child’s.  Amazingly they both made it to the rock, the man suffering only a broken arm.

Captain Noble and his first mate were the last ones on the ship.  The first mate ended up drowning, but Captain Noble managed to survive.  From the rock, Noble watched his ship sink, along with one man who was still clinging to the top of the mast.  Surprisingly, the man was saved nearly 14 hours later.

The people who were stranded on the rock had to watch as hundreds of bodies floated to the surface.  Some of them floated onto the beach; many of them were mutilated beyond recognition and some were missing limbs or heads.  When the deaths were counted, all but three of the 100 women had survived and all but three of the 70 children survived.

Sadly, many people blamed Captain Noble, not Charles Tayleur.  One psychologist believes that the fall he sustained, paired with the exhaustion he suffered from staying awake for two days straight, had clouded his judgment.  No one even thought about the Tayleur’s design playing a factor in the travesty.  Obviously, the ship had many imperfections that should have prevented it from sailing in the first place.