If you follow us regularly, by now you surely got the idea that we are suckers for abandoned old ruins that were once lavish and splendid structures. While, we have seen a fair share of an amazing, breath-taking, soul-crushing ruined buildings, Holyrood Abbey succeed to astound us.

The crumbilng old marvel is a ruined abbey of the Canons Regular in Edinburgh, Scotland.The abbey was founded in 1128 by King David I. During the 15th century, the abbey guesthouse was developed into a royal residence, and after the Scottish Reformation the Palace of Holyroodhouse was expanded further. The abbey church was used as a parish church until the 17th century, and has been ruined since the 18th century. The remaining walls of the abbey lie adjacent to the palace, at the eastern end of Edinburgh’s Royal Mile. The site of the abbey is protected as a scheduled monument 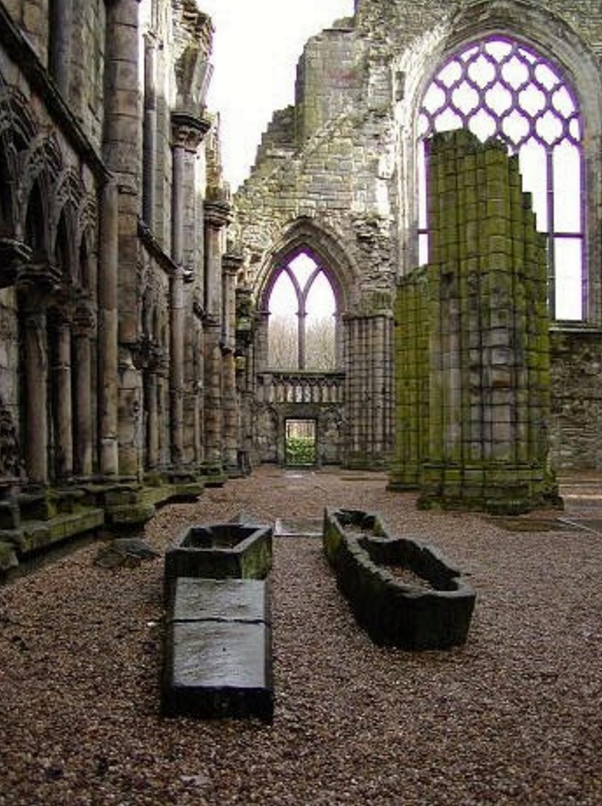 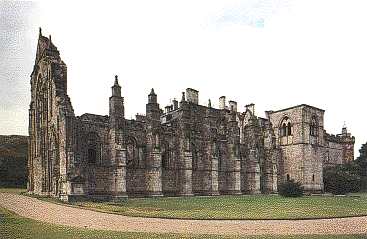 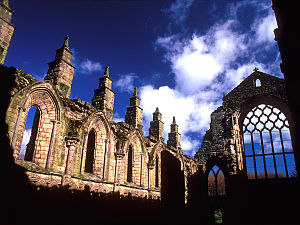 Legend relates that in 1127, while King David I was hunting in the forests to the east of Edinburgh during the Feast of the Cross, he was thrown from his horse after it had been startled by a hart. According to variations of the story, the king was saved from being gored by the charging animal when it was startled either by the miraculous appearance of a holy cross descending from the skies, or by sunlight reflected from a crucifix which suddenly appeared between the hart’s antlers while the king attempted to grasp them in self-defence. As an act of thanksgiving for his escape, David I founded Holyrood Abbey on the site in 1128. 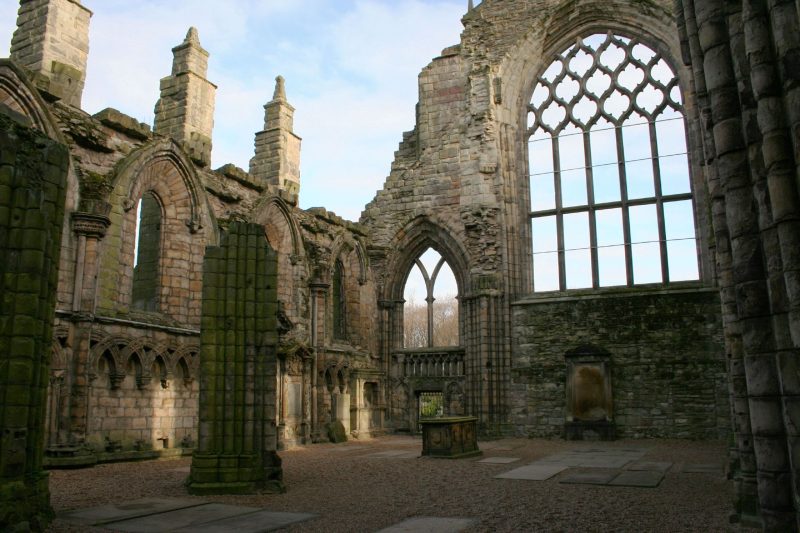 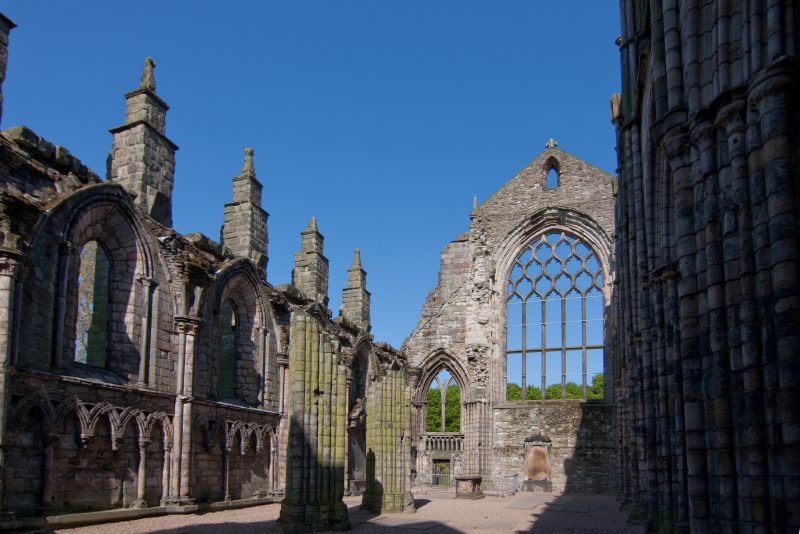 Ancient ruins of abbey which stands behind Palace of Holyrood House.

In the church was preserved, in a golden reliquary, the fragment of the True Cross brought by David’s mother, St. Margaret, from Waltham Abbey, and known thereafter as the Black Rood of Scotland (theHolyrood (cross)). At the battle of Neville’s Cross, in 1346, this precious relic fell into the hands of the English, and was placed in Durham Cathedral, whence it disappeared at the Reformation. 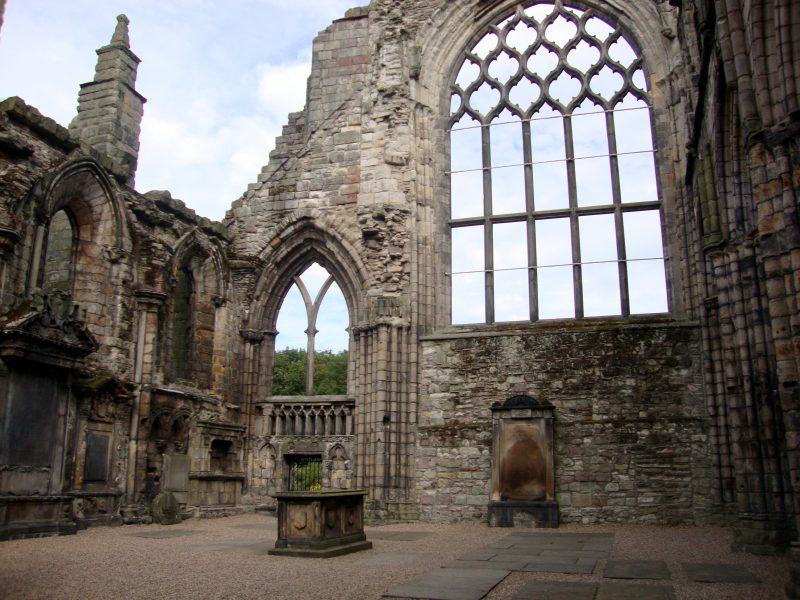 The abbey was originally served by a community of Augustinian Canons Regular from Merton Priory and the layout of the original church at Holyrood, now known only from excavations, probably came from the 1125 church at the priory. In 1177 the papal legate Vivian held council here. In 1189 the nobles and prelates of Scotland met here to discuss raising a ransom for William the Lion.

The original abbey church of Holyrood was largely reconstructed between 1195 and 1230.The completed building consisted of a six-bay aisled choir, three-bay transepts with a central tower above, and an eight-bay aisled nave with twin towers at its west front.

Among the chief benefactors of Holyrood during the four centuries of its existence as a religious house were Kings David I and II; Robert, Bishop of St. Andrews; and Fergus, Lord of Galloway. 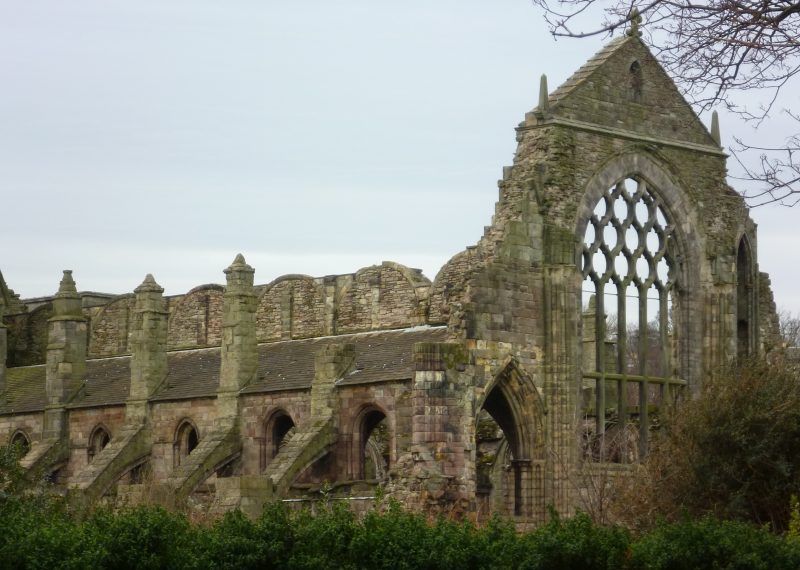 The Parliament of Scotland met at the abbey in 1256, 1285, 1327, 1366, 1384, 1389 and 1410. In 1326 Robert the Bruce held parliament here and there is evidence that Holyrood was being used as a royal residence by 1329.The Treaty of Edinburgh–Northampton (1328), which brought an end to the First War of Scottish Independence, was signed by Robert I in the “King’s Chamber” at Holyrood in March 1328. The abbey’s position close to Edinburgh Castle meant that it was often visited by Scotland’s kings, who were lodged in the guest house situated to the west of the abbey cloister. In the mid-15th century, with the emergence of Edinburgh as the main seat of the royal court and the chief city in the kingdom, the Kings of Scots increasingly used the accommodation at Holyrood for secular purposes. James II and his twin brother Alexander, Duke of Rothesay, were born there in October 1430. James was also crowned at Holyrood in 1437 and building works were carried out before his marriage there in 1449. Between 1498 and 1501, James IV constructed a royal palace at Holyrood, adjacent to the abbey cloister. Royal influence over the abbey further increased when in 1538 Robert Stewart, the infant, illegitimate son of James V, was appointed as commendator of Holyrood. 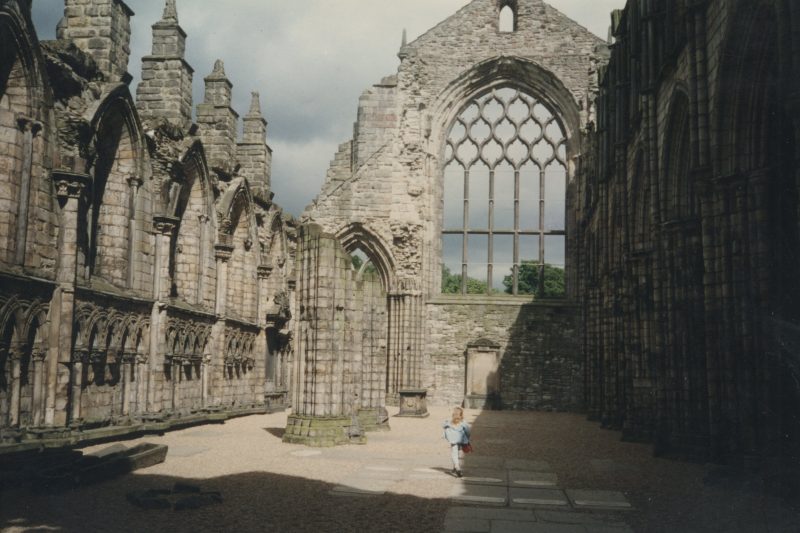 During the War of the Rough Wooing, the invading English armies of the Earl of Hertford inflicted structural damage on Holyrood Abbey in 1544 and 1547. Lead was stripped from the roof, the bells were removed, and the contents of the abbey were plundered. In 1559, during the Scottish Reformation, the abbey suffered further damage when a mob destroyed the altars and looted the rest of the church.With the reformation and the end of monastic services, the east end of the abbey church became redundant. In 1569, Adam Bothwell, the commendator of Holyrood, informed the General Assembly of the Church of Scotland that the east end was in such a state of disrepair that the choir and transept should be demolished. This was done the following year, retaining only the nave, which by then was serving as the parish church of the burgh of Canongate. Between 1570 and 1573 an east gable was erected, closing the east end of the former nave, all but two of the windows in the nave were blocked up, the royal tombs were removed to a new royal burial vault in the south aisle and the old east end was demolished.The abbey was extensively remodelled in 1633 for the coronation of Charles I. 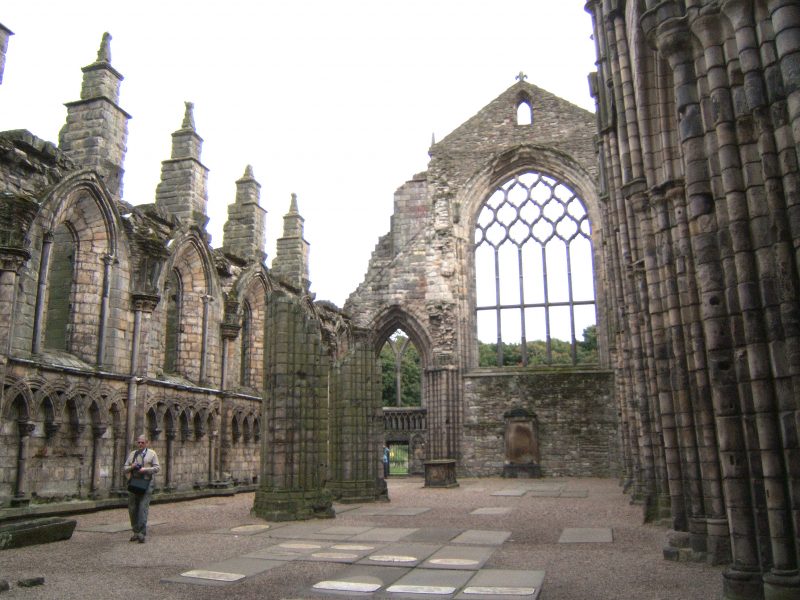 In 1686, James VII established a Jesuit college within Holyrood Palace. The following year, the Protestant congregation was moved to the new Kirk of the Canongate, and the abbey was converted into a Roman Catholic Chapel Royal and the chapel of the Order of the Thistle.The abbey church was remodelled according to the plans of James Smith, and was fitted with elaborate thrones and stalls for the individual Knights of the Thistle, carved byGrinling Gibbons. However, in 1688, following the Glorious Revolution, the Edinburgh mob broke into the abbey, destroyed the Chapel Royal and desecrated the royal tombs. The roof was vaulted in stone in 1758, but the work was badly executed, and during a storm in 1768 the roof collapsed, leaving the abbey as it currently stands, a roofless ruin. The restoration of the abbey has been proposed several times since the 18th century – in 1835 by the architect James Gillespie Graham as a meeting place for the General Assembly of the Church of Scotland and, in 1906, as a chapel for the Knights of the Thistle – but both proposals were rejected