SS Thistlegorm- nestled at the bottom of the Red Sea, the beautiful wreck was discovered twice

The SS Thistlegorm was a British armed Merchant Navy ship built in 1940 by Joseph Thompson & Son in Sunderland, England.The SS Thistlegorm was built by Joseph Thompson & Sons shipyard in Sunderland for the Albyn Line and launched in April 1940. She was powered by a triple-expansion steam engine rated to 365 hp (272 kW)The vessel was privately owned but had been partly financed by the British government and was classified as an armed freighter. She was armed with a 4.7-inch (120 mm) anti-aircraft gun and a heavy-calibre machine gun attached after construction to the stern of the ship. She was one of a number of “Thistle” ships owned and operated by the Albyn Line, which was founded in 1901, based in Sunderland, and had four vessels at the outbreak of World War II.

The vessel carried out three successful voyages after her launch. The first was to the US to collect steel rails and aircraft parts, the second to Argentina for grain, and the third to the West Indies for rum. Prior to her fourth and final voyage, she had undergone repairs in Glasgow. 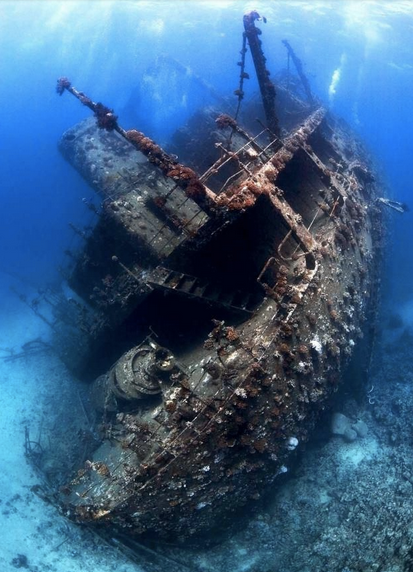 The crew of the ship, under Captain William Ellis, were supplemented by 9 naval personnel to man the machine gun and the anti-aircraft gun.via 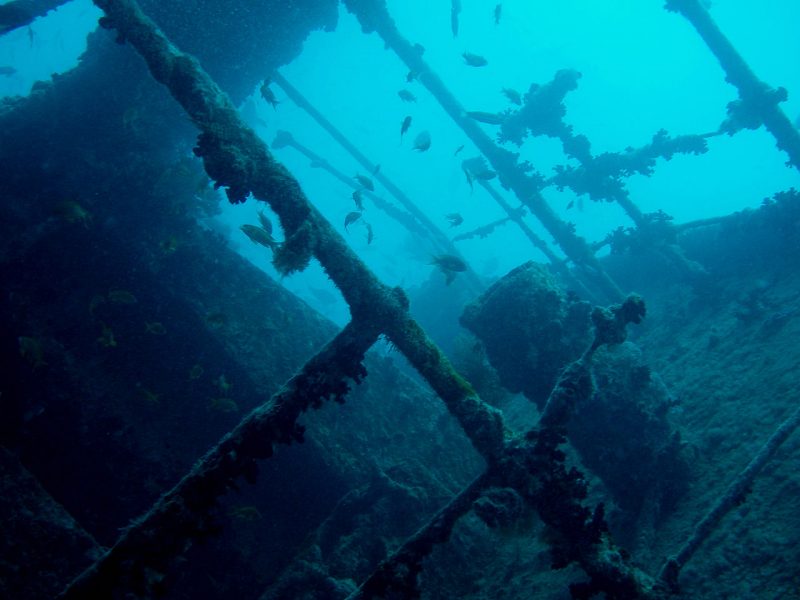 She set sail on her fourth and final voyage from Glasgow on 2 June 1941, destined for Alexandria, Egypt.Wikipedia

The vessel’s cargo included: Bedford trucks, Universal Carrier armoured vehicles,Norton 16H and BSA motorcycles, Bren guns, cases of ammunition, and 0.303 rifles as well as radio equipment, Wellington boots, aircraft parts, railway wagons  and two LMS Stanier Class 8F steam locomotives.These steam locomotives and their associated coal and water tenders were carried as deck cargo and were for the Egyptian Railways. The rest of the cargo was for the Allied forces in Egypt. At the time the Thistlegorm sailed from Glasgow in June, this was the Western Desert Force, which in September 1941 became part of the newly formed Eighth Army. The crew of the ship, under Captain William Ellis, were supplemented by 9 naval personnel to man the machine gun and the anti-aircraft gun.

Due to German and Italian naval and air force activity in the Mediterranean, the Thistlegorm sailed as part of a convoy via Cape Town, South Africa, where she refuelled, before heading north up the East coast of Africa and into the Red Sea. On leaving Cape Town, the light cruiser HMS Carlisle joined the convoy. Due to a collision in the Suez Canal, the convoy could not transit through the canal to reach the port of Alexandria and instead moored at Safe Anchorage F, in September 1941 where she remained at anchor until her sinking on 6 October 1941. HMS Carlisle moored in the same anchorage. 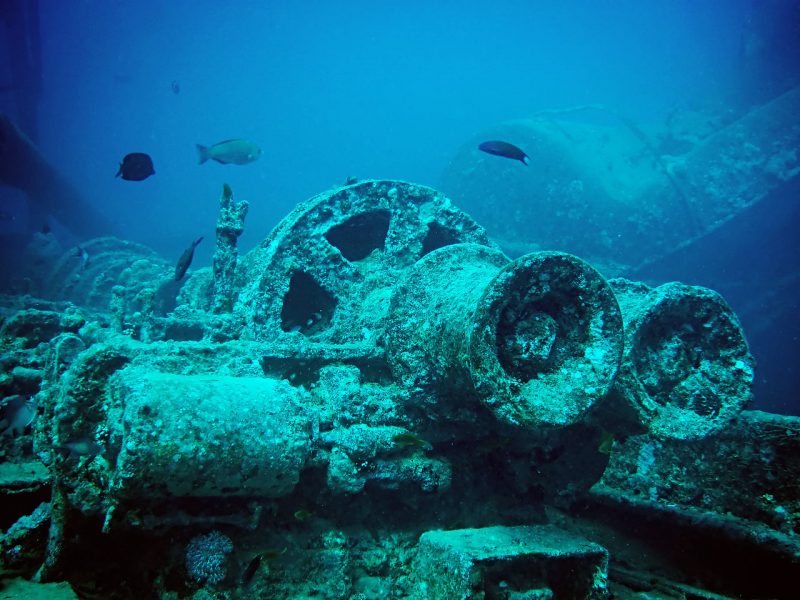 There was a large build-up of Allied troops in Egypt during September 1941 and German intelligence (Abwehr) suspected that there was a troop carrier in the area bringing in additional troops.Wikipedia

.Two Heinkel He 111 aircraft of II Staffeln, Kampfgeschwader 26, Luftwaffe, were dispatched from Crete to find and destroy the troop carrier. This search failed but one of the bombers discovered the vessels moored in Safe Anchorage F. Targeting the largest ship, they dropped two bombs on the Thistlegorm, both of which struck hold 4 near the stern of the ship at 0130 on 6 October. The bomb and the explosion of some of the ammunition stored in hold 4 led to the sinking of the Thistlegorm with the loss of four sailors and five members of the Royal Navy gun crew. The survivors were picked up by HMS Carlisle. Captain Ellis was awarded the OBE for his actions following the explosion and a crewman, Angus McLeay, was awarded the George Medal and the Lloyd’s War Medal for Bravery at Sea for saving another crew member. Most of the cargo remained within the ship, the major exception being the steam locomotives from the deck cargo which were blown off to either side of the wreck. 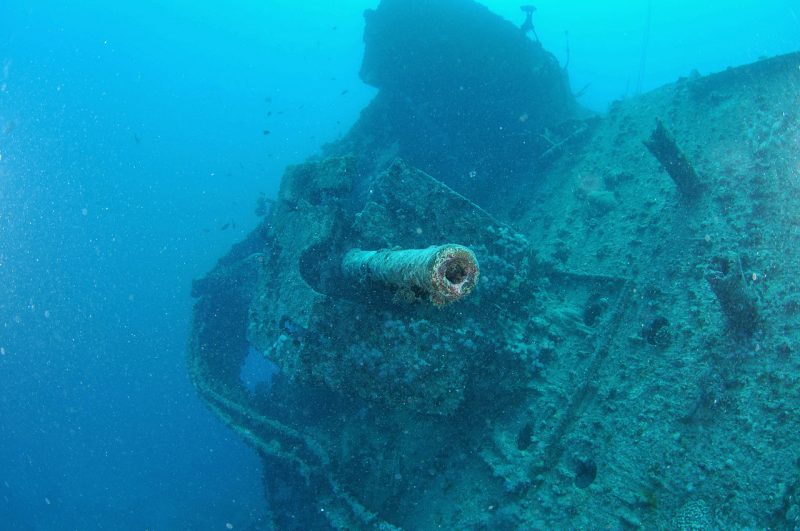 Anti-aircraft gun on the stern of the Thistlegorm.Wikipedia

In the early fifties, Jacques-Yves Cousteau discovered her by using information from local fishermen. He raised several items from the wreck, including a motorcycle, the captain’s safe, and the ship’s bell. The February 1956 edition of National Geographic clearly shows the ship’s bell in place and Cousteau’s divers in the ship’s Lantern Room. Cousteau documented diving on the wreck in part of his book The Living Sea. 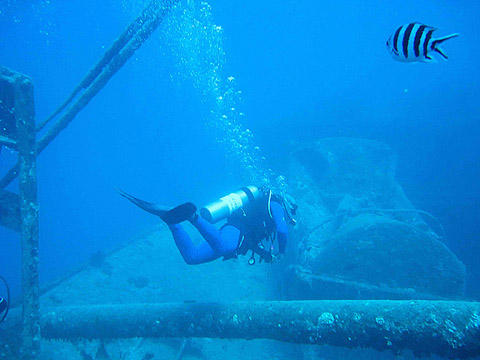 Following Cousteau’s visit, the site was forgotten about except by local fishermen. In the early 1990s, Sharm el-Sheikh began to develop as a diving resort. Recreational diving on the Thistlegorm restarted following the visit of the dive boat Poolster, using information from another Israeli fishing boat captain.

The massive explosion that sank her had blown much of her midships superstructure away and makes the wreck very accessible to divers. The depth of around 30 m (100 feet) at its deepest is ideal for diving without the need for specialist equipment and training. 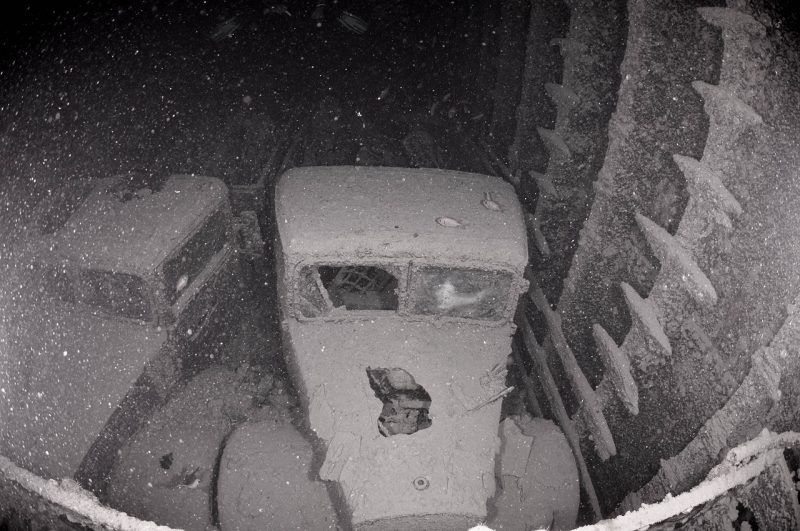 Trucks, part of the cargo of the Thistlegorm.Wikipedia

The wreck attracts many divers for the amount of the cargo that can be seen and explored. Boots and motorcycles are visible in Hold No. 1. Trucks, motorcycles, Wellington boots, rifles, Westland Lysander wings, about twenty Bristol Mercury radial engine exhaust rings and a handful of cylinders and Bristol Blenheim bomber tail planes  are visible in Hold No. 2. Universal Carrier armoured vehicles, RAF trolley accumulators, and two Pundit Lights can also be found. Off to the port side of the wreck level with the blast area can be found one of the steam locomotives which had been stored as deck cargo and the other locomotive is off the starboard side level with Hold No. 2.

The wreck is rapidly disintegrating due to natural rusting. The dive boats that rely on the wreck for their livelihood are also tearing the wreck apart by mooring the boats to weak parts of the wreck, leading to parts of the wreck collapsing. For this reason, in December 2007 the Hurghada Environmental Protection and Conservation Association (HEPCA) a non-governmental organisation installed thirty-two permanent mooring buoys and drilled holes in the wreck to allow trapped air to escape.During this work, the vessel was closed off to recreational diving. However, as of 2009, none of these moorings remain as the blocks themselves were too light (resulting in ships dragging them), and the lines connecting the moorings to the wreck were too long (meaning with the strong currents in the area, people would find it impossible to transfer from the mooring to the actual wreck). As a result, all boats now moor off directly to the wreck again.

« Rotting in obscurity, workers spitroasting pigs on its deck – the sad state of the Queens iconic QE2
The terrible tale of ‘HMS Cannibal’ shipwrecked, murder & crew being eaten by shipmates »