Abandoned Dubai: Artist recreates the city after the humans have left

What would happen if zoo animals escaped from their cages? What would happen to abandoned cities over time? A British photographer named Richard Allenby-Pratt has created images depicting a fictionally eerie, abandoned Indian city of Dubai, pairing those with wildlife images.

Due to the debts of the city, the place is nearly abandoned. The skyscrapers and resorts stand vacant and the grass on the golf course appears to be radiant green in the desert city. Without sponsors in the city, two million people were left out of work, resulting in their fully abandoning what was once an extremely wealthy city. Even the newest buildings that were in the process of being finished have been left abandoned. What Allenby-Pratt was hoping to accomplish with his photographs was depicting the thin line that animals and humans walk on and cross once in a while. Humans took over so much land, stealing it from the wildlife. Now it is time for the wildlife to take back the land. 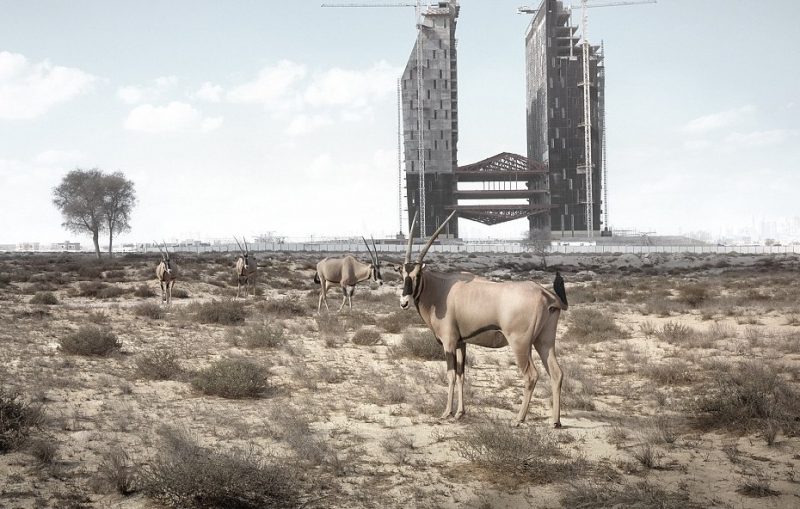 It would not take long for animals to take over the city. If a person was to travel there, they’d most likely see dogs and gazelles for the most part. However, there have been larger animals to appear within the city limits.

One photo captured a lion on top of a platform in an empty apartment, taking in the scenery. Another is a zebra walking through the desert highway. Kangaroos hop passed skyscrapers, a puma is living in a resort, and a hyena lives inside a house. A rhino sits near a building site, a crocodile lives in the harbor, and a giraffe walks passed one of the tallest skyscrapers in the city. 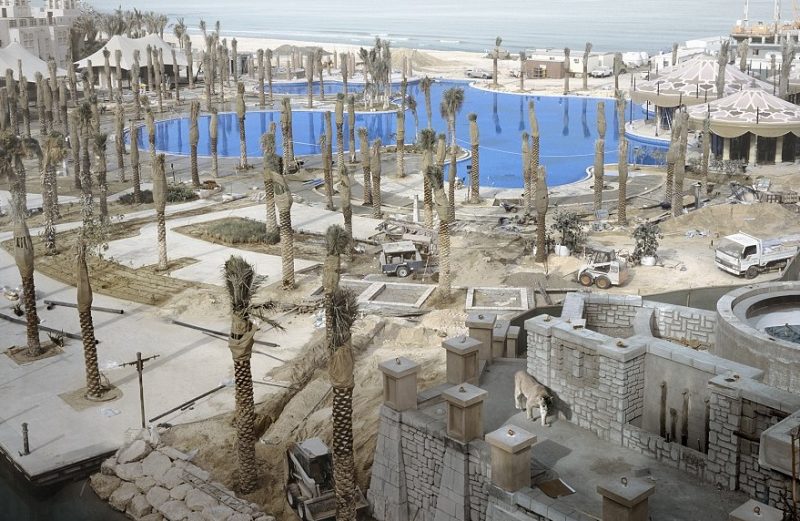 Another exotic animal makes itself at home a vacant former holiday resort. source

Although it seems completely unrealistic, it is true that such a wide variety of animals lived in the city. Wealthy people living in the city kept animals in their homes; exotic animals symbolized their owners’ social status. Other animals that now roam the city came from the abandoned zoo.

Allenby-Pratt explained that although the photos are recreated, the city really is close to despair. It would only take a few months for animals to take over the area once the city finally collapses. He explained that that is how vulnerable the city and its people actually are. He wanted to capture the time as if the city was left by a majority of its citizens. 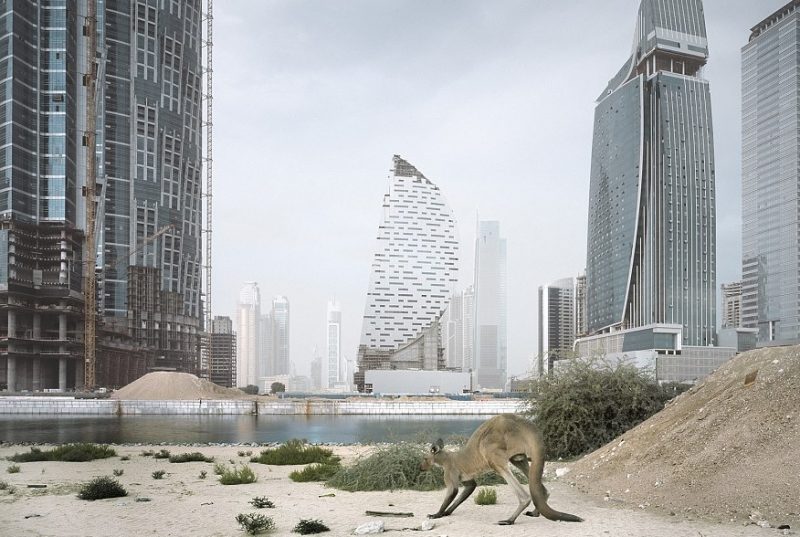 A kangaroo hops along a canalside. But – as strange as it may seem – such exotic animals are kept by many wealthy residents are pets. source

Another thing the photographer wants people to see in his work is just how vulnerable Dubai’s economy is. He said that because of its reliance on an ex-pat labor force, the city has little national identity. He explained that nearly 90% of the population there cannot call the place home, which might eventually cause a major collapse in the basic infrastructure.

He added animals to the photos for an extra effect, hinting that the zoo animals would have eventually been let out or have escaped.   He also wants to point out the fact that our ecosystem is fragile and we should accept the other humans and living things in our world. 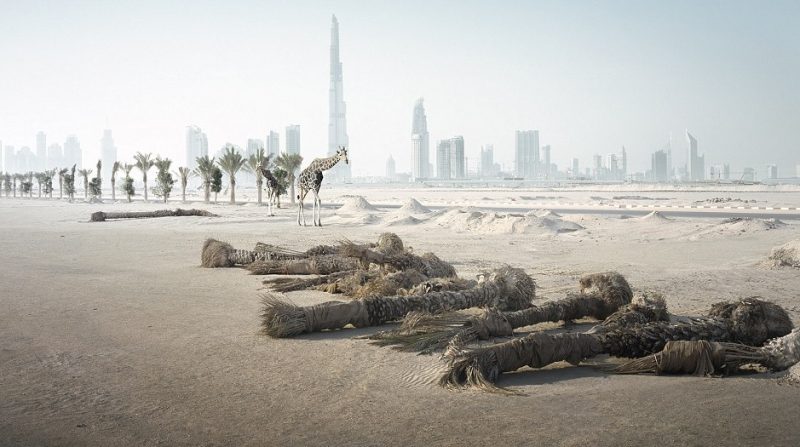 Giraffe in the desert with Dubai’s skyline visible in the background. source

One photo shows a calm lake with buildings surrounding it. If a person looks closely, they will see a lone alligator sitting under the water near the shore. It is as if it actually belongs there and such things are an everyday occurrence. What is especially interesting about the photos is that there is generally only one type of animal in each photo, suggesting that there is only one species of each left in the city. This could be significant, showing that as soon as any animal either leaves the city or dies, the effect is just like that of the human exodus – completely gone.

Allenby-Pratt also wants people to see just how much humans have taken over wildlife and their homeland. It is almost a reversed idea. If humans keep expanding, they will destroy animals’ homes, resulting in eventual extinction. These photos show that the animals survive, whereas humans go elsewhere. It really puts a different perspective on the world.