In the English dictionary, the word “enterprise” is defined as “a project or undertaking, typically one that is difficult or requires effort.” This noun has been the name of many ships throughout history. It was also the name used for one of the now retired space shuttles, and it also became part of popular culture, with the help of the Star Trek Series. When you look at the events in which some of these vessels took part, their name certainly justifies the definition. Since the first ship bearing this name and proudly serving in the new United States navy, these ships have been a symbol of prestige. Since the American Revolutionary War, the “Enterprises” have been undertaking many important and difficult missions, protecting people in naval battles, moving the boundaries of traveling into space, and, ultimately, defending humanity on an intergalactic level in a fictional universe. Here are some of those remarkable and iconic ships of the United States navy, together with the space shuttle and the fictional ones from Star Trek. Who knows, maybe one day this tradition will continue with real life space vessels that will take us into deep space. 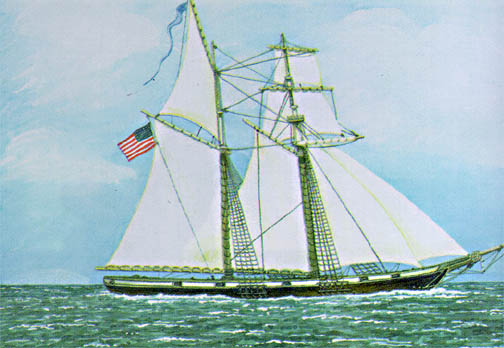 The USS Enterprise was a Continental Navy sloop-of-war that served in Lake Champlain during the American Revolutionary War. This is the first is the first of a long and prestigious line of United States Navy ships to bear the name Enterprise. This Enterprise originally belonged to the Brittish Royal Navy and it was classified as a “sloop-of-war”. The original name of this ship was George. George was built at St. Johns (now Saint-Jean-sur-Richelieu) in Quebec, Canada under this name. But its destiny will soon change. In May 1775, a small American force under Colonel Benedict Arnold sailed up the Richelieu River. At 07:00 on 18 May, Arnold and 35 raiders captured the fort and shipyards at St. Johns, along with the newly launched George, with no loss of life. Two hours later Arnold’s raiders left on board the newly captured sloop, which was later armed with 12 guns and renamed Enterprise.

For awhile, Enterprise was the most significant warship in Lake Champlain. The ship was charged with maintaining American control of the lake in the early days of the war. Enterprise also acted as flagship for Colonel Arnold.

The story of the first Enterprise ended only two years after it was built. She was one of five vessels assigned to convoy duty in Bateaux in the evacuation of Ticonderoga. The small American force was no match for the British fleet on Lake Champlain, and after two ships had been captured, Enterprise and the other two were run aground on 7 July 1777 and burned down in order to prevent their capture. 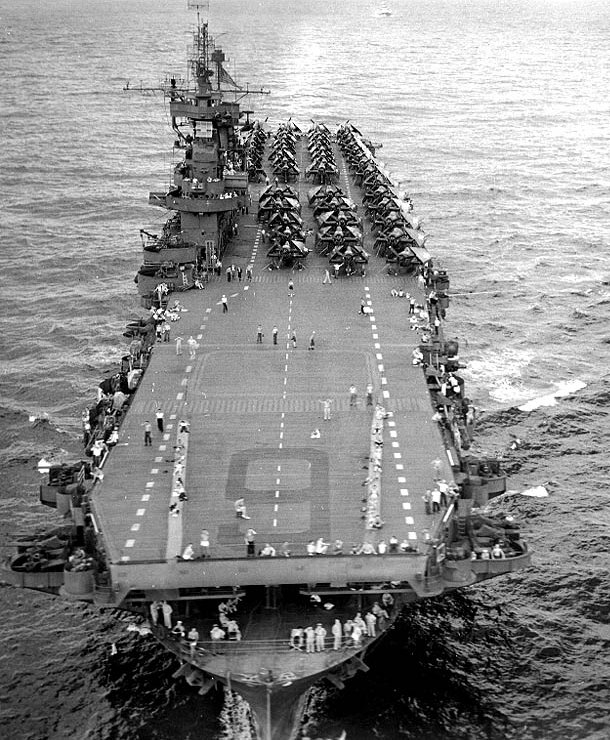 This was the seventh ship named Enterprise and the first one to receive the nickname Big “E”. It had many nicknames including the Lucky “E”, the “Grey Ghost” and the “Galloping Ghost”. The Big “E” was launched in 1936 and was one of only three American carriers commissioned prior to World War II to survive the war (the other two are Saratoga and Ranger). She participated in more major actions of the war against Japan than any other US ship. It is interesting that on three separate occasions during the Pacific War, the Japanese announced that CV-6 had been sunk in battle, earning her the name “The Grey Ghost”. Enterprise earned 20 battle stars, the most for any U.S. warship in World War II and became the most decorated US ship of World War II.

Enterprise was at sea on the morning of 7 December 1941 and received a radio message from Pearl Harbor, reporting that the base was under attack. That evening, Enterprise, screened by six of her Grumman F4F Wildcat fighters, put into Pearl Harbor for fuel and supplies. The aircraft were fired on by anti-aircraft defenses, and one pilot radioed in, reporting that his aircraft was an American aircraft. She sailed early the next morning to patrol against possible additional attacks in the Hawaiian Islands. Although the group encountered no surface ships, Enterprise aircraft sank Japanese submarine I-70 on 10 December 1941.

The CV-6 was deemed surplus for the post-war needs of America’s navy. She entered the New York Naval Shipyard on 18 January 1946 for deactivation and was decommissioned on 17 February 1947. Surviving Enterprise artifacts include the ship’s bell, which resides at the U.S. Naval Academy. and the sixteen-foot, one-ton nameplate from the ship’s stern in River Vale, New Jersey. 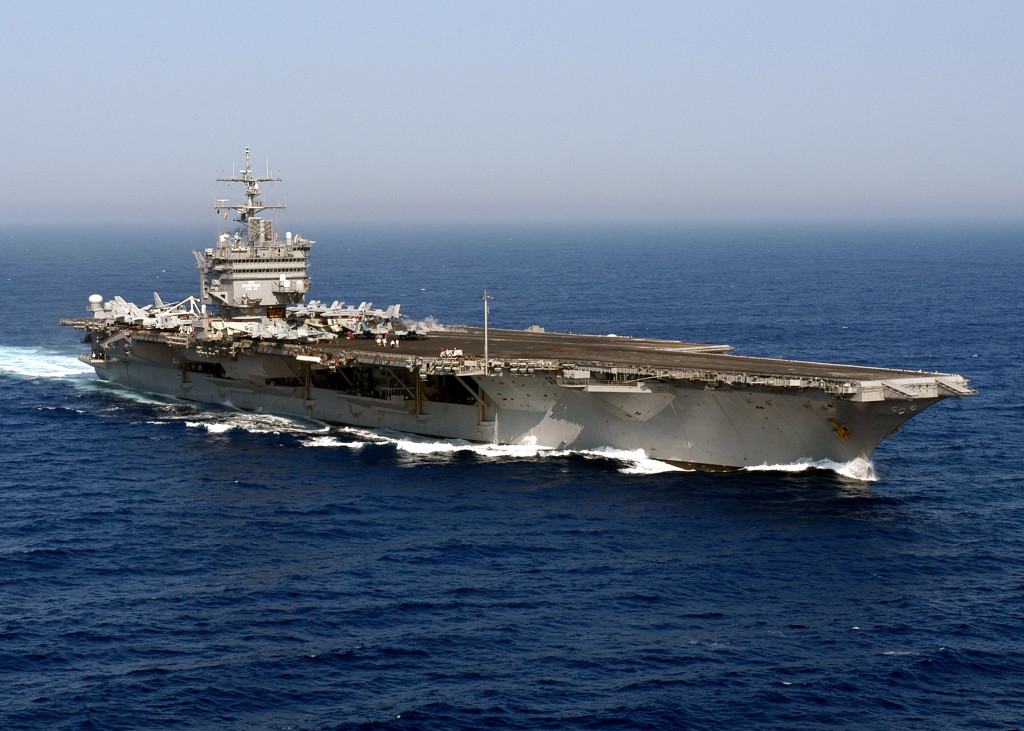 She was the world’s first nuclear-powered aircraft carrier and the eighth United States naval vessel to bear the name Enterprise. Like her predecessor of World War II (The seventh Enterprise), she is nicknamed “Big E”. The CVN-65 is 1,123 ft (342 m) and although inactive, she still holds the length record among naval vessels. She is also the 12-th heaviest supercarrier (94,781 tonnes). This huge ship had a crew of 4,600 service members.

Among many other missions, on 20 February 1962, the Enterprise was used as a tracking and measuring station for the flight of Friendship 7, the Project Mercury space capsule in which Lieutenant Colonel John H. Glenn, Jr. made the first American orbital spaceflight. This event tightly connects the Enterprise with the early efforts for conquering space.

As of 2016, Enterprise is still a commissioned United States Navy ship but is inactive. She has undergone enough of the four-year-long inactivation process to render her unfit for further military service. Inactivation removes fuel, fluids, furnishings, tools, fittings and de-energizes the ship’s electrical system. Enterprise has already been cut open to allow the removal of usable systems. 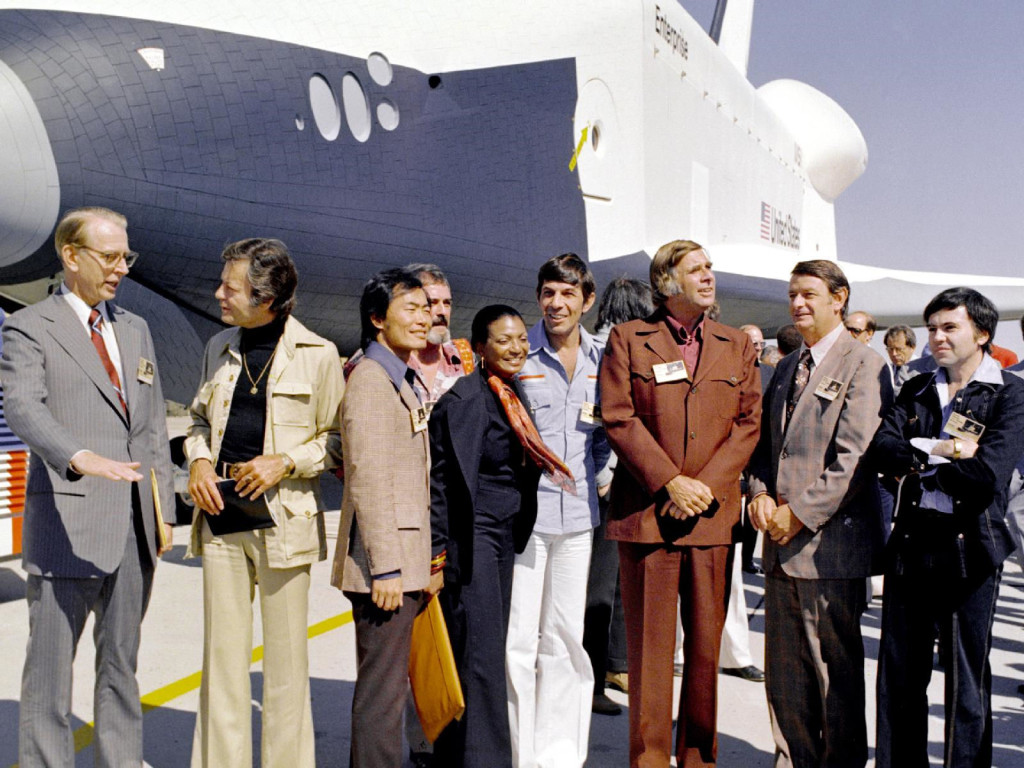 This is the transition point. The enterprise slowly moved from water into the air. The Space Shuttle Enterprise was the first orbiter of the Space Shuttle system.  Rolled out on September 17, 1976, it was built for NASA as part of the Space Shuttle program to perform atmospheric test flights after being launched from a modified Boeing 747. It was constructed without engines or a functional heat shield and was therefore not capable of spaceflight. It was only a prototype.

Originally, Enterprise had been intended to be refitted for orbital flight to become the second space-rated orbiter in service. However, during the construction of Space Shuttle Columbia, details of the final design changed, making it simpler and less costly to build Challenger around a body frame that had been built as a test article. Similarly, Enterprise was considered for refit to replace Challenger after the latter was destroyed, but Endeavour was built from structural spares instead.

This shuttle was named Enterprise (OV-101) following a write-in campaign organized by fans of the, already popular, original Star Trek series (from 1969). When the shuttle rolled out of the manufacturing facilities, it was even greeted by the iconic cast of the show.  An interesting mix of science and fiction.

The VSS Enterprise was the first SpaceShipTwo (SS2), built by Scaled Composites for Virgin Galactic. As of 2004, it was planned to be the first of five commercial suborbital SS2 spacecraft planned by Virgin Galactic.

rolling out of production on 7 December 2009, the vessel made its first powered flight in April 2013. It broke the sound barrier achieving a speed of Mach 1.43, and climbed to 69.000 feet (21 km) over the Mojave Desert under rocket power and then descended.

The VSS Enterprise’s name was an acknowledgment of the USS Enterprise from the Star Trek television series.

Unfortunately, the VSS Enterprise was destroyed during a powered test flight on 31 October 2014, killing one pilot and seriously injuring another. This amazing spaceship will always have a significant place in history as one of the earliest commercial spaceflight efforts. 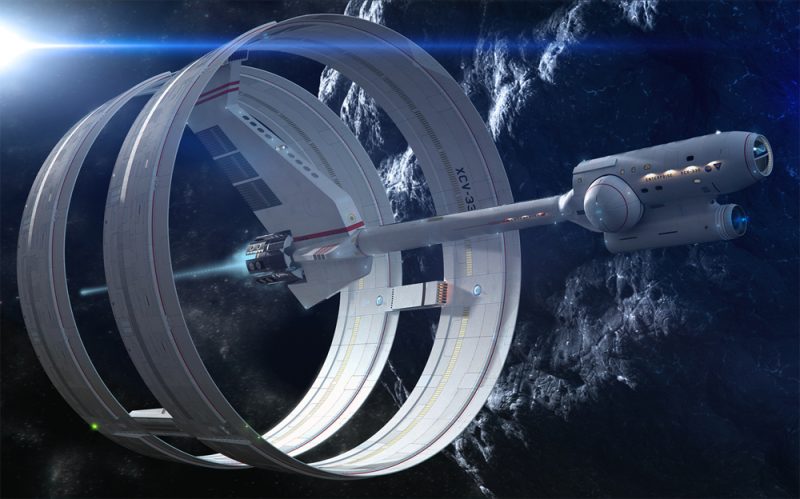 And now we enter into the realm of fictional spacefaring vessels from the Star Trek universe. This is the USS Enterprise (XCV-330), previously the UESP Enterprise (7) and also the SS Enterprise. It is the first spacecraft named Enterprise to be designated a starship. According to Star Trek lore, The UESP Enterprise was originally built as a Starliner, a manned interstellar probe, by the United Earth Space Probe Agency in the mid-to-late 21st century, as one of Earth’s earliest attempts at interstellar travel. It was the only one of its class to reach its destination of Alpha Centauri.

This vessel only appeared as an illustration in a scene of “Star Trek: The Motion Picture” (1979), and once again, as a painting in one of the “Star Trek: Enterprise” episodes (2001) 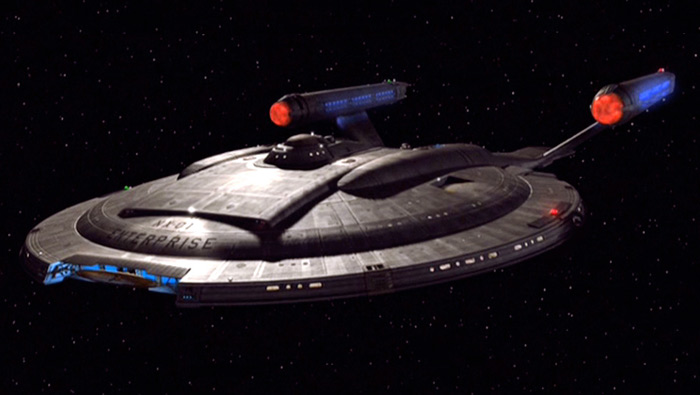 It had the in-universe registration of NX-01 and appeared earlier in the franchise timeline than any Starfleet ship named Enterprise. The NX-01 was commanded by Captain Jonathan Archer and it was the centerpiece of the Star Trek: Enterprise TV show (2001–2005).

The interior of the vessel was designed by Zimmerman, who visited United States Navy fast-attack submarines for inspiration. He also kept in mind the heritage of the other ships named Enterprise in the history of Star Trek. In many of the episodes, you can see illustrations of some of the previously mentioned vessels that bear the same name. The illustrations were hanged in the captain’s room. 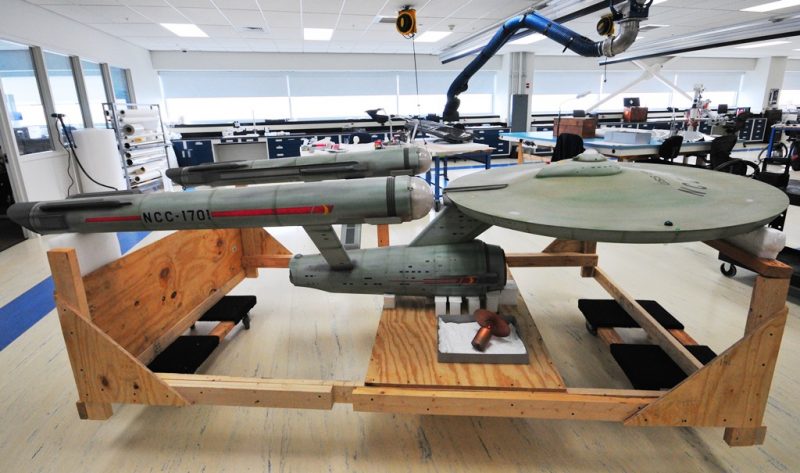 “to explore strange new worlds; to seek out new life and new civilizations; to boldly go where no man has gone before”.

These are the words of captain James T. Kirk (William Shatner), from the voice-over at the beginning of every Original Star Trek episode (1966-1969). They accurately explain the mission of the fictional Enterprise [NCC-1701], the vessel that formed the basis for one of sci-fi’s most iconic images.

The NCC-1701 is the central starship for the whole fictional Star Trek universe, depicted in 6 network television series, 12 feature films, and countless books and fan-created media.  The ship’s design “formed the basis for one of sci-fi’s most iconic images”

This starship and its design, made (and still makes) a huge cultural impact in many different aspects. It influenced many people and it inspired many new and important inventions.

The extent of the influence it had can be recognized in this example. Because of the efficiency of its style and layout, the Enterprise‘s bridge design was once considered for use by the United States Navy. More precisely, the layout of task stations caused the Navy to rethink the division of labor for managing rapidly changing information: helmsman focuses on immediate steering requirements, navigator plans helmsman’s next actions, captain plans strategy while looking over the shoulders of both. Without visual distraction, the captain is told from behind about engine status, weapons status, and fleet communications. 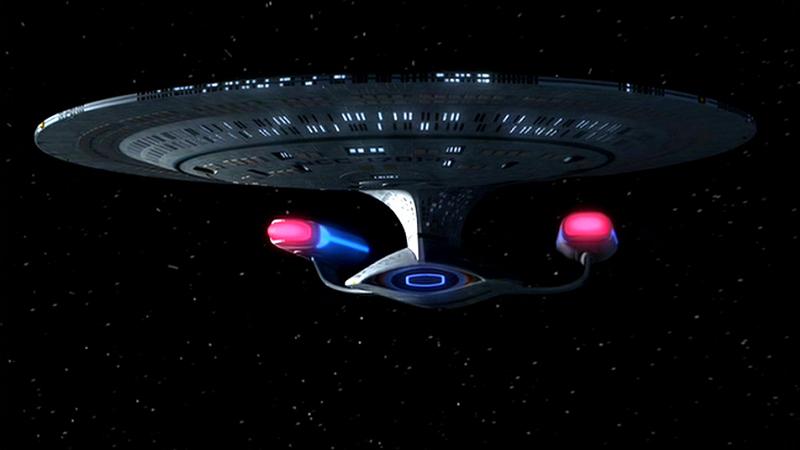 The USS Enterprise (NCC-1701-D), or shortly Enterprise-D, is a 24th-century starship in the Star Trek fictional universe and the focus point of the Star Trek: The Next Generation television series (1987–1994).

This is yet another fictional ship from the Star Trek universe that influenced many young people. 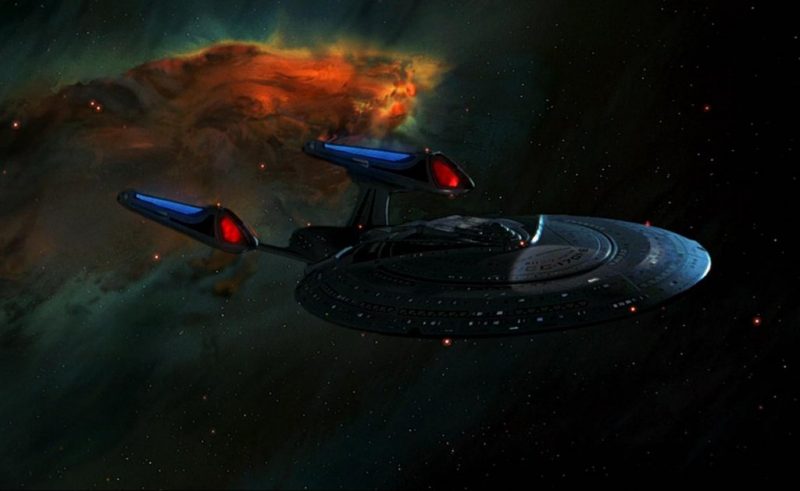 The USS Enterprise (NCC-1701-E), sometimes referred to as the Enterprise-E was a Federation Sovereign-class heavy explorer starship in service to Starfleet (in the fictional world of Star Trek). The ship was designed to fight the infamous Borg collective. This Enterprise vessel in the movies “Star Trek: First Contact” (1996), “Star Trek: Insurrection” (1998), and “Star Trek Nemesis” (2002). The sixth Federation starship, and seventh Starfleet vessel, to bear the prestigious name. From 2373 to 2385, Captain Jean-Luc Picard was assigned as the Enterprise’s commanding officer.