When people think of the 1920s, they generally think of the words “gangsters,” “mob,” and “crime”. Some of the most famous American gangsters and infamous criminals include Bonnie and Clyde and Al Capone, for example. Yet Sydney, Australia had some of its very own infamous people.

One of those criminals was Sid Kelly, who was known for making a fortune in illegal gambling houses. He was found dead in his mansion at 48 years old.

Philip Henry Ross was a cocaine addict who actually posed as a doctor to trick chemists he visited into giving him the drug. For the longest time, his criminal record was clean. But he finally gave in to the police and told them he couldn’t live without cocaine and there was no use lying about it anymore. S

ydney Skukarman was known for defrauding department stores with fake checks. William Munro was a thief, and Walter Smith was a known burglar. 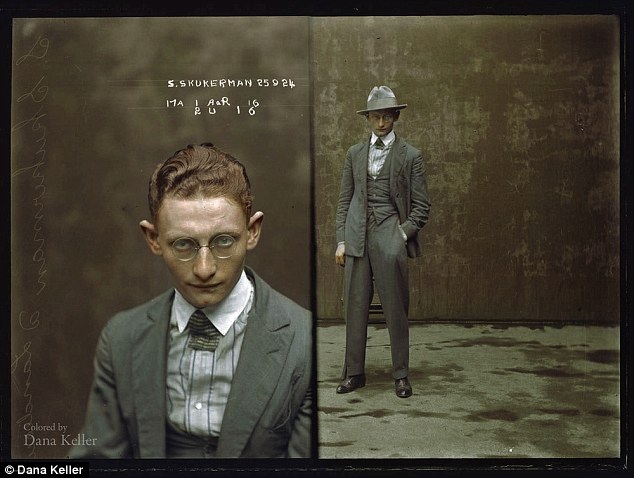 Jewish immigrant Sydney Skukerman, or Skukarman, was a 35-year-old conman posing as a commercial traveller who wrote fake cheques to department stores like David Jones and Anthony Hordern and Sons and other merchants to obtain money and clothing. Arrested and photographed at Central police station on September 25, 1924, he was sentenced to 18 months hard labour

What do all of these men have in common besides a life of crime? When they were captured or caught in the act, Sydney’s Central Police Station took each of them in to get their mug shots taken. Mug shots were a popular thing during the 1920s.

There are nearly 2,500 photographs taken by the police department from the years 1910 to 1930 that are now property of the Historic Houses Trust. 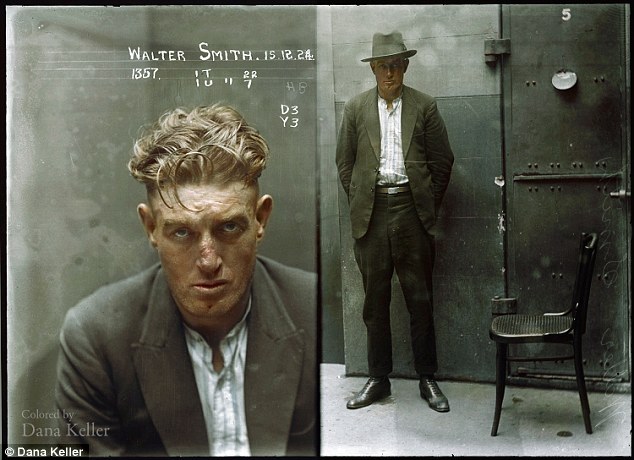 Burglar Walter Smith, photographed in a cell at Central Police Station on December 15, 1924 after he was charged with breaking and entering the dwelling-house of Edward Mulligan and stealing blinds at value 20 pounds (part recovered), and with stealing clothing, value 26 pounds (recovered) in the dwelling house of Ernest Leslie Mortimer. Smith was sentenced to six months hard labour

The first photo Keller decided to work on was Sidney Kelly’s. The chosen picture was taken on June 25, 1924. Kelly was arrested several times in Sydney and Melbourne for the razor slashing of rival gang members.   While the Historic Houses Trusts’ description of Kelly doesn’t seem so bad, he was actually a quite disturbing character.

He was known, especially throughout the 1930s, to stand over the people he intended to rob, or those who didn’t pay him back; he had his weapon of choice out, and if people didn’t give him the money, he would slash men and women alike. 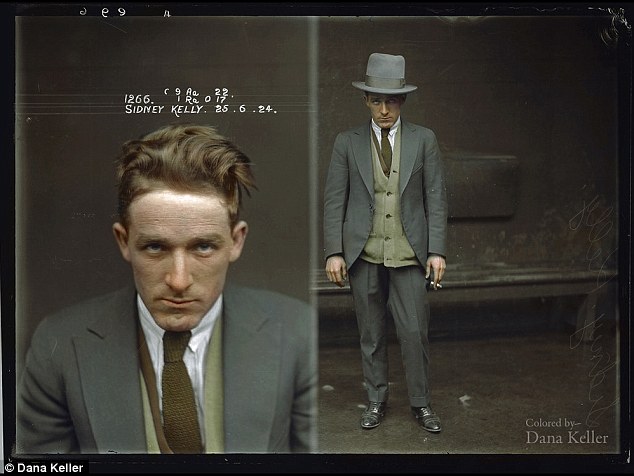 Sidney Patrick Kelly, pictured following one of his many arrests at Central Police Station on June 25, 1924, in a black and white photograph colourised by US artists Dana Keller, was a notorious Australian gangster who ran with the infamous ‘razor gangs’ in Melbourne, moving to Sydney where he became staggeringly wealthy on illegal gambling dens and was found dead at 48 in his palatial Sydney mansion

Kelly had hung around Melbourne’s worst criminals, such as the psychopath and ladies’ man Leslie ‘Squizzy’ Taylor, and gunman and thief John ‘Snowy’ Cutmore.

In 1928 Kelly attacked a prostitute named Betty Carslake by taking a razor to her face while at her house. The suburb where she lived, Darlinghurst, was dubbed “Razorhurst” due to attacks by the cocaine gangs.

Kelly ended up getting away with the Carslake attack due to the fact he had an associate, Gordon Barr, who took the fall for it. In 1929, Kelly and two other men raped a prostitute named Maisie Wilson in an abandoned house; once again he was never caught for this crime.

After he moved to Melbourne in 1930, police finally caught up Kelly. He lost a fight with a rival, John Penfold, after arguing with Kelly’s girlfriend, Poppy Kirdy.

Kelly ended up coming back with several of his own thugs and his brother to slash Penfold’s face. Kelly was given five years in prison for the crime.

Once Kelly was released from prison, he returned to Sydney and set up illegal baccarat dens. The gambling made Kelly his fortune, which he eventually used to pay off other gangsters, and even police, for protection.

After earning enough money from the gambling business, he bought a mansion. That mansion is the very one he died in alone after having suffered from a heart attack. 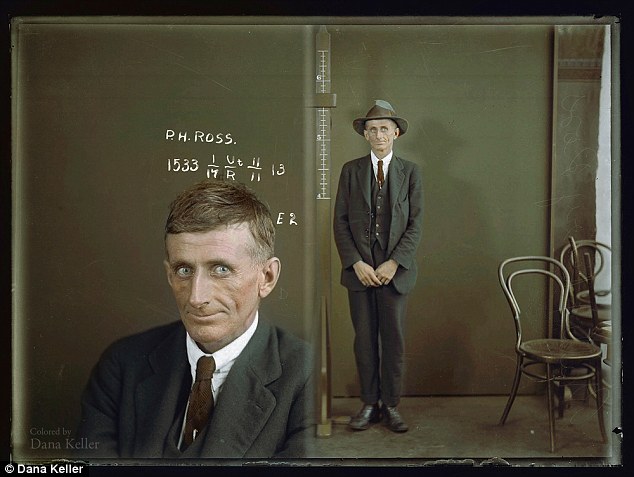 Ross was a labourer who faked at being a be a doctor, using his ‘refined features and cultured voice’ to convince chemists to give him cocaine so that he could feed his powerful addiction to the substance which he said he could not do without after becoming addicted during the first World War. He later pretended he had done a 17,000 mile walking tour of the world

On September 3, 1924, Ross stood before a judge in Adelaide. He was accused of obtaining cocaine by using several guises to trick chemists to give him the drug. He used the names like Dr. Stanley from Victoria. During that time, cocaine had been classified as a poison, which is why only doctors could prescribe it. Ross went to two chemists named Harold Victor Moore and Stuart Lidgett Shepherd.

Police arrested him two days later. Ross had changed his story; now he had been born in 1894 in Capetown. He made the story up about how he moved to Australia and how World War I played a part in his cocaine addiction.

This whole story ended up getting him off the charges. Police pitied him and he was let go without incident. After the police made the mistake of letting him go, Ross was known as an interstate criminal.

He was eventually arrested for vagrancy in Perth and false pretenses in Melbourne and Sydney. 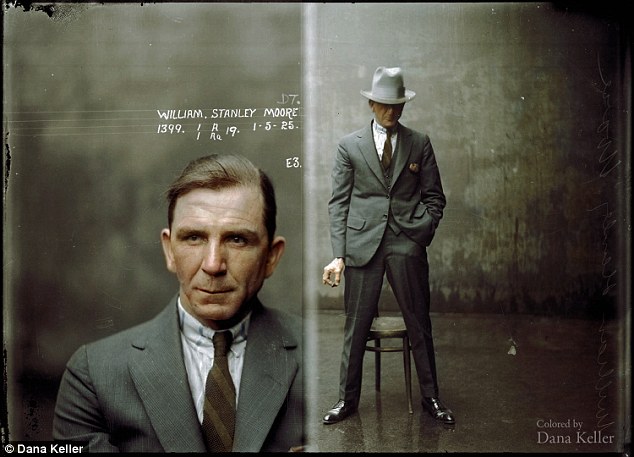 William Stanley Moore, who was 38 years old when this photo was taken, and a seasoned trafficker in opium, cocaine and morphine, for which there was a huge market in the 1920s when Sydney was infested with opium dens and some ‘white’ girls ran off to live in them after becoming addicted

In 1920, Moore was arrested and charged with the possession of opium and having in his house in Kensington stolen bottles of ‘salts of morphia.’ He was arrested several times after that, and there were raids done on four of his homes in 1925. Officials ended up finding 37 tins of opium and cocaine.

Moore and two other associates, Henry McNamara and Henry Russell, were charged with unlawfully preparing to import. He and the men were sentenced to life in prison.