“Feeling the wind in your face, and hearing the screaming tires and roaring motor, and then knowing that you’ve mastered a wildly skidding car… all are a big thrill.” – Lucky Teter

Hell Drivers – The frequently used term to describe, and the very popular title of numerous automobile thrill-based productions, performing at fairs and racetracks by various squads of stunt drivers since the 1930s. Earl “Lucky” Teter, a race driver of both autos and motorcycles, was the first to coin the phrase. He earned a wide reputation as a stunt driver with a group called ‘Lucky’ Teter’s Hell Drivers. As a former gas station attendant and a weekend test driver, Lucky decided to try his hand at the thrill driving trade during the early 1930s. In 1934, Lucky assembled a small group of individuals and put his ‘Hell Drivers’ on the road.

It was the first time the auto thrill show was conceived as a traveling attraction. 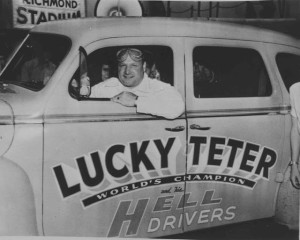 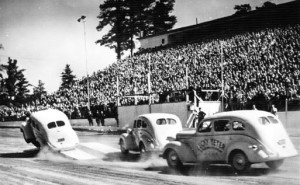 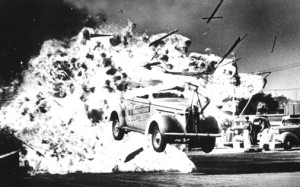 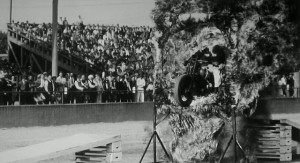 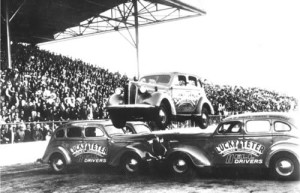 The show consisted of many of the same stunts already established by the Ward Beam thrill show, however, the ‘Hell Drivers’ developed new events. Lucky added the precision driving of new automobiles over elevated ramps, reverse spins, and added stuntmen to the show acting as ‘daredevil clowns’. By the late 1930’s, Lucky had started performing a ramp to ramp jump over a large truck or transcontinental bus. 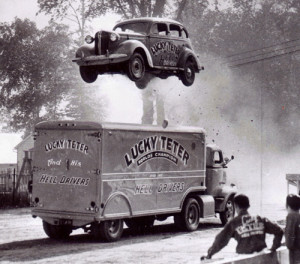 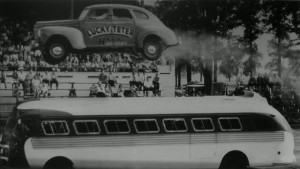 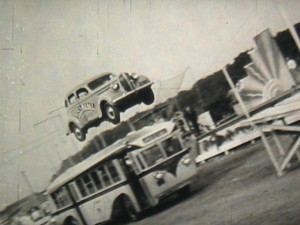 On July 4, 1942, 41-year-old Teter announced it was his last show prior to closing for the war effort. He made 3 jumps over a panel truck that day, each attempting a world record, beginning at 135 feet. His 4th and final jump was 150 feet and was dedicated “to all servicemen everywhere.” Some reported they could hear the engine missing in his bright yellow 1938 Plymouth as he accelerated onto the launching ramp while attempting to jump two Greyhound buses, his car came down short at the edge the landing ramp. The crash broke his neck and he lost his life as the jump fell short just a few feet.

The “Teters” Hell Drivers were disbanded in 1943. There is a documentary produced by filmmaker Dan T. Hall and Vizmo Films (Lucky Teter and His Hell Drivers) about the life of Lucky Teter. 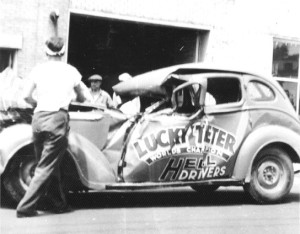 Later thrill shows coining the phrase “Hell Drivers” were launched by such famous drivers and race promoters as Jack Kochman, John Francis “Irish” Horan, Danny Fleenor, Geoff Williams and Joie Chitwood. Chitwood bought Teter’s Hell Drivers from Teter’s widow after Teter was killed in a jump in 1943. Ford Motor Company supplied cars and financed Chitwood for several years until the mid 50’s when Chitwood switched to Chevrolet after unsuccessfully trying Plymouth for a year. Currently, the only traditional new-car stunt show in the United States is the Black Cat Hell Drivers, produced by Johnny Wisner.

« The Formula 1 land mine detector – The Pookie
Interesting photos of Batman and Robin c.1943 »