Craco is about 40 kilometres (25 mi) inland from the Gulf of Taranto at the instep of the “boot” of Italy. It is typical of the hill towns of the region with mildly undulating shapes and the lands surrounding it sown with wheat.

The town was built on a very steep summit for defensive reasons, giving it a stark and striking appearance and distinguishing it from the surrounding land which is characterized by soft shapes. 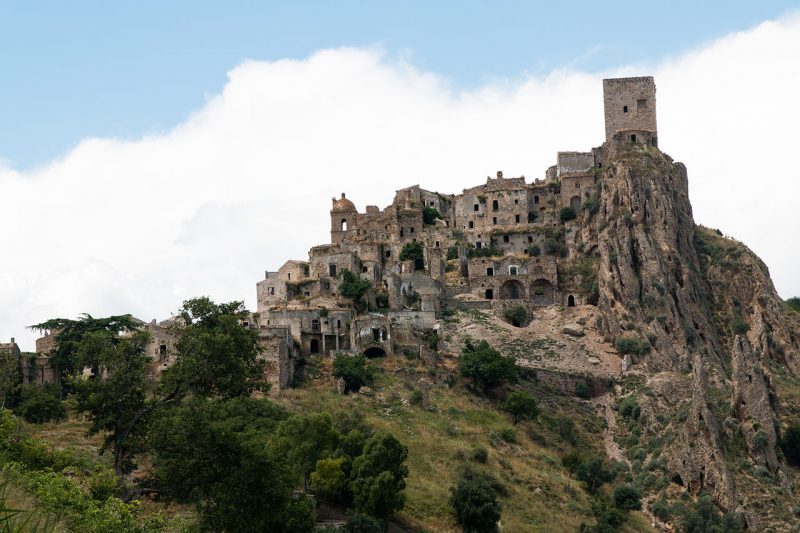 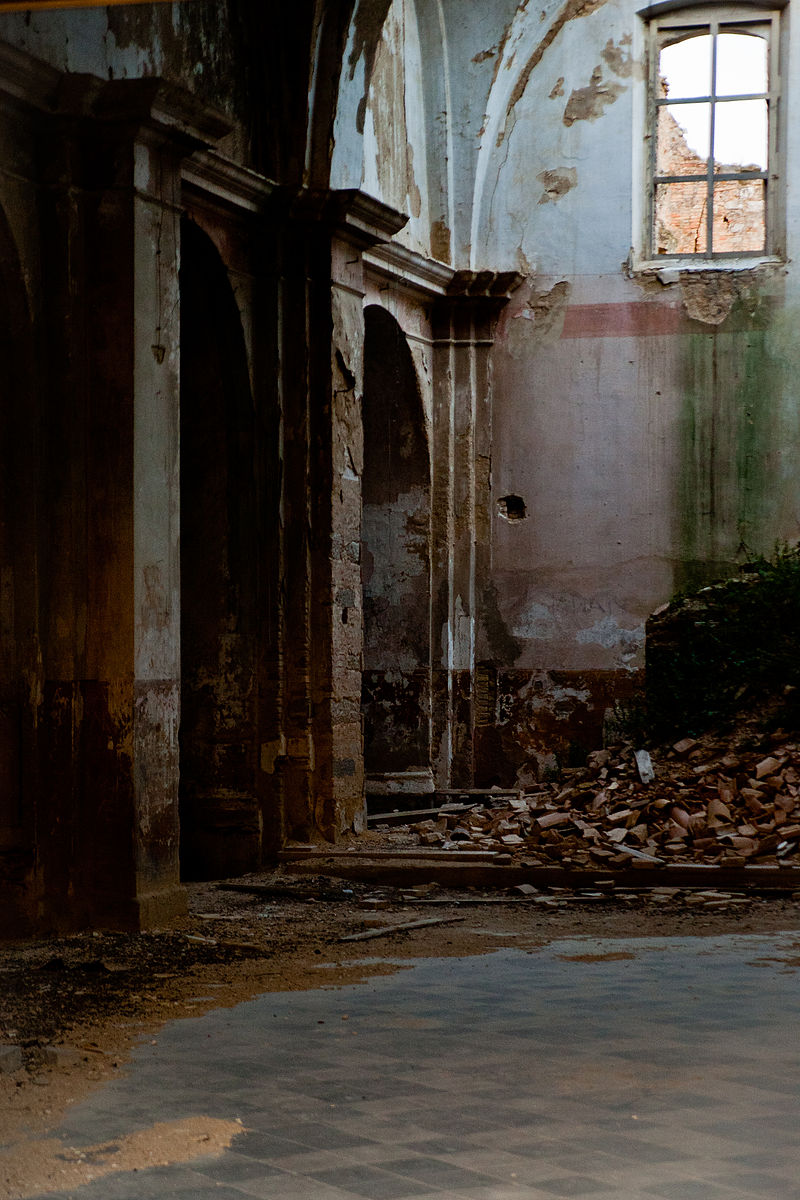 Around 540, the area was called “Montedoro” and inhabited by Greeks who moved inland from the coastal town of Metaponto. Tombs have been found dating from the 8th century suggesting the original settlement dates back to then.

The town’s name can be dated to 1060 when the land was the possession of Arnaldo, Archbishop of Tricarico, who called the area “Graculum” which means in Latin “little plowed field”.

This long association of the Church with the town had a great influence on the inhabitants.

From 1154 to 1168, the control of the village passed to the nobleman Eberto, probably of Norman origin, who established the first feudal control over the town. Then in 1179, Roberto of Pietrapertosa became the landlord of Craco.

Under Frederick II, Craco was an important military center and the Castle Tower became a prison. 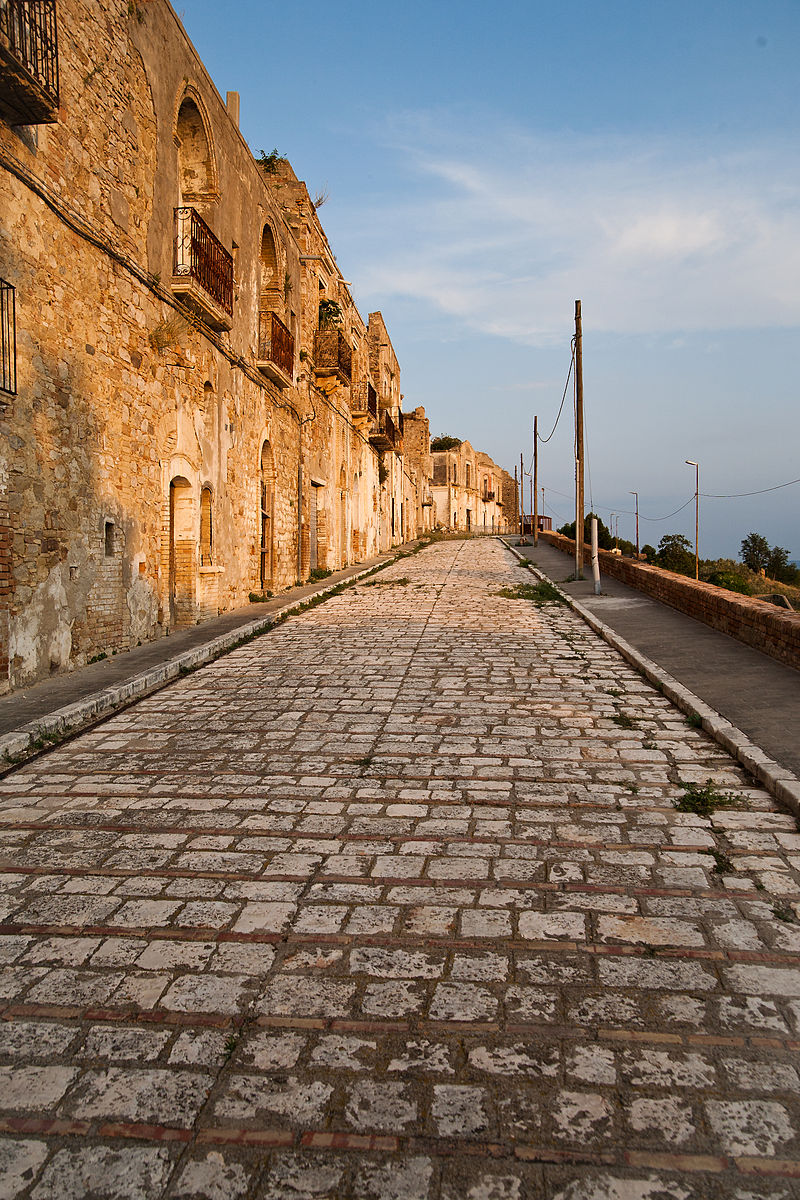 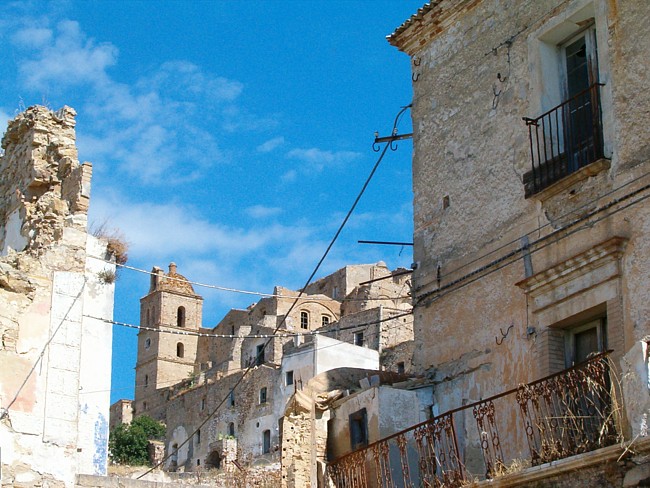 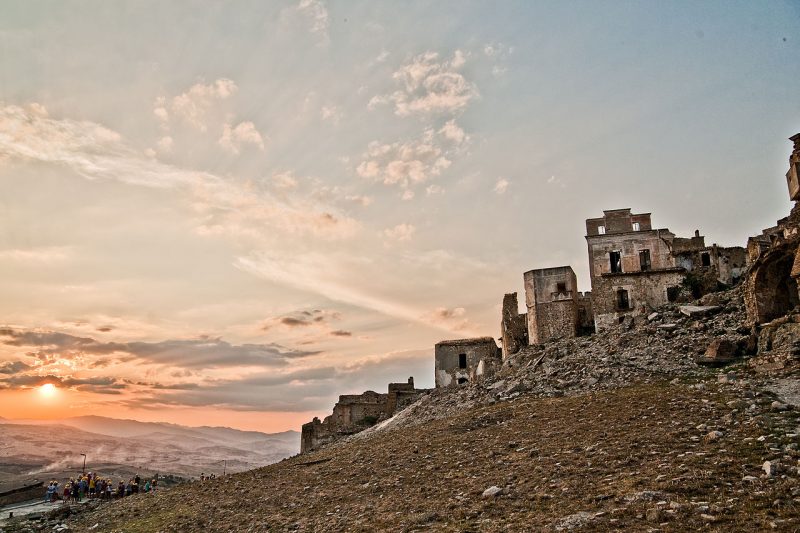 By the 15th century, four large plazas had developed in the town: Palazzo Maronna near the tower, Palazzo Grossi near the big church, Palazzo Carbone on the Rigirones property, and Palazzo Simonetti.

During 1656, a plague struck with hundreds dying and reducing the number of families in the town. 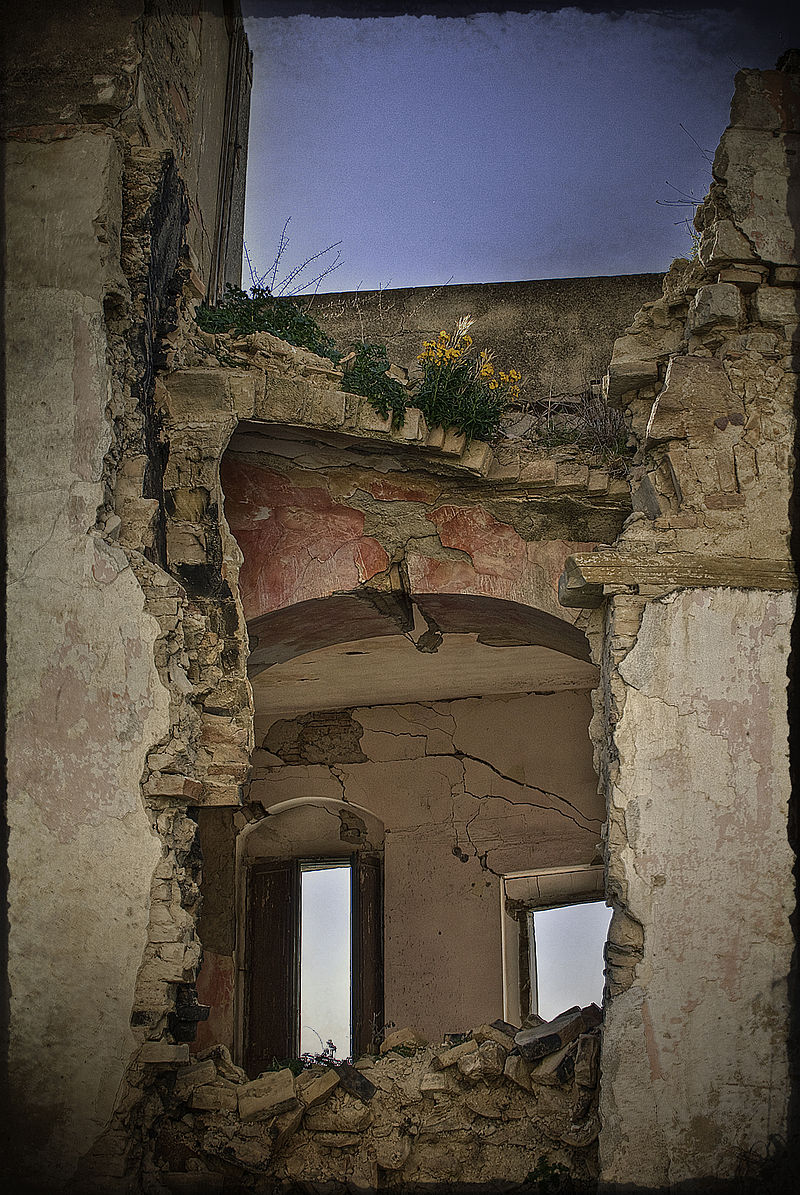 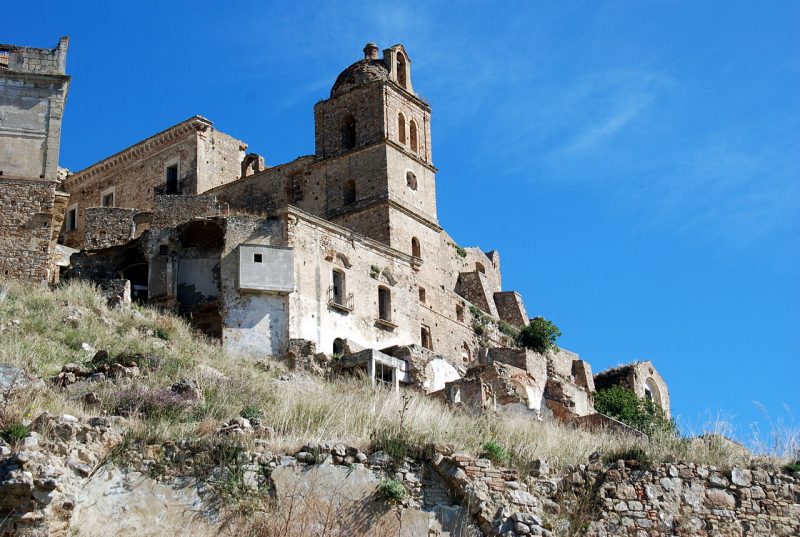 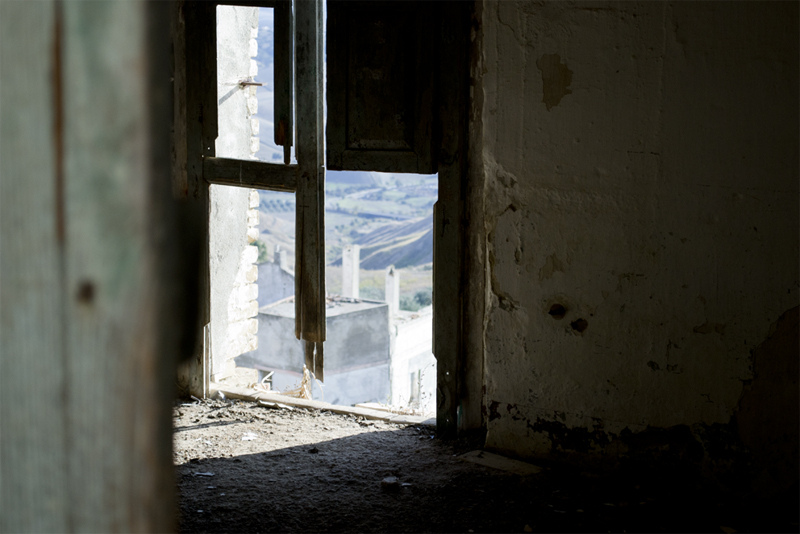 By 1799, with the proclamation of the Parthenopean Republic, the townspeople overthrew the Bourbon feudal system and Innocenzo De Cesare returned to Naples, where he had studied, and promoted an independent Municipality.

The republican revolution lasted few months and Craco returned under the Bourbon monarchy. Subsequently, the town fell under the control of theNapoleonic occupation.

Bands of brigands, supported by the Bourbon government in exile, attacked Craco on July 18, 1807, plundering and killing the pro-French notables. 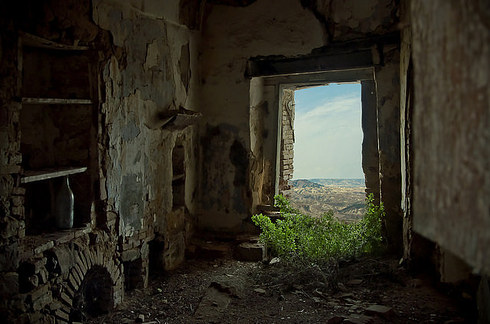 By 1815, the town was large enough to divide it into two districts: Torrevecchia, the highest area adjacent to the castle and tower, and Quarter della Chiesa Madre, the area adjacent to San Nicola’s Church.

After the unification of Italy, in 1861 Craco was conquered by the bands of brigands headed by Carmine Crocco 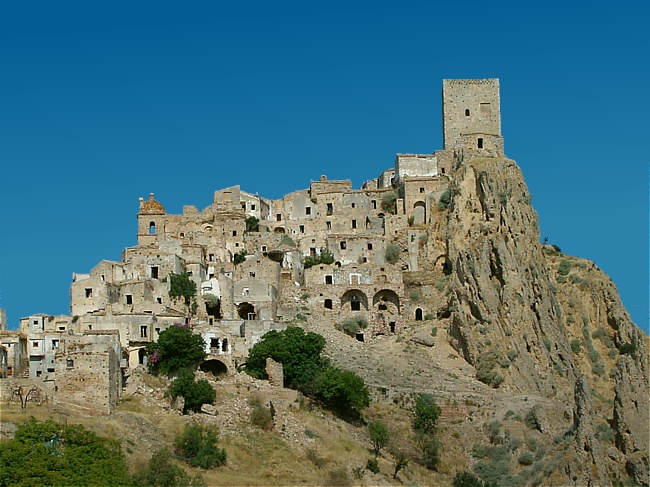 With the end of the civil strife the greatest difficulty the town faced became environmental and geological. From 1892 to 1922, over 1,300 Crachesi migrated to North America mainly due to poor agricultural conditions.

In 1963, Craco began to be evacuated due to a landslide and the inhabitants moved to the valley of “Craco Peschiera”. The landslide seems to have been provoked by works of infrastructure, sewer and water systems.

In 1972 a flood worsened the situation further, preventing a possible repopulation of the historic center and after the earthquake in 1980 the ancient site of Craco was completely abandoned.

In 2007, the descendants of the immigrants of Craco in the United States formed “The Craco Society”.