Fascianting color footage of Berlin from the 1900s

Take a look at this color film of Berlin from the period between 1890-1920 that reveals the beautiful colors of the streets of the Germany’s capital city.

The awesome part is the fact that the footage is from the pre war era in Berlin, so you can notice the stress-less ambiance and the everyday charm of the busy Berlin’s streets.

Although the footage is 98% of Berlin, it contains two scenes from Munich shot in 1914, the rest of is all Berlin. 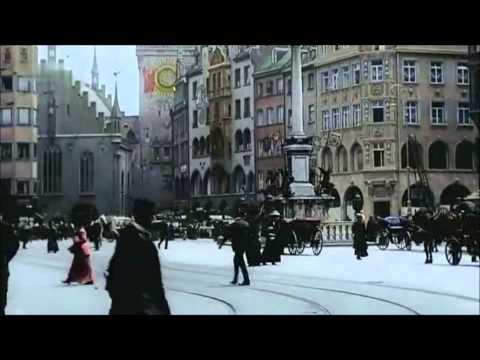 The history of Berlin consisted of its foundation in the 13th century, and later became the capital of the small country of Prussia. Prussia grew rapidly in the 18th and 19th century, and formed the basis of the German Empire in 1871. Berlin became a major world city, known for its leadership roles in science, the humanities, music, museums, higher education, government, diplomacy and military affairs.

The “spirit of 1914” was the overwhelming, enthusiastic support of all elements of the population for war in 1914. In the Reichstag, the vote for credits was unanimous, with all the Socialists joining in. One professor testified to a “great single feeling of moral elevation of soaring of religious sentiment, in short, the ascent of a whole people to the heights.”At the same time, there was a level of anxiety; most commentators predicted the short victorious war – but that hope was dashed in a matter of weeks, as the invasion of Belgium bogged down and the French Army held in front of Paris. The Western Front became a killing machine, as neither army moved more than a few hundred yards at a time. There had been no preparations before the war, and no stockpiles of essential goods. Industry was in chaos, unemployment soared while it took months to reconvert to munitions productions. In 1916, the Hindenburg Program called for the mobilization of all economic resources to produce artillery, shells, and machine guns. Church bells and copper roofs were ripped out and melted down.

Conditions on the homefront worsened month by month, for the British blockade of Germany cut off supplies of essential raw materials and foodstuffs, while the conscription of so many farmers (and horses) reduced the food supply. Likewise, the drafting of miners reduced the main energy source, coal. the textile factories produced Army uniforms, and warm clothing for civilians ran short. The device of using ersatz materials, such as paper and cardboard for cloth and leather proved unsatisfactory. Soap was in short supply, as was hot water.

Morale of both civilians and soldiers continued to sink but using the slogan of “sharing scarcity” the Berlin bureaucracy ran an efficient rationing system nevertheless. The food supply increasingly focused on potatoes and bread as it was harder and harder to buy meat. Rationing was installed, and soup kitchens were opened. The meat ration in late 1916 was only 31% of peacetime, and it fell to 12% in late 1918. The fish ration was 51% in 1916, and none at all by late 1917. The rations for cheese, butter, rice, cereals, eggs and lard were less than 20% of peacetime levels.In 1917 the harvest was poor, and the potato supply ran short, and Germans substituted almost inedible turnips; the “turnip winter” of 1917-18 was remembered with bitter distaste for generations.

German women were not employed in the Army, but large numbers took paid employment in industry and factories, and even larger numbers engaged in volunteer services. Housewives were taught how to cook without milk, eggs or fat; agencies helped widows find work. Banks, insurance companies and government offices for the first time hired women for clerical positions. Factories hired them for unskilled labor – by December 1917, half the workers in chemicals, metals, and machine tools were women. Laws protecting women in the workplace were relaxed, and factories set up canteens to provide food for their workers, lest their productivity fall off. The food situation in 1918 was better, because the harvest was better, but serious shortages continued, with high prices, and a complete lack of condiments and fresh fruit. Many migrants had flocked into Berlin to work in industry and the government ministries, which made for overcrowded housing. Reduced coal supplies left everyone in the cold. Daily life involved long working hours, poor health, and little or no recreation, as well as increasing anxiety for the safety of loved ones in the Army and in prisoner of war camps. The men who returned from the front were those who had been permanently crippled; wounded soldiers who recovered were sent back to the trenches.