Once a thriving diamond mine, Kolmanskop today is a ghost town swallowed by the desert

Every ghost town has its own sad story and a particular reason for the human exodus, and while most of the ghost towns are now urban decays, sometimes swallowed by nature, we found a place that was never meant to be a town to begin with.

In the middle of the Namib desert in South Africa, where there is no soul to find, there is a place with houses that look like a motif in a surreal art painting: rotting and  sand filled houses completely invaded by the desert.  That place is called Kolmanskop and this is its story: 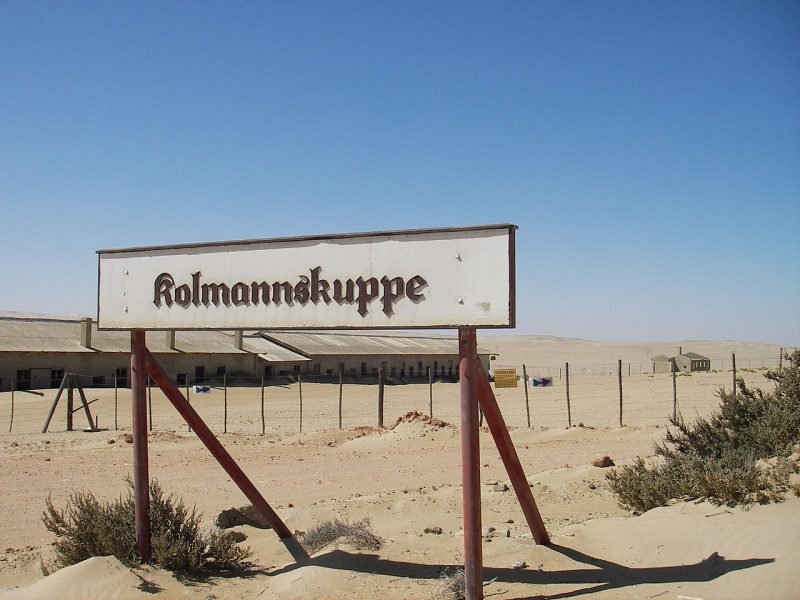 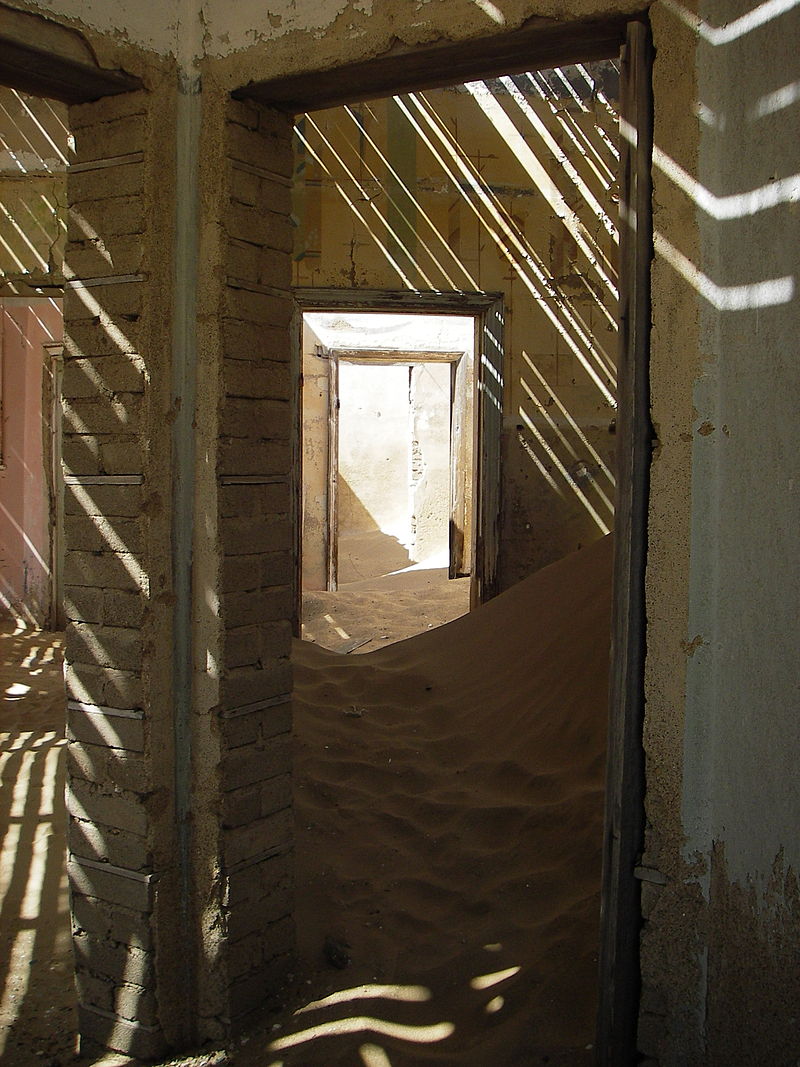 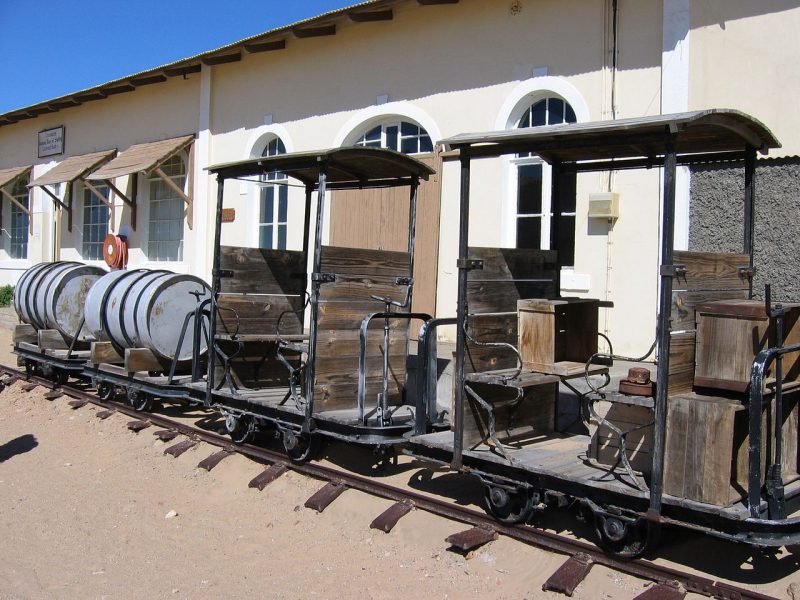 In 1908 the railway worker Zacharias Lewala  while shoveling  in the endless desert, a glowing reflection from a sparkling stone  revealed its face in the sand. Before he came to conclusion himself that the stone was obviously a diamond, Lewala, dazzled by the rare stone, decided to show his find to his supervisor – the German railway inspector August Stauch.There was no doubt, the rail worker stumbled upon a diamond, so it was more than obvious that the desert wouldn’t be so “deserted” anymore. 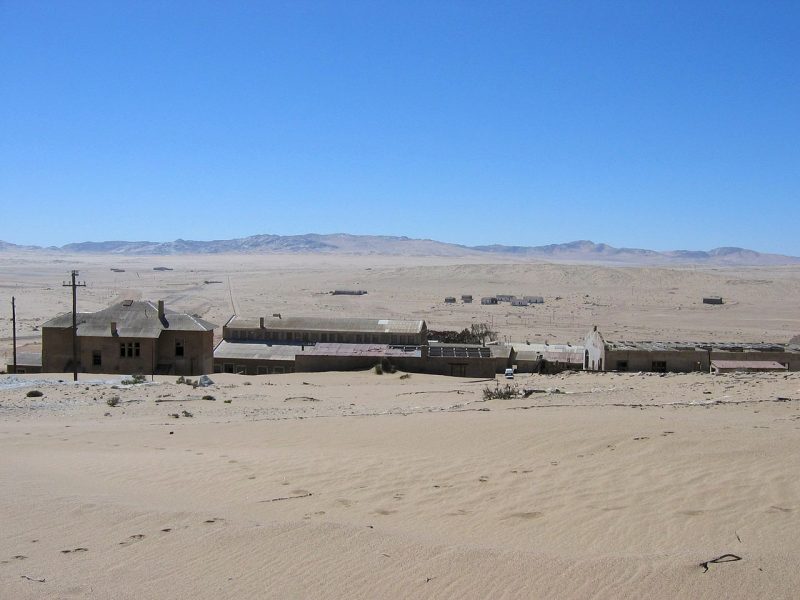 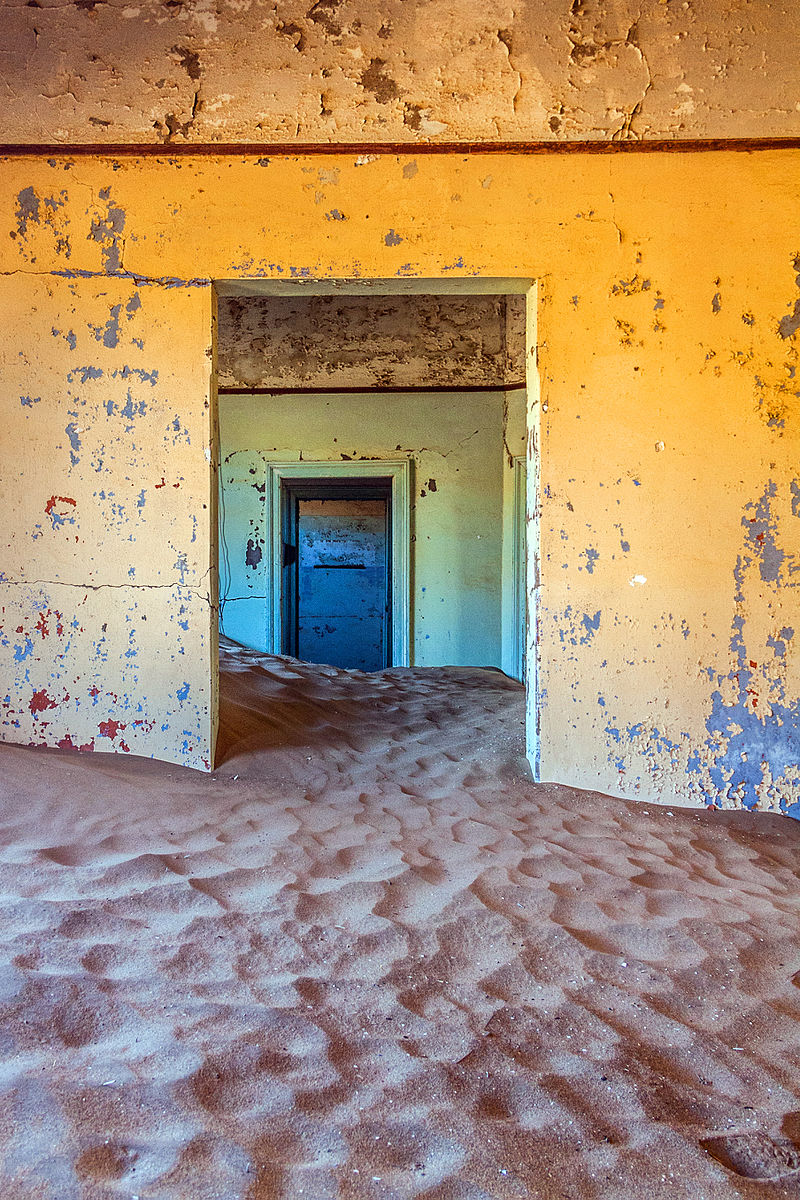 Realizing the area was rich in diamonds, German miners began settlement, and soon after the German government declared a large area as a “Sperrgebiet“, (forbidden territory) – started to exploit the diamond field.

Driven by the enormous wealth of the first diamond miners, the residents developed a bustling little village in the architectural style of a German town. The town included amenities and institutions including a hospital, ballroom, power station, school, skittle-alley, theater and sport-hall, casino, ice factory and the first x-ray-station in the southern hemisphere, as well as the first tram in Africa. It had a railway link to Lüderitz. 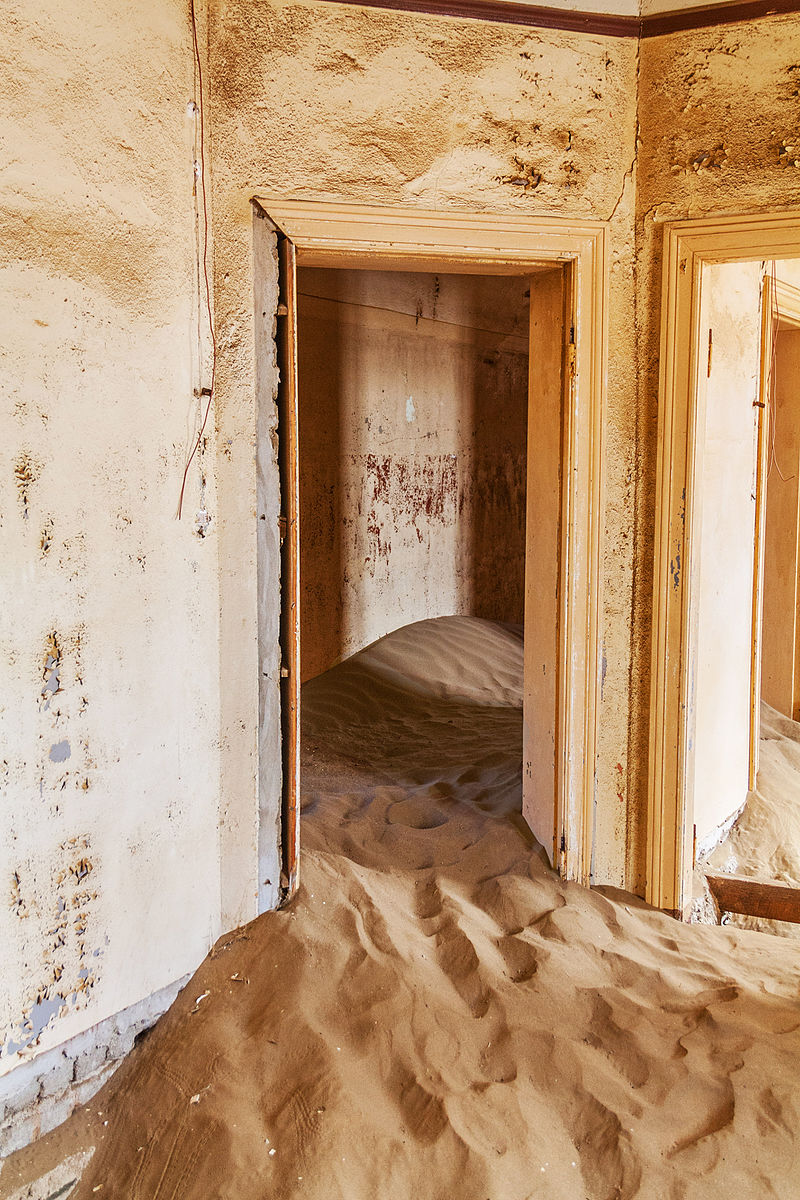 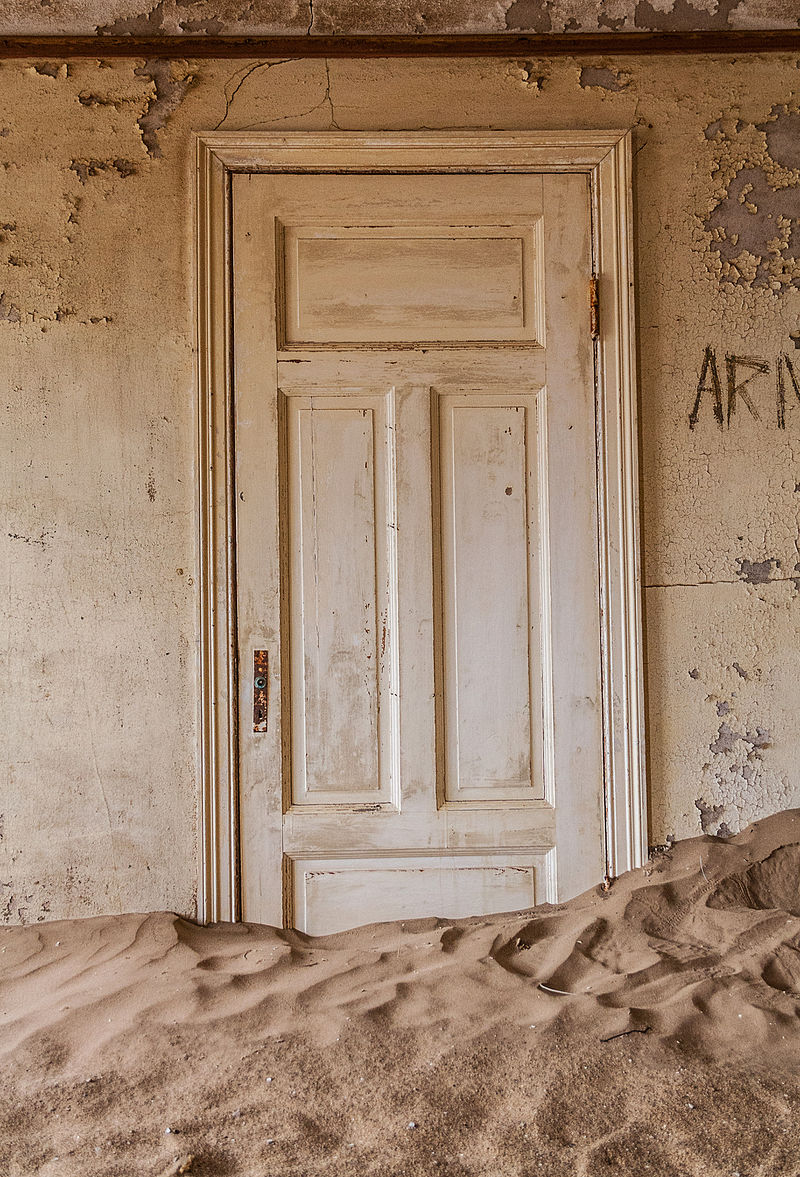 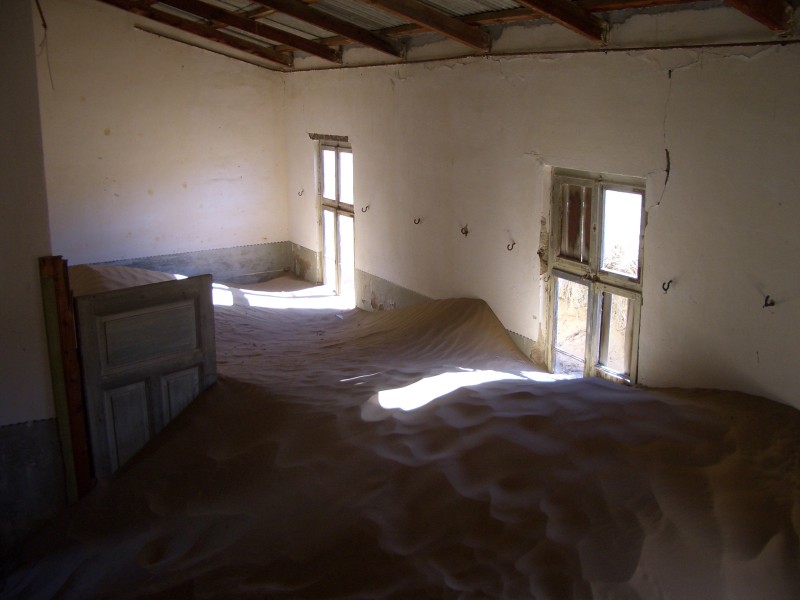 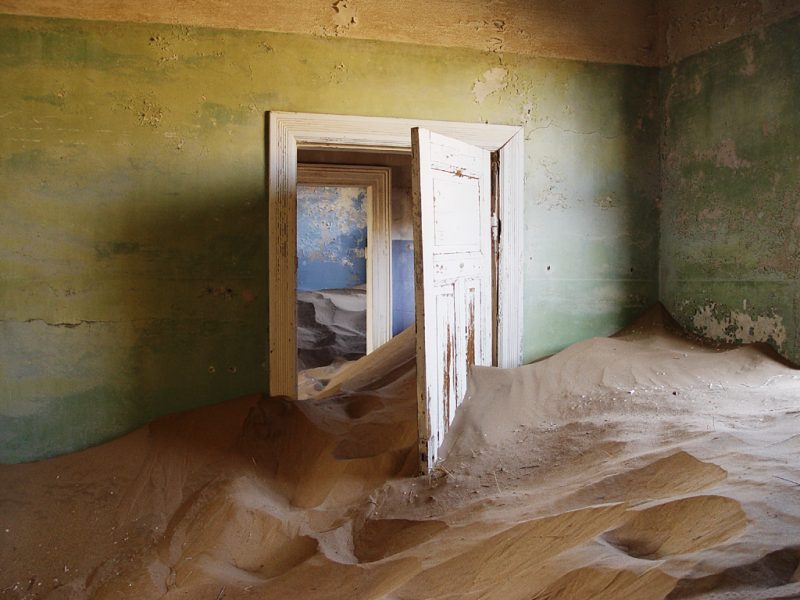 After the depopulation, sand invaded the houses.Wikimedia Commons 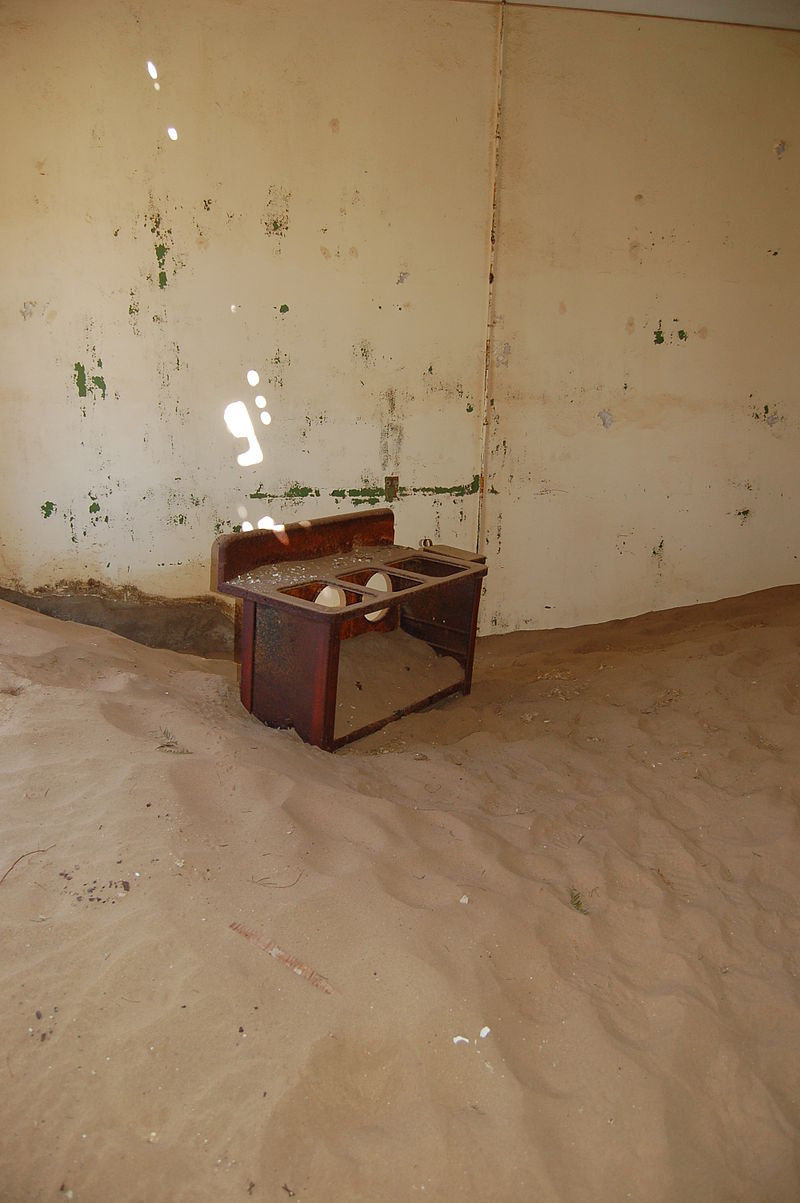 However, the desert knows no mercy for the voracious nature of human, and sand storms were something that happened every day. As a matter of fact, the name of the village derived from a particular incident that happened during  a sand storm. Kolmanskop  is Afrikaans for Coleman’s hill, named after a transport driver named Johnny Coleman who, during a sand storm, abandoned his ox wagon on a small incline opposite the settlement. 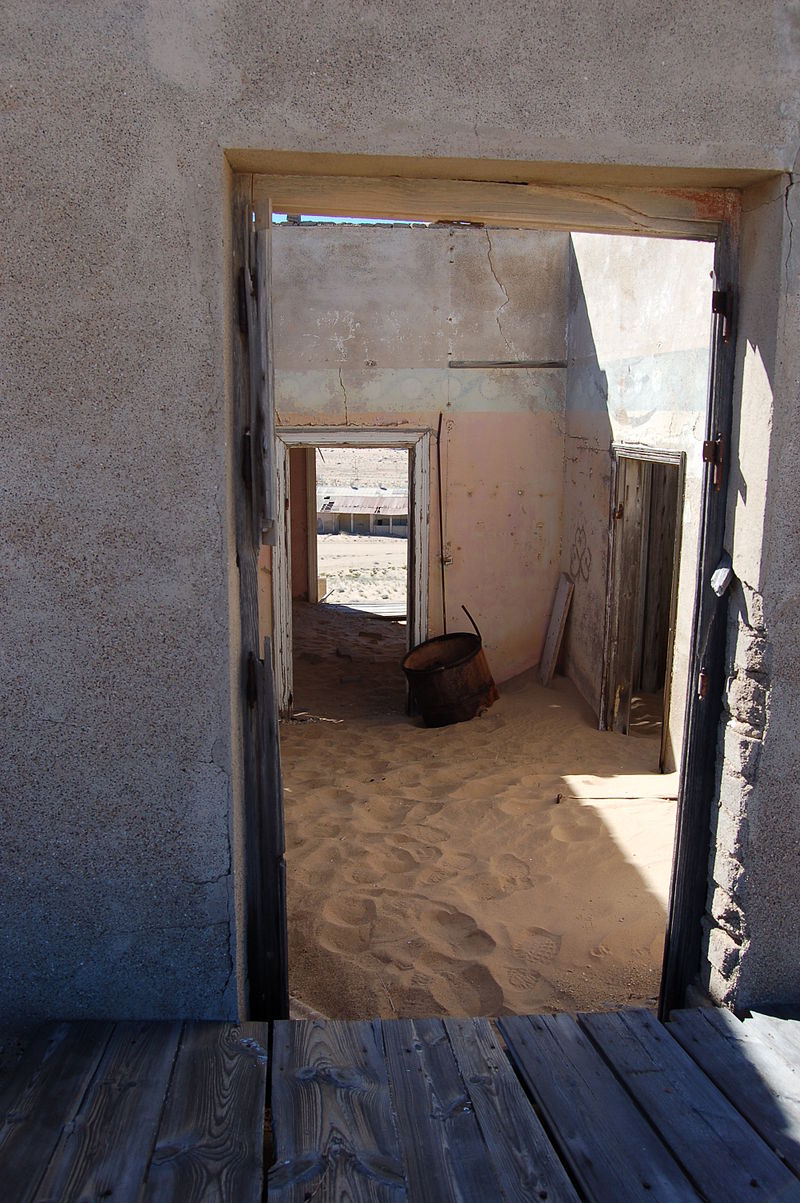 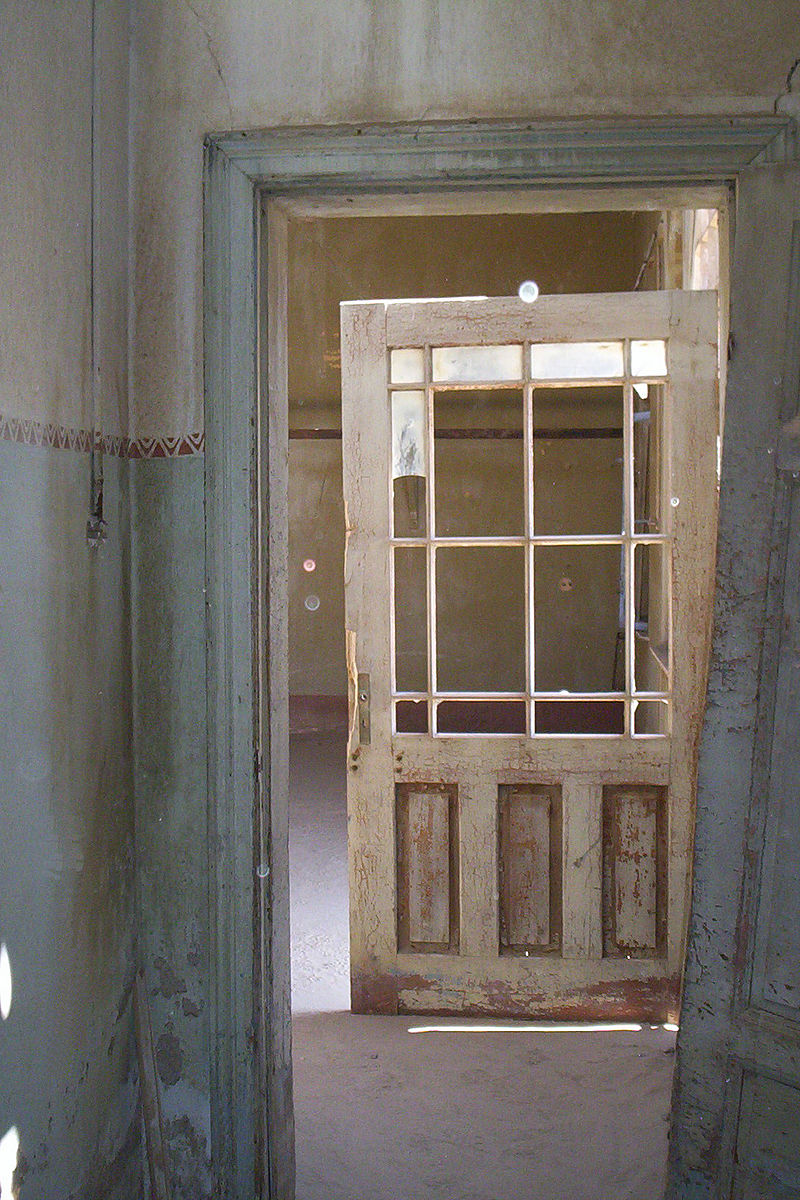 The community of Kolmanskopp reached its pinnacle in the 1920s, but the diamond prices crashed and the town slowly declined after World War One. At this time there were around 300 German adults, 800 Owambo contract workers and 49 children living in the town. Because of the isolation of the surroniding desert, Kolmanskop was a little Gemran heaven of culture and entertiment. 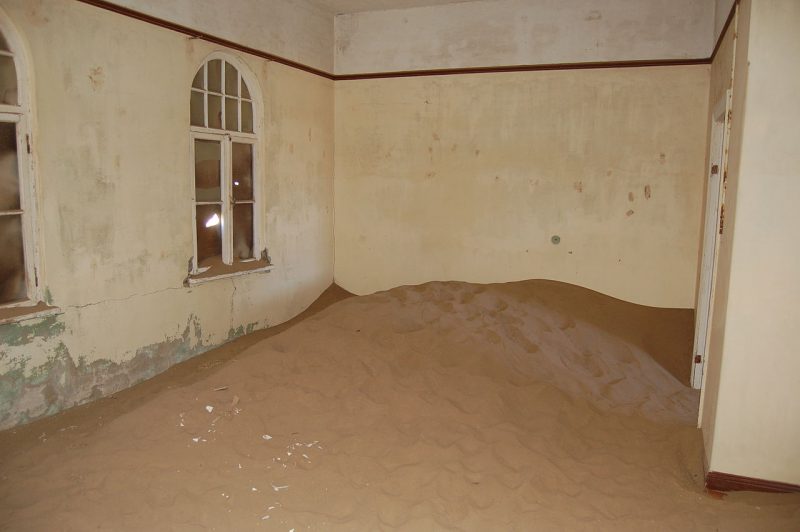 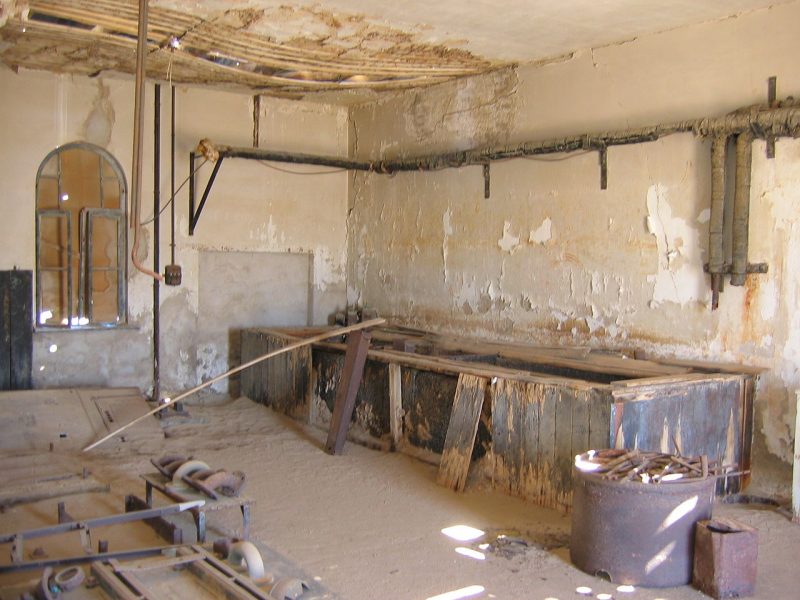 Sadly, as Kolmanskop’s  diamond-field was  slowly exhausted, there were new richer diamond deposit discovered further south, so the operations were moved to Oranjemund. So, little by little the inhabitants from Kolmanskop were leaving the town until 1954, the ” Little Germany in midst of the Desert” was completely neglected, left to the mercy of the desert. 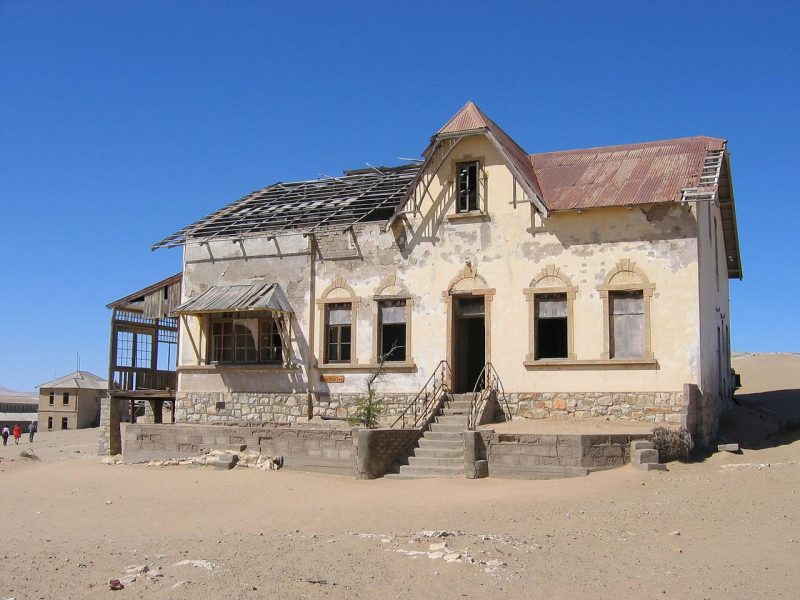 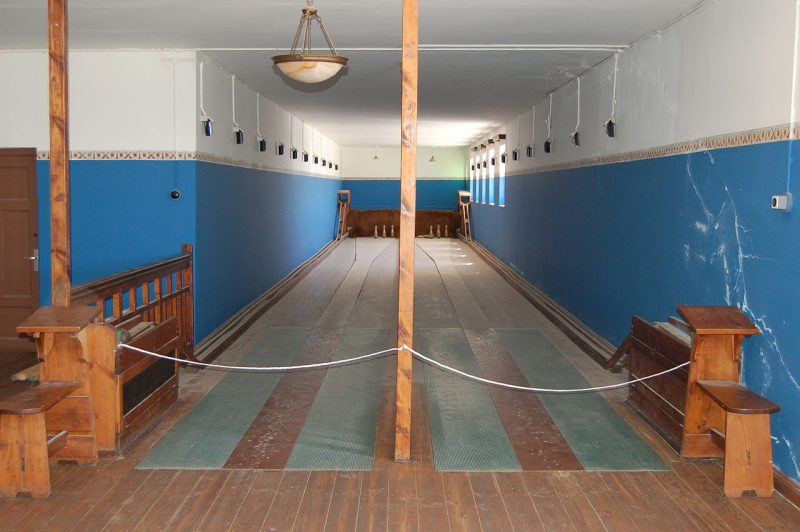 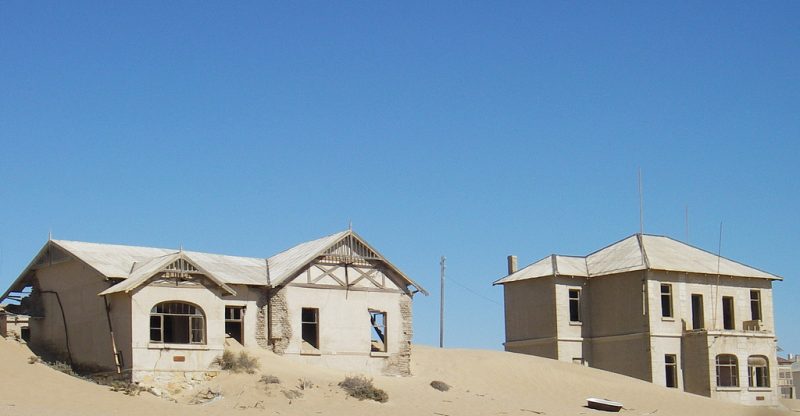 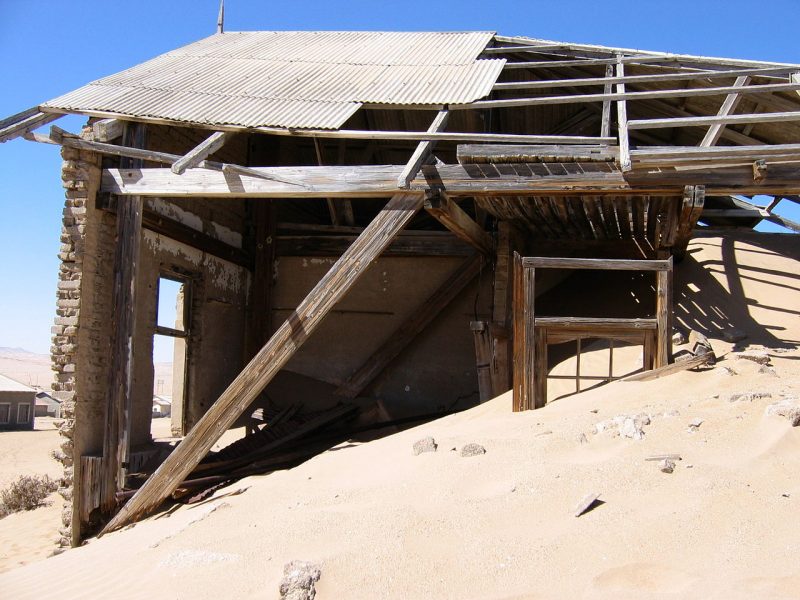 As we said before, the desert show mercy to nothing, and today Kolmanskop is an eerie shadow with crumbling ruins, completely encroached and swallowed by the desert. In the 1980s, the mining company De Beers restored some of the buildings and established a museum to reconcile the former glory of the town. 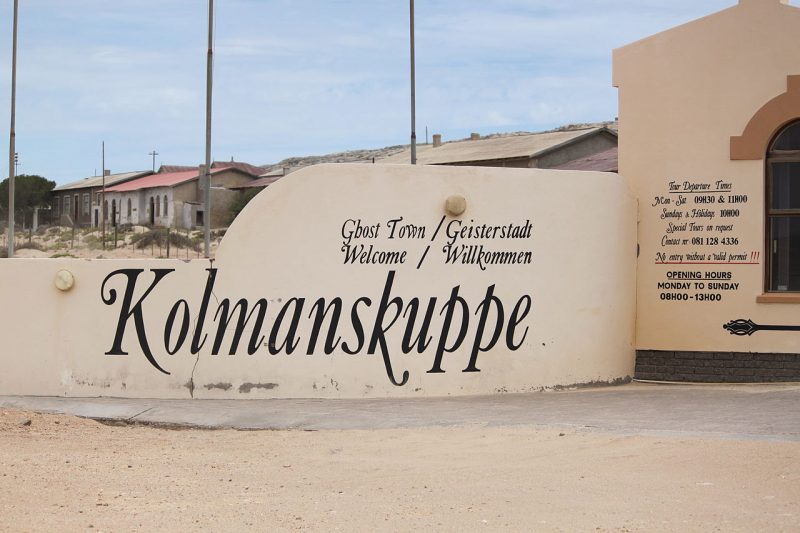 But, the ghost town digested by the desert is still not lonely,  groups of tourists, photographers and movie buffs are regular visitors of this place, since Kolmanskop was a movie location for various films such as The King Is Alive and the 1993 film, Dust Devil. 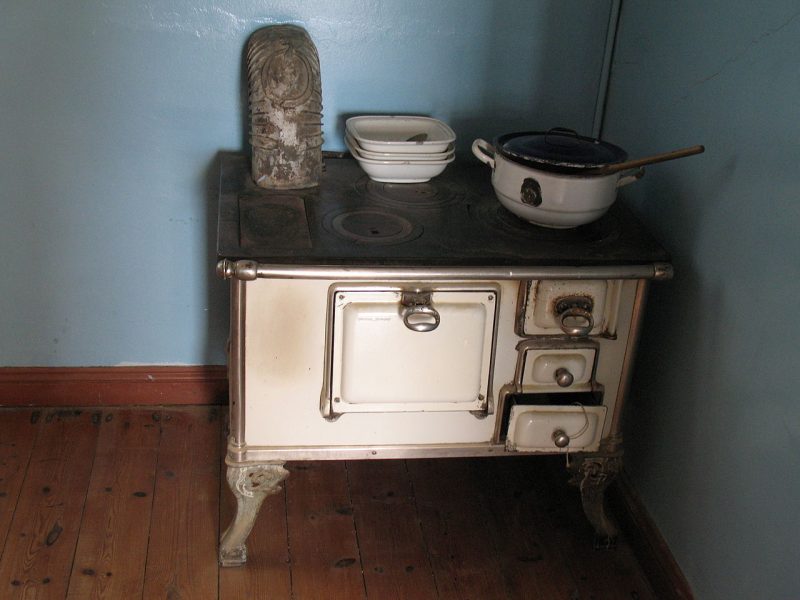 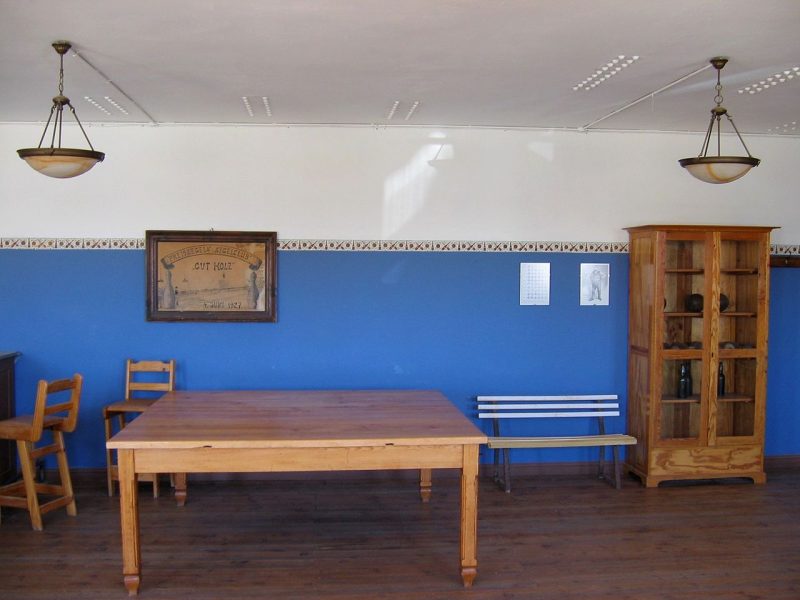 Interior of the museum house in Kolmanskop. WIkimedia Commons

Due to its location within the restricted area (Sperrgebiet) of the Namib desert, tourists need a permit to enter the town. Permits can be bought at the gate into the town and tours run daily at 9:30am and 11am local time(GMT+2), 10am on Sundays.

« Some of the weirdest, yet successful War Tactics throughout history!
Beautiful old photos capture Denmark back in 1934 »