The 2000-year-old Hallaton Helmet is the only Roman helmet ever found in Britain that still has most of its silver-gilt plating attached.

The Hallaton Helmet is a decorated iron Roman cavalry parade helmet originally covered in a sheet of silver and decorated in places with gold leaf.The helmet was discovered by 71-year-old Ken Wallace, a retired teacher and amateur archaeologist. He and other members of the Hallaton Fieldwork Group had found fragments of Roman pottery on a hill near Hallaton in 2000. He visited the site with a second-hand metal detector late one afternoon and found about 200 coins, which had been buried in a series of small pits dug into the clay. 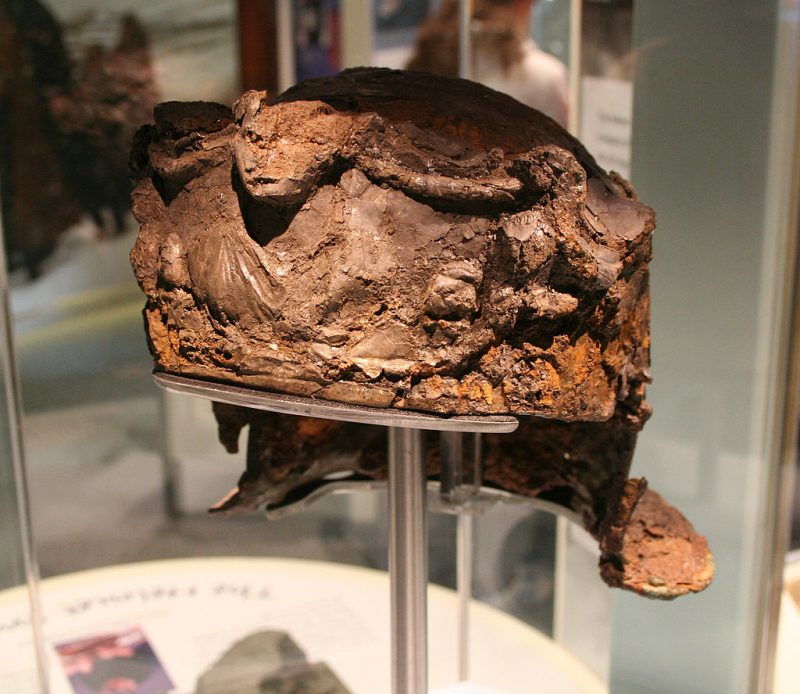 He also found another artifact, which he left in the ground overnight. The following day he returned to examine his discovery and found it that it was a silver ear. He reported the find to Leicestershire’s county archaeologist, who called in the University of Leicester Archaeological Services (ULAS) to excavate the site.The dig took place in the spring of 2003. 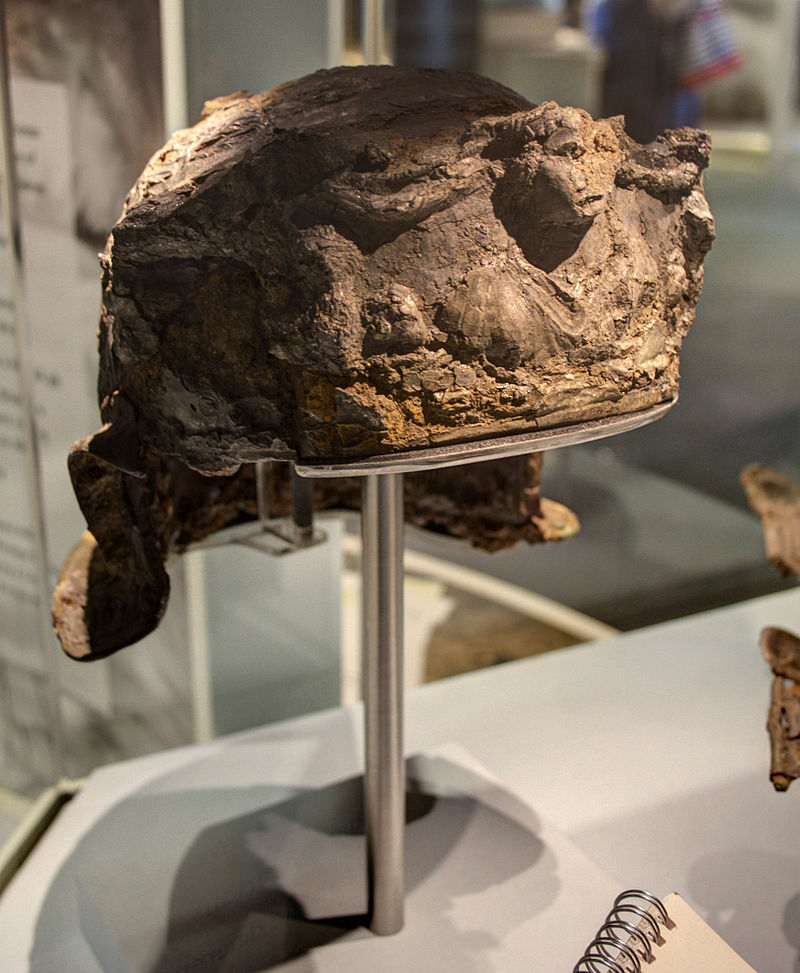 The helmet is an example of a three-piece Roman ceremonial cavalry helmet, made of sheet iron covered with silver sheet and partly decorated with gold leaf.Such helmets were worn by Roman auxiliary cavalrymen in displays known as hippika gymnasia and may also have been worn in battle, despite their relative thinness and lavish decoration.Horses and riders wore lavishly decorated clothes, armour and plumes while performing feats of horsemanship and re-enacting historical and legendary battles, such as the wars of the Greeks and Trojans. 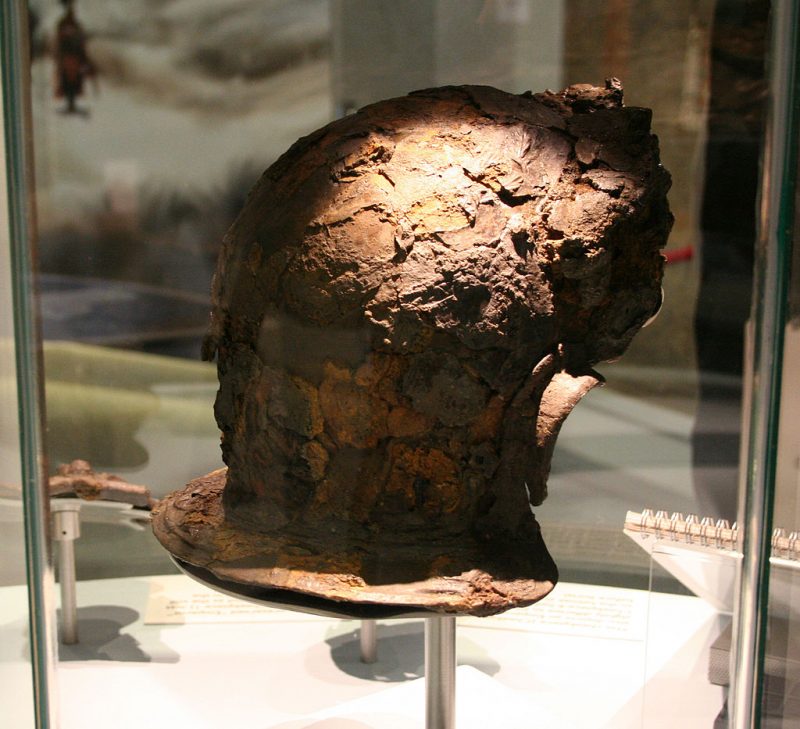 It is the only Roman helmet ever found in Britain that still has most of its silver-gilt plating attached.The helmet would originally have had two cheekpieces attached via holes in front of its ear guards. It has a prominent brow guard, the shape of which is similar to that of the 3rd-century Guisborough Helmet, discovered in 1864 near Guisborough in Redcar and Cleveland. The rear of the helmet bowl descended to form a neck guard 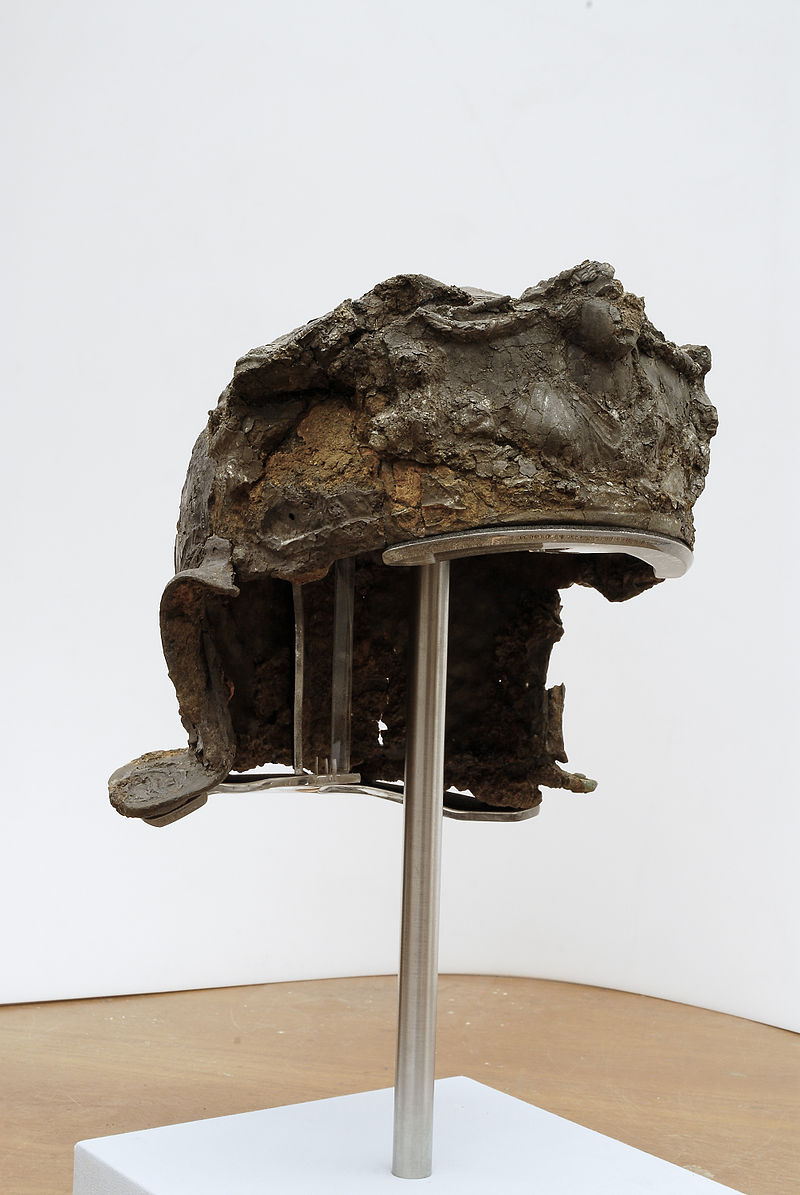 The helmet was too fragile to be excavated in situ so it was removed within a block of earth held together with plaster of Paris. It was taken to the British Museum in London for conservation, which took nine years of work by conservator Marilyn Hockey and her colleagues Fleur Shearman and Duygu Çamurcuoğlu. Corrosion and the effects of time had shattered the helmet into thousands of pieces,most of which were smaller than the nail on a person’s little finger.The reconstructed and conserved helmet was unveiled in January 2012. 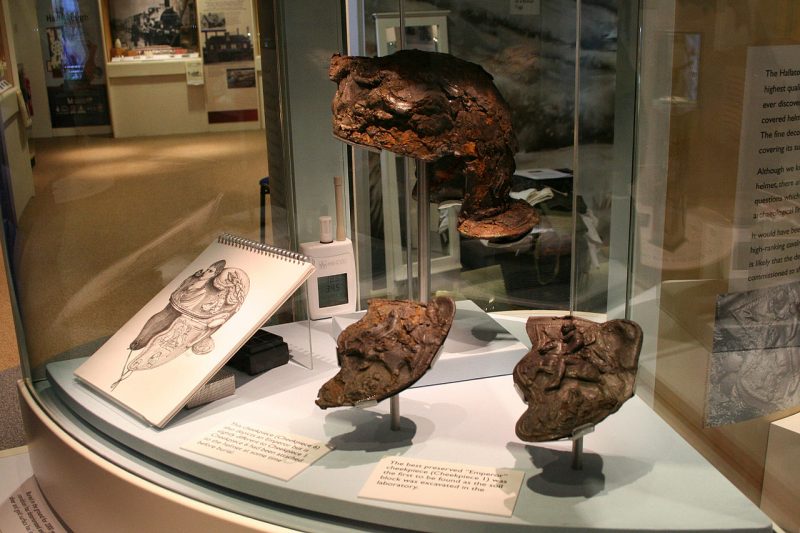 The Hallaton Helmet on display at the Harborough Museum, Market Harborough

Leicester County Council was able to raise £1 million to buy the entire hoard and pay for the conservation of the helmet, with the assistance of donations from the Heritage Lottery Fund (which gave a £650,000 grant), the Art Fund and other trusts and charities.The helmet was valued at £300,000; under the terms of the Treasure Act, Ken Wallace and the landowner were each awarded £150,000.

The helmet was put on permanent public display at the end of January 2012 at the Harborough Museum in Market Harborough, nine miles from the site where the hoard was found, alongside other objects found at Hallaton.

« Soviet Military Power: Declassified US intelligence illustrations from the cold war era
Some of the weirdest, yet successful War Tactics throughout history! »