Hollywood was incorporated as a municipality on November 14, 1903, by a vote of 88 for and 77 against. On January 30, 1904, the voters in Hollywood decided, by a vote of 113 to 96, for the banishment of liquor in the city, except when it was being sold for medicinal purposes. Neither hotels nor restaurants were allowed to serve wine or liquor before or after meals.

In 1910, the city voted for merger with Los Angeles in order to secure an adequate water supply and to gain access to the L.A. sewer system. With annexation, the name of Prospect Avenue changed to Hollywood Boulevard and all the street numbers were also changed. 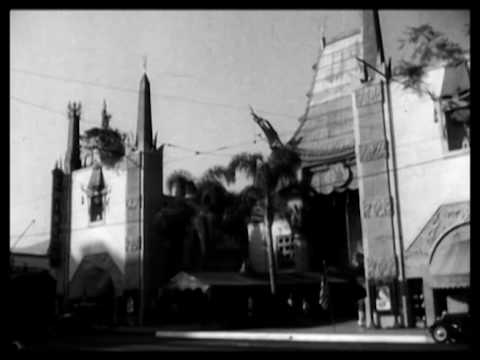 By 1912, major motion-picture companies had set up production near or in Los Angeles.In the early 1900s, most motion picture patents were held by Thomas Edison’s Motion Picture Patents Company in New Jersey, and filmmakers were often sued to stop their productions. To escape this, filmmakers began moving out west, where Edison’s patents could not be enforced.Also, the weather was ideal and there was quick access to various settings. Los Angeles became the capital of the film industry.

Director D. W. Griffith was the first to make a motion picture in Hollywood. His 17-minute short film In Old California (1910) was filmed for the Biograph Company.Although Hollywood banned movie theaters—of which it had none—before annexation that year, Los Angeles had no such restriction.The first film by a Hollywood studio, Nestor Motion Picture Company, was shot on October 26, 1911. The Whitley home was used as its set, and the unnamed movie was filmed in the middle of their groves at the corner of Whitley Avenue and Hollywood Boulevard.

The first studio in Hollywood, the Nestor Company, was established by the New Jersey–based Centaur Company in a roadhouse at 6121 Sunset Boulevard (the corner of Gower), in October 1911.

Four major film companies – Paramount, Warner Bros., RKO, and Columbia – had their studios in Hollywood, as did several minor companies and rental studios. In the 1920s, Hollywood was the fifth largest industry in the nation.

During the early 1950s, the Hollywood Freeway was constructed through the northeast corner of Hollywood.

The Capitol Records Building on Vine Street, just north of Hollywood Boulevard, was built in 1956, and the Hollywood Walk of Fame was created in 1958 as a tribute to artists and other significant contributors to the entertainment industry. The official opening was on February 8, 1960.

The Hollywood Boulevard Commercial and Entertainment District was listed in the National Register of Historic Places in 1985.

The Dolby Theatre, which opened in 2001 as the Kodak Theatre at the Hollywood & Highland Center mall, is the home of the Oscars. The mall is located where the historic Hollywood Hotel once stood.

After years of serious decline in the 1980s, many Hollywood landmarks were threatened with demolition. Columbia Square, at the northeast corner of Sunset Boulevard and Gower Street, is part of the ongoing rebirth of Hollywood. The Art Deco-style studio complex completed in 1938, which was once the legendary Hollywood headquarters for CBS, became home to a new generation of popular broadcasters when cable television networks MTV, Comedy Central, BET and Spike TV consolidated their offices here in 2014 as part of a $420-million office, residential and retail complex.Since 2000, Hollywood has been increasingly gentrified due to revitalization by private enterprise and public planners.