The Early-Modern period – Striking coins with a Screw press

A press is a metalworking machine tool used to shape or cut metal by deforming it with a die. It is frequently used to punch holes in sheet metal in one operation, rather than by cutting the hole or drilling. If used as a punch, the tool itself consists of a punch and a matching die, into which it very closely fits. Both are usually precision machined and then hardened. The material is introduced between the punch and die, and the machine operated. The punch will cut through the material in one movement by shearing it. The punch and die may be of any desired shape, so odd shaped holes and cutouts may be created. If used as a forging tool the dies can be many different shapes varying from flat to various shapes that will mold the metal to the desired configuration. 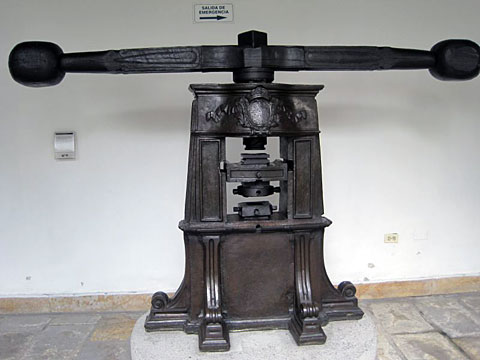 Screw presses for striking coins were “invented” in 1506. An Italian, Donato Bramante (1444-1514) modified an existing press for striking lead seals for Pope Julius II (1503-13). Other early screw presses were built by Nicolo Grosso and used at the Florence Mint for ‘blanking’ at approximately the same time. While the screw press was a major improvement, it took more than a century to replace ‘entrenched’ moneyers and hammered coinage. Moneyers fought the innovation despite the fact coins could be struck with a screw press in quicker time creating a far more uniform coin with a better rim by cold coining. When the screw press was introduced at the London Mint in 1551, the moneyers revolted, the screw press rejected, and it was not until 1662, over a century later, that it was in full use there. The development of the screw press, delayed for over a century, was then widely accepted at mints around the world. It was first powered by men, and continued so, but some mints adapted it for water power, then for steam power. 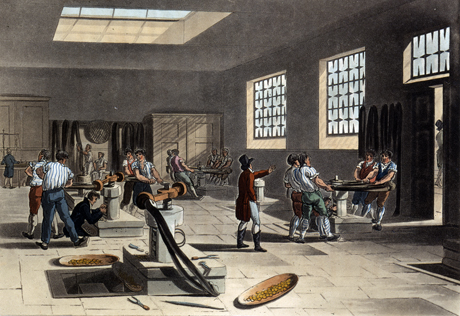 A moneyer is someone who physically creates money

The minting process in England was finally mechanised in the early 1660s, shortly after the Restoration of Charles II. It has been suggested that the change may have been prompted by the king’s shame at the contrast between the first coins of his reign and those of Louis XIV.

Fry presses are a type of screw press that is operated manually or by power through a friction drive. When powered they are called a Power Screw-Press. The flywheel or weight arm attached to the screw produces the driving force. The force of stopping the flywheel would produce a theoretically infinite force, however, it is limited by the stretch of the heavy frame. 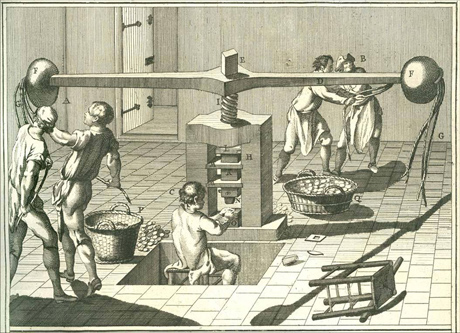 Under the new system, the metal was cast into fillets of the breadth and little more than the thickness of the intended coin. These fillets were reduced by a rolling mill, operated by horses tramping round a cellar below, and from the fillets blanks were punched by a small fly press. The striking of the blanks was performed in a simple and effective screw press, which brought down the upper die onto the blank by the action of a large screw carrying the die in a holder mounted at its lower end. The screw was set in motion by workmen pulling at the weighted end of a long horizontal bar and descended with great force to hit the blank resting on the bottom die. Blanks could be struck at the rate of one every two seconds, but it was extremely tiring and the teams of workmen could not work for long at a time. Even less to be envied was the moneyer, usually young and nimble, who had the task of flicking the newly struck coin away from the dies and putting a fresh blank in its place. 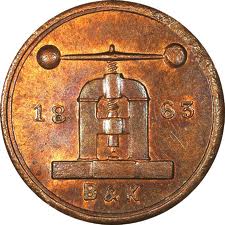 A coin with an impression of a coining press