Archaeologists who were digging at a brick quarry in Peterborough, Cambridgshire found something quite extraordinary. They believe they have found the first-ever Bronze Age home. Historians and researchers can now get an idea of how people lived thousands of years ago.

The quarry that the house was found in is comparable to the Roman city Pompeii. Why? Like Pompeii, this home was buried by a volcanic eruption, which has provided a natural time capsule by covering the home in ash for centuries and preserving it.

The home was discovered at Must Farm quarry in Whittlesey in the East Anglian fens. The homes were built on a river and destroyed in a fire nearly 3,000 years ago. The remains of the homes were pushed into the water and silt, which is how the homes were so preserved over the years. Some of the archaeologists who found the homes considered it rude to excavate the home because they said it felt like the owners were still nearby.

After the discovery, there was a one million pound project launched in order to excavate the site. The project was funded by government heritage agency Historic England and quarry owners Forterra. Archaeologists on the site have since found jars with food still inside, wooden bowls, animal bones, textiles, and glass beads. All of these items suggest that the owners were “at the top of their society.” 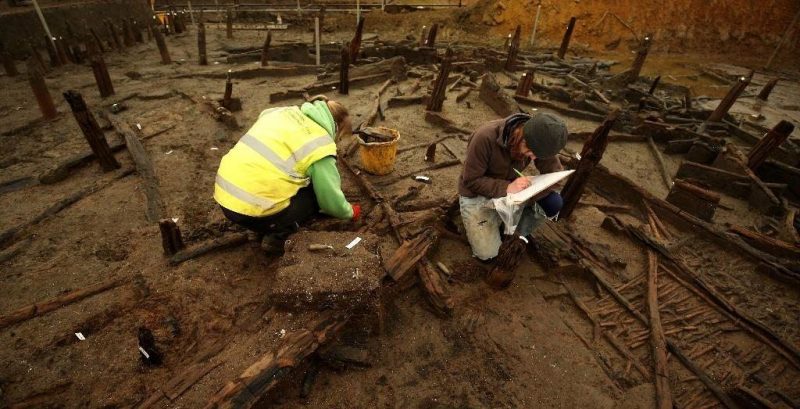 The dig began in August of this year after the team removed six feet of earth. The team was run by Cambridge University’s Cambridge Archaeological Unit. The team also found a well-preserved palisade fence made of ash trees, wattle walls, and the remains of a roof of another home that was destroyed in the fire between the years of 920 BC and 800 BC.

After properly excavating everything they have found, the team will then work on the partial remains. They will start by carefully removing the charred roofs of the remaining buildings to see if items inside survived the fire.

The site director, Mark Knight, said that they are effectively about to walk on the inside of a Bronze Age roundhouse for the first time in British history. He also added that it will be amazing to step into someone’s home and see how they cooked, how they kept food, what they wore, and more. No one has ever been able to study people from the Bronze Age in such depth.

The team had found a human skull, but Knight said that they would have to do further excavation before they could determine whether or not the person died in the fire or if the skull was an enemy or ancestor that was on display. Knight joked around saying that it could be “Granny’s head.”

The team has hired a fire expert to determine whether or not the fire was set deliberately or if it was an accident. The fire could have even been set by hostile forces as well.

Knight expressed that usually in a dig such as this one, researchers will find simple shards. However, he and his team were lucky enough to find not only a full home but many household items, including food items, that were intact.

One of the items that Knight found absolutely amazing was a range of different sized pots. He explained it as if someone had gone to the market and bought the whole set. These days, it is not uncommon for a person to buy a whole set of pots of dishes to match. However, this discovery was something completely new for the time.

This excavation is considered the first large-scale investigation in the fens. However, the site is not an empty one. There had been nine preserved log boats found in 2011.

After all of the excavation is done, the remains will be taken to be analyzed. Once the analyzing is done, the pieces will be displayed at Peterborough Museum and other venues.

« International Women’s Day: All the fearless women in history who deserve a mention
This silent footage from the 1920s shows a Knocker Up before the alarm clock was invented »