B-17, how to fly in formation, via the B-17 Pilot Training Manual…not be flown closer to one another than 50 feet from nose to tail 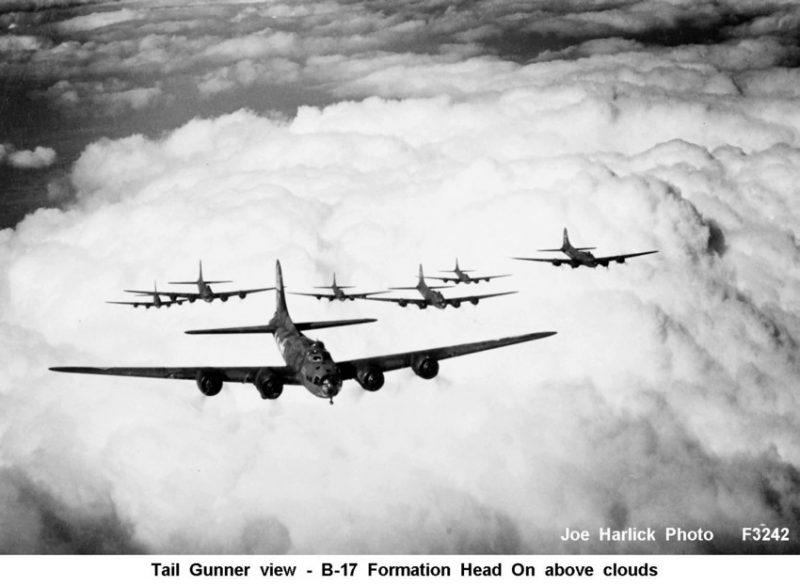 When you get into combat you will learn that your best assurance of becoming a veteran of World War II is the good, well-planned, and well-executed formation.

Formation flying is the first requisite of successful operation of the heavy bomber in combat. Groups that are noted for their proficiency in formation flying are usually the groups with the lowest casualty rates. Proper formation provides: controlled and concentrated firepower, maneuverability, cross-cover, precise bombing pattern, and better fighter protection.

Formation flying in 4-engine airplanes presents greater problems than formation flying in smaller aircraft. The problems increase in almost direct proportion to the airplane’s size and weight. In the B-17, relatively slower response to power and control changes require a much higher degree of anticipation on the part of the pilot. Therefore you must allow a greater factor of safety.

Violent maneuvers are unnecessary and seldom encountered. Close flying becomes an added hazard which accomplishes no purpose and is not even an indication of a good formation. Bear in mind that it is much more difficult to maintain position when flying with proper spacing between airplanes than with wings overlapping.

Safety first is a prerequisite of a good formation because a greater number of lives and a larger amount of equipment is in the hands of the responsible pilot in a large 4-engine airplane.

In flying the Vee formation, aircraft will and wingtip to wingtip. Maintain this horizontal clearance whenever vertical clearance is less than 50 feet, thus providing a minimum of 50 feet clearance between wingtips as well as the line of nose and tail under all formation flying conditions.

At H hour, all ships start engines and stand by on interphone frequency. The formation leader checks with all planes in his formation. After this he calls the tower and clears his formation for taxi and takeoff instructions. As he taxies out, No. 2 man follows, then No. 3, etc., each airplane taking the same place respectively on the ground that it is assigned in the air. As soon as the leader parks at an angle near the end of the takeoff strip, the other aircraft do likewise. At this point all aircraft run up engines and get ready for takeoff. The leader makes certain that everyone is ready to go before he pulls out on the takeoff strip.

Formation takeoffs should be cleared from an airdrome in a rapid and efficient manner. Individual takeoffs will be made. Therefore, the following method is suggested:

The leader goes into takeoff position and takes off at H hour. No. 2 man starts pulling into position as soon as the leader starts rolling. When the leader’s wheel leaves the runway, No. 2 starts taking off. (The time lapse is about 30 seconds.) The leader flies straight ahead at 150 mph, 300-500 feet per minute ascent, for one minute plus 30 seconds for each airplane in the formation. He levels off at 1000 feet above the terrain to prevent high rates of climb for succeeding aircraft. (Cruise at 150 mph.)

As soon as the leader has flown out his exact time, he makes a 180° half-needle-width turn to the left. The second airplane in formation assumes the outside or No. 2 position, while the third airplane assumes the inside or No. 3 position. The leader of the second element assumes position on the outside of the formation and his elements assemble on him in the same manner.

The 3-airplane Vee is the standard formation and the basic one from which other formations are developed. Variations of the Vee offer a concentration of firepower for defense under close control with sufficient maneuverability for all normal missions, and afford a bombing pattern which is most effective. 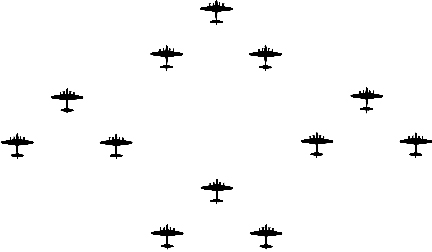 A formation of 6 aircraft is known as a flight or squadron, which is composed of two 3-airplane Vees. At least 50 feet vertical clearance will be maintained between elements in a flight and at least 50 feet horizontal clearance between the leader of the second element and wingmen of the first element.

From this basic squadron formation of 6 aircraft, the group, made up of 12 to 18 aircraft, is formed. Second or third flights will be echeloned right or left, up or down, with a vertical clearance of 150 feet and a horizontal clearance of 100 feet.

The high squadron flies 150 feet above and 100 feet behind the lead squadron with its second element stacked down and echeloned to the outside of the formation.

The low squadron flies 150 feet below and 100 feet behind the lead squadron with its second element stacked down and echeloned to the outside of the formation.

Flights may be placed in the high or low positions, as desired by the leader, by order over radio and receipt of acknowledgment. The flights simply go up or down in their respective positions. In this formation the positions of individual airplanes in each element will be those always flown in the 3-airplane Vee.

With but small variations, this basic formation can be changed to the combat formations used overseas. It is the job of training to teach a basic formation which can be readily understood and flown by students and easily adapted to tactical use.

It is particularly important for the leader to avoid violent maneuvers or improper positions which will cause undue difficulty for the wingmen.

The spacing of the wing positions in Vee formation is:

Turns in Vee formation will maintain the relative position of all airplanes in the element. In other words, the wing airplanes will keep their wings parallel to the wings of the lead airplane and on the same plane. 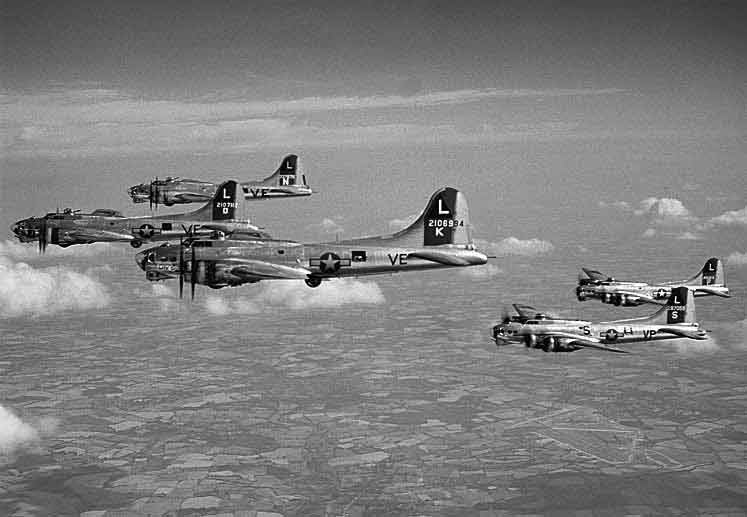 When changing from Vee to Trail, the wingman into whom a turn is made while in Vee assumes the No. 2 position in Trail, while the outside man is in the No. 3 position in the Trail. When returning from Trail to Vee, the No. 3 man in Trail assumes the inside position of the Vee. Remember this, for it is the procedure for changing from Vee to Trail and from Trail to Vee. Also, it provides a method for changing wing positions in a Vee formation.

It is often desirable for a leader to change the wing position of his formation, i.e., to reverse the right and left positions. If this maneuver is not executed properly in accordance with a pre-arranged plan, there is danger of collision. A safe plan is for the leader to announce on the radio that the formation will go into Trail on his first turn. If the turn is executed to the right, it will result in the inside man, or No. 2 wingman, being No. 2 in the Trail, and the outside man, or No. 3 wingman, being No. 3 in the Trail when the turn is completed. The leader will then announce that the formation will re-form in Vee when the Trail executes a turn to the right. This second turn to the right will re-form the Vee with wingmen reversed.

Formation will go into Trail from the usual 90° turn to the right or left. The leader of the formation will make a 45° turn to the left and fly that heading for approximately 20 seconds or until such time as a turn back will place him in the rear of the formation. When the No. 1 airplane starts his 45° turn, the No. 2 plane in the Trail immediately becomes the leader of the formation and continues to fly straight ahead. At the end of 20 seconds, or thereabouts, the original leader turns back and takes up the No. 3 position in his element, or No. 6 position if in a flight of 6, and notifies the new leader that the maneuver is complete.

The formation will approach the field at an altitude of 1500 feet above the terrain in Vee in such a direction that two 90° turns, either right or left, can be made to bring the formation heading upwind in line with the runway on which the landing is to be made. The formation will go into Trail, stepped down, on the first 90° turn and the leader will order gears down as soon as the Trail has been formed, at which time the checklist may be started. The leader will then fly up to the runway and peel off to the left when he is directly over the spot on which he intends to land. Each succeeding plane will peel off without interval spacing achieved on first turn. The leader will put down 1/3 flaps, retard throttles, and make a continuous power let-down with just enough base leg to enable him to make a straight-away approach rather than a landing out of a turn, other ships in the formation spacing themselves and accomplishing the same approximate pattern of let-down and approach as their leader. There will be no more than 3 ships on the runway at the same time (one turning off, one midway, and one just landing).

The formation will approach the airdrome at an altitude of 1500 feet above the terrain into the wind up the landing runway, at which time the wheels will be ordered down by the leader and checklist accomplished. The second element will maintain assigned position echeloned to the right. The leader will call No. 3, when over the edge of the landing runway, to peel off, No. 3 acknowledging by peeling off. No. 1 follows; No. 2 following No. 1; No. 6 following No. 2 and so on. Approach and landing accomplished as outlined.

A Group Landing from Vee

The group will approach the airfield in an echelon of flights to the right. This echelon of flights will be accomplished by order of the leader by radio and acknowledged by the leader of flight indicated. The leader will have the formation with high squadron (flight) in second position, low squadron in third position still stacked down in low position, relative to leader’s flight, but maintaining position on high squadron. Each flight will land individually, the lead flight landing first as previously outlined. The high and low flights will complete a 360° turn and land in turn as shown by diagram.

In conclusion, it should be stated that a good formation is a safe formation. An air collision is the result of carelessness or lack of clear understanding between members of the formation. lf the simple rules, as outlined, are followed explicitly, there is no excuse for mistakes in the air. A mistake in formation flying may result in costly, irreparable loss of lives and equipment.

It should be reiterated that it is not a display of skill to fly too close; it is a display of bad judgment and lack of common sense.