This is the earliest surviving Ice Hockey film footage, taken in 1898

Ice hockey is believed to have evolved from simple stick and ball games played in the 18th and 19th century United Kingdom and elsewhere. These games were brought to Canada and the United States and several similar winter games using informal rules were developed, such as “shinny” and “ice polo”. The contemporary sport of ice hockey was developed in Canada, most notably in Montreal, where the first indoor hockey game was played on March 3, 1875. Some characteristics of that game, such as the length of the ice rink and the use of a puck, have been retained to this day. Amateur ice hockey leagues began in the 1880s, and professional ice hockey originated around 1900. The Stanley Cup, emblematic of ice hockey club supremacy, was first awarded in 1893 to recognize the Canadian amateur champion and later became the championship trophy of the NHL. In the early 1900s, the Canadian rules were adopted by the Ligue Internationale de Hockey sur Glace, the precursor of the IIHF and the sport was played for the first time in the Olympics in the Olympic Games of 1920. 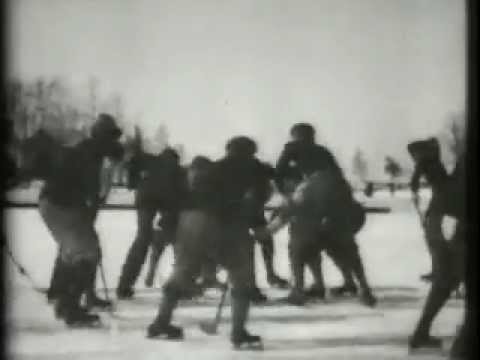 The name “hockey” has no clear origin. Its first known mention is from the 1773 book Juvenile Sports and Pastimes, to Which Are Prefixed, Memoirs of the Author: Including a New Mode of Infant Education, by Richard Johnson (Pseud. Master Michel Angelo), whose chapter XI was titled “New Improvements on the Game of Hockey”.The belief that hockey was mentioned in a 1363 proclamation by King Edward III of England is based on modern translations of the proclamation, which was originally in Latin and explicitly forbade the games “Pilam Manualem, Pedivam, & Bacularem: & ad Canibucam & Gallorum Pugnam”. The English historian and biographer John Strype did not use the word “hockey” when he translated the proclamation in 1720.

The 1573 Statute of Galway banned a sport called “‘hokie’ — the hurling of a little ball with sticks or staves”.A form of this word was thus being used in the 16th century, though much removed from its current usage.

According to the Austin Hockey Association, the word “puck” derives from the Scots Gaelic puc or the Irish poc (to poke, punch or deliver a blow). “…The blow given by a hurler to the ball with his caman or hurley is always called a puck.

British soldiers and immigrants to Canada and the United States brought their stick-and-ball games with them and played them on the ice and snow of winter. In 1825, John Franklin wrote “The game of hockey played on the ice was the morning sport” on Great Bear Lake during one of his Arctic expeditions. A mid-1830s watercolour portrays New Brunswick lieutenant governor Archibald Campbell and his family with British soldiers on skates playing a stick-on-ice sport. Captain R.G.A. Levinge, a British Army officer in New Brunswick during Campbell’s time, wrote about “hockey on ice” on Chippewa Creek (a tributary of the Niagara River) in 1839. In 1843 another British Army officer in Kingston, Ontario wrote, “Began to skate this year, improved quickly and had great fun at hockey on the ice.” An 1859Boston Evening Gazette article referred to an early game of hockey on ice in Halifax that year.An 1835 painting by John O’Toole depicts skaters with sticks and bung on a frozen stream in the American state of West Virginia.