The home built motorhome made from two 1962 Buick station wagons 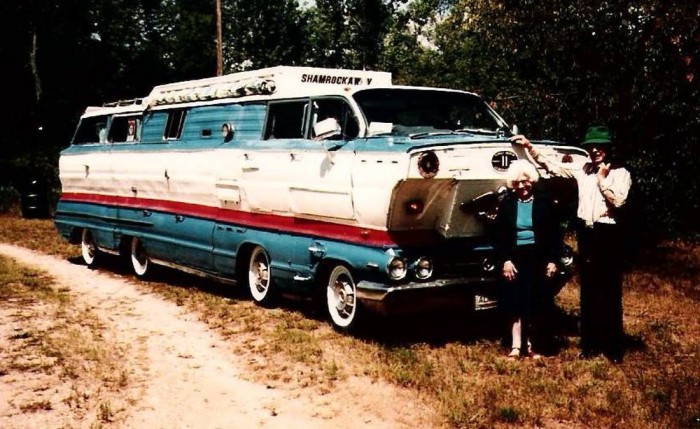 Looks like a motorhome made from It appears to be made of 2 1962 Buick station wagons. I just don’t think the laws and regulations would let you get away with such a massive modification nowadays.  It’s the ShamRockAway, and yes, two 1962 Buick wagons are in there somewhere. Actually, there’s a great shot after the jump of the two Buicks as they were being re-arranged.

Hemmingsblog had several posts on it, the final one unraveling the mystery of how this wild rig came to be.  One J. Dennis McGuire, who was a pioneer RVer and had converted a couple of buses before, started this project after he retired, and finished it at the age of sixty-nine(!) He always liked Buicks, so that was the main ingredient on the recipe. The third axle is the driven one, and the 401 nailhead must have been working pretty hard through the Dynaflow transmission to scoot the 9960 lb rig down the road. The turning circle on this must have been massive. 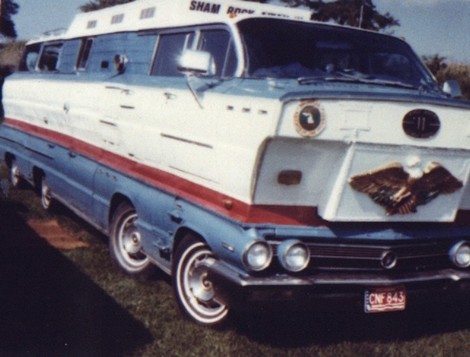 Back in here glory days. source

Colleen, the daughter of builder J. Dennis McGuire of Alma, Michigan, a noted RV enthusiast provides a few photos and a brief history of the motorhome, which Dennis dubbed the ShamRockAway:

ShamRockAway was one of many projects Dad did when he retired. When people ask him, Why? He would say, “Why not?” He was an inventor and motor home enthusiast since 1948. Dad bought a 1942 school bus and converted it to a camper as it was called back then. He also converted a 1958 Flexible coach in the 1960s and toured the United States with his family, Michael and Colleen. He was one of the founding members of the FMCA, at the first meeting in Maine. Other projects he worked on were a wind machine to generate electricity which he mounted on his house and a semi electric car. 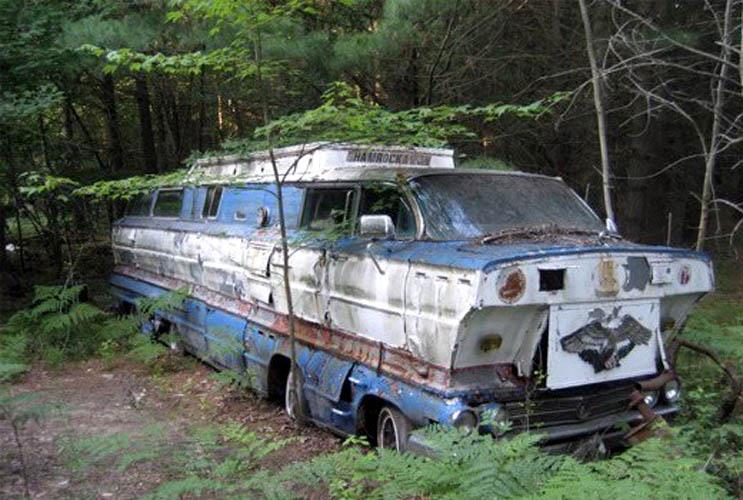 Parked up and waiting for restoration? source

Buicks were his favorite cars to drive. “I have always enjoyed the smoother ride offered by the coil springs on a Buick automobile and decided to have a motor home with the same handling and comfort.” 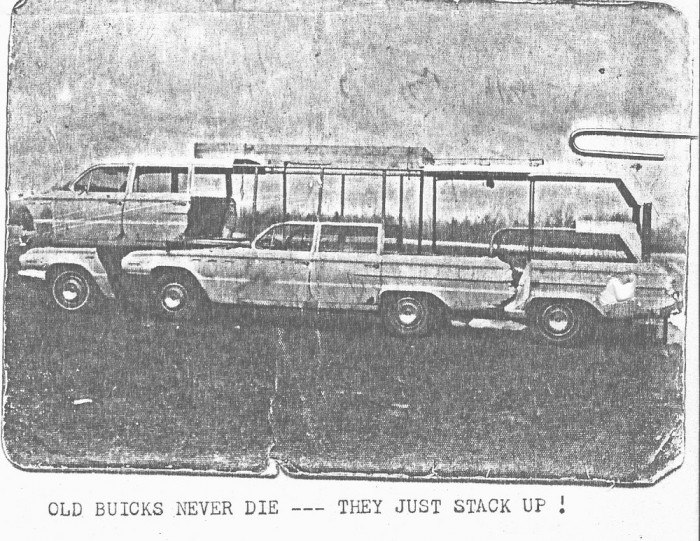 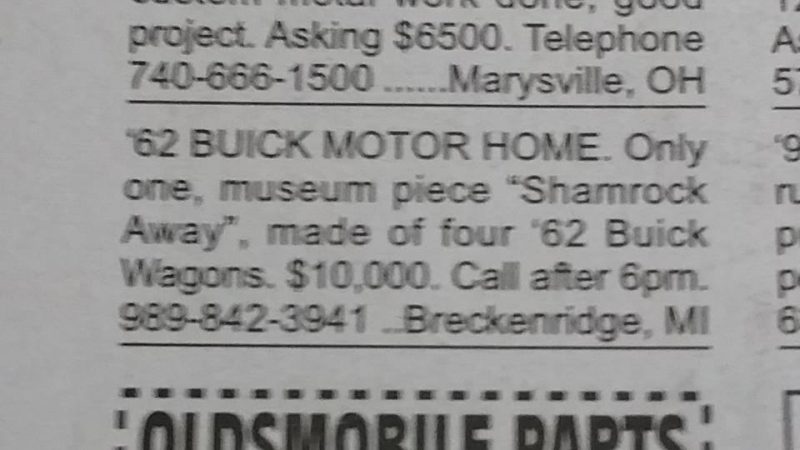 The inside of the doors in front were built to hold maps and booklets. A special folding door enlarged the bathroom area. The kitchen and stowage areas were molded into existing space with ample room for walking between the living and driving compartments. The driver sits over the engine. Dad also put in an altimeter, a CB radio, vacuum gauges, auxiliary battery switch and an unusual horn—a bicycle bell to ring when people waved or kids that thought he had an air horn. How people would smile!!!!

“I just kept one wagon whole in the middle, split another in half, and welded the front and back on the one in center. It fit together like a glove.”

“People would joke and even make bets that I couldn’t drive it away with all the licensing and safety regulations. Why if we didn’t have the doubters, we wouldn’t have the doers in this county.”

“I didn’t build anything, I just reassembled!”

Dad completed his project when he was 69 years old. He and Mom traveled many states including Arizona and Pennsylvania in the ShamRockAway. Mom, Lucile, kept a log of some of the unusual comments on the CB as they traveled. Here are a few: “Mercy, Mercy, Mercy, What the heck is it?” “The Martians have landed. Take to the hills.” “Smokey won’t know which way to chase it” “I’ll have to cut down on my pills, I’m seeing things.” “It’s an eighteen wheeler that has been in a wreck.” “Just saw Noah’s Ark.” “You’d look funny too if you were cut in the middle.” 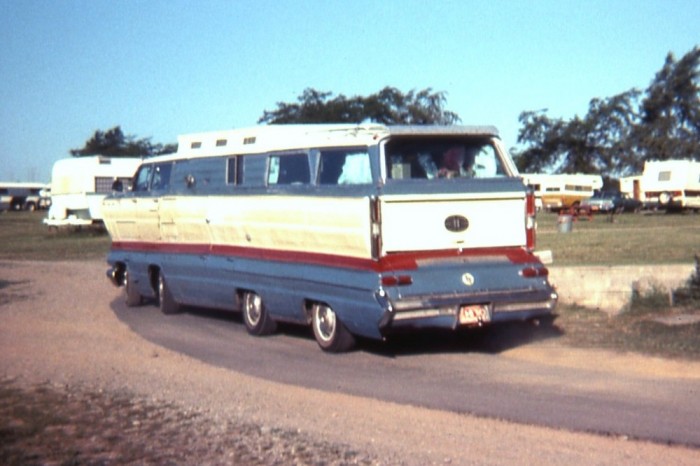 Looks like its turning circle is a bit wide. source

Dad’s creation surely brought many smiles to people’s faces. That was dad. An Irishman, with lots of sayings, he enjoyed making people smile. When asked if he would ever consider selling the ShamRockAway, he would say with that twinkle in his eye, “Probably settle for a one eyed horse and a hundred bushel of oats.”

Colleen notes that her father died in 1990, but he would love the attention the ShamRockAway is starting to get.

The ShamRockAway still exists, someone having bought it from a wrecking yard. Whether it will get restored is another question. source

« The Lost city of Nan Madol is the only known ancient city ever built on top of a coral reef
Hieroglyphs written with shark teeth from Easter Island, remain undeciphered »