Being a junk dealer means that from time to time, you will stumble upon priceless items that were deemed useless by their owners and thrown out on the street. We read about this kind of items every day on the Internet. In some instances, the “junk” may turn out to be really obscure. The items described here were found by a junk dealer in Houston in the 1960s. While wandering on the city streets, he noticed 12 old notebooks thrown on the curb, near a house that was on fire. When he opened them, he noticed that the pages were filled with mysterious double-sided, collaged watercolor drawings.

He didn’t pay much attention to the significance of the notebooks, but after some time, in 1969, Mary Jane Victor, an art history student found the in his shop. She was immediately drawn by their strangeness. Mary was a student at the University of St. Thomas in Houston. She informed her mentor, Dominique de Menil, and he bought four of the notebooks for $1,500 (a substantial amount of money for that period). The mysterious collages were then exhibited at the Rice University in Houston. 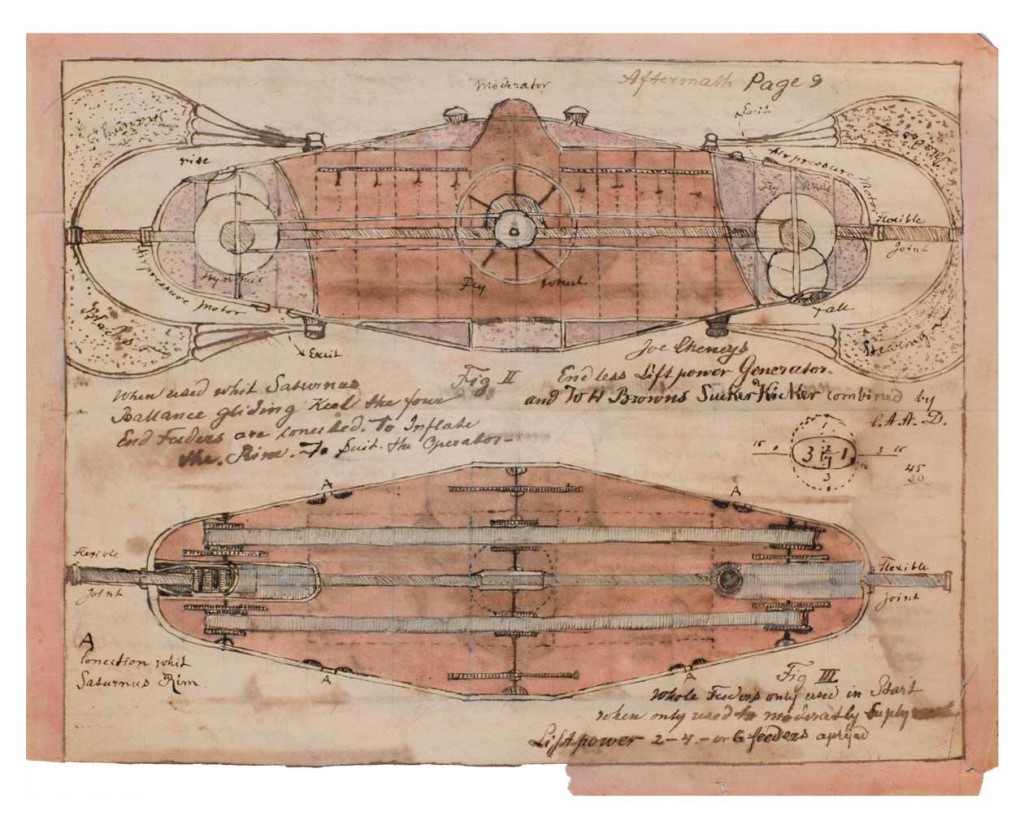 Pete Navaro, a graphic artist and a UFO writer, who saw the exhibition back then, became intrigued by the images. He was the one who bought the remaining notebooks and ended up studying them for 15 years.

It turned out that this amazing collages combined with drawings were made by a certain Charles August Albert Dellschau (1830 – 1923). Although some information about his life and his work is found, the whole story is till not explained.

Here are some facts about his life. Charles August Albert Dellschau was born on 4 June 1830 in Prussia, and died on 20 April 1923, in Texas. He was an American artist of Prussian birth. He is considered as one of the first American outsider artists. “Outsider art” is described as art created outside the boundaries of official culture, by those on the outside of the established art scene, such as psychiatric hospital patients, children, etc.

Dellschau immigrated from Brandenburg, Prussia to Texas in 1853. In 1861, he married Antonia Hilt in Richmond, Texas. He had 3 children and 1 stepdaughter with Hilt. He was a butcher by trade and also worked in his stepdaughter’s saddlery. after his retirement in 1899, he began a career as a self-taught artist. he filled at least 12 notebooks with drawings, watercolor paintings, and collages depicting fantastical airships. He lived with his stepdaughter and her husband and worked in their attic apartment in Houston, Texas.

Dellschau’s earliest known work is a diary dated 1899, and the latest is an 80-page book dated 1921-1922, giving his career as an artist a 21-year span. His work was in large part a record of the activities of the “Sonora Aero Club”, of which he was a purported member. 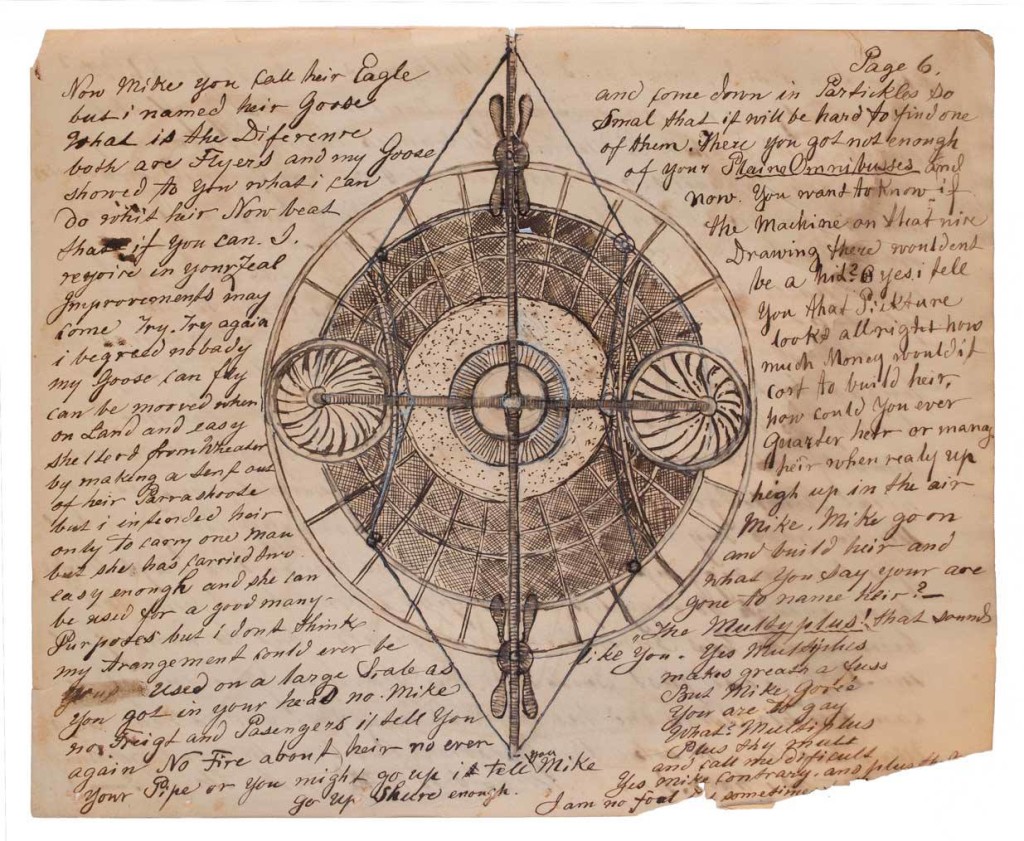 Dellschau’s writings describe the club as a secret group of flight enthusiasts who met at Sonora, California in the mid-19th century. One of the members had discovered the formula for an anti-gravity fuel he called “NB Gas.” Their mission was to design and build the first navigable aircraft using the “NB Gas” (or “Suppa”) for lift and propulsion. Dellschau called these steampunk flying machines “Aeros”. Together with the collaged watercolors, there are many newspaper clippings, wich Dellschau called “press blooms”. The clippings depict early attempts at flight. This pieces of newspapers are combined with the author’s own wild and fantastic drawings of airships and contraptions. Dellschau does not claim to be a pilot of any of the airships; he identifies himself only as a draftsman for the Sonora Aero Club. His collages incorporate newspaper clippings (called “press blooms”) of then-current news articles about aeronautical advances and disasters. 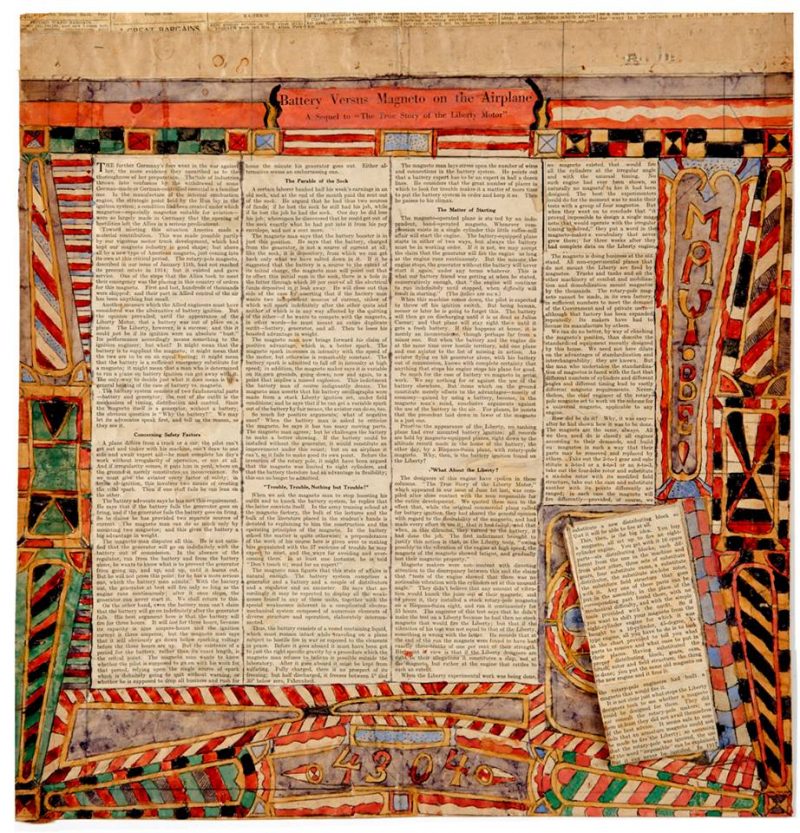 Despite exhaustive research, including searches of census records, voting rosters, and death records, nothing has been found to substantiate the existence of this group except for a few gravestones in the Columbia Cemetery where several of the surnames are found. It is speculated that the “Sonora Aero Club” is a work of fiction invented by Dellschau. Another theory made by Pete Navarro, says that a coded story is hidden throughout the drawings. Navaro thinks that Sonora Aero Club was a branch of a larger secret society known only as NYMZA. Who knows, maybe Dellschau was a witness of some strange occurrences for real. UFO sightings are not a rare thing around the Houston area (there were reports of strange objects flying even in the early 20th century). What if Dellschau had some insight into alien technology and tried to depict it as best as he could trough his drawings?

The originals of the Dellschau collages and illustrations displayed here are part of many public and private collections and have been a part of many exhibitions. They are provided here by Stephen Romano. 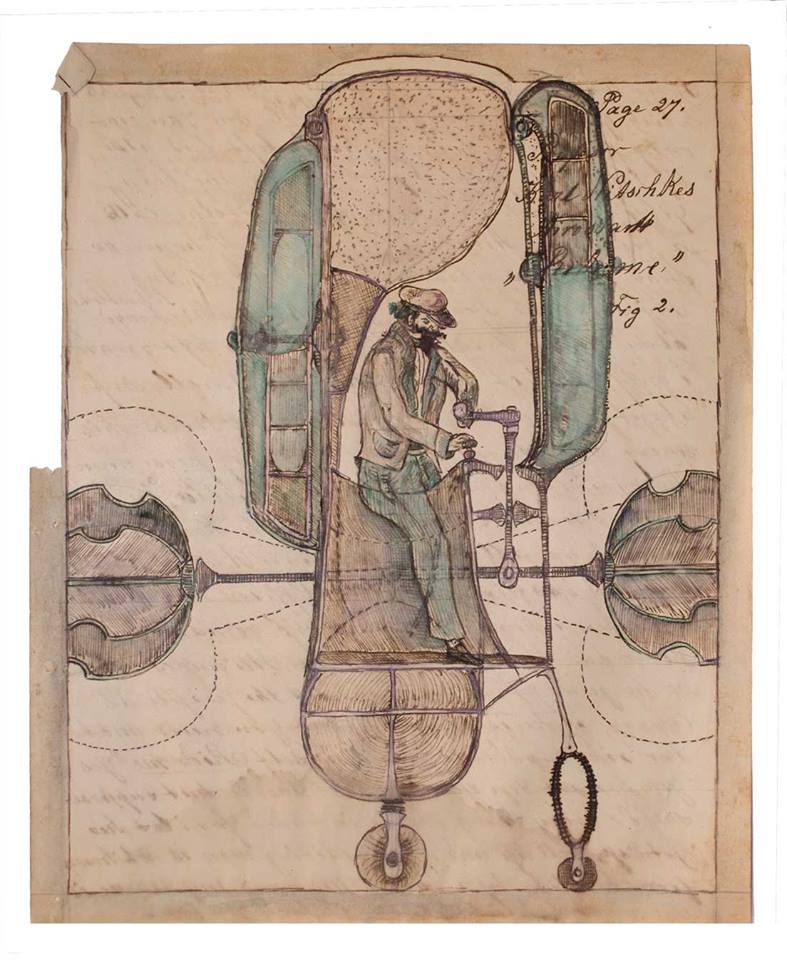 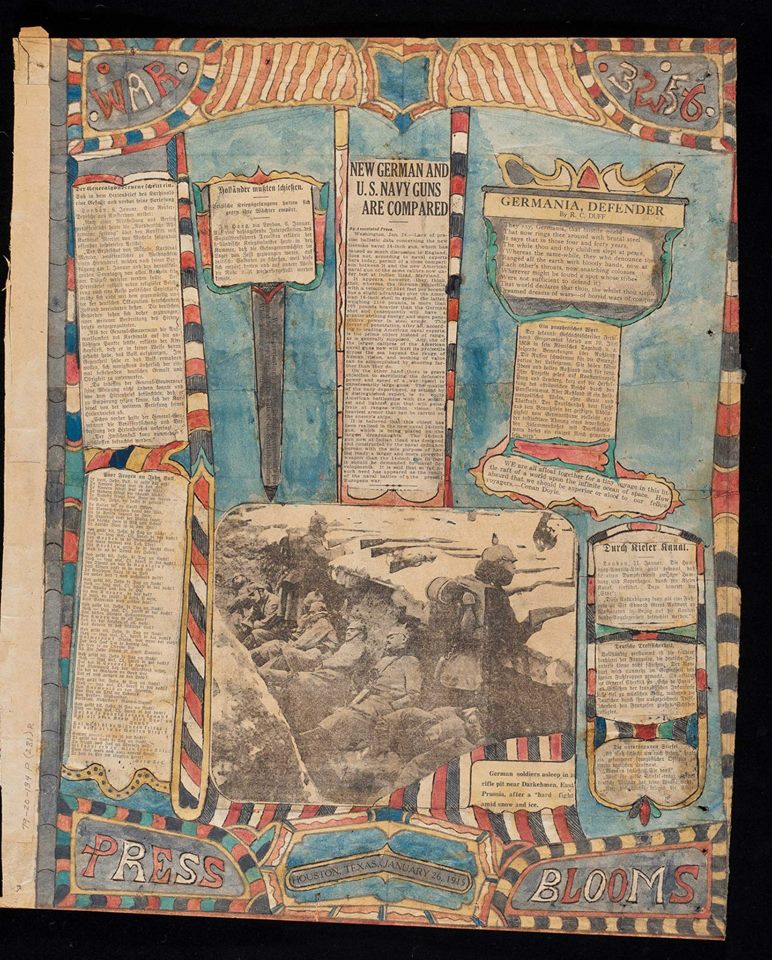 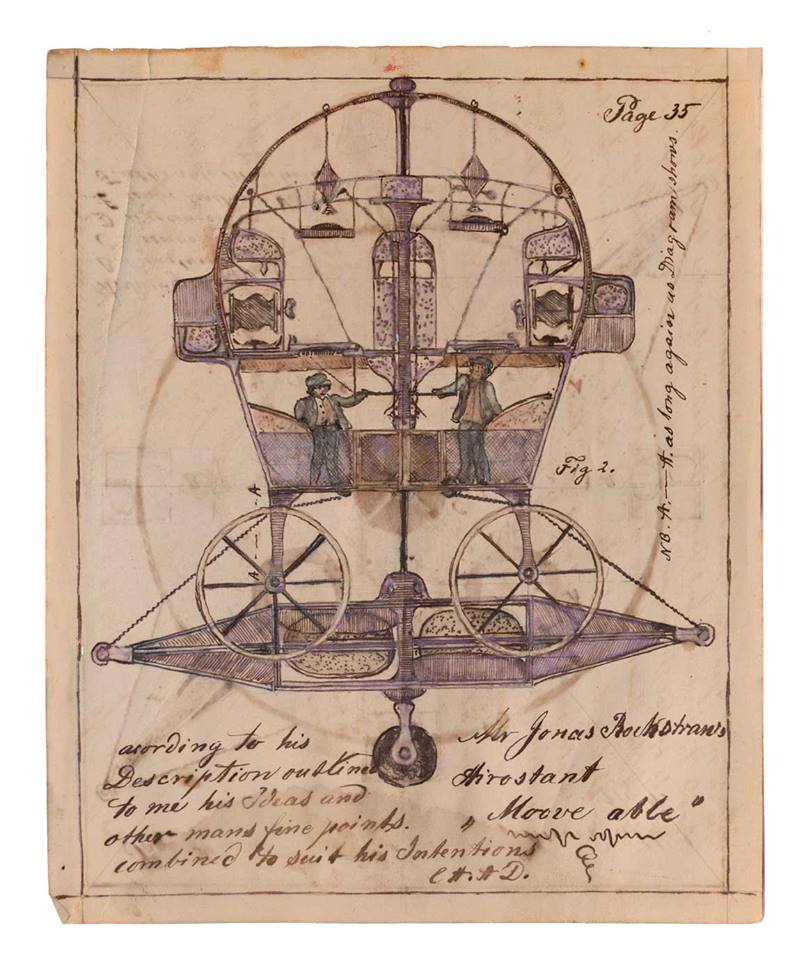 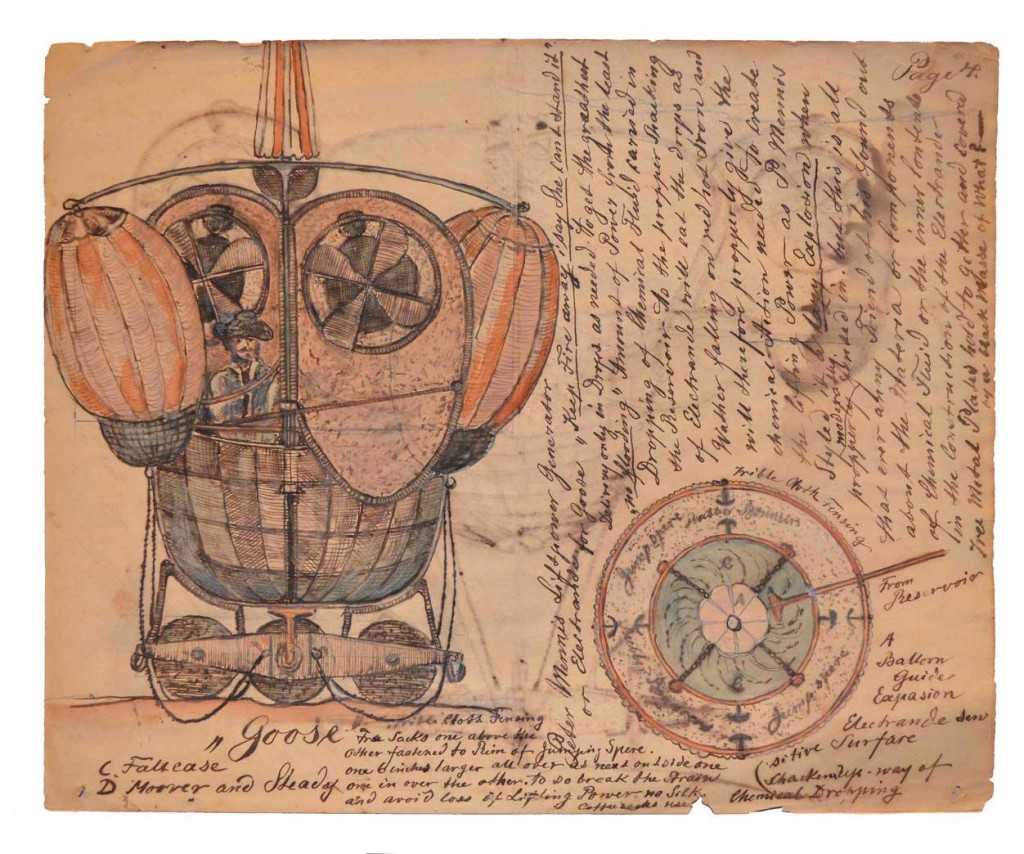 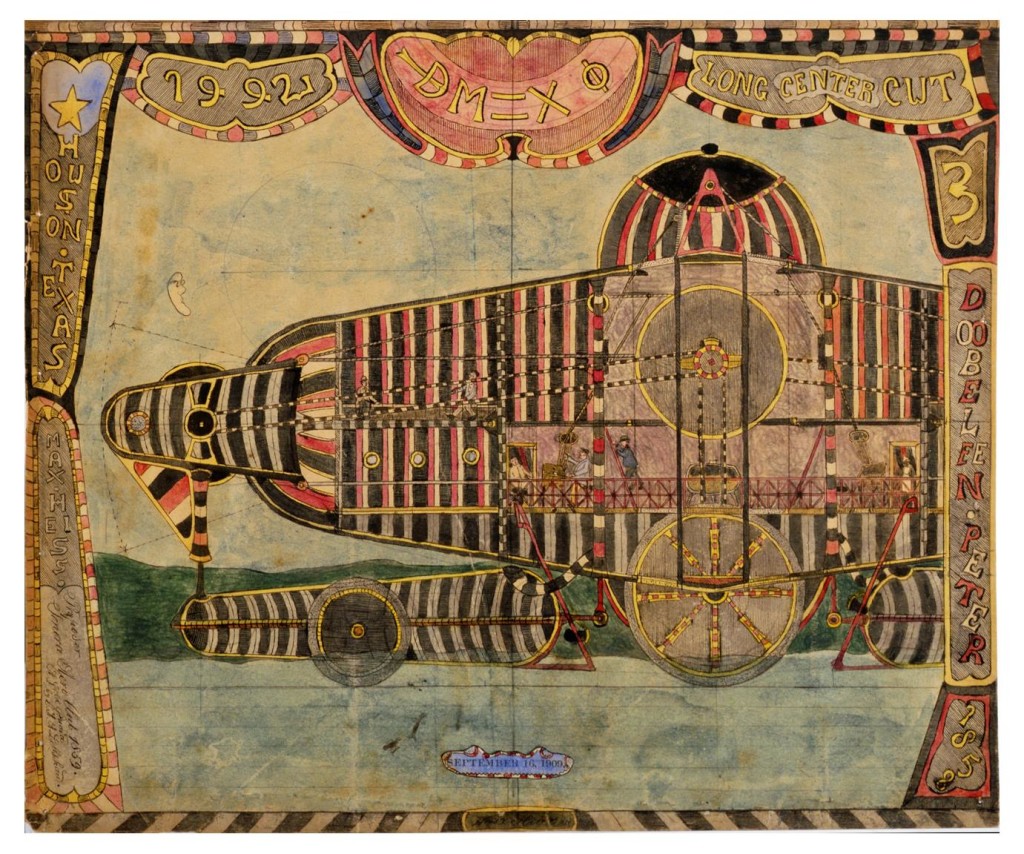 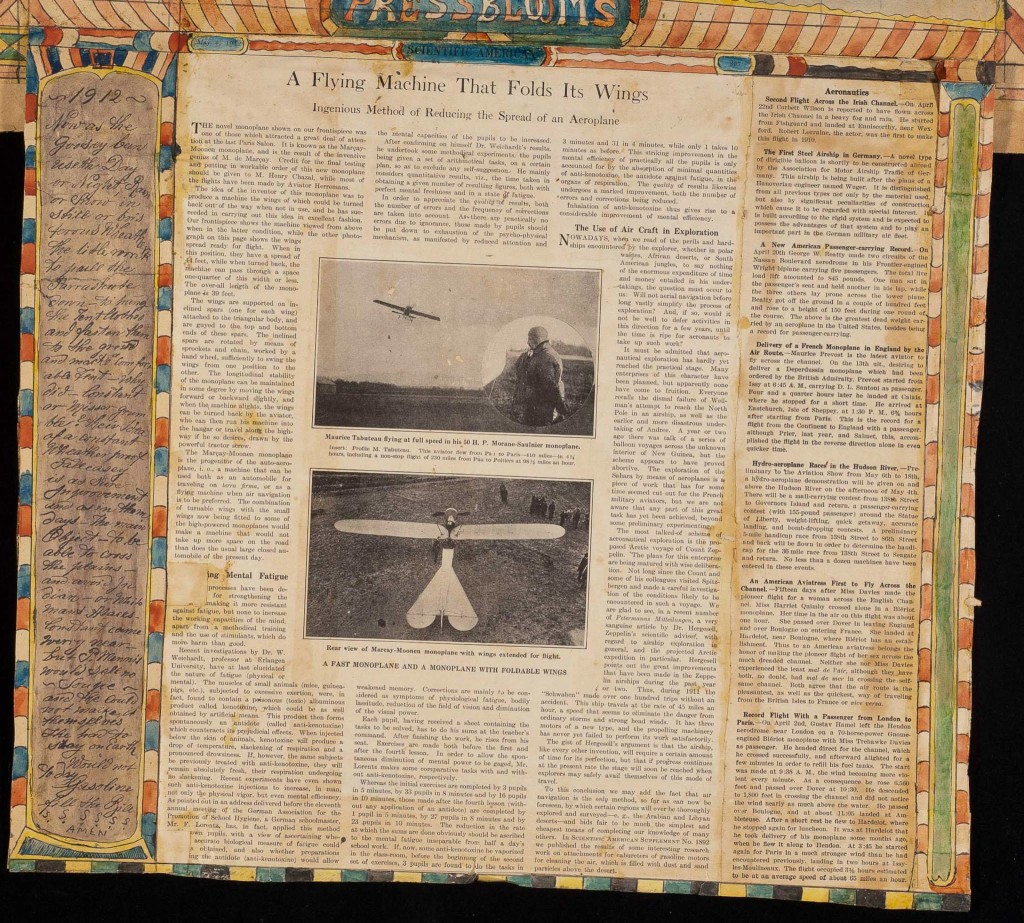 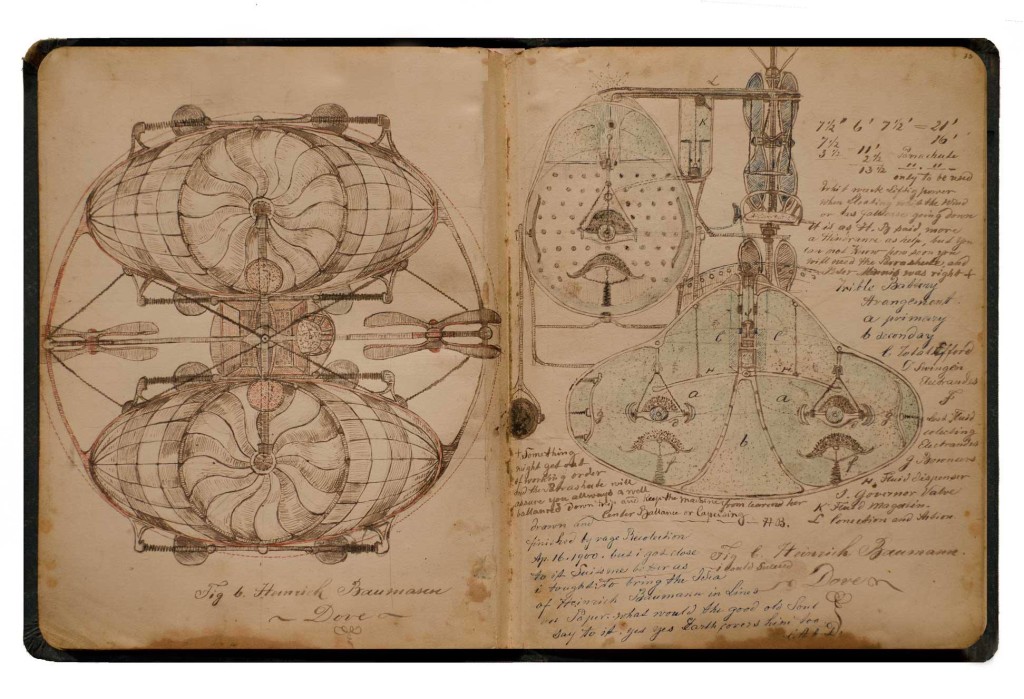 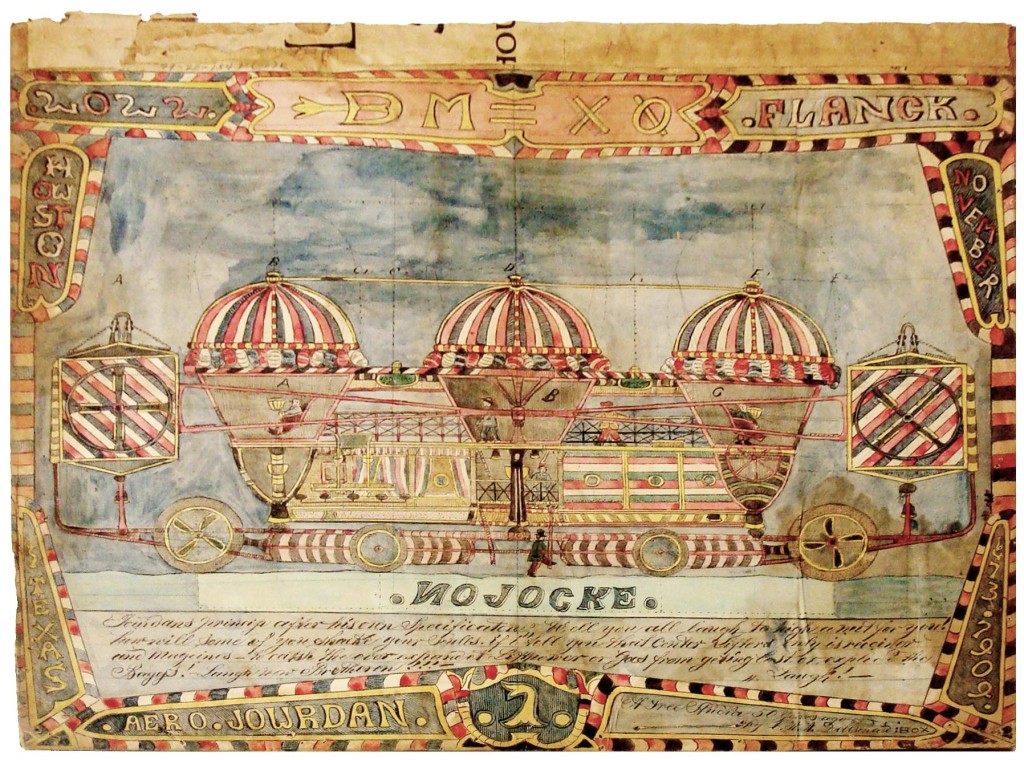 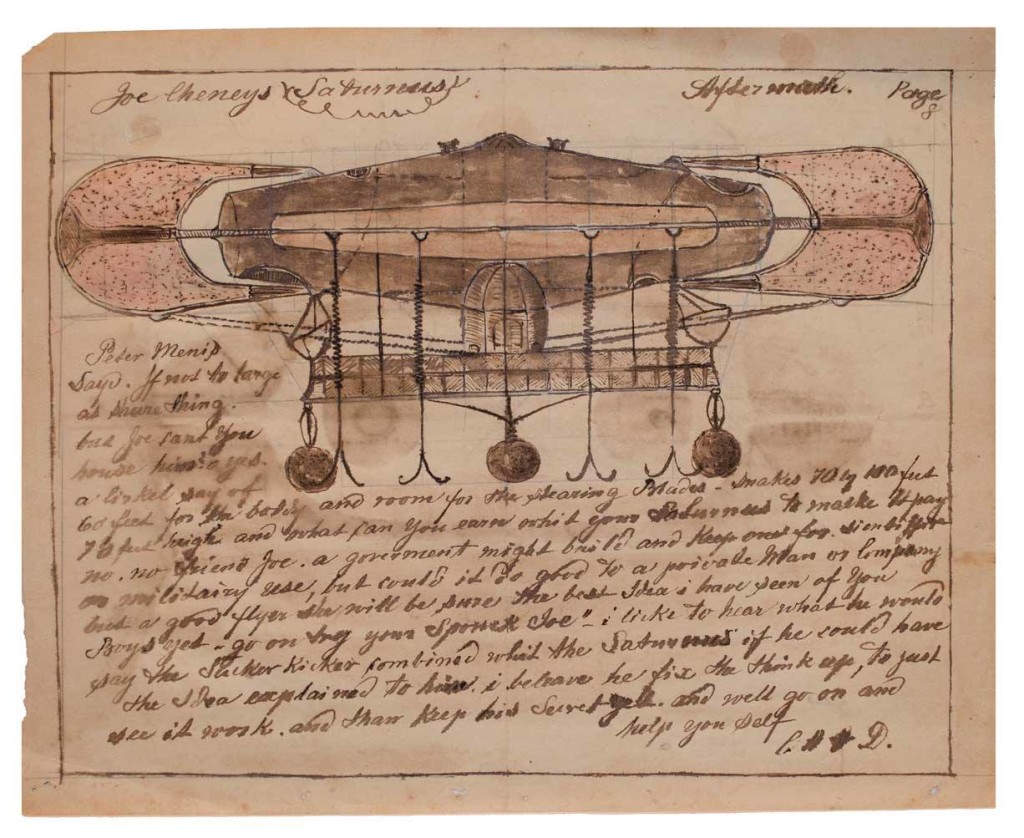 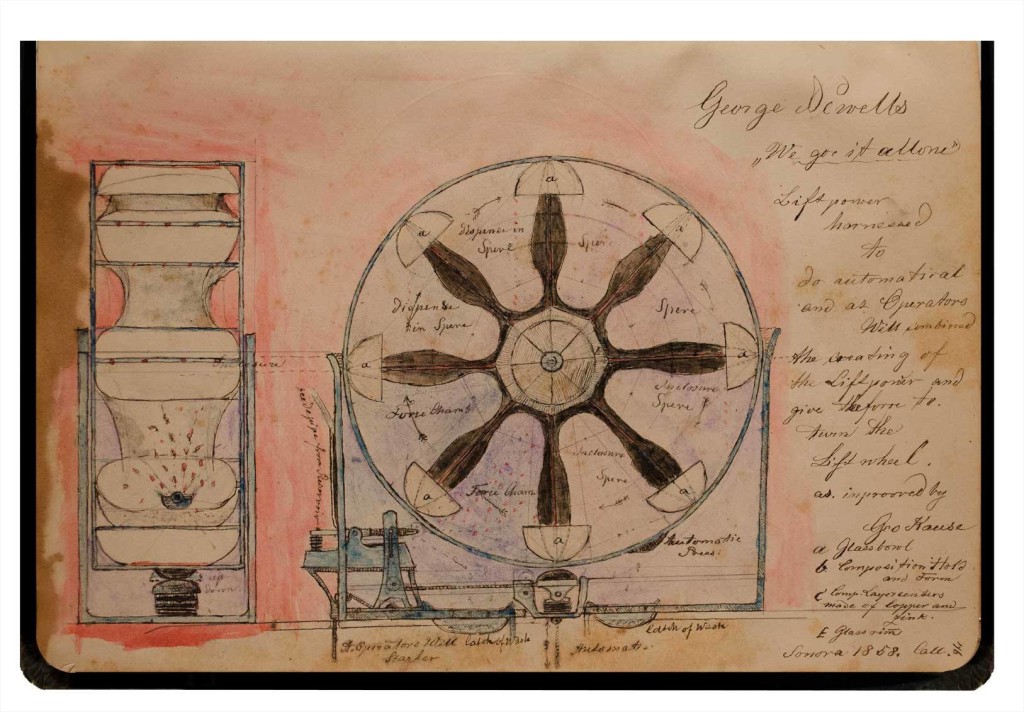 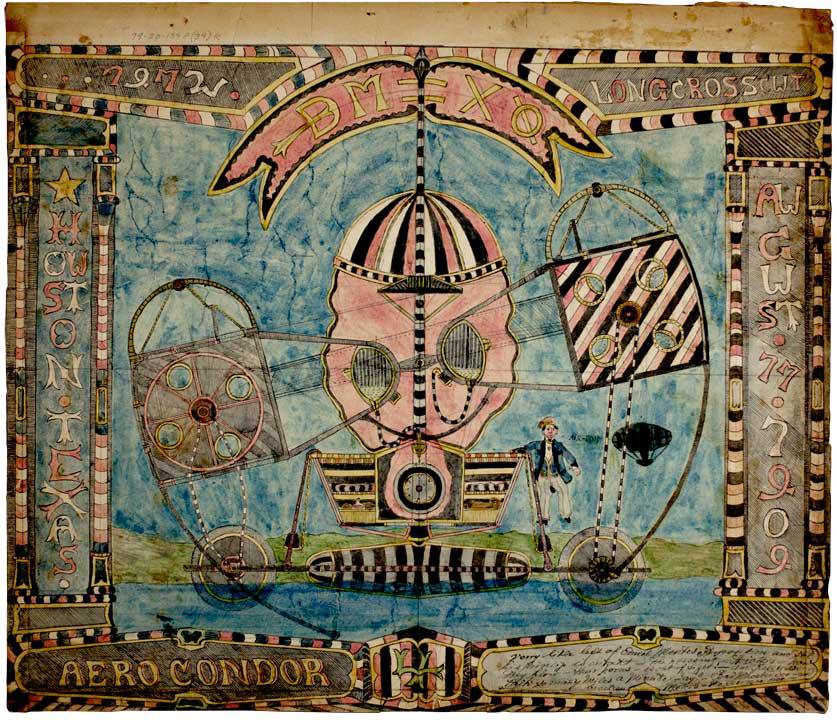 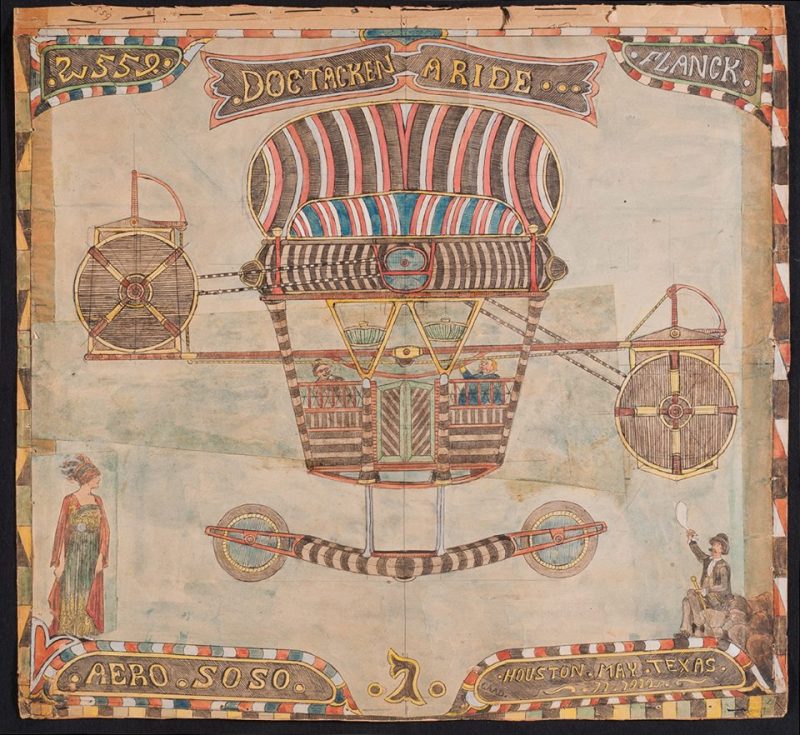 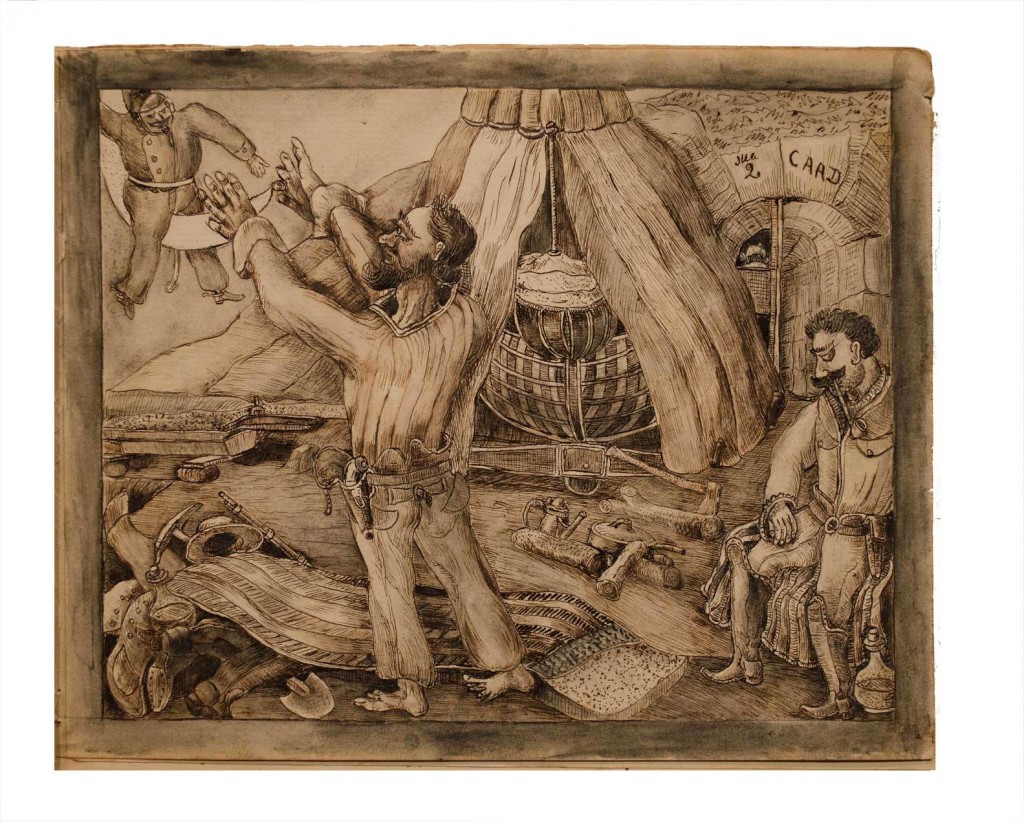 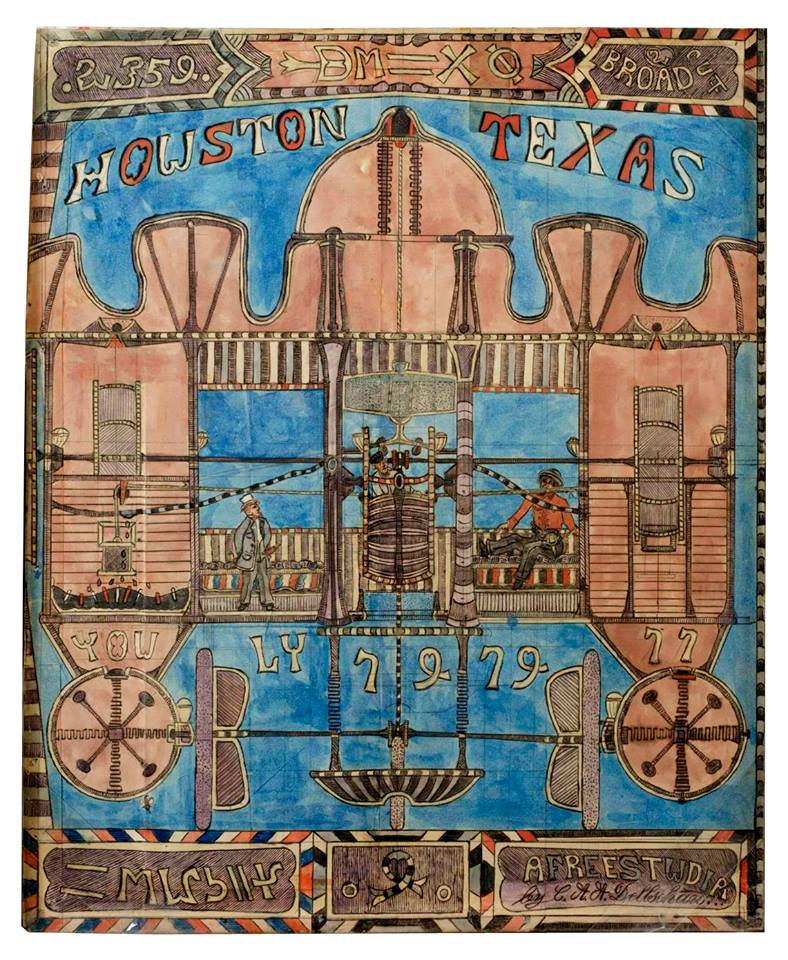 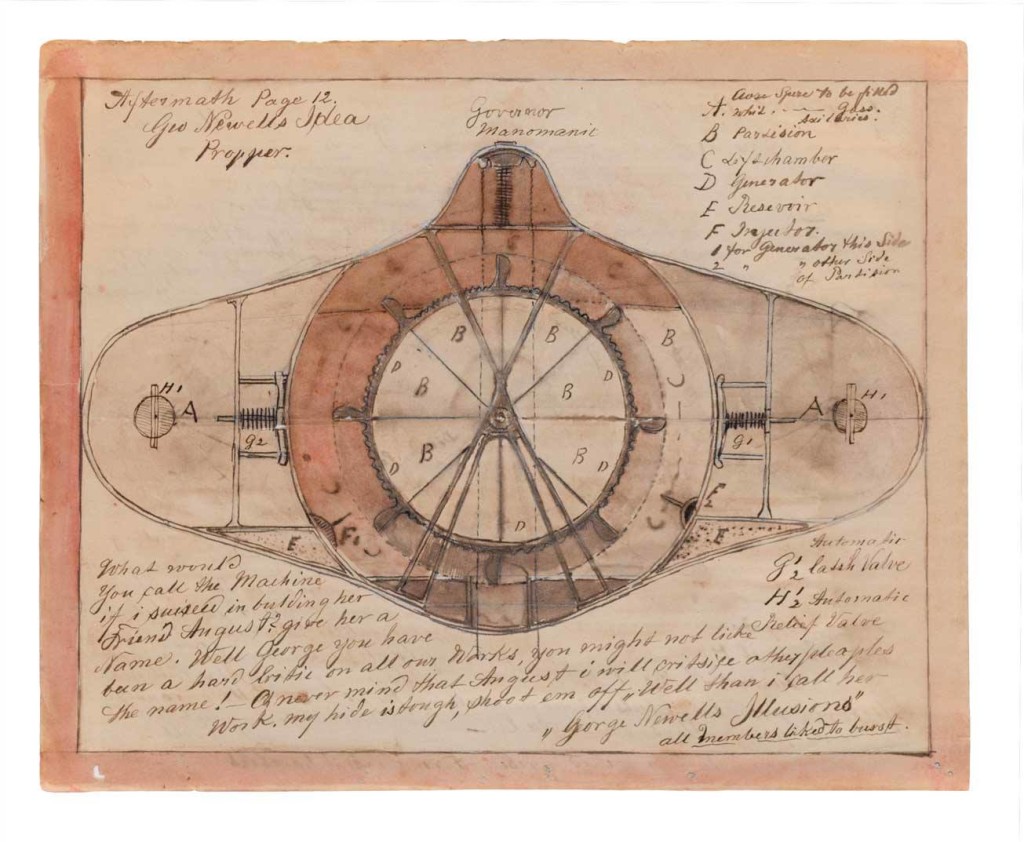 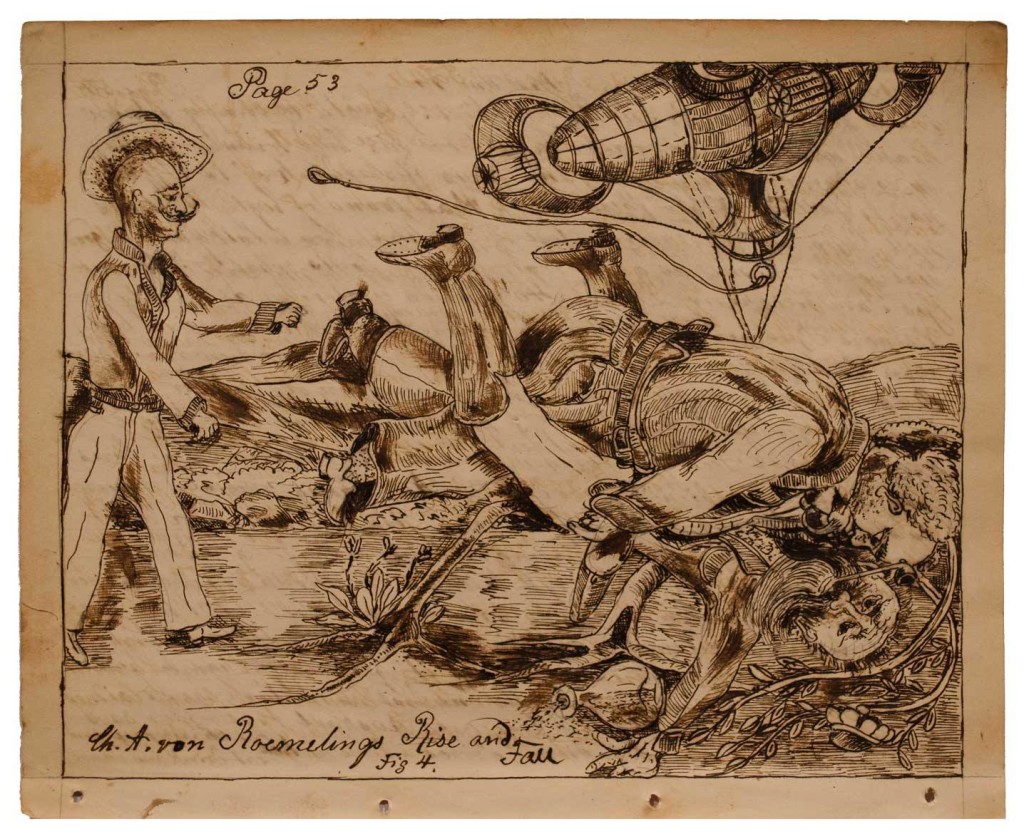 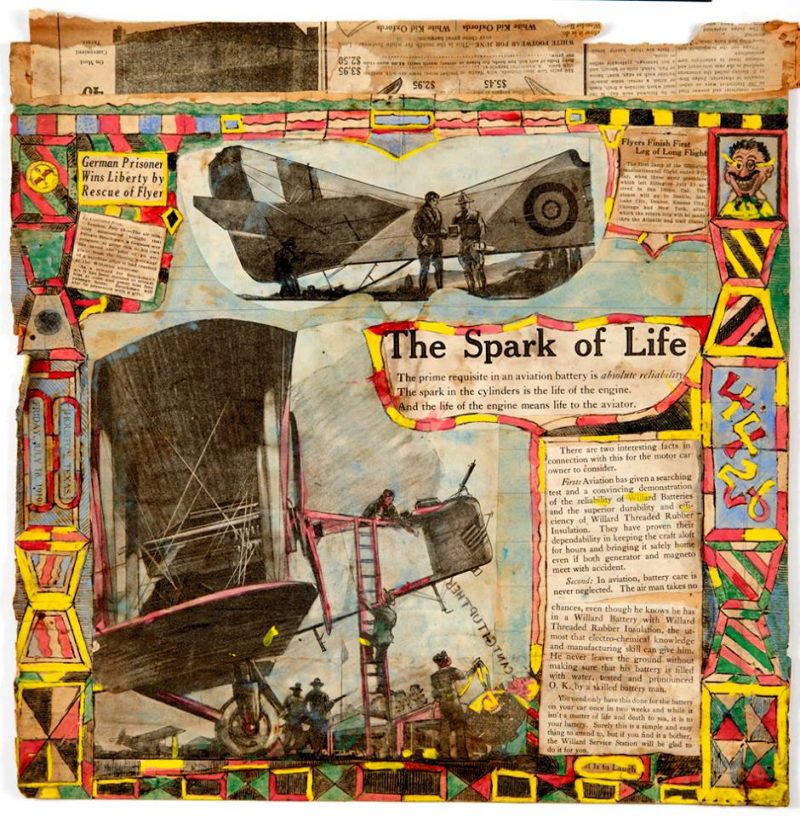 « The 1000 autographed B-17 that was sent back to the USA for War Bond tour – was bought by a garage after the war
What Happened to the Flags On The Moon? Here is the Answer… »