For all of the Star Trek lovers out there, you are going to be amazed by this story.  If you follow the link, there is a sequence of photos of the original U.S.S. Enterprise being built.  In the first photo, taken in 1964, three of the four men who originally built it pose in front of it.

For those of you who are not familiar with the men who built the model, they are Richard C. Datin Jr., Mel Keys, and Vernon Sion.  The other member, who was not pictured, is Volmer Jensen.

Over the years, the model has actually been rebuilt and restored many times.  The most recent restoration was done by the Smithsonian. 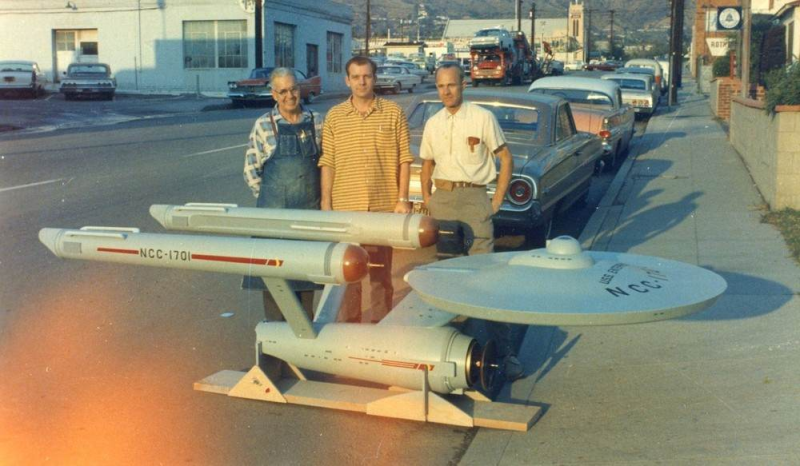 Since the TV show debuted in 1966, the 11-foot model has been re-treated three times.  The years it’s been treated were 1974, 1984, and 1992.  The most current restoration came almost 20 years after it was first built in 1992.  The process was overseen by Science Fiction Modelmaking Associates.  This company has brought out other movie props that have caused movie goers to fall in love with the items.

In 1992, the job caused controversy from the fans because of the paint that was used during the restoration.  However, the people who are restoring it now, Mike and Denise Okuda, are seeking  ideas for the new project.  They have been responsible for a lot of the scenes for the TV show.

It is safe to say that many movies have props that the public want.  However, it is nearly impossible to get your hands on one unless they are replicas.  Here are the top 10 greatest movie props of all time:

Although this movie is considered a one-man movie with very little dialogue, the most iconic scene would have to be when Tom Hanks’ character loses his only friend, Wilson, while at sea.  For those who do not know what –  or who – Wilson is, he is a volleyball that has a blood-smeared hand print on it, complete with a smiley face.

One of the volleyballs used in the film went for $18,400 at an auction.  The ball became so iconic that the Wilson Company sells replicas.

Although it is an older film, Robbie the Robot has appeared in dozens of other films, TV shows, cartoons, toys, and even model versions.

When the model originally posed for the poster in her fur bikini in the 1960s, she became an icon.  Then, when the poster was used in this movie, to hide the escape-hole in the jail cell, she and the poster became icons all over again.

For those who have not seen this movie, you probably seem lost with a prop as simple as this.  However, you’re going to have to watch it in order to figure out the plot point in which this certain prop is used.

The prop was originally used to conjure demons.  However, it has made the careers of the two actors.  The book is used in all three movies and it is also seen in Jason Goes to Hell: The Final Friday.

In the movie, Charlie Chaplin is so hungry he eats his shoe.  The original was made entirely out of black licorice.

If you haven’t seen this movie, the videotape is the most important part of the storyline.  So no wonder people want the videotape for themselves.

In the movie, a Coke bottle is dropped from an airplane onto an African tribe that previously had no contact with modern society.

If you haven’t seen this, again, there will be no spoilers.  However, let’s just say that it is a major part in the film and anyone who has seen it will give you quite the reaction.

Even though the film was made almost 80 years ago, the tool to make Frankenstein come alive is still known today as the ultimate “evil scientist” instrument.

« Barnenez in France is a Neolithic monument dating to 4800 BC, and is considered as one of the oldest building in the world
Taken in 1894, this is the oldest known footage of Native American drumming and “The Ghost Dance” »