This rare and old footage shows the Shotokan Karate self-defense

Shotokan is a style of karate, developed from various martial arts by Gichin Funakoshi (1868–1957) and his son Gigo (Yoshitaka) Funakoshi (1906–1945). Gichin was born in Okinawa[1] and is widely credited with popularizing “karate do” through a series of public demonstrations, and by promoting the development of university karate clubs, including those at Keio,Waseda, Hitotsubashi (Shodai), Takushoku, Chuo, Gakushuin, and Hosei.

Funakoshi had many students at university clubs and outside dojos, who continued to teach karate after his death in 1957. However, internal disagreements (in particular the notion that competition is contrary to the essence of karate) led to the creation of different organisations—including an initial split between the Japan Karate Association (headed by Masatoshi Nakayama) and the Shotokai (headed by Motonobu Hironishi and Shigeru Egami), followed by many others—so that today there is no single “Shotokan school”, although they all bear Funakoshi’s influence. 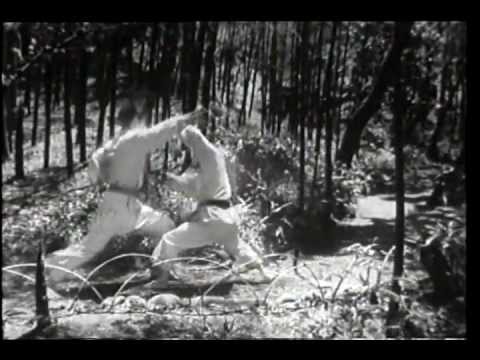 Shotokan training is usually divided into three parts: kihon (basics), kata (forms or patterns of moves), and kumite (sparring). Techniques in kihon and kata are characterised by deep, long stances that provide stability, enable powerful movements, and strengthen the legs. Shotokan is regarded as a dynamic martial art as it develops anaerobic, powerful techniques as well as developing speed. Initially strength and power are demonstrated instead of slower, more flowing motions. Those who progress to brown and black belt level develop a much more fluid style that incorporates grappling, throwing and some standing joint locking jiu-jitsu-like techniques, which can be found even in basic kata. Kumite (fighting) techniques are practised in the kihon and kata and developed from basic to advanced levels with an opponent.

Gichin Funakoshi laid out the Twenty Precepts of Karate, which form the foundations of the art, before some of his students established the JKA. Within these twenty principles, based heavily on Bushido and Zen, lies the philosophy of Shotokan. The principles allude to notions of humility, respect, compassion, patience, and both an inward and outward calmness. It was Funakoshi’s belief that through karate practice and observation of these 20 principles, the karateka would improve as a person.

The Dojo kun lists five philosophical rules for training in the dojo; seek perfection of character, be faithful, endeavor to excel, respect others, refrain from violent behaviour. These rules are called the Five Maxims of Karate. The Dojo kun is usually posted on a wall in the dojo, and some shotokan clubs recite the Dojo kun at the beginning and/or end of each class to provide motivation and a context for further training.

Funakoshi also wrote: “The ultimate aim of Karate lies not in victory or defeat, but in the perfection of the character of the participant” .

« Hitler believed that he trained dogs to talk during the war; they learned poetry too
These color photos taken in 1949 show the beauty of the Netherlands in the post WW2-era »