War is hell. Wars caused death and destruction on a scale unknown in human history. While the human cost of the war is, of course, paramount, the loss of property and with it, the cultural heritage of nations must also be considered. No wonder then that we need memorials to remind us of the terrible cost of doing so. Across the world, buildings that were practically destroyed by bombs or blasted by atomic weapons still stand as monuments to conflicts gone by.  Poignant and heartbreaking, they serve as a stark reminder of lives tragically lost. These ten examples of preserved, bombed-out buildings stand, many as stabilized ruins, in stark contrast to their successors and as testaments to a war that forever changed the world we live in. 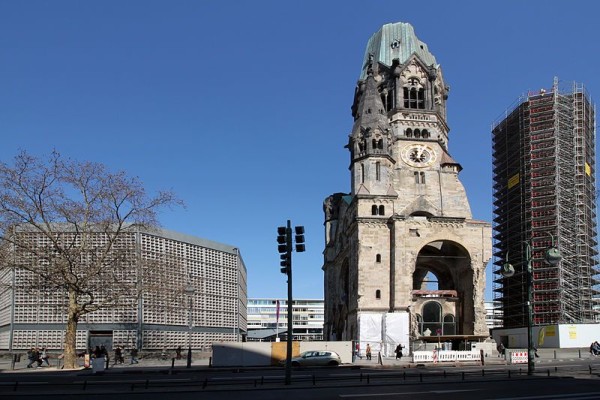 As the power center of Nazi Germany, Berlin was bombed heavily in the final 2 years of the war. Very few of its major buildings have survived not only the fall of the Third Reich but the difficult transition to first a divided city and now, once again, a great European capital. The Kaiser Wilhelm Memorial Church was originally constructed from 1891 to 1906 and was severely damaged in an Allied bombing raid on November 23rd of 1943. The preserved spire of the old church now rests alongside a modernist New Church built between 1959 and 1963. 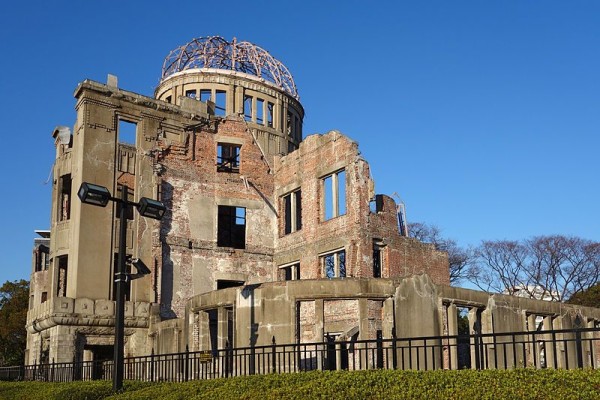 Hiroshima Peace Memorial, commonly called the Atomic Bomb Dome or Genbaku Dōmu , in Hiroshima, Japan, is part of the Hiroshima Peace Memorial Park and was designated a UNESCO World Heritage Site in 1996. The ruin serves as a memorial to the people who were killed in the atomic bombing of Hiroshima on 6 August 1945. Over 70,000 people were killed instantly, and another 70,000 suffered fatal injuries from the radiation. 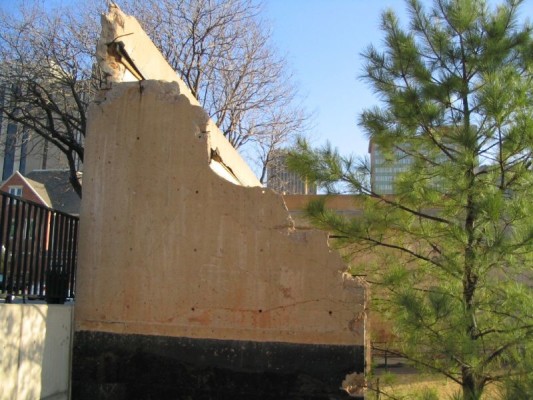 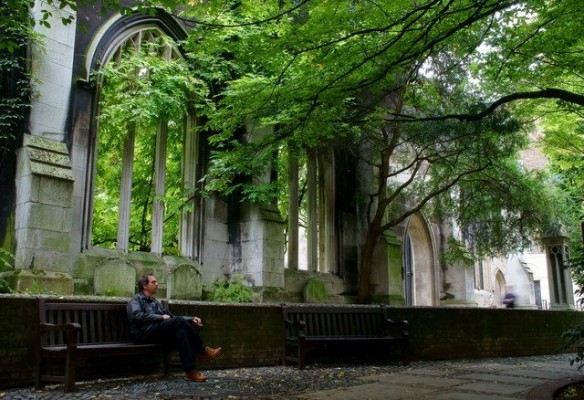 St Dunstan-in-the-East was a Church of England parish church on St Dunstan’s Hill, half way between London Bridge and the Tower of London in the City of London. The church was largely destroyed in the Second World War and the ruins are now a public garden. Seen in 2015, the ruined church is almost lost under vines and greenery. Baskets of flowers hang from the ceiling. Grass happily grows through the floors. It’s a place not only for reflection, but for reading a book, or watching the world go by, or any of the million things you can do in a peaceful society. In its own way, that may be the most powerful argument for peace that’s ever been put forward. 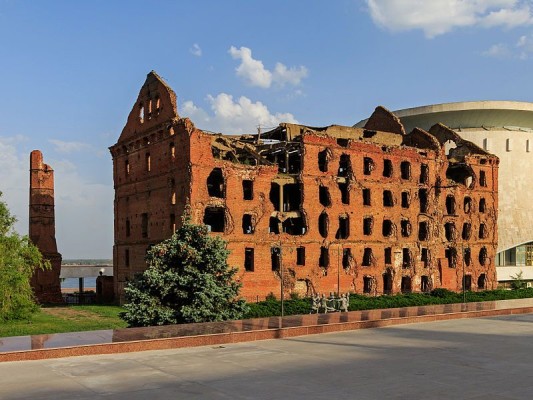 Built by a trio of ethnic-German brothers in the 19th century, the Hergert Mill was one of the only buildings to survive the exceptionally vicious Battle of Stalingrad which raged from August 1942 through February 1943. Today, the mill is preserved alongside the Panorama Museum which houses relics and resources relating to the battle – including the sniper rifle used by Vasily Zaytsev.

6. The Bombed Buildings of Belgrade (Serbia) 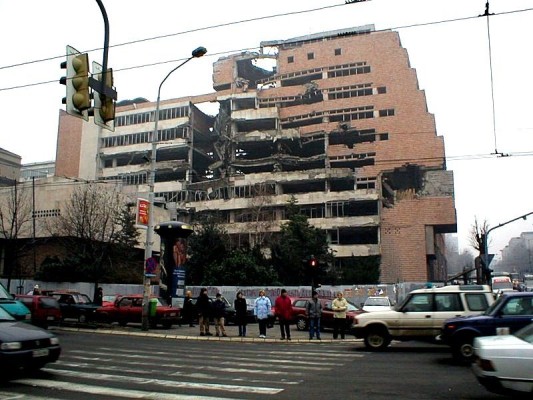 In 1999, the final Balkan War took place between Serbia (backed by Montenegro) and the breakaway province of Kosovo. Fuelled by fears of genocide and harsh memories of the war in Bosnia, NATO stepped in with a bombing campaign. For two months, rockets fell on Serbia. The capital of Belgrade was badly hit. Civilian buildings such as the TV Station were targeted, resulting in widespread loss of life. By the end, over 500 civilians were dead. Despite letting the buildings stand, the Serbian government has not officially converted any into memorials. While some Serbs treat them as such, this is generally discouraged by the city. Nonetheless, it’s hard to escape the feeling that the entire city is now a kind of living memorial park.

7. Museum of Arms from the Homeland War (Croatia) 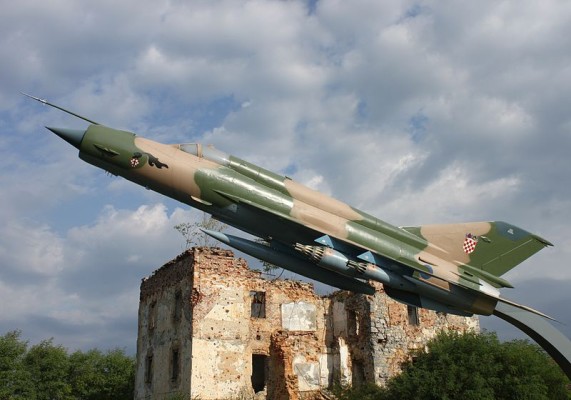 Museum of Arms from the Homeland War (Croatia). source

The Croatian War of Independence was fought from 1991 to 1995 between Croat forces loyal to the government of Croatia, which had declared independence from the Socialist Federal Republic of Yugoslavia (SFRY), and the Serb-controlled Yugoslav People’s Army (JNA) and local Serb forces, with the JNA ending its combat operations in Croatia by 1992. In Croatia, the war is primarily referred to as the Homeland War and also as the Greater-Serbian aggression. In Serbian sources, War in Croatia  is the most commonly used public term. Constructed around an old Austro-Hungarian barracks that was catastrophically shelled in the 1991 war, the Museum of Arms is now a somewhat belligerent memorial. Yet it also serves as a reminder of all the civilians killed in the slow disintegration of Yugoslavia, no matter what side of the various ethnic divides they were born on.

The Murambi Technical School, now known as the Murambi Genocide Memorial Centre, is situated in the Murambi district in southern Rwanda. It was the site of a massacre during the 1994 Rwandan genocide. When the killings started, Tutsis in the region tried to hide at a local church. However, the bishop and mayor lured them into a trap by sending them to the technical school, claiming that French troops would protect them there. On April 16, 1994, some 65,000 Tutsis ran to the school. After the victims were told to gather there, water was cut off and no food was available so that the people were too weak to resist. After defending themselves for a few days using stones, the Tutsi were overrun on April 21. The French soldiers disappeared and the school was attacked by Hutu Interahamwe militiamen. Some 45,000 Tutsi were murdered at the school, and almost all of those who managed to escape were killed the next day when they tried to hide in a nearby church. According to the guide at the memorial, the French brought in heavy equipment to dig several pits where many thousands of bodies were placed. They then placed a volleyball court over the mass graves in an attempt to hide what happened. Among the bodies currently displayed are many children and infants.

The school building is now a genocide museum exhibiting the skeletons and mummified bodies of some of the thousands of people killed there. 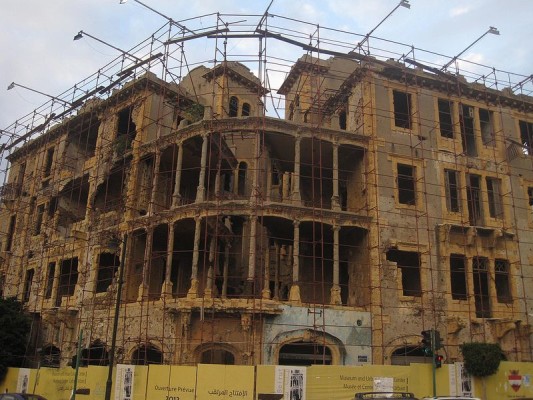 Beit Beirut (literally “the house of Beirut”) is a museum and urban cultural center that was scheduled to open in 2013 in Beirut’s Ashrafieh neighborhood. The cultural center is in the restored Barakat building, also known as the “Yellow house”, a historic landmark designed by Youssef Aftimus. A grand old building built in 1924, the Yellow House once epitomized the city’s multicultural existence. Then the civil war came. Lying directly on the Green Line that separated the warring Christian and Muslim factions, the building became the epicentre of some of the fiercest fighting. Alternately bombed, shot and used as a snipers’ nest, it was nearly flattened under a barrage of constant gunfire. After the war finally ended, it was left to rot. A broken, burnt-out wreck harking back to more brutal times. 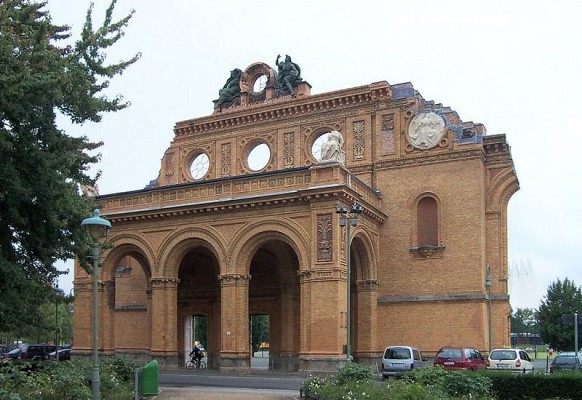 The Anhalter Bahnhof is a former railway terminus in Berlin, Germany, approximately 600 metres (0.5 mi) southeast of Potsdamer Platz. Once one of Berlin’s most important railway stations, it was severely damaged in World War II, and finally closed for traffic in 1952, when the GDR-owned Deutsche Reichsbahn rerouted all railway traffic between Berlin and places in the GDR avoiding the West Berlin area. The station’s name lives on in the Berlin S-Bahn station of the same name, opened in October 1939 as part of the North-South S-Bahn link.

« Vintage war machine: The “Bazooka Vespa”
Incredibly, this is the oldest surviving footage of Native Americans »