In the 1800’s, freak shows were quite popular. A freak show was like a circus, except the performers were all “freaks” or outcasts. These persons finally had a purpose in life, and earned money for each show they did. Nowadays, there aren’t that many who still perform.

In 1870 there was a photographer named Charles Eisenmann in New York who would take photos of the locals – couples, families, and high society. While he made good money doing those photos, he had an almost sick fascination and obsession with capturing the most bizarre and unusual people.

Today, people would be ostracized for putting together this type of traveling show; accused of exploiting people who have disabilities. However, in the 1800’s, people would pay top dollar to stare at these unfortunate performers. 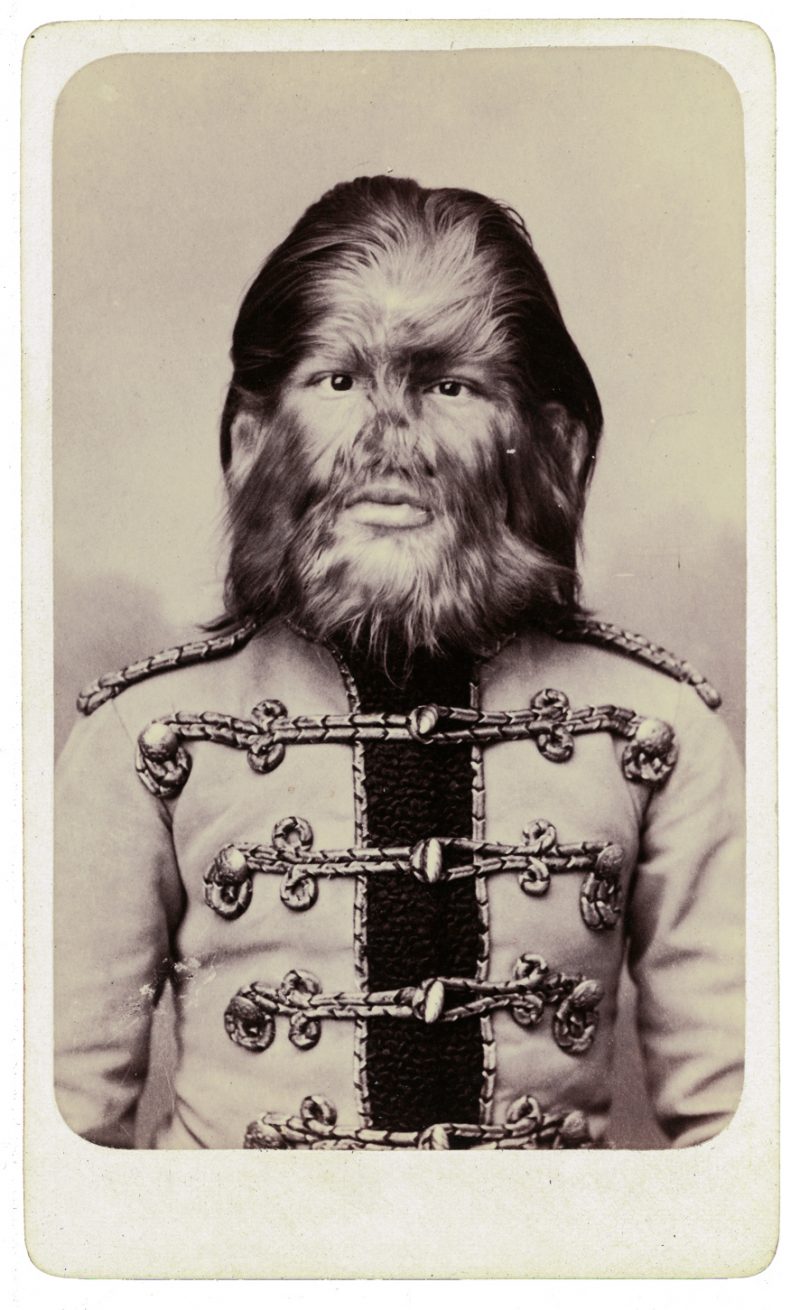 The first photo is of what looks like a werewolf. He has fur all over his face, with just his eyes, ears, and mouth left uncovered. Under the fur, he is just a normal man. In fact, he is dressed in nice clothing for his photos with Eisenmann. He called himself JoJo the Russian Dog Face Boy. He was considered one of the most successful performers, and his portrait is very famous. 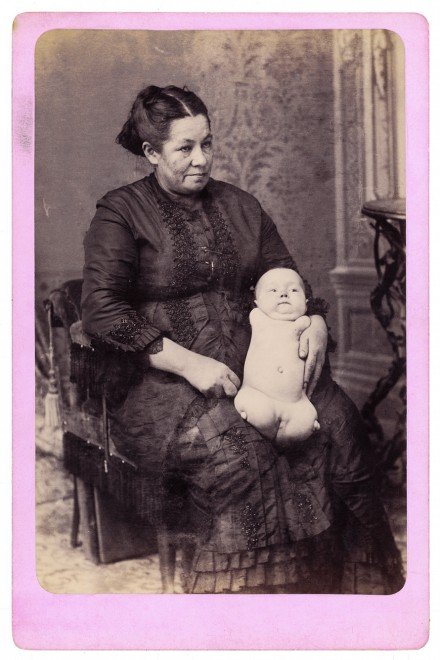 The next photo is of a “normal” looking woman holding a child. This child, however, has no arms and no legs and is naked in the photo, which makes it stick out against the mother’s black dress. The child was otherwise normally developed. 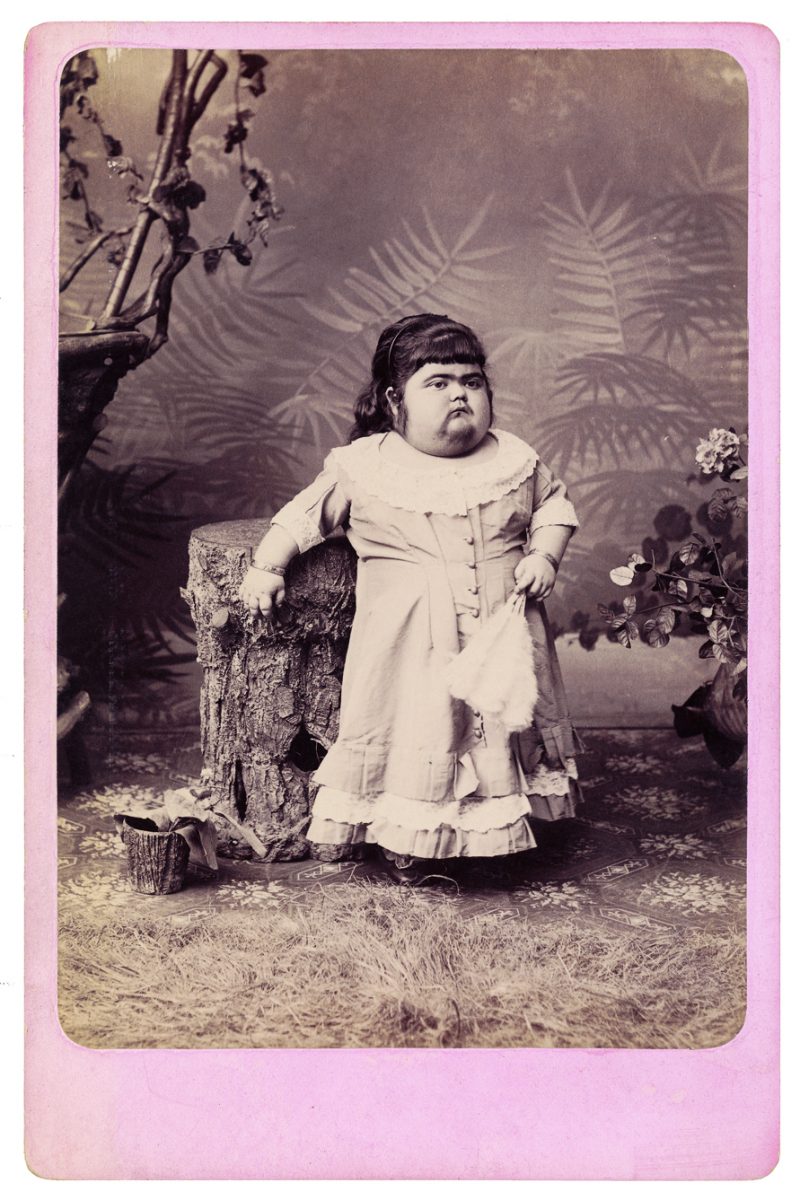 The third photo is of a “fat” dwarf woman standing next to a tree stump to give a better
understanding of her size. Her name was Sophia Schultz and sometime during the 1800’s, she started growing a little bit of facial hair. To gain popularity with the crowds, she was known to ‘pencil ‘the hair in to make it more prominent. 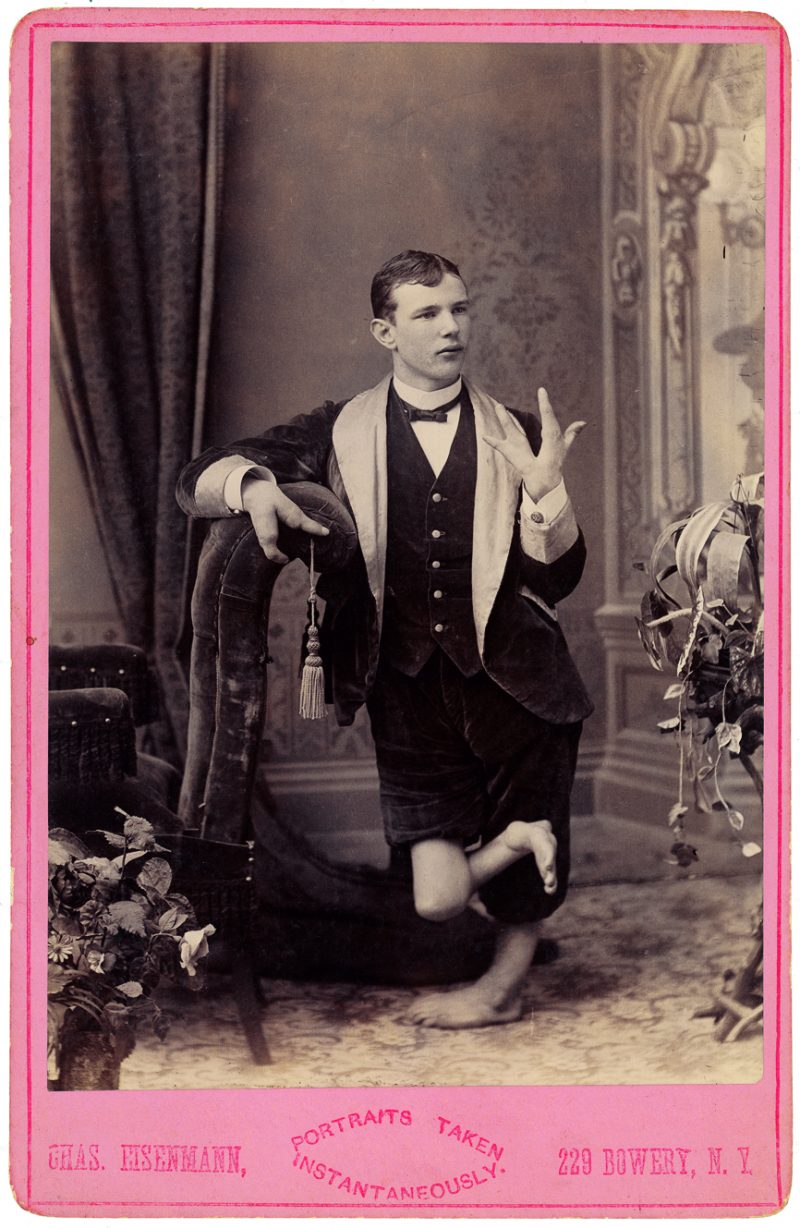 The fourth photo is of a young man otherwise known as “Lobster Boy.” His hands never fully developed, leaving two claw-like fingers on each; as well, he had a deformed right leg. Apart from that, he appears to be “normal.” 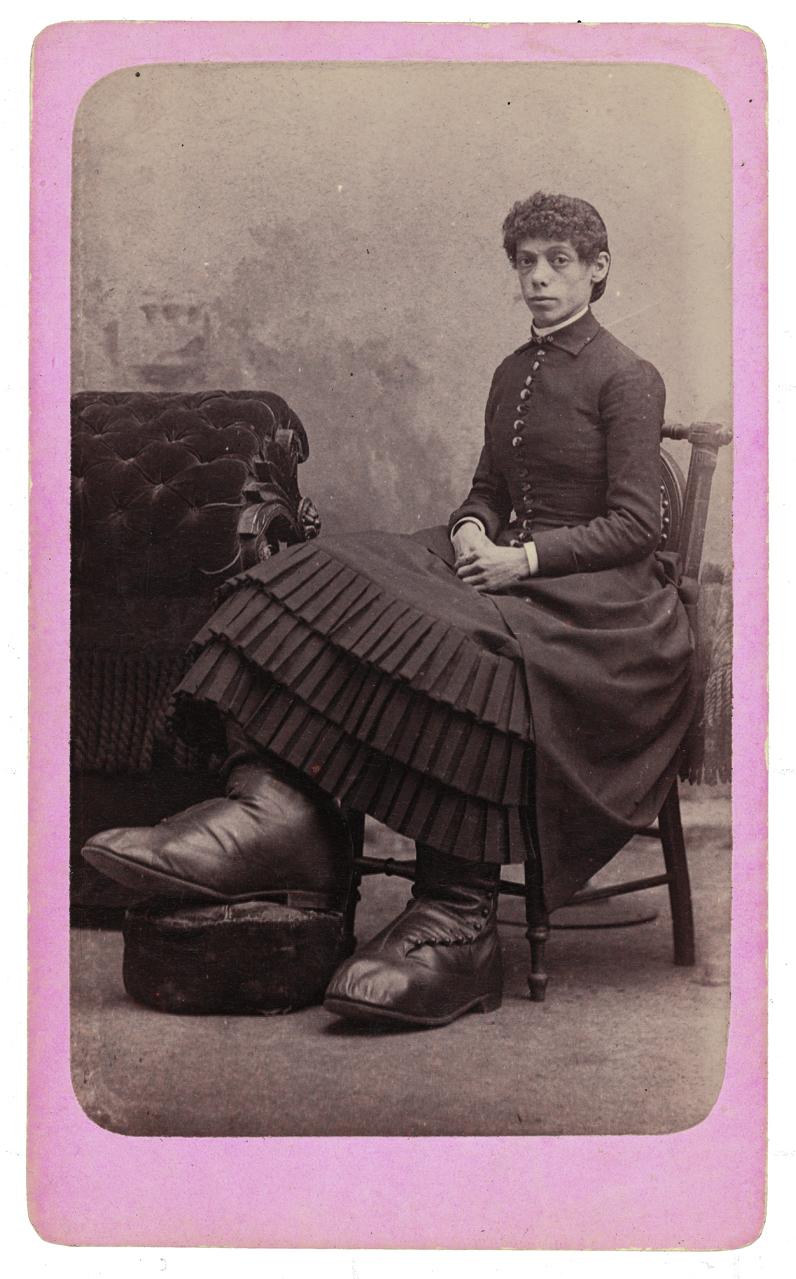 A fifth photo shows a woman who appears to have enlarged feet perhaps 50 times the size of “normal” feet. Aside from that, she appears to be an ordinary woman. Her name was Fanny Mills and she had a dowry of $5,000 cash and a successful farm, should any man want to marry her. She came from Ohio and lived with her father. He was desperate to marry her off, but it is not known whether or not any man married her. 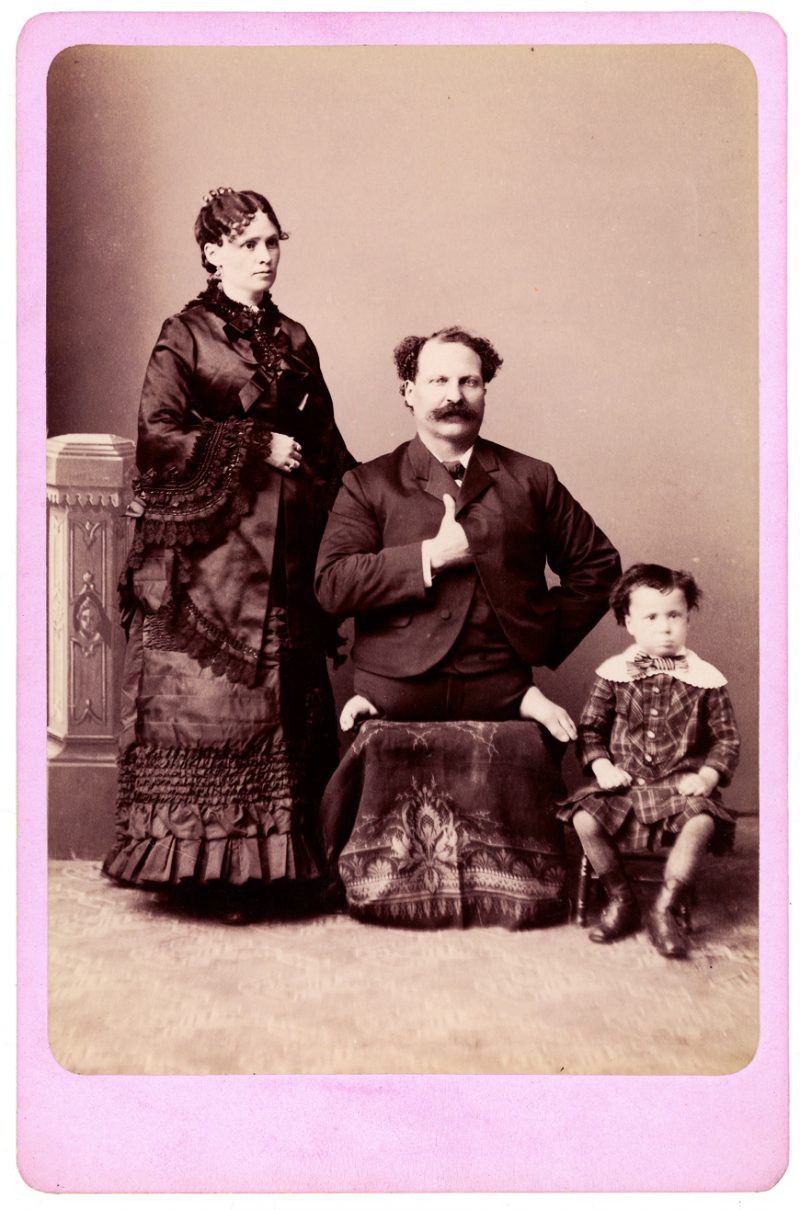 A sixth photo shows a family – mother, father, and their little boy. The mother and boy appear to be normal, however the father does not have any legs, most likely from a birth defect. Eisenmann did a very good job with the family photo – the family appears very happy, as if it was their first time ever getting their photo taken. The man was Eli Bowen; his deformity was seen as a talent, not a disability. 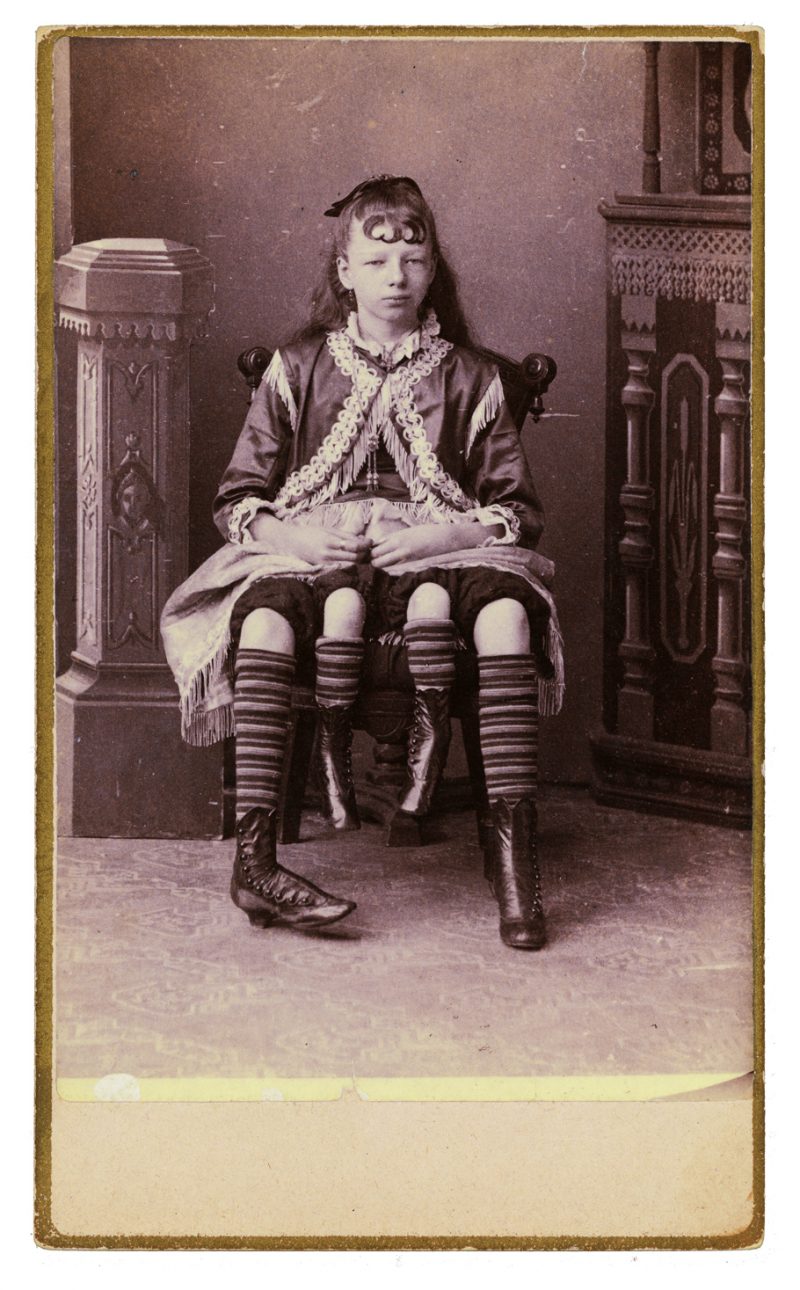 The seventh photo shows a young girl, perhaps somewhere between the ages of nine to twelve, sitting in a chair. At first she appears normal until you notice she has an extra pair of malformed legs. Between her “good” legs, she has two smaller pairs of legs. With long enough skirts, no one could see her deformity if she didn’t want it seen. Her name was Myrtle Corbin. When she married, she was able to have children successfully, considering she had two separate vaginas. She bore two children in one vagina and three in the other.