New York is a city that constantly is being rebuilt. In the late 19th and the beginning of the 20th-century dozens od magnificent, old  buildings were demolished to make room for new, modern development. However, in 1966, with the passage of the National Historic Preservation Act,  the old, historic building are protected by federal law.

Below there is a list of some really beautiful, old buildings that  were part of what is now a forgotten New York. 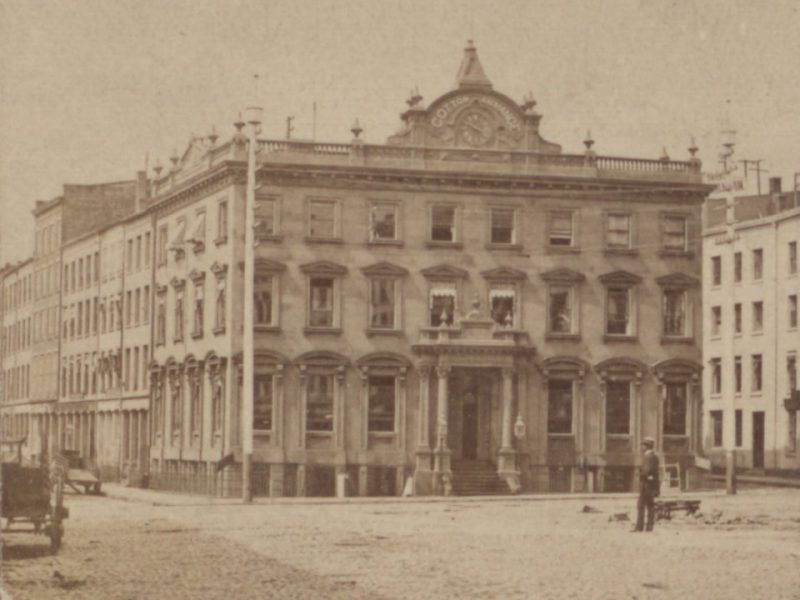 The Cotton Exchange Building was completed in 1885 in Hanover Square. It later became the India House, a private club. 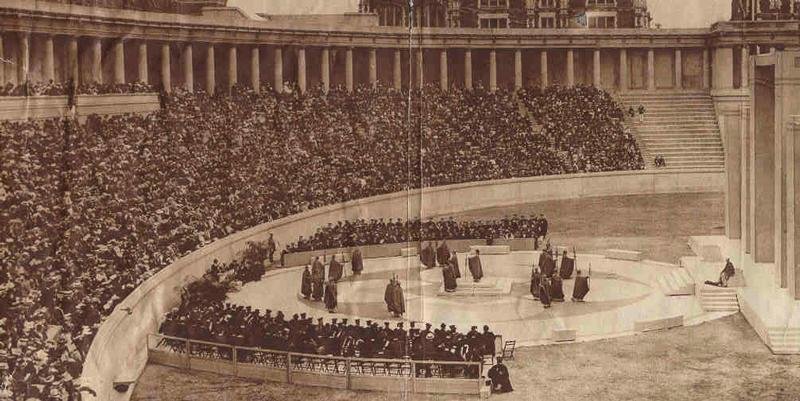 The Doric-colonnaded amphitheater was built between Amsterdam and Convent Avenues, from 136th to 138th Streets, in 1915, with a capacity of 8,000.Financier and philanthropist Adolph Lewisohn donated the money for construction. The stadium hosted many athletic, musical, and theatrical events and was one of New York’s public landmarks. It was demolished in 1973 to make way for the $125 million North Academic Center. 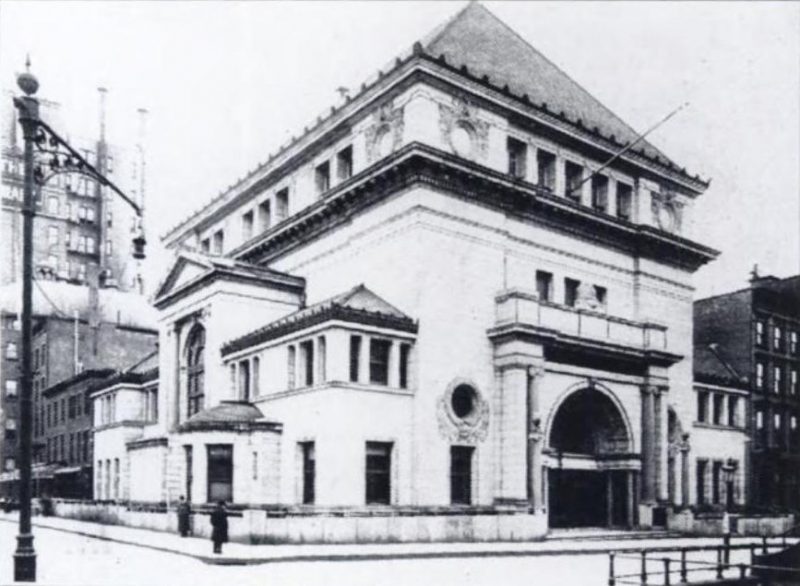 The Brooklyn Savings Bank was established as an institution in 1827. It originally operated from the basement of the Apprentices’ Library Building at the corner of Cranberry and Henry Streets, Brooklyn. In 1847, the Bank moved to new premises at the juncture of Fulton, Concord and Liberty Streets. After the opening of the Brooklyn Bridge in 1883 however, the city fathers decided to build a “grand avenue” leading to the approach of the bridge, and as the resulting plans entailed demolition of part of the Brooklyn Savings Bank in Liberty Street, the Bank’s directors resolved to move to a new location. 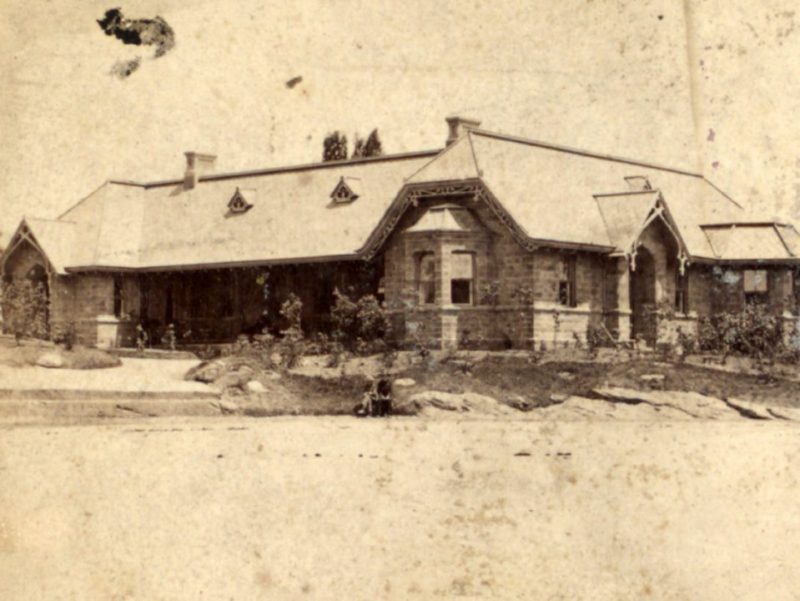 The Central Park Casino, originally the Ladies Refreshment Salon, was a restaurant near East 72nd Street, in Central Park in New York City. The name of the building came from the Italian for “little house”; the Casino itself was not a gambling business. Built in 1864, the restaurant was once intended for unaccompanied female visitors to Central Park, but was soon patronized by both men and women. While the building that housed the Casino belonged to the City of New York, the City often leased the Casino to independent operators. Mayor Jimmy Walker exercised this power in 1929 by terminating the lease of C.F. Zittel, allowing Walker’s friend, Sidney Solomon, to transform the Casino into one of New York’s most expensive nightclubs.Besides entertaining elite guests in the restaurant, Walker had an office in the Casino and conducted city administration there while meeting with political cronies. 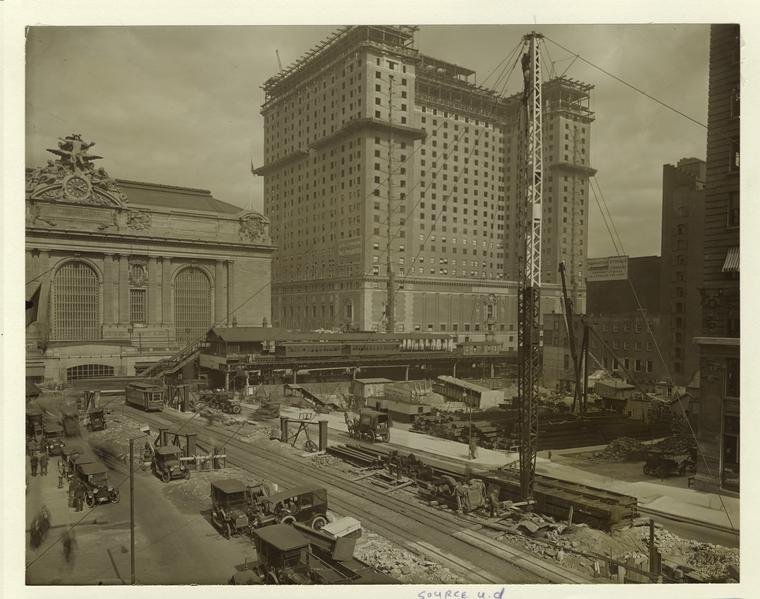 It was originally built and opened on January 28, 1919, as The Commodore Hotel, but was completely rebuilt and modernized in 1980 and now is known as The Grand Hyatt New York. 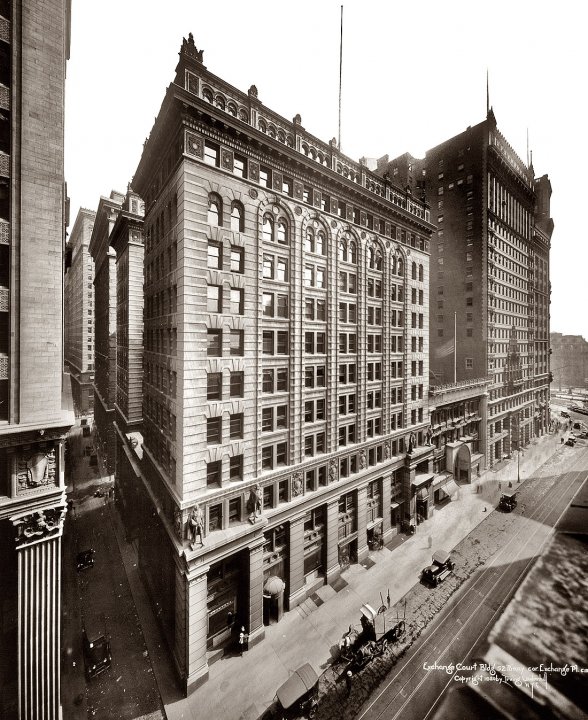 The Exchange Court Building in lower Manhattan was erected in 1898. In 1980, it was converted to a modern office building. 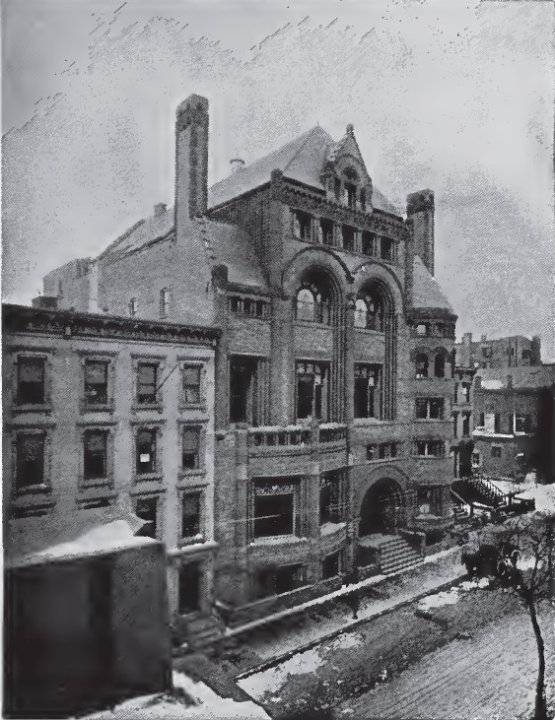 The Germania Club House was a notable building located in Brooklyn, New York.Designed by Frank Freeman and completed in 1890, it was considered one of Brooklyn’s finest examples of Romanesque Revival architecture. It was demolished in the 1920s to make way for a subway. 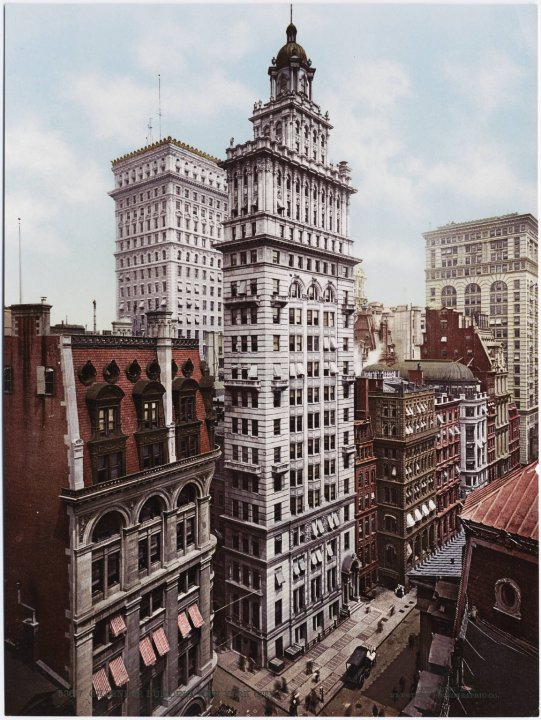 The Gillender Building was an early 20-story skyscraper in the Financial District of Manhattan in New York City. It stood on the northwest corner of Wall Street and Nassau Street, on a narrow strip of land along Nassau Street measuring only 26 by 73 feet (7.9 m × 22.3 m) At the time of its completion in 1897, the 273 feet (83 m) tall Gillender Building was, depending on ranking methods, the fourth or the eighth tallest structure in New York.

The Gillender Building was praised as an engineering novelty, and was quoted by some as “one of the wonders of the city”. It attracted attention for a visible disproportion of height and footprint which commanded a relatively low rentable area and was deemed economically obsolete from the start.

After thirteen years of uneventful existence, Gillender Building was sold in December 1909 for a record price of $822 per square foot of land, and was demolished in April–June 1910 to make way for the 41–story Bankers Trust tower at 14 Wall Street. The New York Times called demolition of the Gillender Building the first time when a modern skyscraper was torn down to be replaced with a taller and larger one. It briefly held the title of the tallest building ever demolished voluntarily. 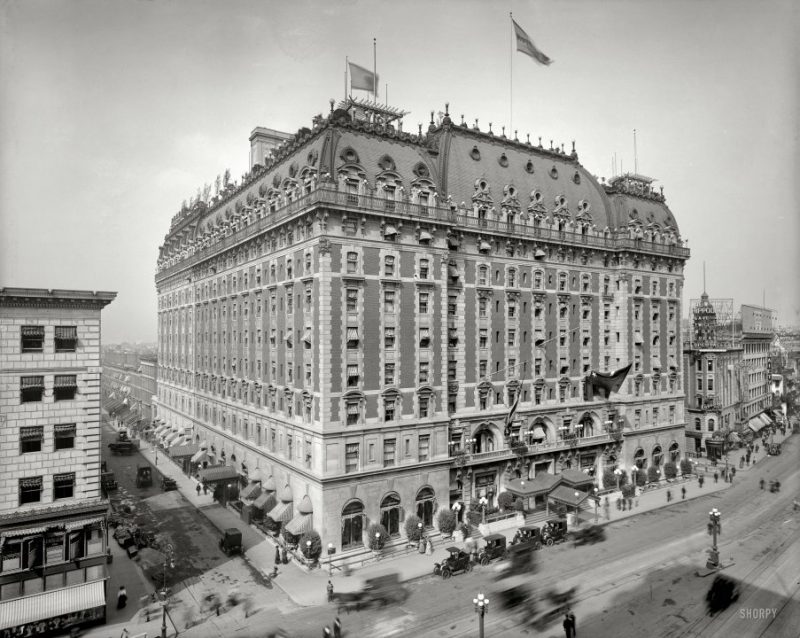 Hotel Astor was a hotel located in the Times Square area of Manhattan, New York City, in operation from 1904 through 1967. The former site of the hotel, the block bounded by Broadway, Astor Plaza, West 44th Street, and West 45th Street, is now occupied by the high-rise 54-story office tower One Astor Plaza. 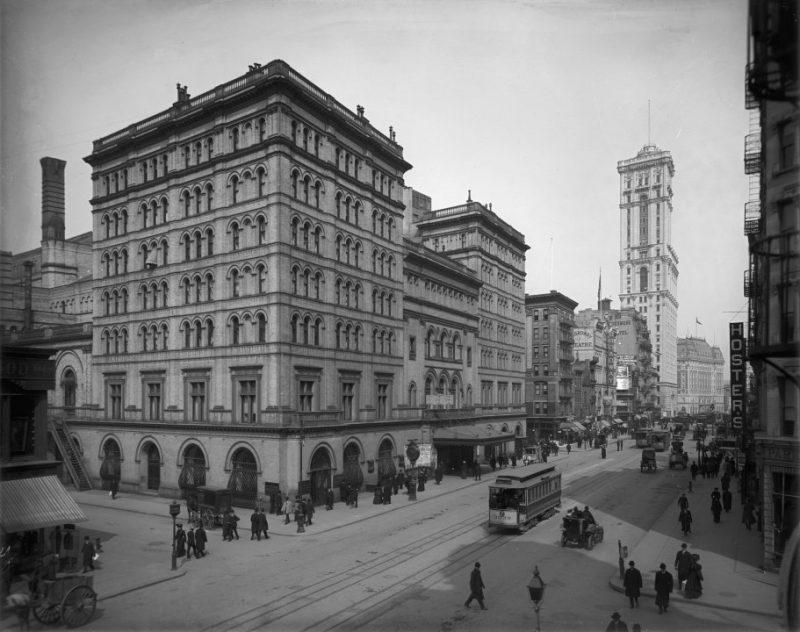 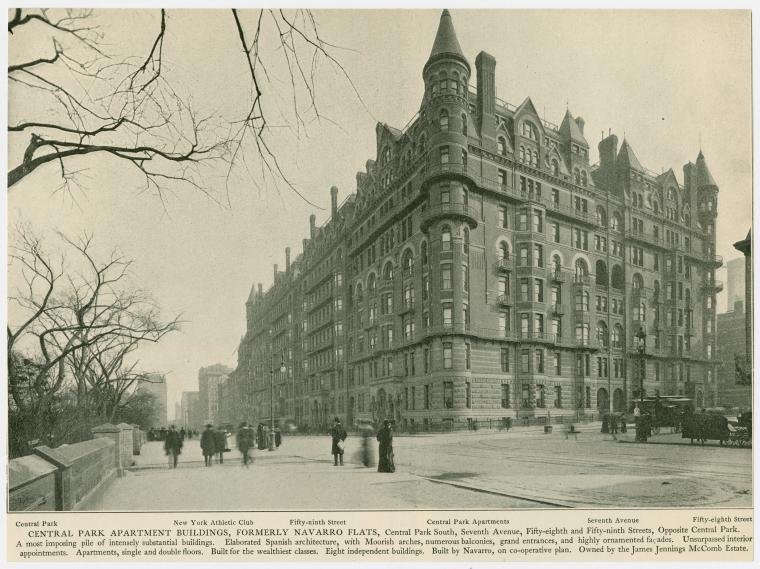 The ornate Navarro Flats was a  luxury apartment building, located on Central Park South in 1882. In 1926, the building was sold and a number of businesses took its place. 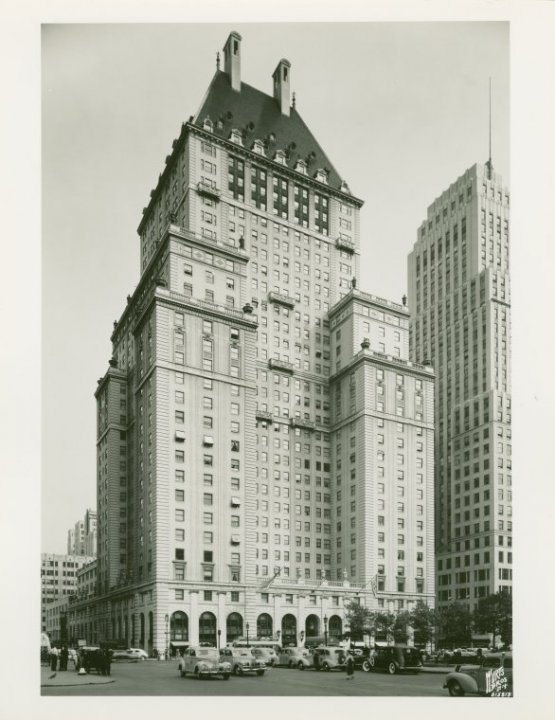 The Savoy-Plaza Hotel was a 33-story hotel overlooking Central Park at Fifth Avenue and 59th Street in New York City, New York. It opened in 1927 and was demolished in 1965. 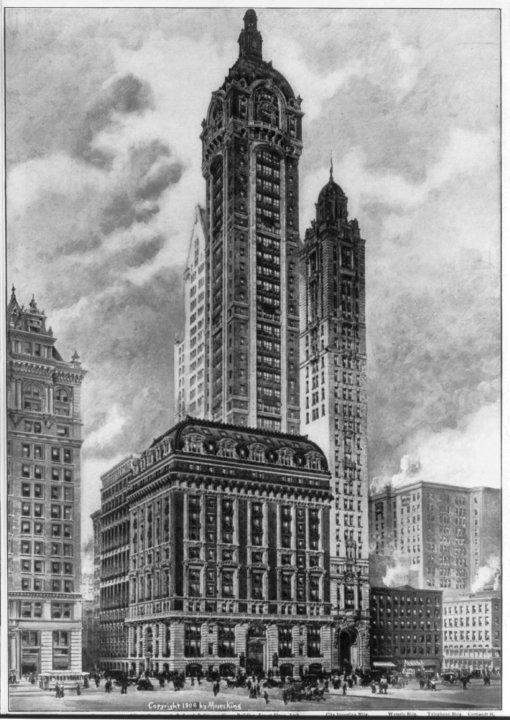 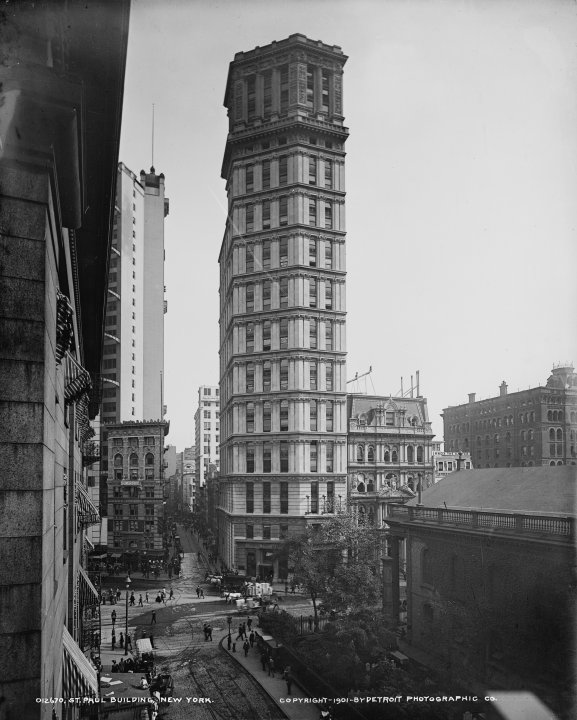 The St. Paul Building was a skyscraper in New York City built in 1898 to designs by George B. Post that repeated the same Ionic order for each floor, to little cumulative effect. At 315 feet (96 m) it was one of the tallest skyscrapers of its era. The building was 26 stories tall. It was demolished without public expression of regret in 1958 in order to make way for the Western Electric Building. 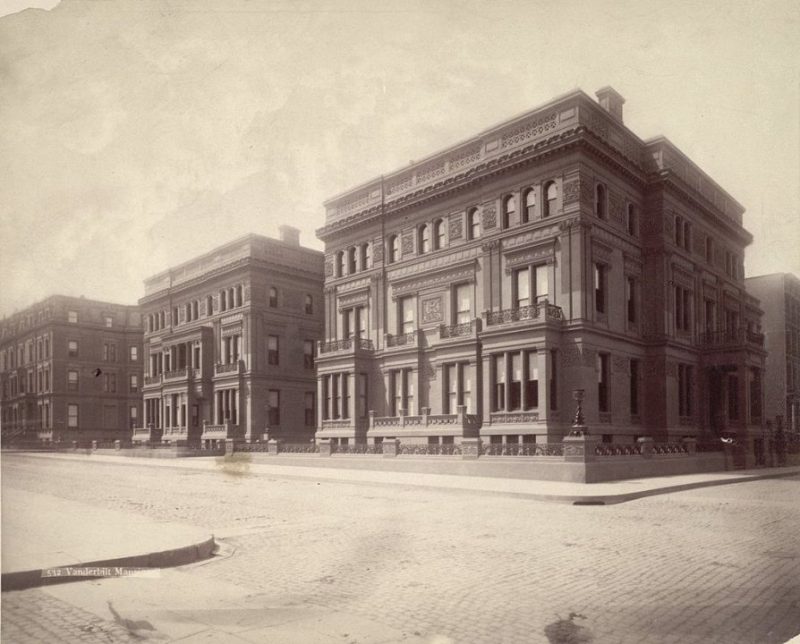 The “Triple Palace,” a series of townhouses also built for Vanderbilt family members, was directly south on Fifth Avenue. They were demolished in the 1940s.