The Peel P50 holds the record as the smallest car ever to go into production, capable of seating “one adult and a shopping bag”

The Peel P50 is a three-wheeled micro-car originally manufactured from 1962 to 1965, by the Peel Engineering Company on the Isle of Man. It was listed in the 2010 Guinness Book of Records, as the smallest production car ever made. It had no reverse gear, but a handle at the rear allows the very lightweight car to be physically maneuvered when required. 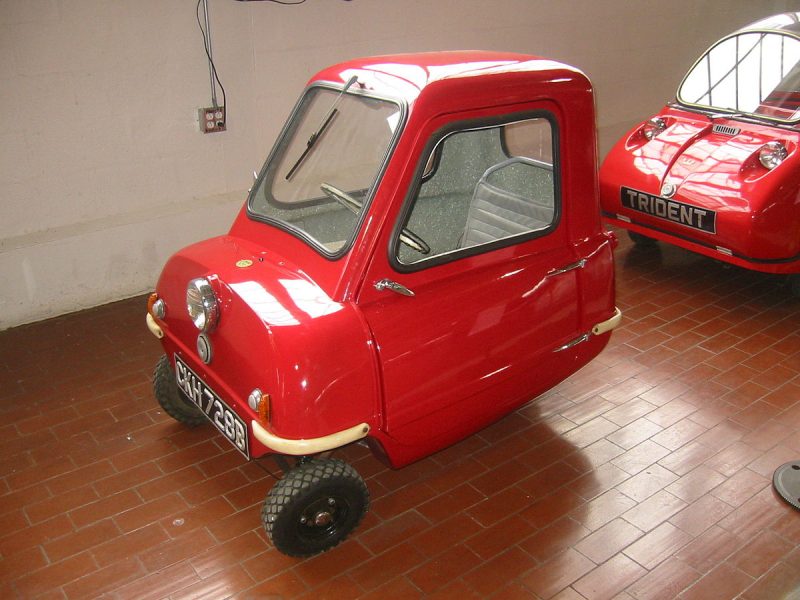 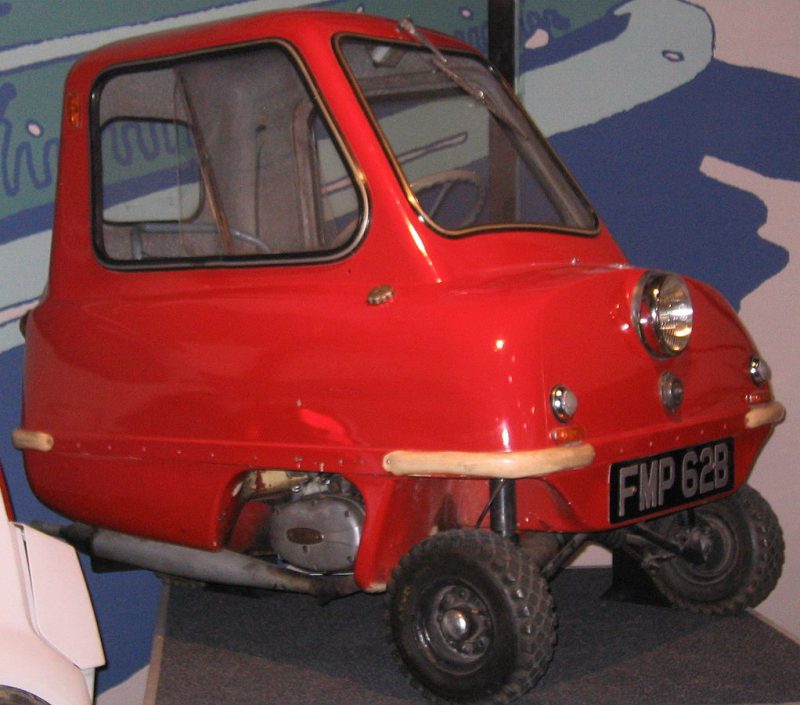 A Peel P50 Car on display at the National Motor Museum in Beaulieu, UK. source

In 2010, Peel Engineering Ltd in England started re-manufacturing the P50 and Trident models from its premises in Sutton-in-Ashfield, England. Externally this car is very similar to the original, but with mechanical differences in the suspension, steering, and drive-train, as well as a fully functioning reverse gear, ensuring they are road legal on today’s roads. Petrol models with a 49 cc, four-stroke motor are being produced, as well as electric models with an electric moped motor and gel batteries. The top speed of both cars is about 28 mph and retail prices start at £10,399 + VAT (EU only.) 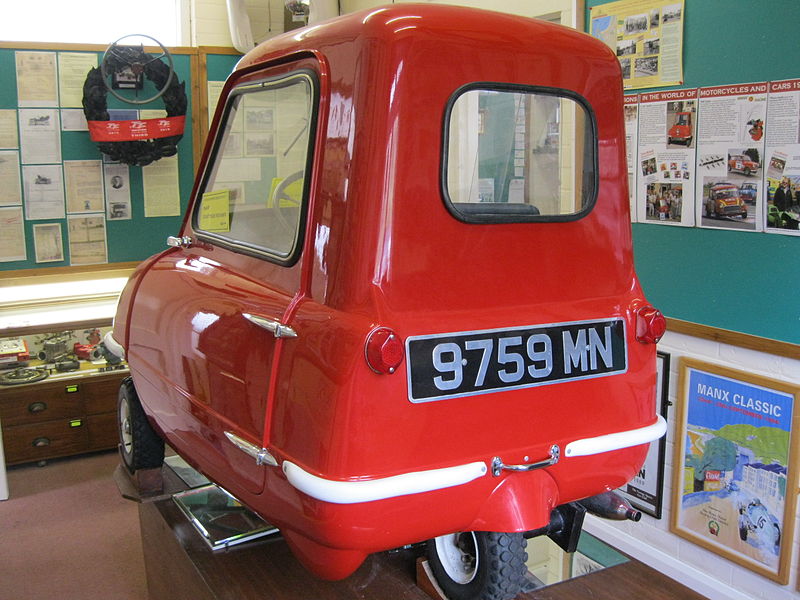 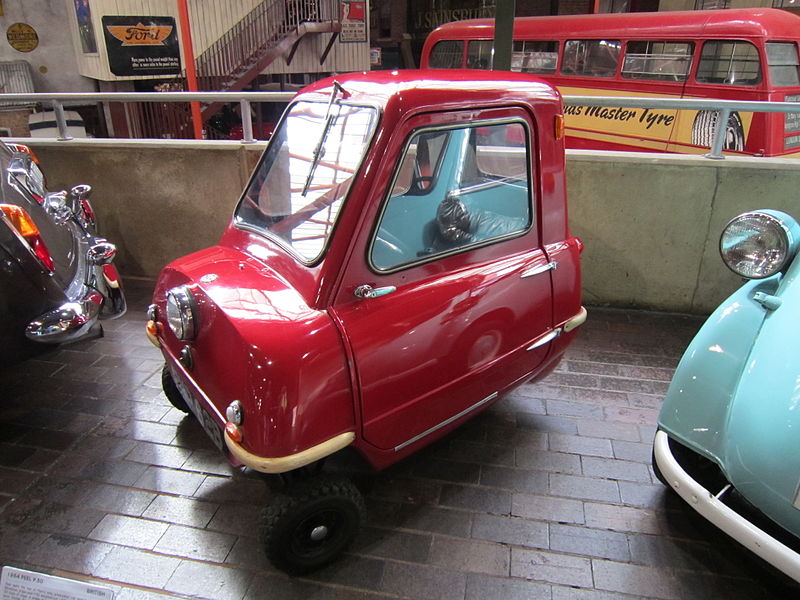 The P50 used a 49 cc (3.0 cu in) DKW engine which gave it a top speed of approximately 60 km/h (37 mph), and was equipped with a three-speed manual transmission that had no reverse gear. Consequently, turning in a confined area could be achieved only by pushing, or lifting the car using the handle on the rear and physically pulling it round. The makers and users claim fuel consumption of 100 mpg-imp (2.8 L/100 km; 83 mpg-US). 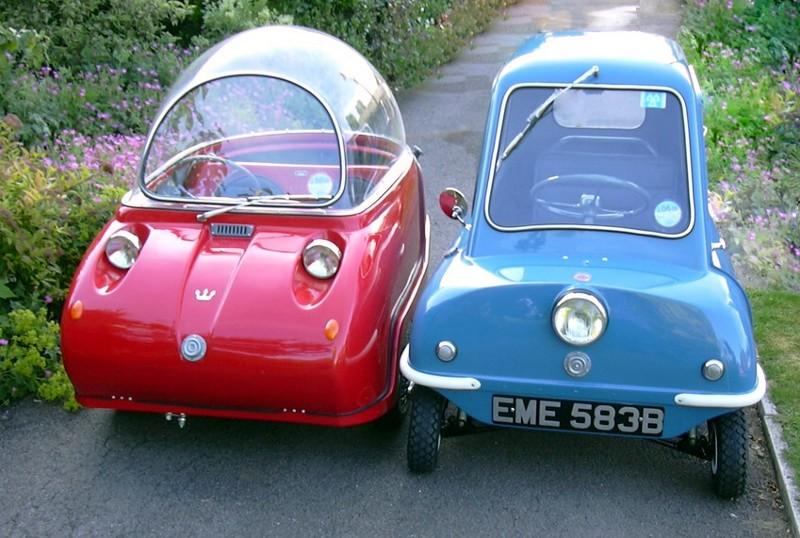 A Peel Trident replica next to an original Peel P50. source

In 1963, as a publicity stunt, A Peel P50 was taken to the top of Blackpool Tower in the lift and driven around the observation balcony.

At least one prototype, the Peel P55 Saloon Scooter, has also survived. Unlike the production Peel P50 (along with all developments and replicas thereof), this prototype used the less stable layout of a single wheel at the front and two at the back. 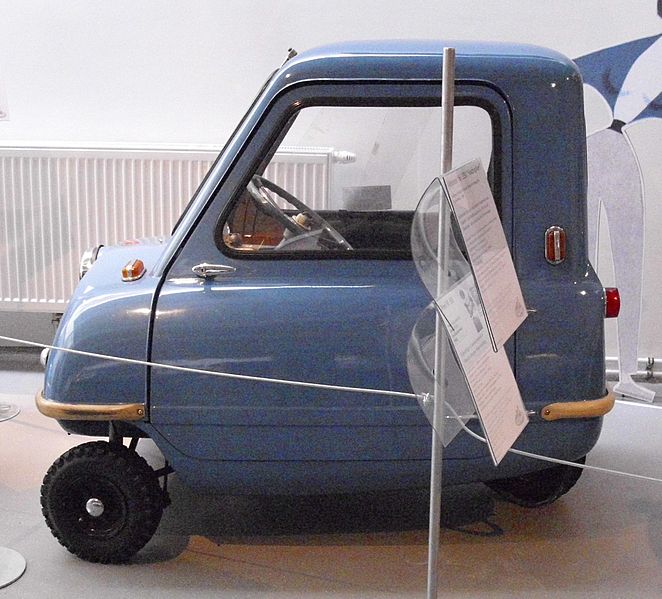 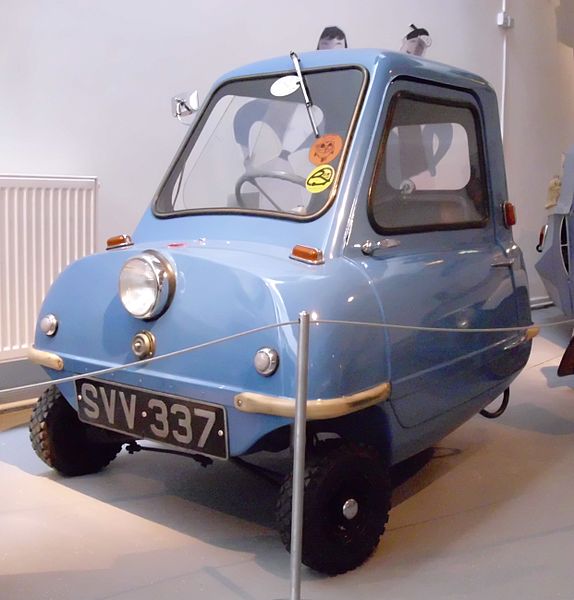 In 2011, businessmen Gary Hillman and Faizal Khan went to the Dragons’ Den asking for £80,000. They got the investment and started a new company which put their revised models into production. Three replica models were available initially: Gas, Eco, and Fun. The line was later reduced to two: the Gas and Electric models. These are hand built to order in Sutton-in-Ashfield by Micro Car Specialists for the domestic and export markets. 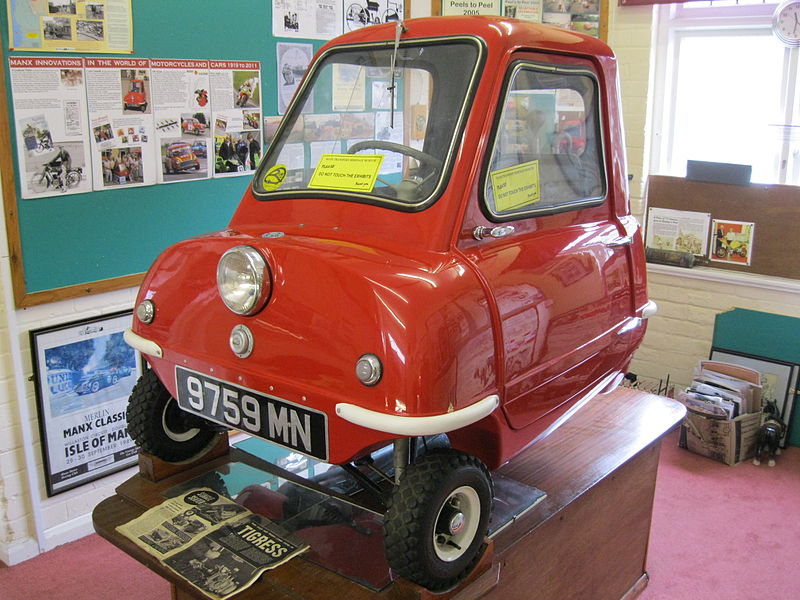 The Peel P50 was and is still road-legal in the UK and, being in the “three-wheeler” category, less than 8 long cwt (900 lb; 410 kg). The Peel P50 is now also street-legal in the United States. Cars were exported to other countries, sometimes being classified as a moped (e.g. the P50 that went to Finland).

On 28 October 2007, the P50 was featured in a segment of the BBC motoring programme Top Gear on BBC Two, during which presenter, Jeremy Clarkson, entered the car and drove through central London to work. Clarkson, who is 6′ 5″ tall (1.96 m), demonstrated that it is possible (albeit difficult) for tall people to drive the smallest car in the world, as accredited by Guinness World Records. 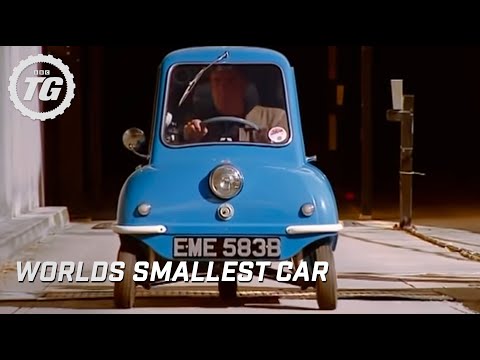 « Built in 1875 by a reclusive French refugee, the “Frenchman’s Tower“ never had any doors, requiring entry through a window
Images from an article about an unusual form of sculpture, found in a 1910 issue of American Homes and Gardens magazine »