Kayaköy, anciently known as Lebessos and Lebessus and later as Livissi is a village 8 km south of Fethiye in southwestern Turkey. Originally built in the 1700’s, the town was home to as many as 20,000 Greek Orthodox residents by the early twentieth century.

In ancient times it was a city of Lycia, Later, Anatolian Greeks lived there until approximately 1922. The ghost town, now preserved as a museum village, consists of hundreds of rundown, but still mostly standing Greek-style houses and churches which cover a small mountainside and serve as a stopping place for tourists visiting Fethiye and nearby Ölüdeniz.

The ghost town of Kayaköy itself, including hundreds of abandoned houses with no roofs or windows, and the walls of some of which are partially ruined, is the main sight. Its population in 1900 was about 2,000, almost all Greek Christians; it is now empty except for tour groups and roadside vendors selling handmade goods. However, there is a selection of houses which have been restored and are currently occupied. In its heyday, Kayaköy was populated enough to support a local newspaper and several schools and stores.

Livissi was built probably in the 18th century on the site of the ancient city of Lebessus, a town of ancient Lycia. Lycian tombs can be found in the village and at Gokceburun, north of the village.

Lebessus is mentioned as a Christian bishopric in the Notitia Episcopatuum of Pseudo-Epiphanius composed under the Byzantine Emperor Heraclius, in about 640, and in  similar early 10th-century document attributed to Emperor Leo VI the Wise, as a suffragan of the metropolitan see of Myra, the capital of the Roman province of Lycia, to which Lebessus belonged. Since it is no longer a residential bishopric, Lebessus is listed by the Catholic Church as a titular see. 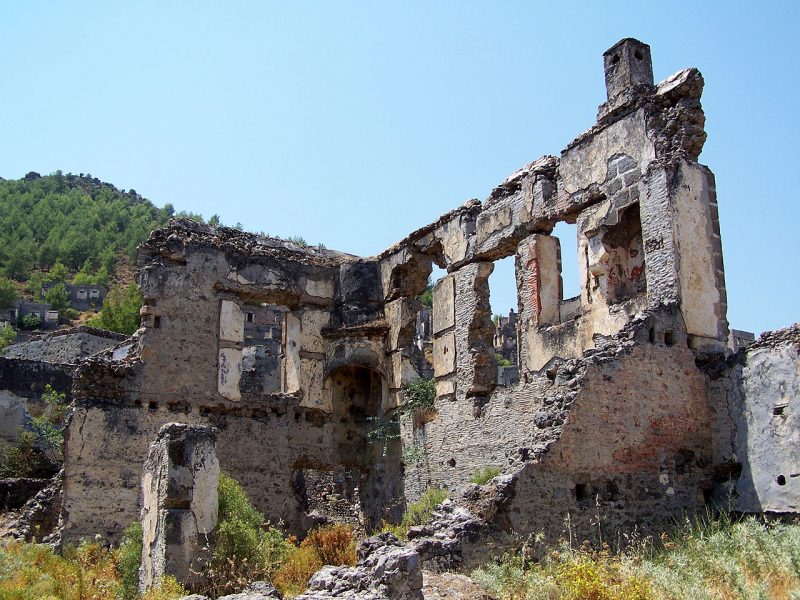 Abandoned house at Kayaköy. By User:Darwinek – Own work, CC BY-SA 3.0 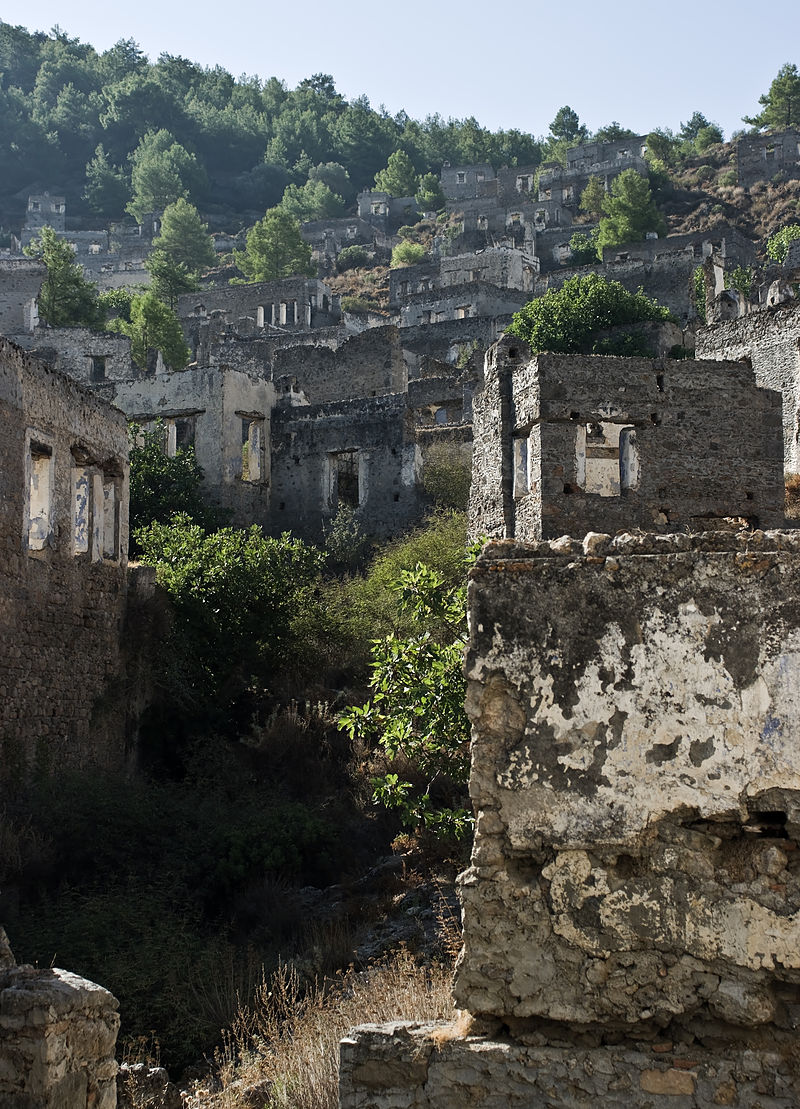 house at Kayaköys By Nikodem Nijaki – Own work, CC BY-SA 3.0, 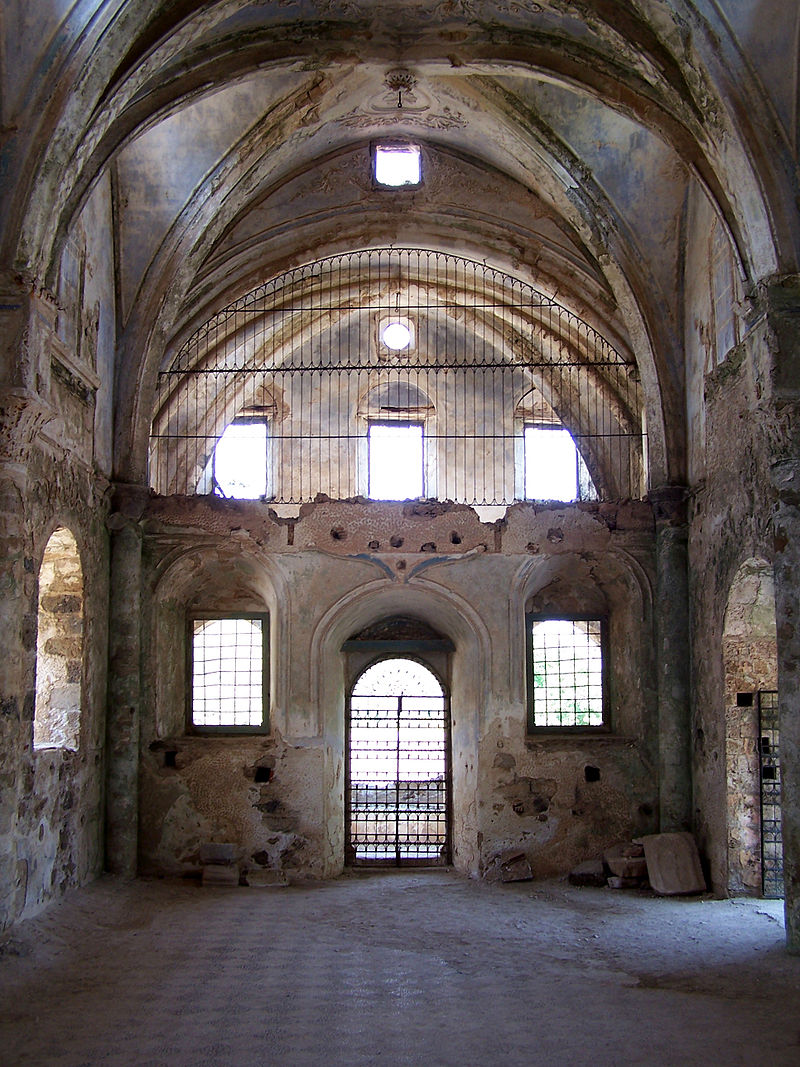 Interior of the Lower Church in Kayaköy, Turkey.By User:Darwinek – Own work, CC BY-SA 3.0,

Livissi is probably the place where the inhabitants of Byzantine Gemiler Island fled to protect themselves from pirates. It experienced a renewal after nearby Fethiye (known as Makri) was devastated by an earthquake in 1856 and a major fire in 1885. More than 20 churches and chapels were built in the village and the plain (Taxiarhes – the ‘Upper’ church – and ‘Panayia Pyrgiotissa‘ – the ‘lower’ church – St. Anna, St. George, etc.). Most of them are still standing in ruinous or semi-ruinous condition. The village’s population was over 6.000 people, according to Greek and Ottoman sources.

At the ending of the Greco-Turkish War (1919–1922), Kayaköy was already completely abandoned. The persecutions of Livissi inhabitants, as well as Greeks of nearby Makri, were part of the wider campaign against all Ottoman Greeks and other Christians of the Empire. 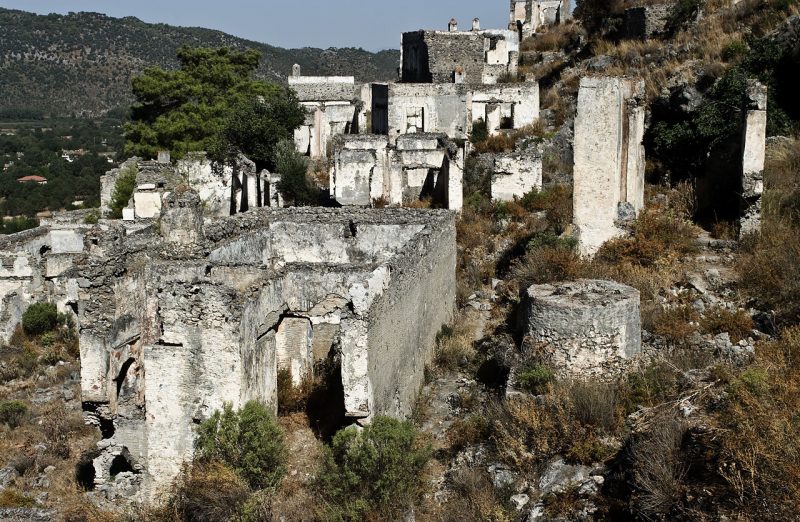 The persecutions in the area started in 1914 in Makri. In 1916, a letter in Greek addressing to Sir Alfred Biliotti, the Consul General of Great Britain at Rhodes, explained the murders and persecution of Livissi and Macri Greeks, who asked him to intervene. Unfortunately, the letter was intercepted at Livissi, by Turkish authorities. Later that same year, many families of Levissi were deported and driven on foot to Denizli, around 220 km away. There, they suffered various extreme atrocities and tortures, facing even death.

Two more exiles phases followed in 1917 and 1918. In 1917, families were sent to villages near Denizli, such as Acıpayam, through forced march of fifteen days, consisting mainly of the elderly, women and children, who had remained in the area. During that death march, the roads were strewn with bodies of dead children and the elderly who succumbed to hunger and fatigue. The exiles of the next year were no less harsh. In September 1922, the few remaining Greeks of Livissi and Makri abandoned their homes and embarked on ships to Greece. Some of them founded Nea Makri (New Makri) in Attica. 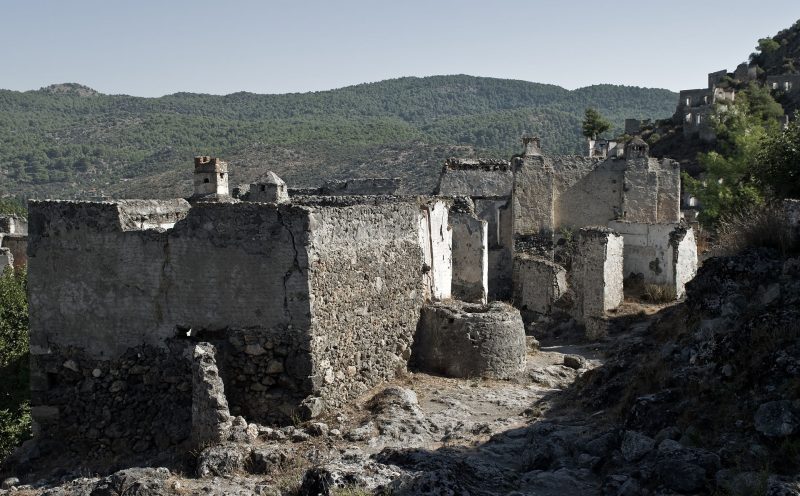 Many of the abandoned buildings were damaged in the 1957 Fethiye earthquake. Today Kayaköy village serves as a museum and is a historical monument. Around 500 houses remain as ruins and are under the protection of the Turkish government, including two Greek Orthodox Churches, which remain the most important sites of the ghost town. There is a private museum on the history of the town. In the middle of the village stands a fountain that dates from the seventeenth century. Kayaköy was adopted by the UNESCO as a World Friendship and Peace Village. 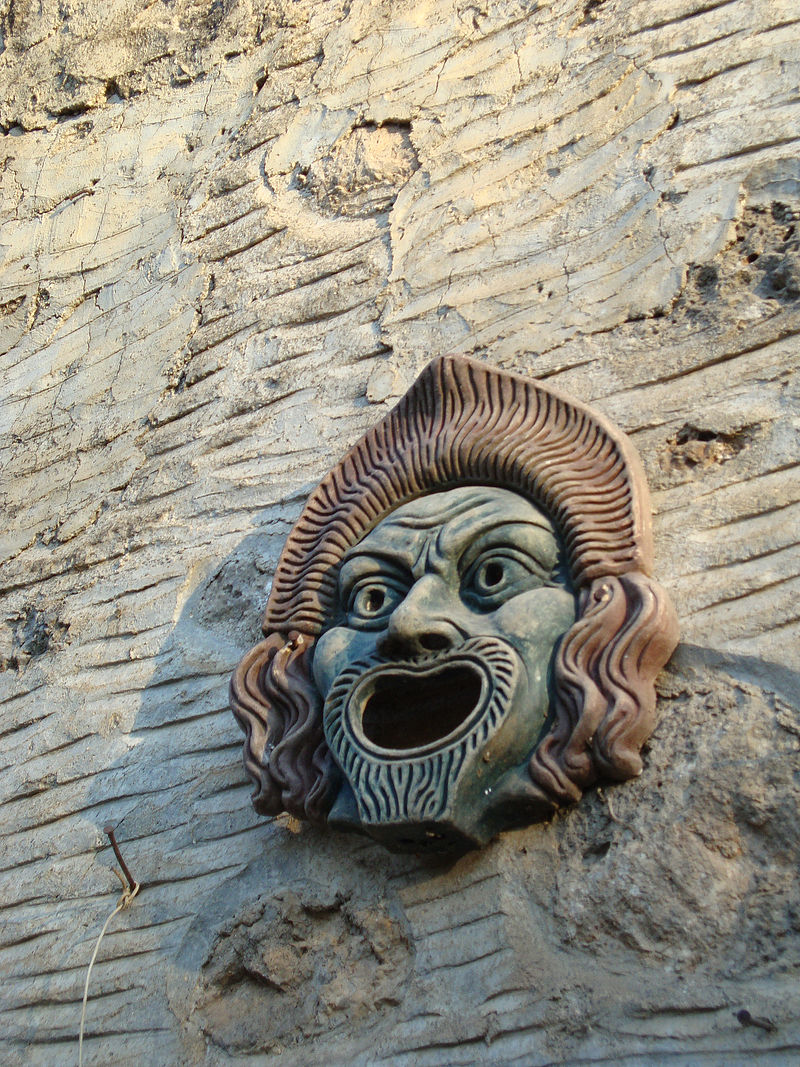 On 9th September 2014, the Turkish government announced plans to develop the village. It plans to offer a 49-year lease that will “partially open Kayaköy’s archeological site to construction” and anticipated “construction of a hotel, as well as tourist facilities that will encompass one-third of the village.”

Villagers were mostly professional craftsmen. Currently, the most important economic activity in the place is tourism. It is envisaged that the village will be partially restored.

« Portraits of Native Americans who performed in “Buffalo Bill’s Wild West”-1898
The Anatomy of a Dirigible: Photos of detailed construction of an Airship »