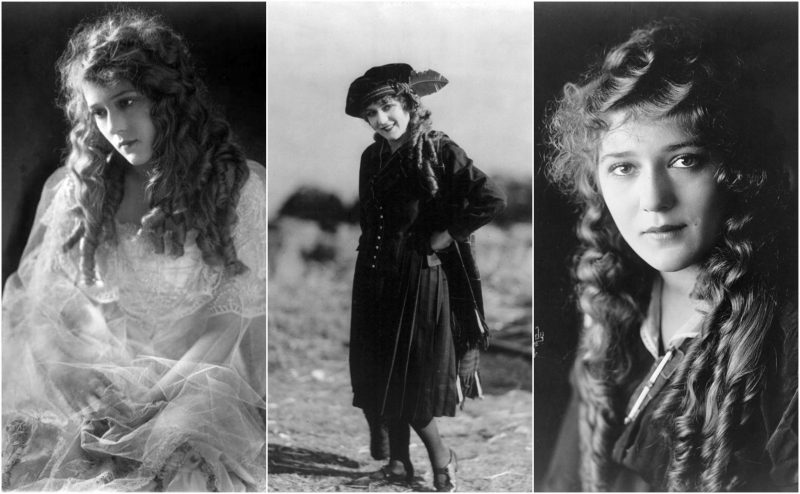 Known in her prime as “America’s Sweetheart”  and the “girl with the curls”,Pickford was one of the Canadian pioneers in early Hollywood and a significant figure in the development of film acting. Pickford was one of the earliest stars to be billed under her name (film stars up until that time were usually unbilled), and was one of the most popular actresses of the 1910’s and 1920’s, earning the nickname “Queen of the Movies”. 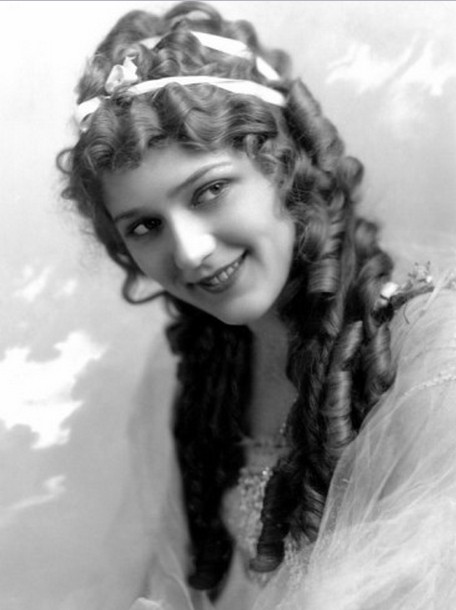 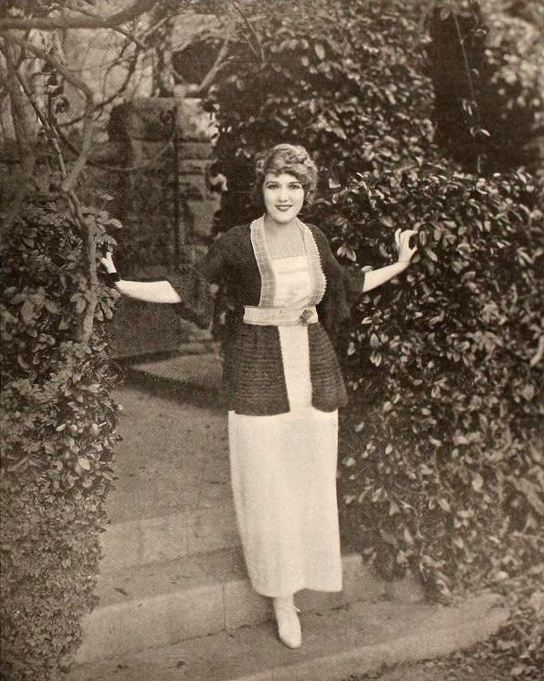 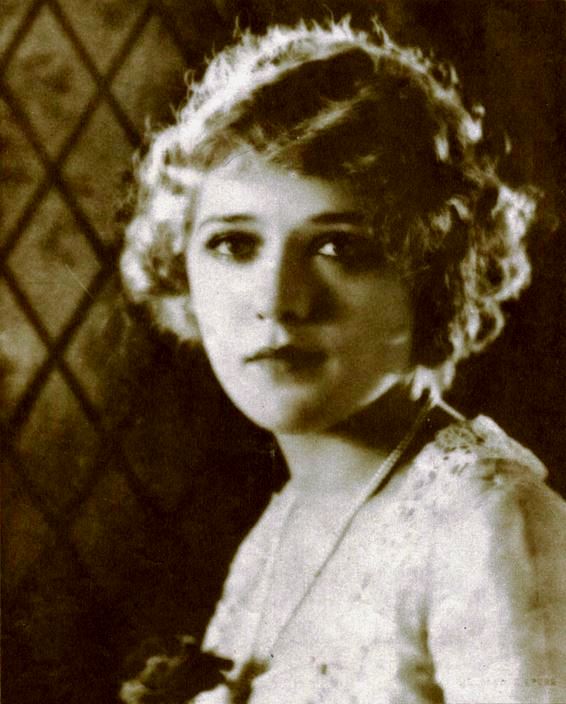 When Gladys was age four, her household was under infectious quarantine, a public health measure. Her mother asked a visiting priest to baptize the children as Catholic. Pickford was at this time baptized as Gladys Marie Pickford.Their devoutly Catholic maternal grandmother (Catherine Faeley Hennessey) approved the baptism.As an adult, she attended St. Mary of the Angels Anglican Church in Hollywood, California. 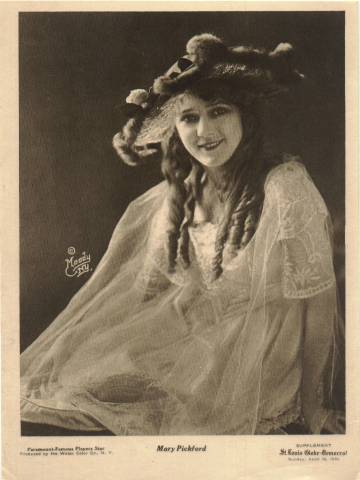 Charlotte Hennessey Smith began taking in boarders after being widowed. One of these was a theatrical stage manager. At his suggestion, Gladys (age 7) was given two small roles, one as a boy and the other as a girl, in a stock company production of The Silver King at Toronto’s Princess Theatre. She subsequently acted in many melodramas with Toronto’s Valentine Company, finally playing the major child role in their version of The Silver King. She capped her short career in Toronto with the starring role of Little Eva in their production of Uncle Tom’s Cabin, adapted from the 1852 novel by American writer and abolitionist Harriet Beecher Stowe. 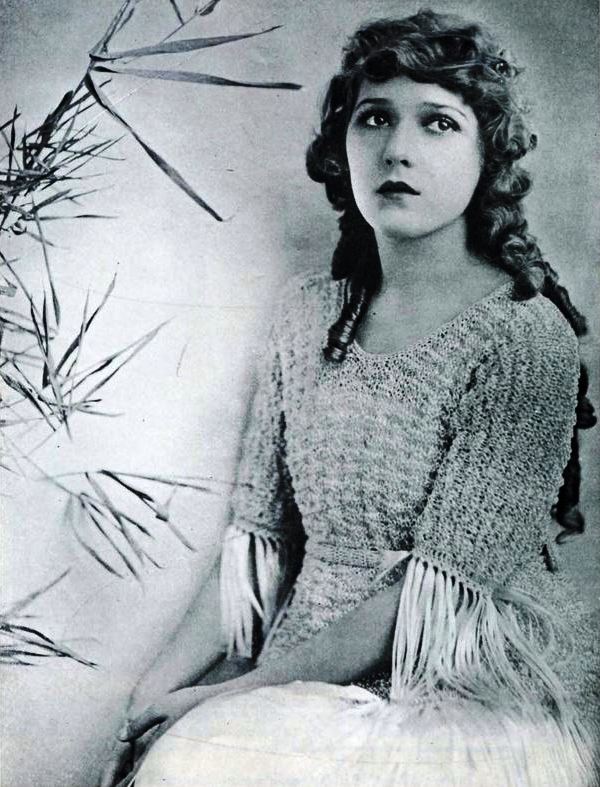 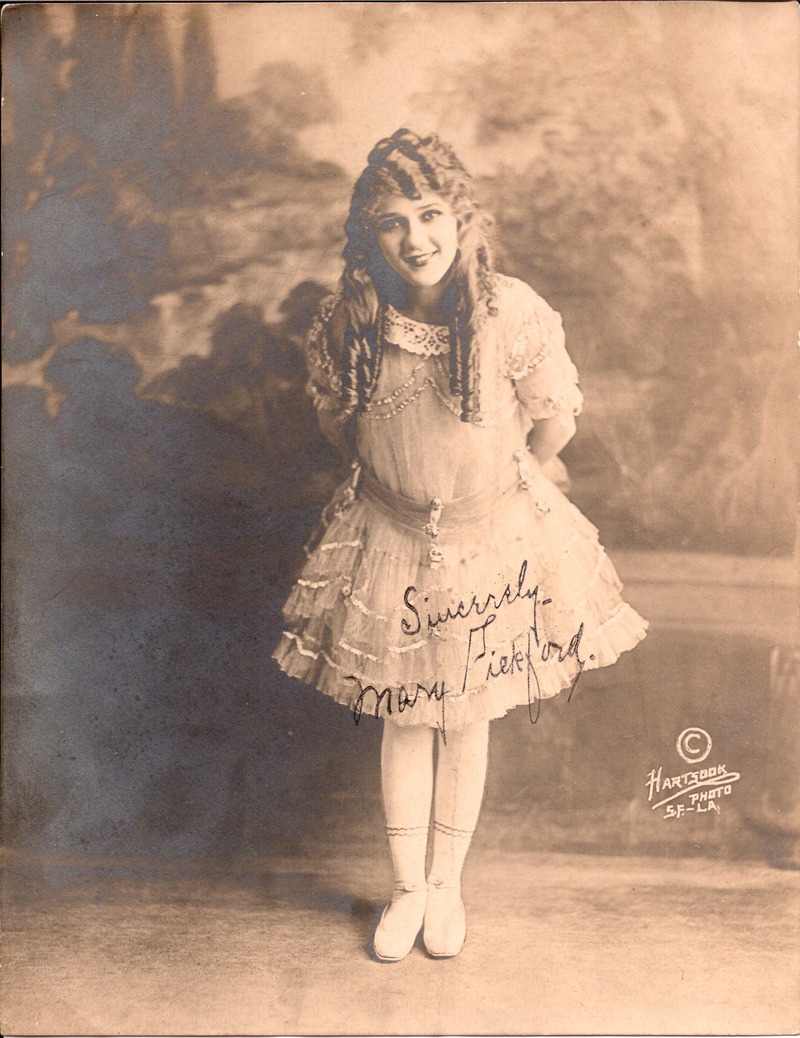 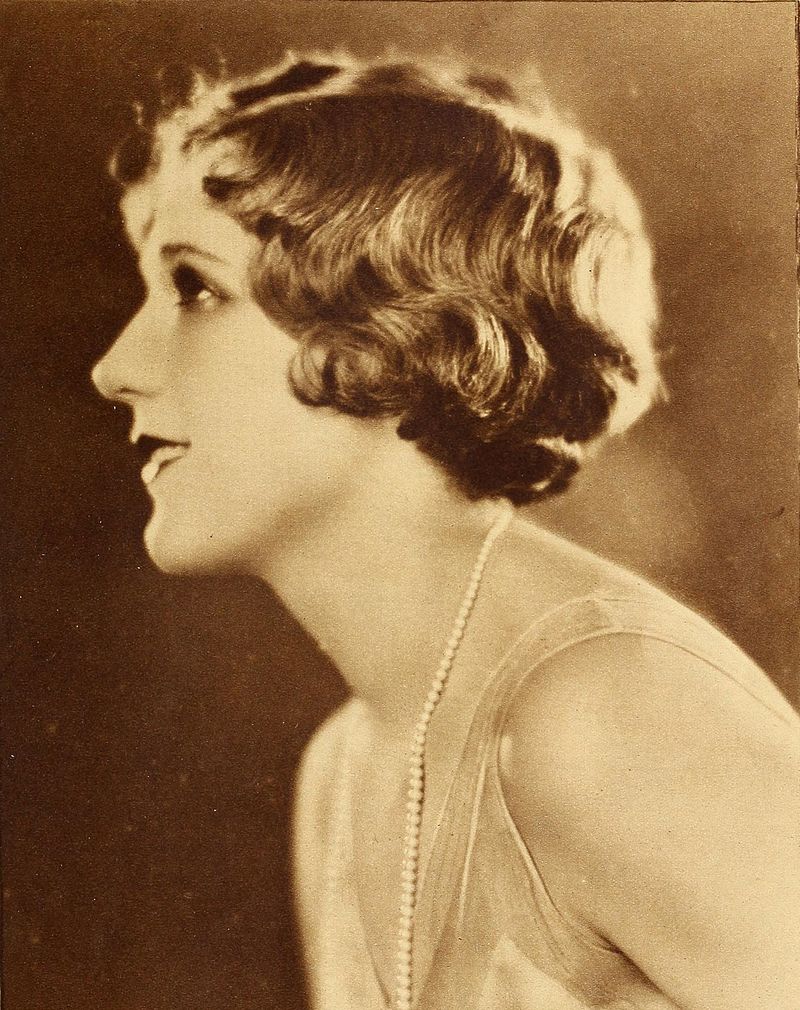 Included in the set of Rolf Armstrong’s 16 screen beauties. .Source 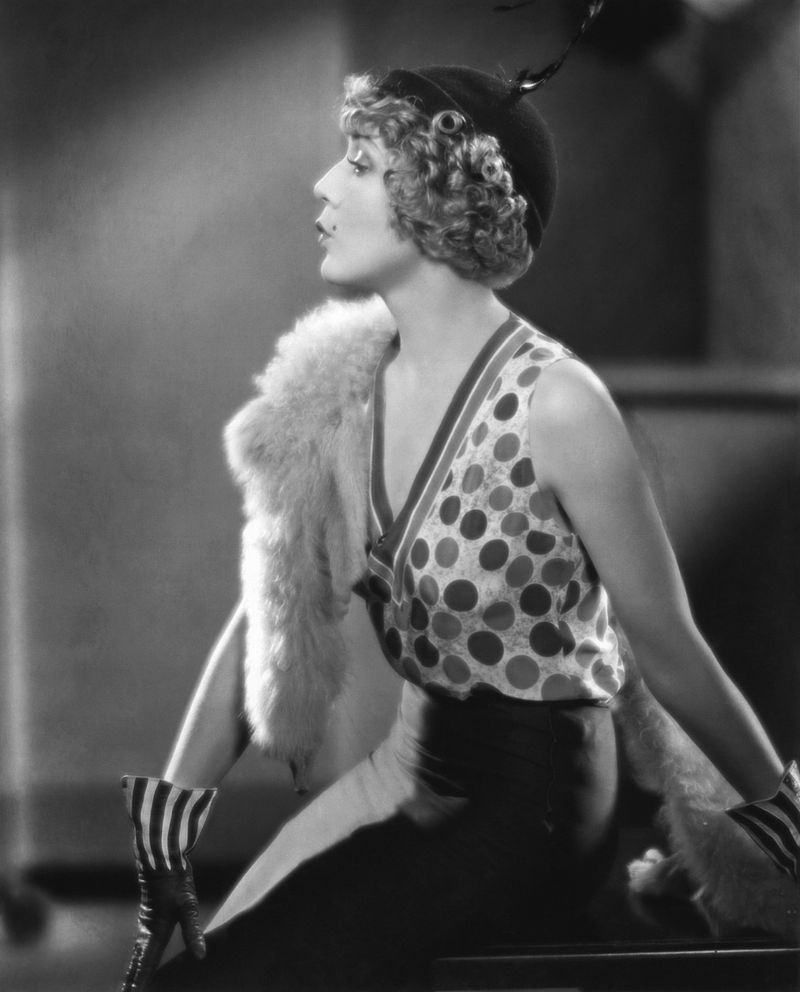 By the early 1900s, the theater had become a family enterprise. Gladys, her mother, and two younger siblings toured the United States by rail, performing in third-rate companies and plays. After six impoverished years, Pickford allowed one more summer to land a leading role on Broadway, planning to quit acting if she failed. In 1906 Gladys, Lottie and Jack Smith supported singer Chauncey Olcott on Broadway in Edmund Burke.Gladys finally landed a supporting role in a 1907 Broadway play, The Warrens of Virginia. The play was written by William C. deMille, whose brother, Cecil, appeared in the cast. David Belasco, the producer of the play, insisted that Gladys Smith assumed the stage name, Mary Pickford. After completing the Broadway run and touring the play, however, Pickford was again out of work.

On April 19, 1909, the Biograph Company director D. W. Griffith screen-tested her at the company’s New York studio for a role in the nickelodeon film, Pippa Passes. The role went to someone else but Griffith was immediately taken with Pickford. She quickly grasped that movie acting was simpler than the stylized stage acting of the day. Most Biograph actors earned $5 a day but, after Pickford’s single day in the studio, Griffith agreed to pay her $10 a day against a guarantee of $40 a week.

Pickford, like all actors at Biograph, played both bit parts and leading roles, including mothers, ingenues, charwomen, spitfires, slaves, native Americans, spurned women, and a prostitute. As Pickford said of her success at Biograph:

“I played scrubwomen and secretaries and women of all nationalities … I decided that if I could get into as many pictures as possible, I’d become known, and there would be a demand for my work.”

She appeared in 51 films in 1909 – almost one a week. She also introduced her friend Florence La Badie to D. W. Griffith, who launched La Badie’s career. Pickford starred in 52 features throughout her career. In 1916, Pickford signed a new contract with Zukor that granted her full authority over production of the films in which she starred and a record-breaking salary of $10,000 a week. 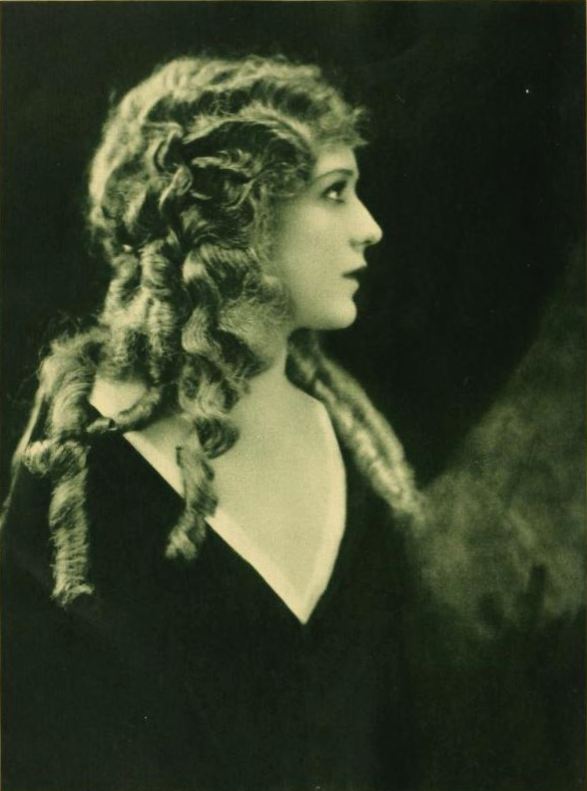 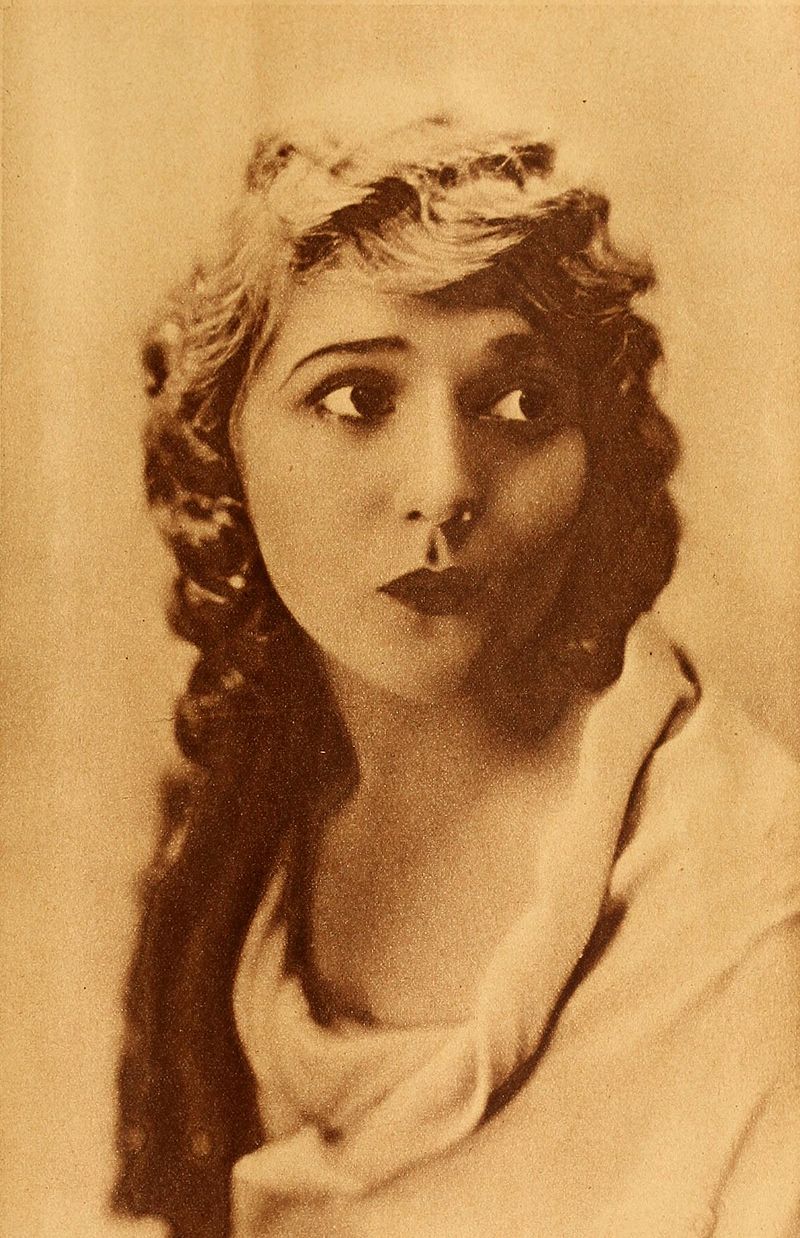 In January 1910, Pickford traveled with a Biograph crew to Los Angeles. Many other film companies wintered on the West Coast, escaping the weak light and short days that hampered winter shooting in the East. Pickford added to her 1909 Biographs movies (Sweet and Twenty, They Would Elope, and To Save Her Soul, to name a few) with films made in California.

She played a reckless socialite in Coquette (1929), a role for which her famous ringlets were cut into a 1920’s bob. Pickford had already cut her hair in the wake of her mother’s death in 1928. Fans were shocked at the transformation.Pickford’s hair had become a symbol of female virtue, and when she cut it, the act made front-page news in The New York Times and other papers. Coquette was a success and won her an Academy Award for Best Actress, although this was highly controversial. The public failed to respond to her in the more sophisticated roles. Like most movie stars of the silent era, Pickford found her career fading as talkies became more popular among audiences. 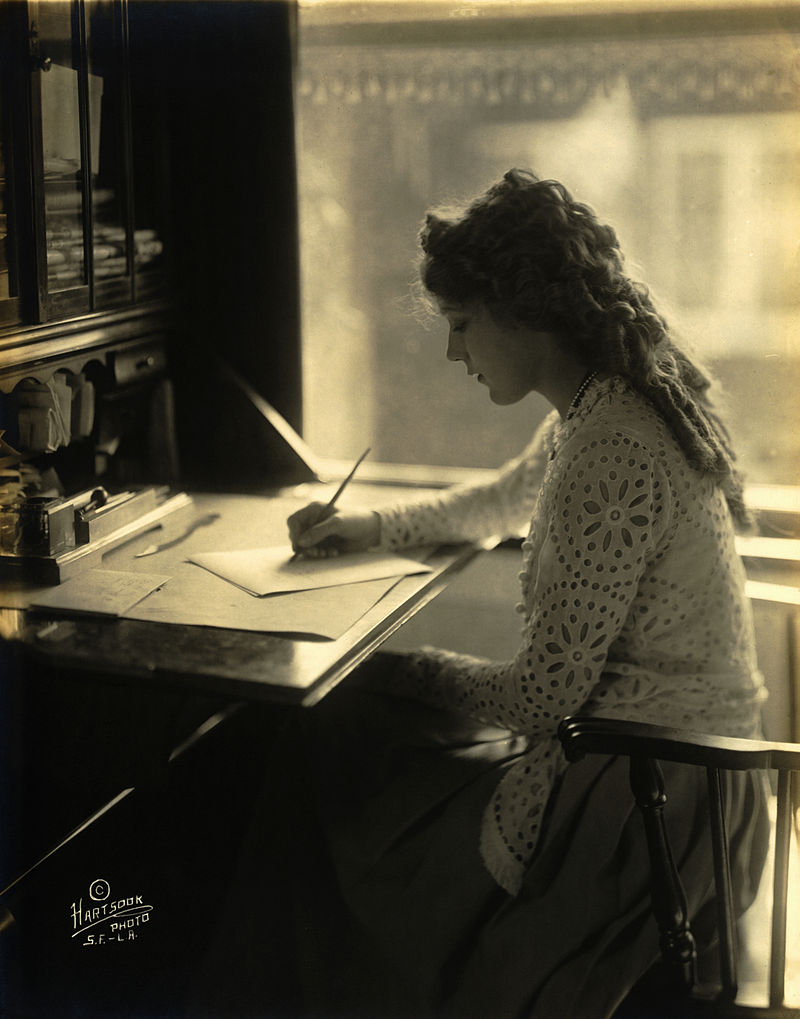 Her next film, The Taming of The Shrew, made with husband Douglas Fairbanks, was not well received at the box office. Established Hollywood actors were panicked by the impending arrival of the talkies. On March 29, 1928, The Dodge Brothers Hour was broadcast from Pickford’s bungalow, featuring Fairbanks, Chaplin, Norma Talmadge, Gloria Swanson, John Barrymore, D.W. Griffith, and Dolores del Rio, among others. They spoke on the radio show to prove that they could meet the challenge of talking movies. 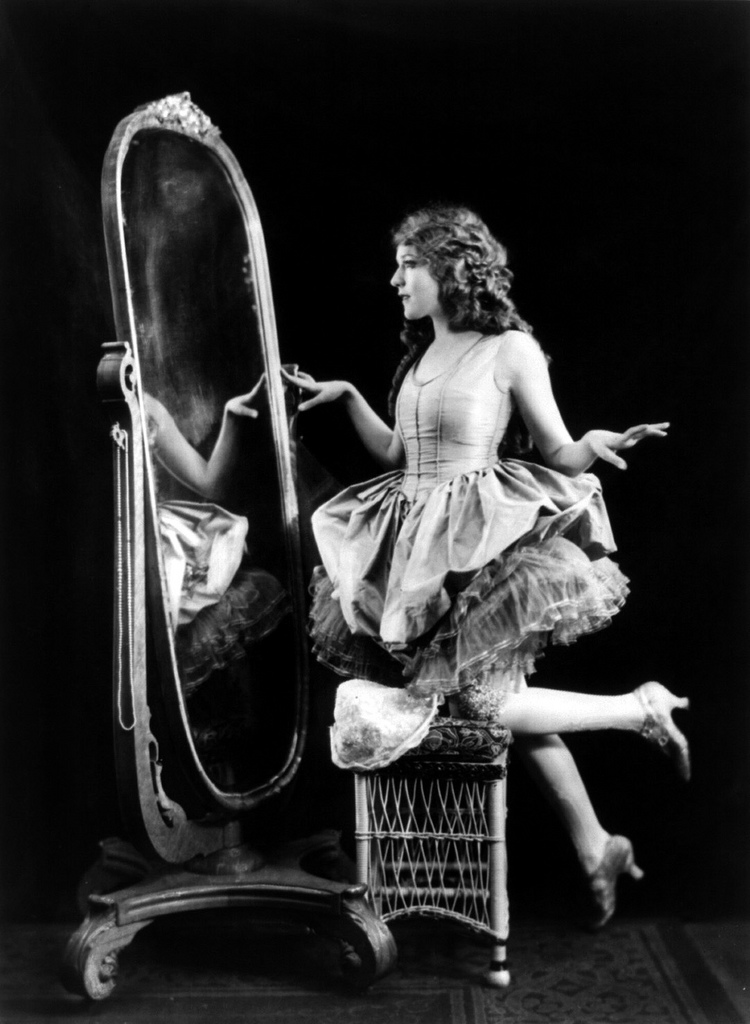 Mary Pickford, full-length, facing left; kneeling on a chair in front of a mirror. .Source 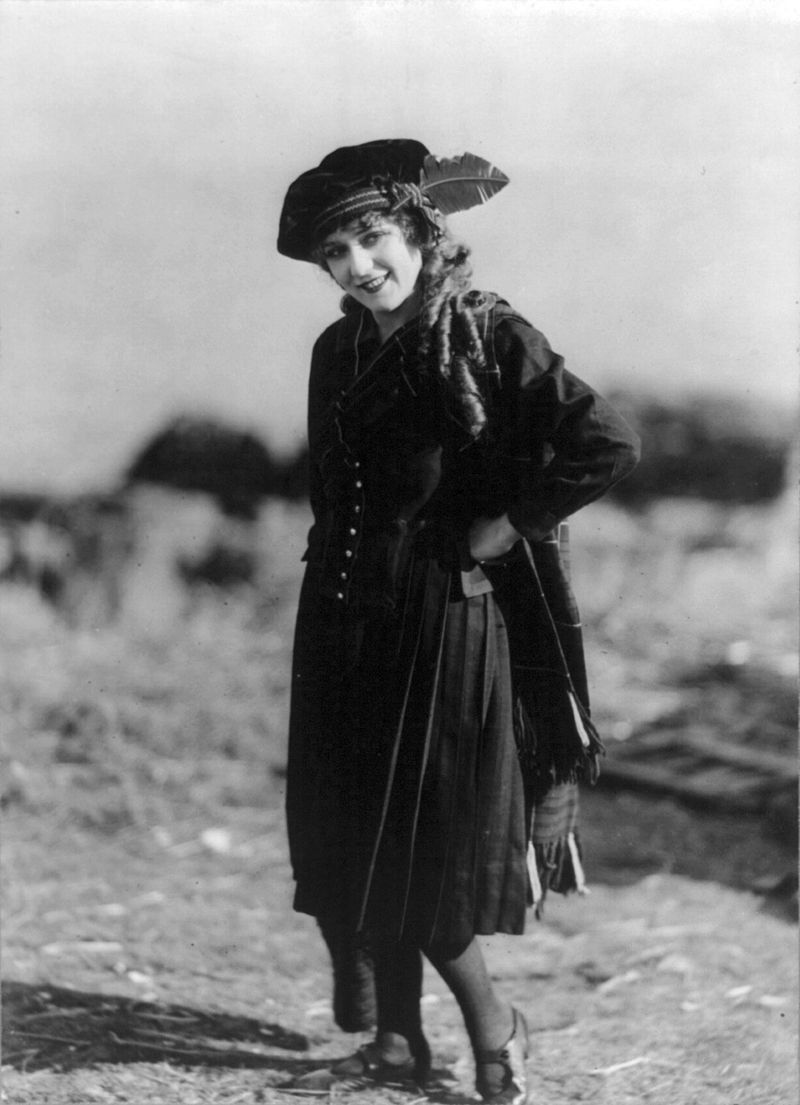 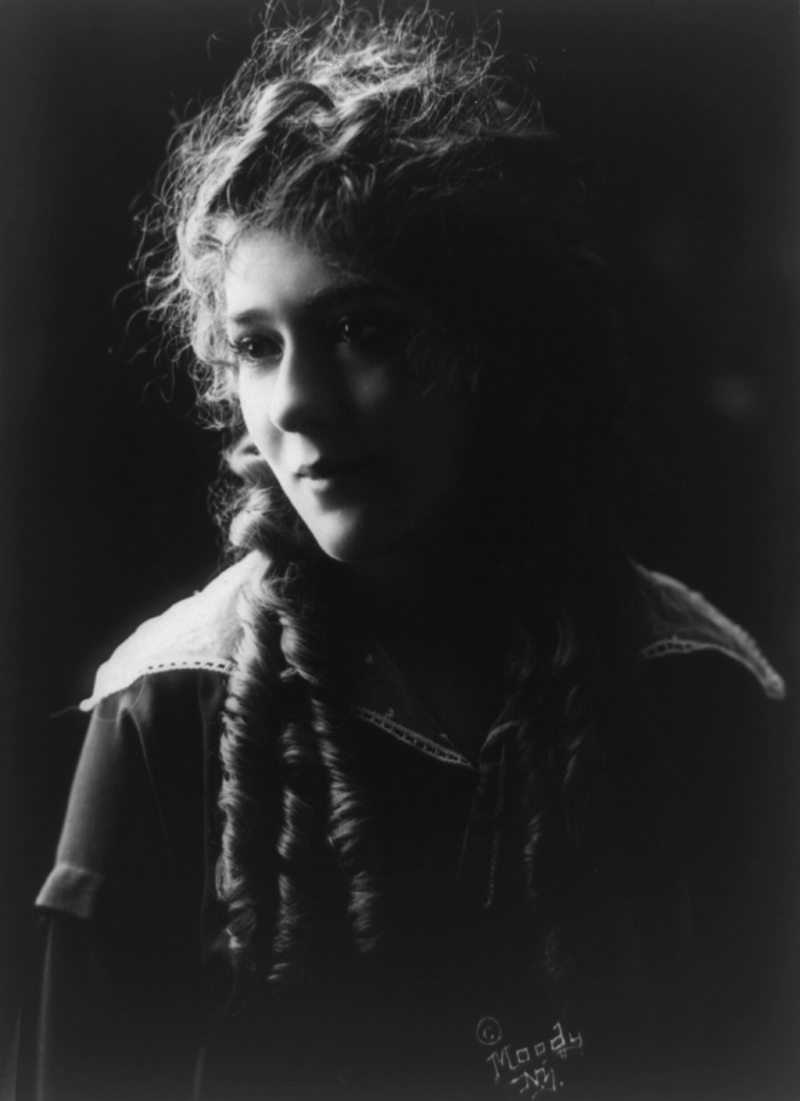 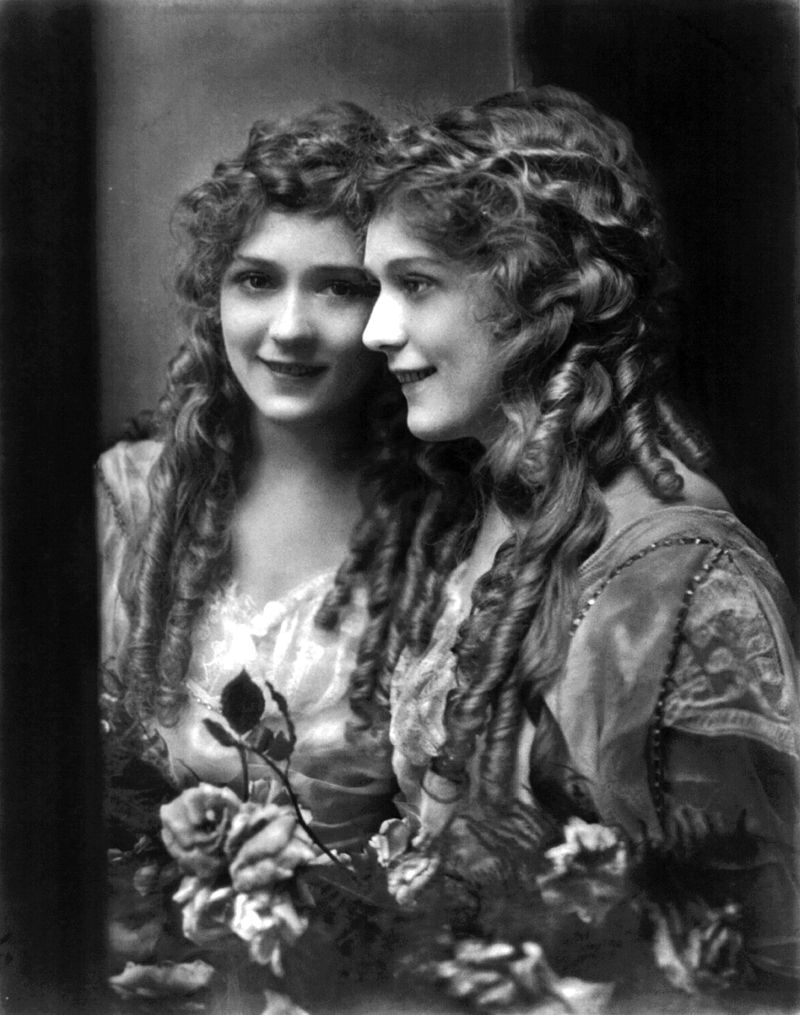 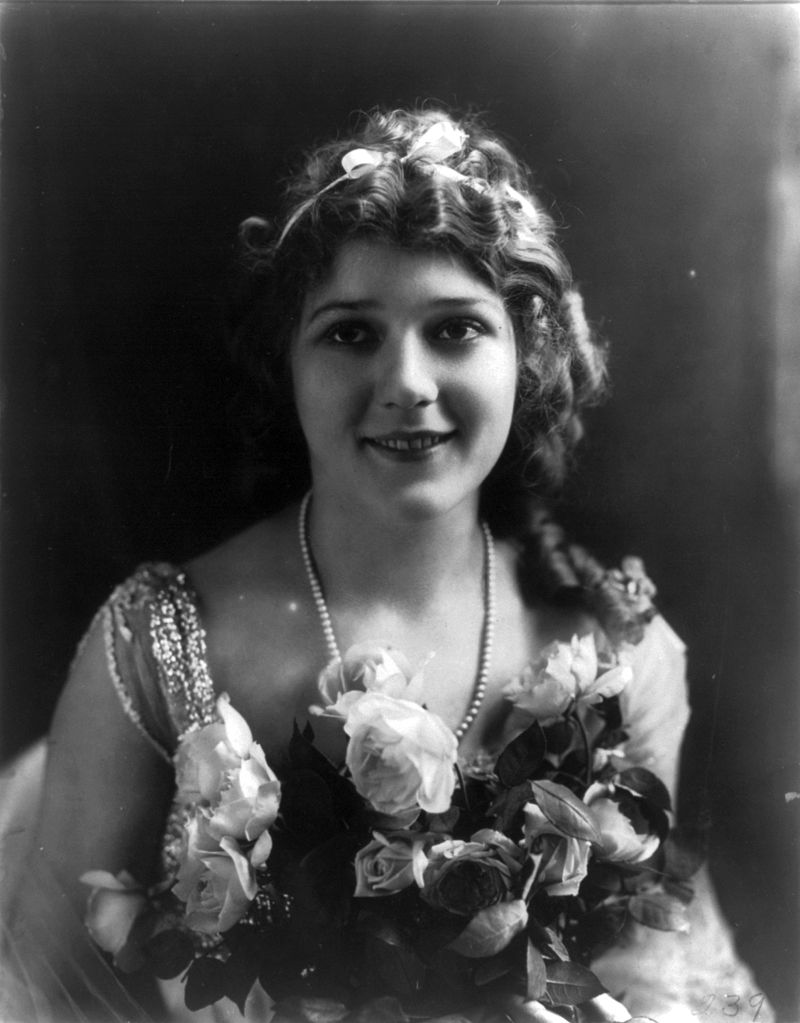 But the transition came as Pickford was in her late 30s, no longer able to play the children, teenage spitfires, and feisty young women so adored by her fans, and was not suited for the glamorous and vampish heroines of early sound. In 1933, Pickford underwent a Technicolor screen test for an animated/live action film version of Alice in Wonderland, but Walt Disney discarded the project when Paramount released its own version of the book. Only one Technicolor still of her screen test still exists. She retired from acting in 1933; her last acting film was released in 1934. She continued to produce for others, however, including Sleep, My Love (1948; with Claudette Colbert) and Love Happy (1949), with the Marx Brothers. 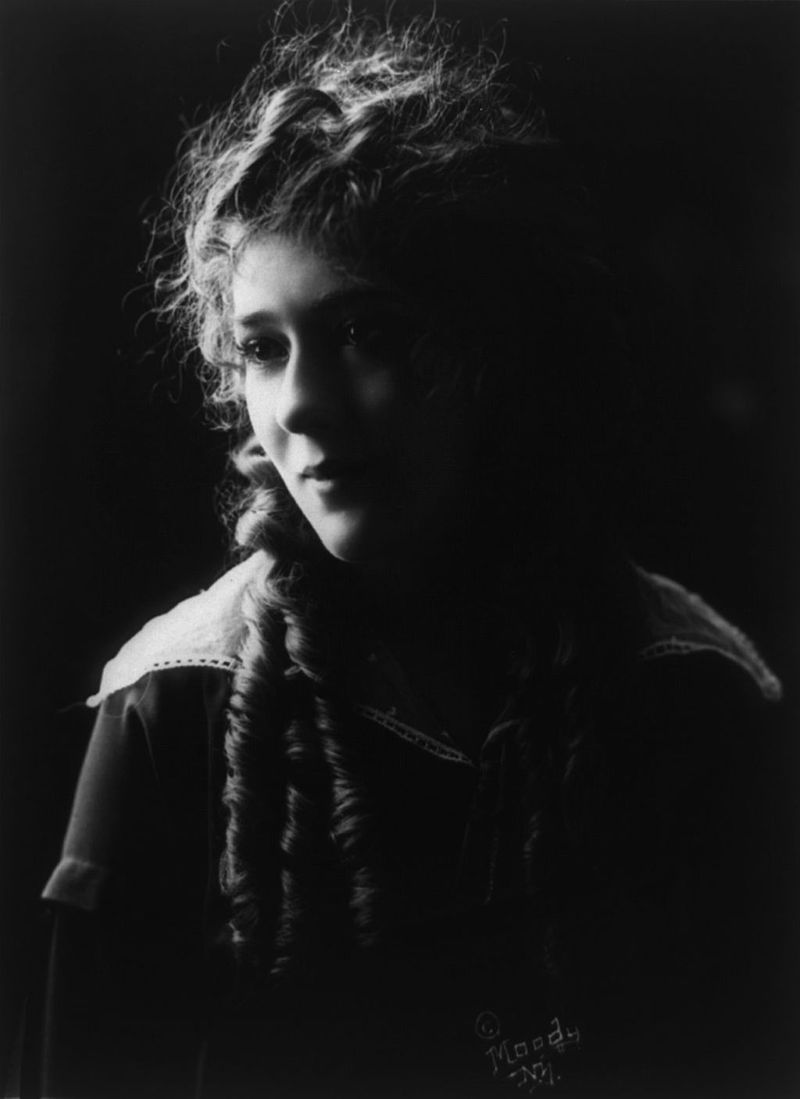 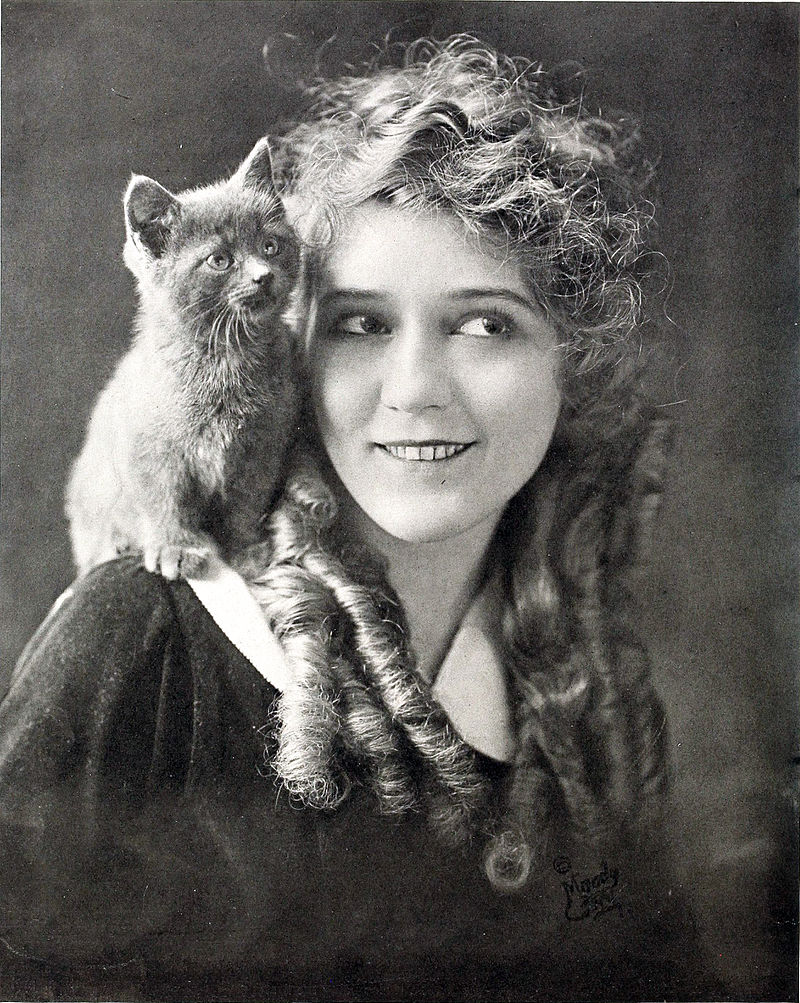 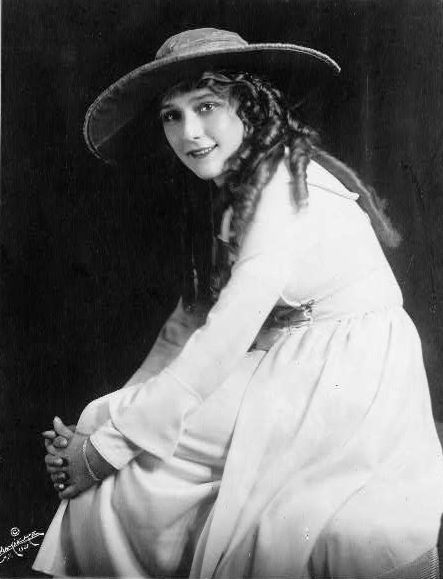 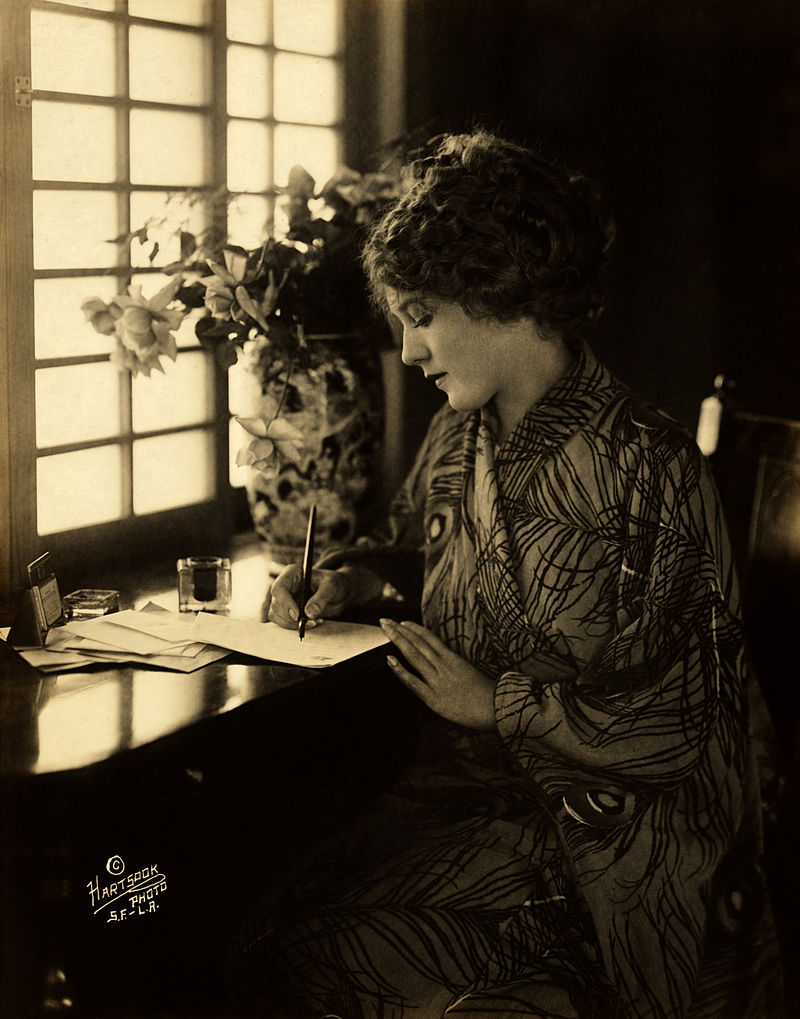 Mary Pickford, wearing a kimono, writing at a desk .Source 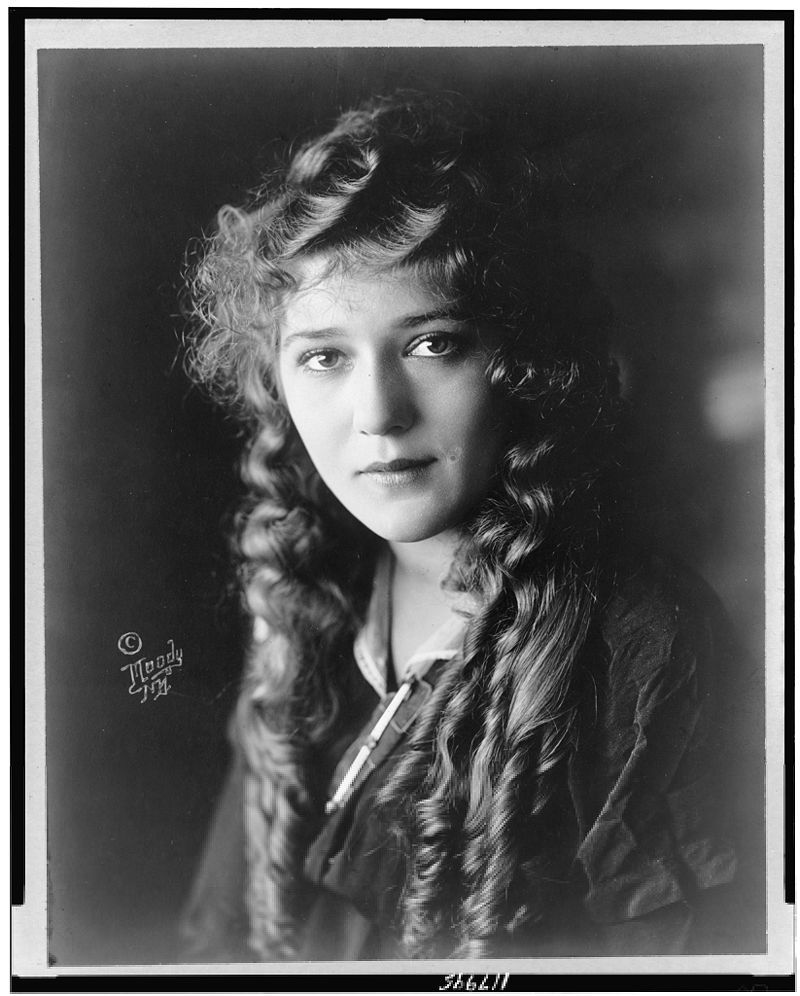 Original copy of photograph cropped and touched up. .Source

Pickford used her stature in the movie industry to promote a variety of causes. Although her image depicted fragility and innocence, Pickford proved to be a clever businesswoman who took control of her career in a cutthroat industry. 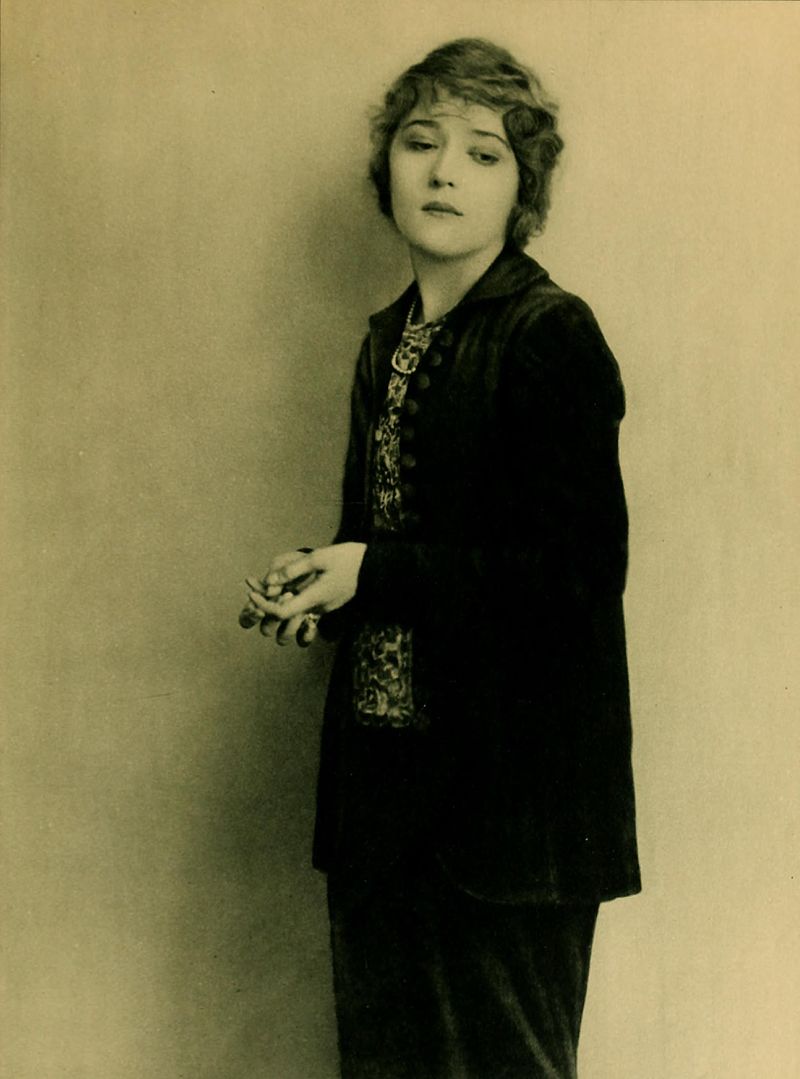 Pickford was married three times. She married Owen Moore, an Irish-born silent film actor, on January 7, 1911. It is rumored she became pregnant by Moore in the early 1910s and had a miscarriage or had an abortion. The couple had numerous marital problems, notably Moore’s alcoholism, insecurity about living in the shadow of Pickford’s fame, and bouts of domestic violence. The couple lived together on-and-off for several years.

Pickford became secretly involved in a relationship with Douglas Fairbanks. They toured the US together in 1918 to promote Liberty Bond sales for the World War I effort. Around this time, Pickford also suffered from the flu during the 1918 flu pandemic but survived. Pickford divorced Moore on March 2, 1920, after she agreed to his $100,000 demand for a settlement. She married Fairbanks just days later on March 28, 1920. They went to Europe for their honeymoon; fans in London and in Paris caused riots trying to get to the famous couple. The couple’s triumphant return to Hollywood was witnessed by vast crowds who turned out to hail them at railway stations across the United States. 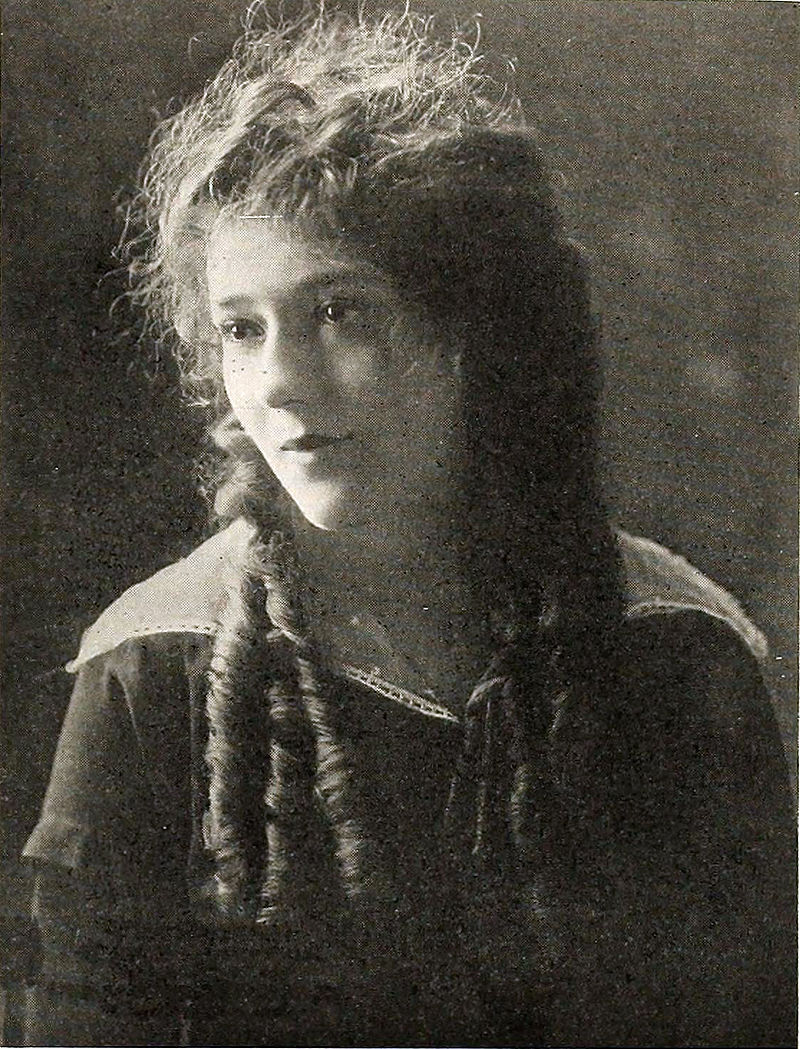 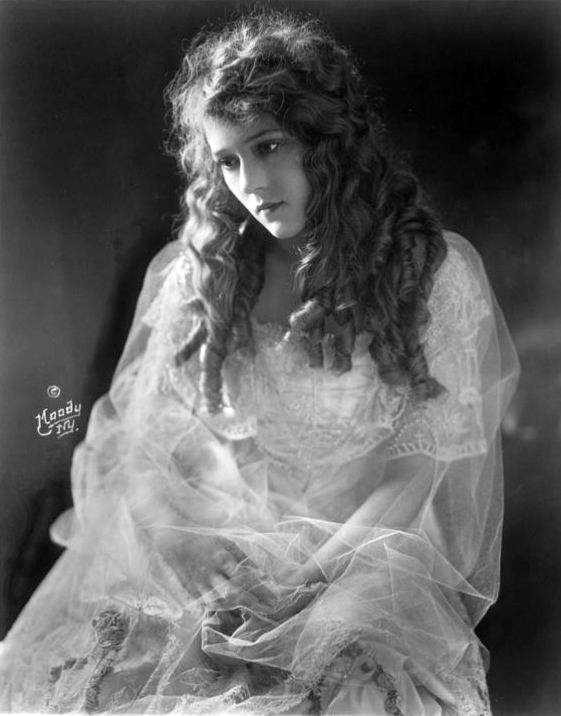 After retiring from the screen, Pickford became an alcoholic, as her father had been. Her mother Charlotte died of breast cancer in March 1928. Her siblings, Lottie and Jack, both died of alcohol-related causes. These deaths, her divorce from Fairbanks, and the end of silent films left Pickford deeply depressed. Her relationship with her children, Roxanne, and Ronald was turbulent at best. Pickford withdrew and gradually became a recluse, remaining almost entirely at Pickfair and allowing visits only from Lillian Gish, her stepson Douglas Fairbanks, Jr., and few other people. She appeared in court in 1959, in a matter pertaining to her co-ownership of North Carolina TV station WSJS-TV. The court date coincided with the date of her 67th birthday; under oath, when asked to give her age, Pickford replied, “I’m 21, going on 20”.

« The giant heads of Easter Island, do have bodies, landslides have covered them up
Launched on 31st January 1966, Luna 9 was the first spacecraft to transmit photographic data from the Moon’s surface to Earth »