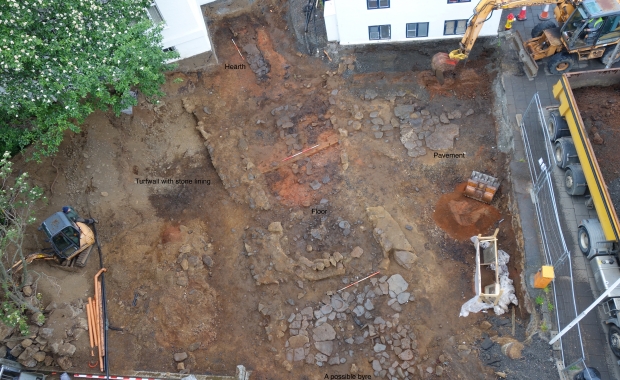 Not too long ago, researchers and archaeologists on an archaeological dig found something quite amazing in Iceland.  The team was digging under a parking lot by Lækjargata Street in downtown Reykjavik when they found one of the largest Viking longhouses ever discovered in Iceland.  The team has decided to make those ruins into a new exhibition for the public.

However, there has been a major setback in the exhibition project; a new hotel was originally going to be built there.  Now that there is a known historical site on the land, the team has a suggestion for protecting the longhouse.  There has been one idea that could satisfy both sides in the matter – the hotel could change its design so that the longhouse would be visible from the inside of the hotel from the sidewalk, and available for passersby to view.

One of the archaeologists on the site, Lísbet Guðmundsdóttir, said that all non-organized artifacts will be preserved on the site.  The turf, however, will not be preserved because she said it was already well intact and would be too costly to deal with.

The most amazing part of the find is that there were no historical documents stating that there was ever any kind of Viking settlements in that area.  Historians and archaeologists are now a few steps closer to understanding the Vikings who settled in Reykjavik. 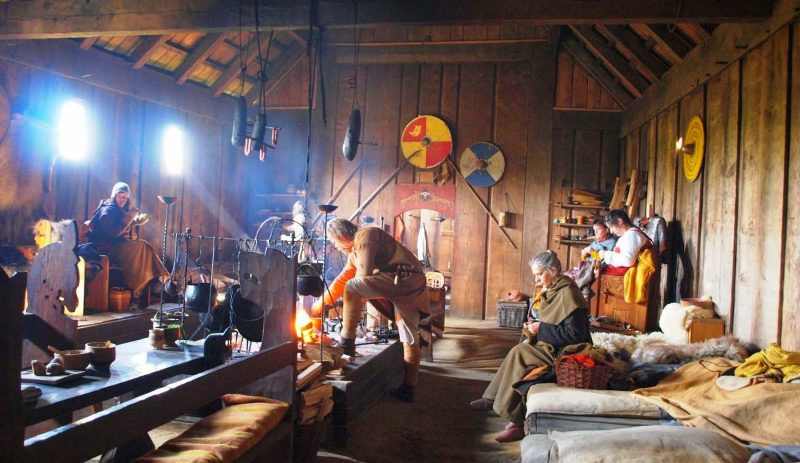 Sadly, archaeologists won’t be able to find out just how big the longhouse is due to the fact that a part of it was destroyed during modern construction years ago, most likely because the construction workers had no idea they were touching centuries-old artifacts.  Archaeologists do believe that the longhouse extended under houses to the north and into the middle of Skólabrú Street.

Lísbet said that the archaeologists on her team will map out the missing chunks of the longhouse.  This way, people who travel to view it might get a better understanding of just how large the longhouse was.  They have decided to preserve the fireplace and trough, which will be left where they were originally built; the outlines of the longhouse will also be preserved.

Longhouses were generally used in the Northern lands of Iceland.  A typical longhouse was usually anywhere between 16 to 23 feet wide and 50 to 250 feet long. The bigger the house, the wealthier the homeowners.  A larger house generally stated the owner’s social position.

In the Norse region, the longhouses were generally built on a wooden frame above stone footings.  The walls were then created out of planks, logs, wattle, or daub. In regions where there was not enough wood, the longhouses would be built out of turf.

Inside, a long house was divided into several rooms.  Two rows of posts ran down the length of the house in order to support the roof beams.  Those columns divided each room into three long aisles. They provided the support for the roof, which resulted in the walls not being able to support much weight.  Because the roof was supported by beams instead of wall, a lot of times the walls started bowing at the center, which made the longhouse wider in the center and ends.

The center of each room had packed dirt on the floor.  The ashes from the fires were then spread on the area to act as an absorbent.  All homes back then had a place for a fire; either all rooms had a small one in the middle of the room or there were fire pits that ran lengthwise.

A majority of the houses had stone hearth compartments that archaeologists believe were used for keeping food or other valuables warm.  The small holes also could have been used for tools or fire tools for cooking. One house that was excavated years ago had a hole lined with stones and archaeologists believe that the Vikings may have had a garbage can of sorts.  Other holes that were found had gold jewelry in them, as if it got lost and ended up being kicked into the garbage accidentally.

In order to keep the fires inside, the houses had to have some kind of chimney.  These were also called smoke holes, and they provided the ventilation for the smoke to escape.  They also proved to be a source of light; if there were no windows, people relied on the smoke hole or having to open the door to see anything inside.  Other houses might have had small openings that were covered with animal membranes, allowing more light to get through.  Other light could be provided by a simple lamp made from available materials.  One lamp that was found on a site was made from a dished stone filled with fish liver oil.  A common weed found nearby the houses was used as a wick.

In each house there were two benches on both sides of the house that were generally used for eating, sitting, working, or even sleeping.

Each house seems as though it would have been quite cozy for the time.  The Vikings came with great tools and made themselves livable homes complete with beds, chimneys, fireplaces, and garbage cans.