The Iron Hand of a Mercenary: Made for a 16th century German knight

Götz von Berlichingen, also known as Götz of the Iron Hand, was a famous German mercenary knight employed by the lords and kings of the time to do their bidding.

He was active in numerous campaigns during a period of 47 years (1498–1544), including the German Peasants’ War, besides numerous feuds; in his autobiography he estimates that he fought 15 feuds in his own name, besides many cases where he lent assistance to friends, including feuds against the cities of Cologne, Ulm, Augsburg and the Swabian League, as well as the Bishop of Bamberg. 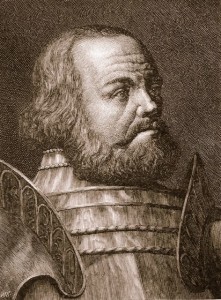 In 1504, while fighting in the siege of the southeast German town of Landshut in the name of Albert IV, the Duke of Bavaria, the 23-year-old Berlichingen was hit by an enemy cannonball. He had two mechanical prosthetic iron replacements made, which are today on display at the Jagsthausen Castle. 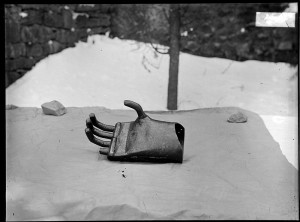 Most iron hands are based on the same constructive principles, although there are considerable differences in complexity. Fingers can be flexed passively (for example using the healthy hand) and are locked in place by a ratchet mechanism, similar to those of contemporary flintlocks. Extension of the fingers works by spring pressure. 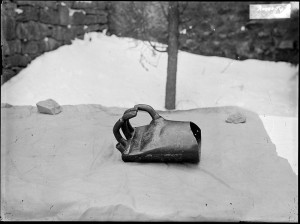 The first hand had two hinges at the top of the palm allowed the four hook-like fingers to be brought inward for sword-holding purposes. source

The first hand was a basic affair. Two hinges at the top of the palm allowed the four hook-like fingers to be brought inward for sword-holding purposes, but that was the extent of its motion. There was some attention paid to aesthetic detail, though, including sculpted fingernails and wrinkles at the knuckles. 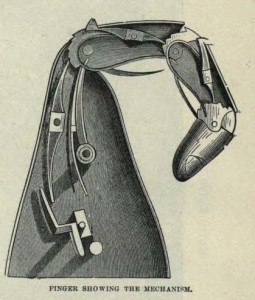 The second, more famous prosthetic hand was capable of holding objects from a shield or reins to a feather pen. The hand extended to the end of his forearm and was secured with a leather strap, was “a clumsy structure, but an ingenious one,” according to the American Journal of Surgery. 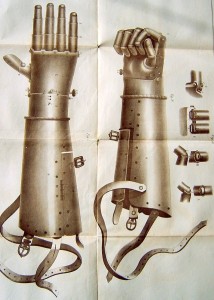 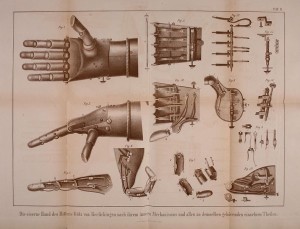 A 19th-century engraving shows the inner workings of the second iron hand. source 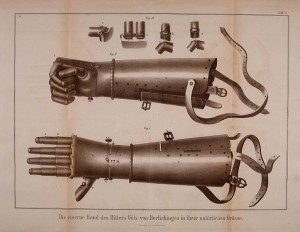 The second hand is a rare example of a 16th-century prosthetic limb. source

The second iron hand circa 1514. source

The second hand on display at the Jagsthausen Castle. source

The second hand was equipped with joints at each knuckle and spring-loaded mechanisms to lock fingers into place. source

In spite of this injury, “Götz of the Iron Hand” continued his military activities. In the subsequent years, he was involved in numerous battles, both of his own and in support of friends and employers.

« Oh, so thats how they used to build locomotives
The moon landings were faked! Over 10,000 images from the Apollo Moon mission say otherwise… »