Thanks to sonar technology archaeologists, historians, and researchers have been able to discover archaeological sites and shipwrecks. However, these pieces of sonar equipment don’t come cheap, which is a real tragedy for scientific discovery. 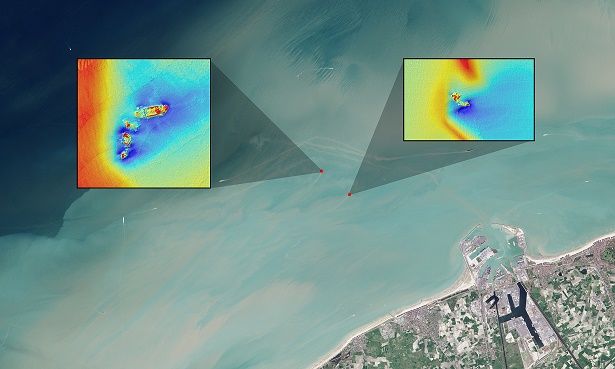 Thanks to Matthias Baeye and Michael Fettweis, along with several other team members, a low-cost way to detect shipwrecks that are close to shore has been developed. The men work for the Royal Belgian Institute of Natural Sciences and have coordinated with Rory Quinn of Ulster University, Samuel Deleu of Flemish Hydrography, and the Agency for Maritime Coastal Services.

They used free, available Landsat satellite data and tidal models in order to follow sediment plumes which extend from four known wreck locations near the Belgium port of Zeebrugge.

The wrecks have been recorded in a multi-beam echosounder survey which was conducted by the Flemish government. It found exposed parts of two shipwrecks that had collected sediment during the slack tides. The sediment was then re-suspended during the flood tides, which created the sediment plumes which could be traced when they reached the surface. The researchers on the project said that the uncharted shipwrecks could be found by mapping the sediment plumes and following them upstream to the area where they originated.

Here are the top five ancient ships that were found by using sonar technology. There are many more where they came from:

This ship was found by divers who were mapping submerged caves in Mexico’s Eastern Yucatan Peninsula near the city of Tulum. They came across a nearly complete skeleton of this ship and that of a young girl. This is actually the first ship of its kind ever found in the Americas and dates back to around 12,000 to 13,000 years old.

During an excavation at the port of Urla’s underwater archaeological site in Turkey, a 4,000-year-old sunken ship was revealed. It is currently the oldest known shipwreck found in the Mediterranean and one of the oldest known shipwrecks worldwide. The port served as an ancient Greek settlement of Klazomenai and sunk due to natural disaster, probably an earthquake, in the 8th century BC. Many sunken ships have been found in the area, ranging from the 2nd century BC to the Ottoman period.

This ship was discovered by marine archaeologists – it dates back nearly 13,800 years and was found near the Haida Gwaii Archipelago in British Columbia, Canada. The site had consisted of a stone weir (a man-made channel used to corral fish).

What many people thought was a myth turned out to be true. On September 6, Canada’s Prime Minister, Stephen Harper, announced that a lost ship of Sir John Franklin’s expedition had been found off Hat Island, southwest of King William Island. The HMS Erebus and Terror that sailed from England in the summer of 1845 were aiming to chart the Northwest Passage. They disappeared in the Canadian Arctic; stranded on King William Island in the summer of 1846, the ships were abandoned by the surviving officers and men. There were no survivors after the spring of 1848. One ship was found  sitting upright on the seabed – the vessel almost intact, with only the masts missing.

This was the first underwater exploration of its kind. Greek and international divers and archaeologists used a new exosuit in order to reach the deep waters of the worldwide-known Antikythera wreck that had been there for 2,000 years. What the divers found was that the ship had survived the depths well for the centuries it had remained undiscovered. They excavated whatever goods and artifacts they could, such as tableware and a bronze spear. In September 2014, the divers created a high-resolution 3D map of the site. Most of the ship’s cargo were well-preserved beneath the sediment.

« Kindertransport- the desperate effort to save the Jewish children from Holocaust
Hitler’s father was born nearby. Is this why it has been abandoned since WWII? »