Filmed in 1905, this is a very rare footage of Cricket 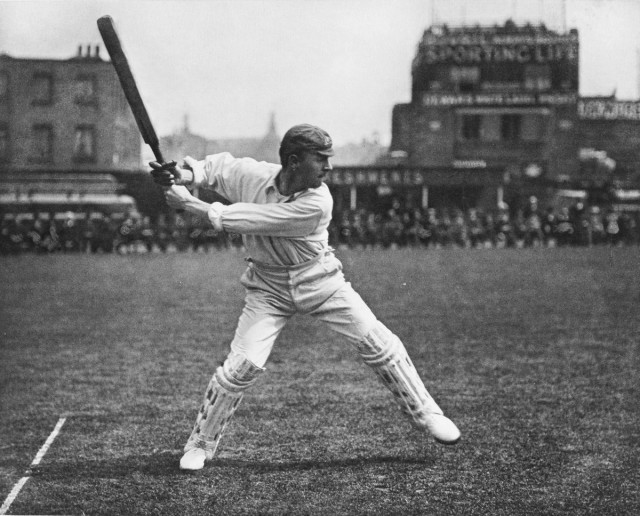 Cricket is generally believed to have been first played in southern England in the 16th century. By the end of the 18th century, it had become the national sport of England. The expansion of the British Empire led to cricket being played overseas and by the mid-19th century the first international match was held. ICC, the game’s governing body, has 10 full members. The game is most popular in Australasia, England, the Indian subcontinent, the West Indies and Southern Africa. 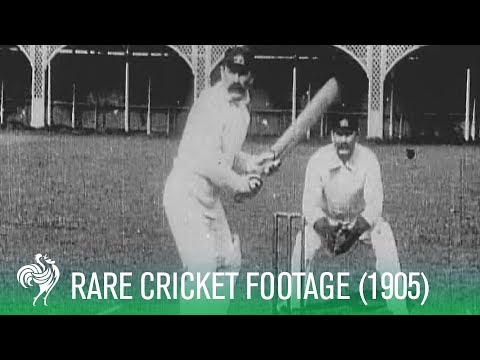 Early cricket was at some time or another described as “a club striking a ball (like) the ancient games of club-ball, stool-ball, trap-ball, stob-ball”.[14] Cricket can definitely be traced back to Tudor times in early 16th-century England.

Written evidence exists of a game known as creag being played by Prince Edward, the son of Edward I (Longshanks), at Newenden, Kent in 1301[15] and there has been speculation, but no evidence, that this was a form of cricket.

The earliest written evidence of the game of cricket may date back to France, in a letter written to King Louis XI in 1478, by a man named Estiavannet. He described a game being played by the villagers of Liettres (French Flanders) involvingboules (balls) and croquet (a wooden post).[16][17] However this could have been a different game entirely, such as croquet. The earliest definite reference to cricket being played dates back to evidence given at a 1598 court case which mentions that “creckett” was played on common land in Guildford, Surrey, around 1550. The court in Guildford heard on Monday, 17 January 1597 (Julian date, equating to the year 1598 in the Gregorian calendar) from a 59-year-oldcoroner, John Derrick, who gave witness that when he was a scholar at the “Free School at Guildford”, fifty years earlier, “hee and diverse of his fellows did runne and play [on the common land] at creckett and other plaies.”

It is believed that it was originally a children’s game but references around 1610[19] indicate that adults had started playing it and the earliest reference to inter-parish or village cricket occurs soon afterwards. In 1624, a player called Jasper Vinall was killed when he was struck on the head during a match between two parish teams in Sussex.

During the 17th century, numerous references indicate the growth of cricket in the south-east of England. By the end of the century, it had become an organised activity being played for high stakes and it is believed that the first professionals appeared in the years following the Restoration in 1660. A newspaper report survives of “a great cricket match” with eleven players a side that was played for high stakes in Sussex in 1697, and this is the earliest known reference to a cricket match of such importance.

The game underwent major development in the 18th century and became the national sport of England. Betting played a major part in that development with rich patrons forming their own “select XIs”. Cricket was prominent in London as early as 1707 and large crowds flocked to matches on the Artillery Ground in Finsbury. The single wicket form of the sport attracted huge crowds and wagers to match.

In the 1730s Frederick Prince of Wales played a major role in developing the sport.[21] Bowling evolved around 1760 when bowlers began to pitch the ball instead of rolling or skimming it towards the batsman. This caused a revolution in bat design because, to deal with the bouncing ball, it was necessary to introduce the modern straight bat in place of the old “hockey stick” shape.

The Hambledon Club was founded in the 1760s and, for the next 20 years until the formation of MCC and the opening of Lord’s Old Ground in 1787, Hambledon was both the game’s greatest club and its focal point. MCC quickly became the sport’s premier club and the custodian of the Laws of Cricket. New Laws introduced in the latter part of the 18th century included the three stump wicket and leg before wicket (lbw). The 19th century saw underarm bowling replaced by first roundarm and then overarm bowling. Both developments were controversial.

Organisation of the game at county level led to the creation of the county clubs, starting with Sussex CCC in 1839, which ultimately formed the official County Championship in 1890. Meanwhile, the British Empire had been instrumental in spreading the game overseas and by the middle of the 19th century it had become well established in India, North America, the Caribbean, South Africa, Australia and New Zealand. In 1844, the first international cricket match took place between the United States and Canada (although neither has ever been ranked as a Test-playing nation, cricket was the most popular team sport in America until its displacement by baseball in the 1860s).

In 1859, a team of England players went on the first overseas tour (to North America). The first Australian team to tour overseas was a team of Aboriginal stockmen who travelled to England in 1868 to play matches against county teams.[22] In 1862, an English team made the first tour of Australia and in 1876–77, an England team took part in the first-ever Test match at the Melbourne Cricket Ground against Australia. W.G. Grace started his long career in 1865; his career is often said to have revolutionised the sport.[23] The rivalry between England and Australia gave birth to The Ashes in 1882 and this has remained Test cricket’s most famous contest