Filmed in 1902, this is the earliest known footage of Hanoi, Vietnam 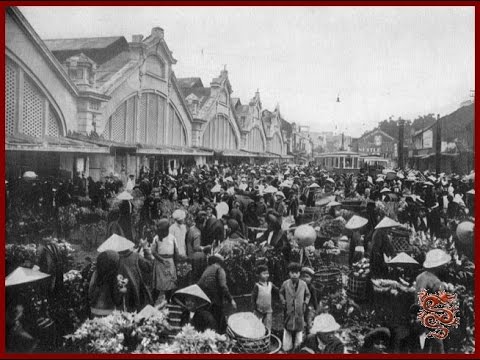 Hanoi has been inhabited since at least 3000 BC. The Cổ Loa Citadel in Dong Anh district served as the capital of the Âu Lạc kingdom founded by the Shu emigrant Thục Phán after his 258 BC conquest of the native Văn Lang.

In 197 BC, Âu Lạc Kingdom was annexed by Nanyue, which ushered in more than a millennium of Chinese domination. By the middle of the 5th century, in the center of ancient Hanoi, the Liu Song Dynasty set up a new district (縣) called Songping (Tong Binh), which later became a commandery (郡), including two districts Yihuai (義懷) and Suining (綏寧) in the south of the Red River (now Từ Liêm and Hoài Đức districts) with a metropolis (the dominant centre) in the present inner Hanoi. By the year 679, the Tang dynasty changed the region’s name into Annan (Pacified South), with Songping as its capital.

In order to defeat the people’s uprisings, in the later half of the 8th century, Zhang Boyi (張伯儀), a Tang dynasty viceroy, built Luocheng (羅城, La Thanh or La citadel, from Thu Le to Quan Ngua in present-day Ba Dinh precinct). In the earlier half of the 9th century, it was further built up and called Jincheng (金城, Kim Thanh or Kim Citadel). In 866, Gao Pian, the Chinese Jiedushi, consolidated and named it Daluocheng (大羅城, Dai La citadel, running from Quan Ngua to Bach Thao), the then-largest citadel of ancient Hanoi.

In 1010, Lý Thái Tổ, the first ruler of the Lý Dynasty, moved the capital of Đại Việt to the site of the Đại La Citadel. Claiming to have seen a dragon ascending the Red River, he renamed the site Thăng Long (, “Soaring Dragon”) – a name still used poetically to this day. Thăng Long remained the capital of Đại Việt until 1397 when it was moved to Thanh Hóa, then known as Tây Đô , the “Western Capital”. Thăng Long then became Đông Đô , the “Eastern Capital.”

In 1408, the Chinese Ming Dynasty attacked and occupied Vietnam, changing Đông Đô’s name to Dongguan (Eastern Gateway), or Đông Quan in Sino-Vietnamese. In 1428, the Vietnamese overthrew the Chinese under the leadership of Lê Lợi,[who later founded the Lê Dynasty and renamed Đông Quan Đông Kinh (東京, “Eastern Capital”) or Tonkin. Right after the end of the Tây Sơn Dynasty, it was named Bắc Thành (“Northern Citadel”).

In 1802, when the Nguyễn Dynasty was established and moved the capital to Huế, the old name Thăng Long was modified to become Thăng Long  “Soaring Dragon”). In 1831, the Nguyễn emperor Minh Mạng renamed it Hà Nội “Between Rivers” or “River Interior”). Hanoi was occupied by the French in 1873 and passed to them ten years later. As Hanoï, it became the capital ofFrench Indochina after 1887.

The city was occupied by the Imperial Japanese in 1940 and liberated in 1945 when it briefly became the seat of the Viet Minh government after Ho Chi Minh proclaimed the independence of Vietnam. However, the French returned and reoccupied the city in 1946. After nine years of fighting between the French and Viet Minh forces, Hanoi became the capital of an independent North Vietnam in 1954.

During the Vietnam War, Hanoi’s transportation facilities were disrupted by the bombing of bridges and railways. These were all, however, promptly repaired. Following the end of the war, Hanoi became the capital of a reunified Vietnam when North and South Vietnam were reunited on July 2, 1976.

On May 29, 2008, it was decided that Hà Tây Province, Vĩnh Phúc Province’s Mê Linh District and 4 communes of Lương Sơn District, Hòa Bình Province be merged into the metropolitan area of Hanoi from August 1, 2008.Hanoi’s total area then increased to 334,470 hectares in 29 subdivisions with the new population being 6,232,940., effectively tripling its size. The Hanoi Capital Region(Vùng Thủ đô Hà Nội), a metropolitan area covering Hanoi and 6 surrounding provinces under its administration, will have an area of 13,436 square kilometres (5,188 sq mi) with 15 million people by 2020

Hanoi has experienced a rapid construction boom recently. Skyscrapers, popping up in new urban areas, have dramatically changed the cityscape and have formed a modern skyline outside the old city. In 2015, Hanoi was ranked # 39 by Emporis in the list of world cities with most skyscrapers over 100 m; its two tallest buildings are Hanoi Landmark 72 Tower (336m, tallest in Vietnam and second tallest in south-east Asia after Malaysia’s Petronas Twin Towers) and Hanoi Lotte Center (272m, also second tallest in Vietnam).