Regarded as the archetype of the bicycle, the Dandy Horse provided cheap and efficient transport for the masses

A human-powered vehicle that, being the first means of transport to make use of the two-wheeler principle, the dandy horse is regarded as the archetype of the bicycle. It was invented by Baron Karl Drais in Mannheim, Germany, and patented in France in February 1818 (Badenian privilege in January 1818). It is also known as a Laufmaschine (Drais’ own terminology, German for “running machine”), the official designation velocipede, or draisine (a term now used primarily for light auxiliary railcars regardless of their form of propulsion), and in its French form draisienne. 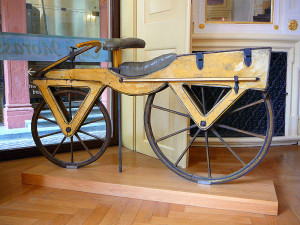 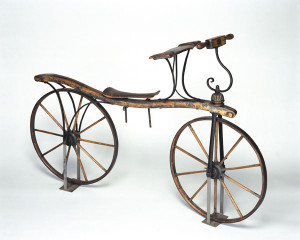 The ‘dandy horse’ was the forerunner of the bicycle and was invented by the German Baron Karl von Drais in France in 1817. source

The dandy horse was a two-wheeled vehicle, with both wheels in-line, propelled by the rider pushing along the ground with the feet as in regular walking or running. 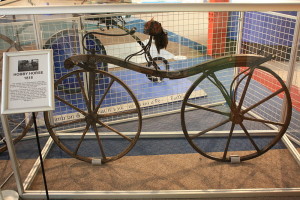 When this machine was built there were no pedals or chains to use. Instead, the rider had to move the vehicle forward with their legs while steering with their arms. The Hobby Horse could reach speeds of 8mph and had no brakes, so riding down hills could be very dangerous.” Coventry Transport Museum, UK. 2009. source 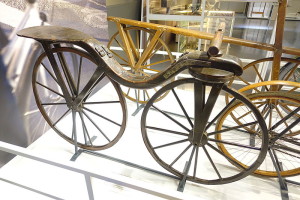 The front wheel and handlebar assembly were hinged to allow steering. source

During its brief popularity in the summer of 1819, several manufacturers in France and England made their own dandy-horses—most notably Denis Johnson of London, who used an elegantly curved wooden frame which allowed the use of larger wheels. Riders preferred to operate their vehicles on the smooth sidewalks instead of the rough roads, but their interactions with pedestrians caused many municipalities worldwide to enact laws prohibiting their use. Later designs avoided the initial drawback of this device when it had to be made to measure, manufactured to conform with the height and the stride of its rider. An example is Nicéphore Niépce’s 1818 velocipede with an adjustable saddle for his ‘velocipede’ built by Lagrange. 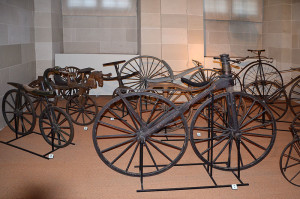 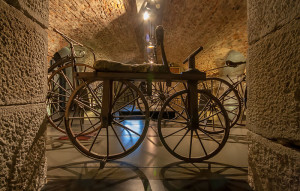 The bicycle has become so ubiquitous that it’s difficult to imagine a time before it provided cheap, efficient transport for the masses. source

The success of the hobby horse was short-lived. Draisines were heavy and difficult to ride and the two-wheeled novelty vanished from many European roads again. Safety was an issue, too: Apart from cranks and pedals, many Draisiennes also lacked a brake. Since road conditions were abysmal, many riders simply rode on the sidewalk – with unhappy results. Apparently there were frequent collisions with unsuspecting pedestrians, and after a few years, Drais’ invention was banned in many European and American cities. And a third reason for the draisine’s speedy demise seems to have been that the general public greeted the new invention with considerable hostility.

However, in the 1860’s in France, the vélocipède bicycle was created by attaching rotary cranks and pedals to the front wheel hub of a dandy-horse.