A wedding gown should be more than a white dress, it should  hold some sentimental value and represent something. So, not long ago we found a  photo of a wedding gown that not only has a huge sentiment behind it but the story that this seemingly normal wedding dress tells is beyond words.

This is the story of  a parachute that saved a life, was used as a wedding ring and ended as the most beautiful wedding gown.

Back in 1944, during the last years of the World War II, a young American B-29 pilot, Maj Claude Hensinger was just returning with his crew from a bombing raid over Yowata, Japan when their engine caught fire.

Hensinger and the crew were forced to bail out of the bomber. It was a dark when Major Hensinger and his crew bailed out. The Major had a hard landing as he had landed on rocks but luckily, he suffered minor injuries. The night was cold and Hensinger used the parachute as a pillow and a blanket. With luck, the next morning a friendly Chinese man took the crew to safety. 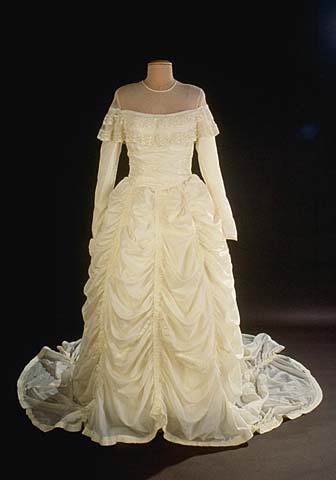 Major Hensinger safely returned home to the United States, but he didn’t forget to keep the lucky parachute, that both saved his life and kept him warm during the cold night in China. The parachute was a memento of his lucky stars that night.

After he returned home, he started to date a lady friend whom he knew since childhood, Ruth. After one year of dating, Major Hensinger proposed to Ruth,  but instead of a ring, he kneeled down and gave her the parachute, that same piece of chute fabric that was the only thing between life and death for Claude.

He said, ‘This is the parachute that saved my life. I want you to make a wedding gown out of it,’” said Ruth.

Ruth was merely shocked and overwhelmed by the colossal size of the parachute “I thought to myself, ‘How am I going to make a gown out of 16 gores of nylon and all that bias?’” she said.

But then she  thought how Scarlet O’Hara from Gone With the Wind made a flamboyant dress from a curtain and after seeing a dress in a store window based on one that appeared in the movie she patterned her dress after that. She hired  Hilda Buck, a local seamstress to make the bodice and veil while the skirt was made by Ruth. To make the dress shorter in the front and have a train in the back she pulled up the strings on the parachute. 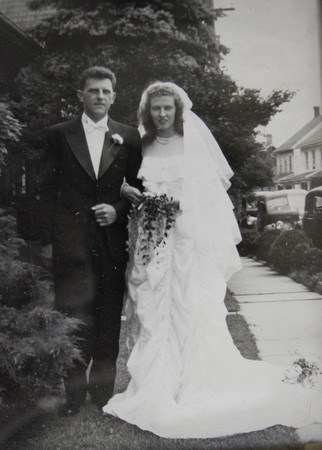 Maj. Claude and Ruth Hensinger on their wedding day in 1947. Photo via South Whitehall Patch.

On July 19, 1947, in Neffs Luther Church in Pensylvania, Ruth walked down the aisle and Major Claude Hensinger once again saw his old friend, the parachute that saved his life in a form of a mesmerizing wedding gown worn by his bride to be.

“My husband didn’t see the gown until I walked down the aisle,” she says. “He was happy with it.”

Twenty-five years later, the parachute gown shined once again down the aisle, by Ruth and Claude’s daughter and then again by their daughter in law. 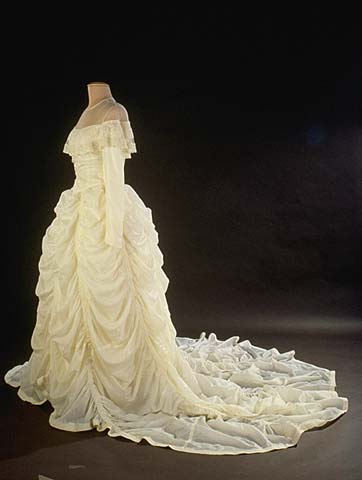 In the early 1990s, Ruth found out that the Smithsonian Institution was searching for artifacts made from World War II- parachutes. She instantly contacted a curator, who asked her to send the gown to the museum.

Without a doubt, Ruth sent the lucky parachute gown to the museum:  “What was I going to do with it? I don’t have granddaughters to wear it,”